I had the privilege of attending the NGO Monitor Conference on the Future of the ICC which took place at Bar Ilan University on Monday. (Update: I have inserted the improved-quality video of the debate below). 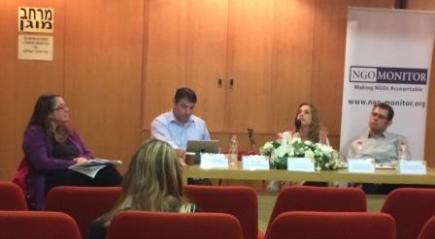 The Jerusalem Post has a short overview of the debate but it does not do it full justice in my humble opinion. Here are the highlights:

The panel discussion – sponsored by NGO Monitor and the university – was highly skeptical overall of how the ICC would treat Israel, though at least one panelist advocated informal cooperation as a tactic for reducing the risk of prosecution for alleged war crimes.

After recognizing “Palestine” as a state in January 2015, the ICC prosecutor opened a preliminary examination of alleged war crimes related to the 2014 Gaza war and to the settlement enterprise.

Despite Israel’s vehement protest of the ICC’s Palestine decision, it eventually decided in July 2015 to cooperate informally on jurisdiction issues, including an October visit to the region by members of the ICC prosecutor’s staff.

The ICC prosecutor still has not decided whether to move from an examination to a full criminal investigation.

According to Northwestern Professor and Kohelet Policy Forum lawyer Eugene Kontorovich, “The ICC is not an all-powerful forum of international justice, but rather a politically weakened institution that has had numerous countries quit its membership in recent months. Perhaps it is true justice that real countries began quitting the ICC shortly after it accepted a non-country – Palestine.”

Kontorovich opposed continued cooperation. He said Israel could make its arguments against jurisdiction through NGOs and other third parties.

He added that it was problematic to cooperate with the ICC as long as it recognizes Palestine as a state, and that the Palestinians should be pressured to withdraw their membership from the ICC as some African countries are in the process of doing.

In contrast, former IDF International Law Department and Institute for National Security Studies legal director Pnina Sharvit Baruch said, “I think it is taking too great a risk not to cooperate. There is no proof yet that the court will be clearly political. But we have good arguments and Israel should present them” to try convincing the ICC to back off.

NGO Monitor legal adviser Anne Herzberg expressed concern. “The Office of the Prosecutor appears to be repeating many of the mistakes of other international organizations investigating armed conflict by heavily relying on the unverified claims of a narrow sector of political advocacy NGOs,” she said. “In the case of the investigation of the Gaza War, this narrow sector consists almost exclusively of NGOs promoting the Palestinian narrative. If the ICC wishes to be viewed as credible… the prosecutor must end this practice.”

Looking back at how the ICC was formed, NGO Monitor president and Bar-Ilan Prof. Gerald Steinberg said: “Clearly the ICC is a political body as much as it is a legal body. NGOs, such as Amnesty International and Human Rights Watch are seeking to use this human rights framework as part of political lawfare, demonization of Israel… and war crimes allegations.”

Arguing that the court often uses political rather than legal definitions, including broad interpretations of occupation and settlement activity, Bar-Ilan University and University of San Diego Prof. Avi Bell noted, “When the crime has expanded to everything, we are all criminals.”

No panel members came from the Left end of the political spectrum in terms of alleging war crimes by Israel.

UPDATE: Here is the very much improved quality video:

Luckily I also audio recorded most of the discussion, and I post below the salient points of the debate. These centered around the question, asked by Makor Rishon journalist Ariel Kahana, whether  it is in Israel’s interest to cooperate with the ICC or not, even though it is not a member of the ICC.

First to answer was Penina Sharvit Baruch, who took a generally more lenient attitude towards the ICC throughout the debate:

She was followed by Prof. Eugene Kontorovich who disagreed with her:

But the strongest advocate for non-cooperation was Prof. Avi Bell who was very vehement in his opposition to any coopertion with the ICC for a number of rather worrying reasons:

Avi Bell also noted a remarkable fact which ought to give us all pause for thought. With all the debates and discussions within Israeli society, the media and politics, the only people ever targeted by the BDS or similar organizations like the ICC have been leftists – precisely the ones who advocate restraint, concessions and cooperation with the hostile international lawfare organizations.  He listed in particular Ami Ayalon and Tzipi Livni, both of whom were hounded by BDS: Ayalon was not permitted to give his speech in London University, and Livni had an arrest warrant issued against her in London.

This goes to prove the point that Israeli concessions are viewed as weakness, which then only gives these NGOs more appetite to go after Israelis – but again, only those Israelis which showed weakness in the first place.

There are very important lessons to be extrapolated from these incidents. Our politicians should be taking heed and hopefully learning from NGO Monitor’s experience.

15 Responses to NGO Monitor Conference on the ICC – to cooperate or not to cooperate? (Updated)