Trump’s inauguration and the bad losers of the Left 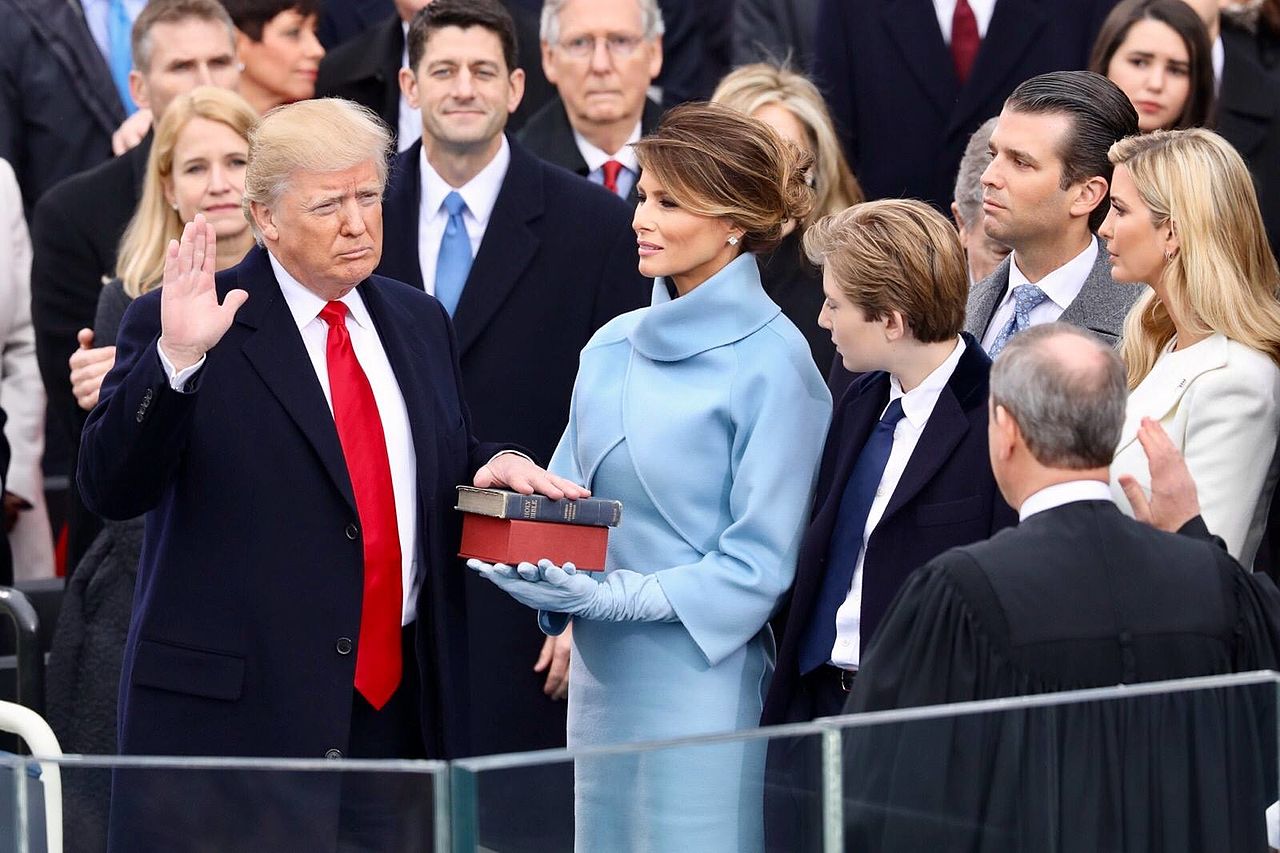 President Donald Trump’s inauguration took place on Friday accompanied by huge crowds of supporters, and – unusually – large and some violent anti-Trump demonstrations. The depth of the hatred for Trump has not surprised me but one would have thought that people would have gotten over their anger and accepted the will of the people expressed at the ballot box.

But it seems that the Leftists of today, having been coddled by the nanny state, with politically correct rules for  protecting students against “triggering” situations, and the promotion of identity politics over merit, do not know how to handle a result that goes against their wishes.

What we saw in those demonstrations was a display of malice, ill-will, and a sinister undertone of violence that bodes ill for America if allowed to fester.

Legal Insurrection covered some of the demonstrations. Rioters pitch massive tantrum during inauguration:

NO ONE IS SAFE FROM THE MOB:

And then there was tear gas:

Besides the riots there were a series of feminist anti-Trump demonstrations which protested Trump’s reported misogyny, or at least his very inappropriate comments and attitudes about women. These demonstrations in themselves would be perfectly acceptable – until you examine who their sponsors and organizers were, and then the picture turns into something much less balanced.

One of the main organizers was Linda Sarsour, about whom Israellycool had this to say:

If you are a woman wanting to protest against Trump, go for it.

I’ll leave aside for a second the fact I do not recall any similar march protesting the disgraceful treatment of women in parts of the Muslim world.

Just be aware of the these things about Linda Sarsour, one of the main organizers of your march.

1. She wants everyone to live under Sharia law.

You'll know when you're living under Sharia Law if suddenly all your loans & credit cards become interest free. Sound nice, doesn't it?

2. She is not happy “22 states” have banned Sharia, and claims Muslim kids are being executed in the US.

4. She posed for a picture with Salah Sarsour, a member of the Islamic Society of Milwaukee and former Hamas operative who was jailed in Israel because of alleged work for Hamas.

In an article written, astonishingly enough by a Muslim woman, it turns out that more than 50 partners of the the massive Women’s March have ties to none other than our old “friend”, the subversive extreme leftist George Soros: (emphases are mine):

… the march really isn’t a “women’s march.” It’s a march for women who are anti-Trump.

By my draft research, which I’m opening up for crowd-sourcing on GoogleDocs, Soros has funded, or has close relationships with, at least 56 of the march’s “partners,” including “key partners” Planned Parenthood, which opposes Trump’s anti-abortion policy, and the National Resource Defense Council, which opposes Trump’s environmental policies. The other Soros ties with “Women’s March” organizations include the partisan MoveOn.org (which was fiercely pro-Clinton), the National Action Network (which has a former executive director lauded by Obama senior advisor Valerie Jarrett as “a leader of tomorrow” as a march co-chair and another official as “the head of logistics”). Other Soros grantees who are “partners” in the march are the American Civil Liberties Union, Center for Constitutional Rights, Amnesty International and Human Rights Watch. March organizers and the organizations identified here haven’t yet returned queries for comment.

On the issues I care about as a Muslim, the “Women’s March,” unfortunately, has taken a stand on the side of partisan politics that has obfuscated the issues of Islamic extremism over the eight years of the Obama administration. “Women’s March” partners include the Council on American-Islamic Relations, which has not only deflected on issues of Islamic extremism post-9/11, but opposes Muslim reforms that would allow women to be prayer leaders and pray in the front of mosques, without wearing headscarves as symbols of chastity. Partners also include the Southern Poverty Law Center (SPLC), which wrongly designated Maajid Nawaz, a Muslim reformer, an “anti-Muslim extremist” in a biased report released before the election. The SPLC confirmed to me that Soros funded its “anti-Muslim extremists” report targeting Nawaz. (Ironically, CAIR also opposes abortions, but its leader still has a key speaking role.)

Another Soros grantee and march “partner” is the Arab-American Association of New York, whose executive director, Linda Sarsour, is a march co-chair. When I co-wrote a piece, arguing that Muslim women don’t have to wear headscarves as a symbol of “modesty,” she attacked the coauthor and me as “fringe.”

Much like post-election protests, which included a sign, “Kill Trump,” were not  “spontaneous,” as reported by some media outlets, the “Women’s March” is an extension of strategic identity politics that has so fractured America today, from campuses to communities. On the left or the right, it’s wrong. But, with the inauguration, we know the politics. With the march, “women” have been appropriated for a clearly anti-Trump day.

The blogger Lex who writes at Israellycool expressed similar misgivings about the Women’s March, wondering with whom they are hitching a ride despite her extreme dislike of Donald Trump:

However, I was embarrassed by the behavior of over 2.9 million of my fellow social progressives at the American Women’s March, which replicated itself with other satellite solidarity marches across the world, including one in Tel Aviv. I think the whole concept of the march was silly and melodramatic, and reeked of entitlement that the left built up after being coddled and nourished by Obama for so many years. It also appeared to me as a giant temper tantrum of young children who didn’t get their way in a fair democratic process. There are three major reasons I refused to show any solidarity with the marchers, despite the fact that many of my close friends participated, that I agree on many of their appraisals of the situation, and that I share many of their worries and concerns regarding how Trump will treat his most marginalized and downtrodden citizens.

The Girls Who Cried Wolf

One of the biggest reasons why I am worried, and why I see these protests proof of a gigantic sense of entitlement the left has nurtured and abetted for many years, is because Trump hasn’t actually done anything objectionable yet as president.

These women are protesting Trump because he was elected and they don’t like him.

To any outsider, they seem to be behaving like spoiled brats used to always getting what they want, throwing a tantrum when they didn’t win after a fair process.

…But What About The Other Scumbag Presidents?

… John F. Kennedy, Bill Clinton, and even the much-loved FDR (Franklin D. Roosevelt), had presidencies racked by numerous affairs and cheating scandals, yet went down in history as arguably among the best presidents to ever take office, at least in the 20th century. So no, even if he has a weakness for women and can’t maintain a relationship without being a jerk, that doesn’t mean he will make a bad president.

I was very skeptical when I found out that community activist and noted Israel-hater Linda Sarsour was running the movement. Sarsour is a proud Palestinian pro-Sharia Law activist who pretends to be a progressive and uses her charm to endear progressives to the highly regressive Sharia Law (yes, she is probably a genius if she can do that, I’ll give her that).

Throughout her speech at the women’s march, Sarsour injected some pretty subliminal anti-Israel messaging, as did activist Angela Davis and others. There was also some subliminal Islamic proselytizing going on, with a station where march participants were fitted with American flag hijabs. Such an outcome didn’t surprise me in the slightest given Sarsour’s past behaviour and evident agenda. So no, I don’t want anything to do with her or her activism, because I always know that her end goal is to undermine Israel and popularize the anti-Israel movement, which she did empowered under Obama’s mentorship.

Any self-respecting Jew should steer clear of her and anything she is involved in as well, no matter how noble the cause may seem. There is always an ulterior motive to “inject” anti-Israel, terror-apologist, and pro-Islamist rhetoric, no matter how subtle, in all she does.

Concluding my trifecta of commentators, here is Melanie Phillips explaining the pathology in the thinking of the Left, in her article on the Insurgency Against Democracy:

President Donald Trump was brought to power by a cultural counter-revolution: a revolt by millions of Americans against a liberal progressive consensus and the establishment that embodied it.

Those who voted for him want him to overturn that consensus. He promised to do so. In his inaugural address he told them he would keep his word; he would take power away from that establishment and give it back to the people. What we are now seeing, on the streets of America and in its media, is an all-out attempt to stop him.

For in deeming Donald Trump to be unfit to hold public office, in twisting and distorting what he says and does and then turning him into a vile monster on the basis of those distortions and in accusing him of fascism and Nazism and racism and very other form of evil, his opponents are setting themselves against the very democratic system they supposedly want to defend and are themselves unleashing the hatred and violence they affect to despise.

The reason for such disproportionate, indeed almost pathological behaviour is obvious. Left-wing “progressives” regard themselves as the elect who alone are entitled to wield power. This is because they alone know how society must be refashioned to bring about the transformation of human nature and the utopia of universal equality. The fact that they have now lost power is not just a set back. It simply cannot be allowed to happen.

Those who accuse Donald Trump of fascism are not only guilty of what might be called “fascism-denial” by diminishing what fascism actually is and the terrible things it entails. They are also projecting onto the President behaviour which they themselves are guilty of inciting.

The anti-Trump demonstrations in Washington DC, although largely peaceful, were nevertheless marked by thuggery and violence, with masked hooligans hurling bricks and rocks through the windows of shops and offices.

Rabbi Marvin Hier, who blessed the new President at his inauguration, became the target of hundreds of antisemitic messages, including Nazi imagery, from US viewers watching the inaugural events online.

We don’t yet know what kind of President Donald Trump will be. But those accusing him of anti-democratic, hate-fuelled and fascist attitudes are themselves displaying and inciting these very qualities.

And with every single thing they do or say, they are proving over and over again just why he was elected.

As Melanie Phillips says, until the Left “gets it” and internalizes just where they went wrong, they will spend a lot of time waiting to regain power again.

Donald Trump is certainly not the perfect President, and not the person many of us would have voted for, but he is the American people’s choice, and we should wish him the best of luck and great success, not only for America’s sake but for the sake of the West which has deteriorated so egregiously during Obama’s regime.