Some good news on the diplomatic front

Refreshing winds of change are blowing on the various diplomatic fronts facing Israel in recent days, a remarkable turn of events for Israel and her supporters who are more used to lawfare and demonization.

Nikki Haley, the US Ambassador to the UN, who has already proven her pro-Israel credentials at the UN, declared at the AIPAC conference this week an end to Israel-bashing at the UN since “there’s a new sheriff in town!”. You can read the entire transcript at the link, or simply watch this great video:

More support for Israel at the UN comes from the UK, in another sign of the times under the leadership of PM Theresa May. The UK put the UN Human Rights Council “on notice” after its continued anti-Israel activity:

The United Kingdom on Friday put the UN Human Rights Council (UNHRC) “on notice” over its “bias against Israel”, after the Geneva-based body adopted four resolutions on the Israeli-Palestinian conflict and a fifth condemning alleged human rights abuses in the Golan Heights.

In a scathing statement, the UK’s Mission to the United Nations lamented that while five resolutions were passed condemning Israel, not one condemned neither incitement nor terrorism on the part of the Palestinians.

The statement warned that the UK would vote against future resolutions on the Israeli-Palestinian conflict if the UNHRC did not change its “absurd” and “disproportionate focus on Israel.”

“Justice is blind and impartial. This selective focus on Israel is neither.”

The statement came as the Council adopted five resolutions under the body’s Agenda Item 7, which mandates discussion of Israel’s human rights record at every UNHRC session. Israel is the only country for which such a mandate exists.

This resounding support for Israel was followed by the UK’s former Foreign Minister Boris Johnson calling the UN criticism of Israel’s bombing of Hezbollah absurd:

Boris Johnson, the UK foreign secretary, has condemned the UN human rights council criticism of Israeli bombing of Hezbollah positions in the Golan Heights as “absolutely preposterous” and “a profound absurdity”. 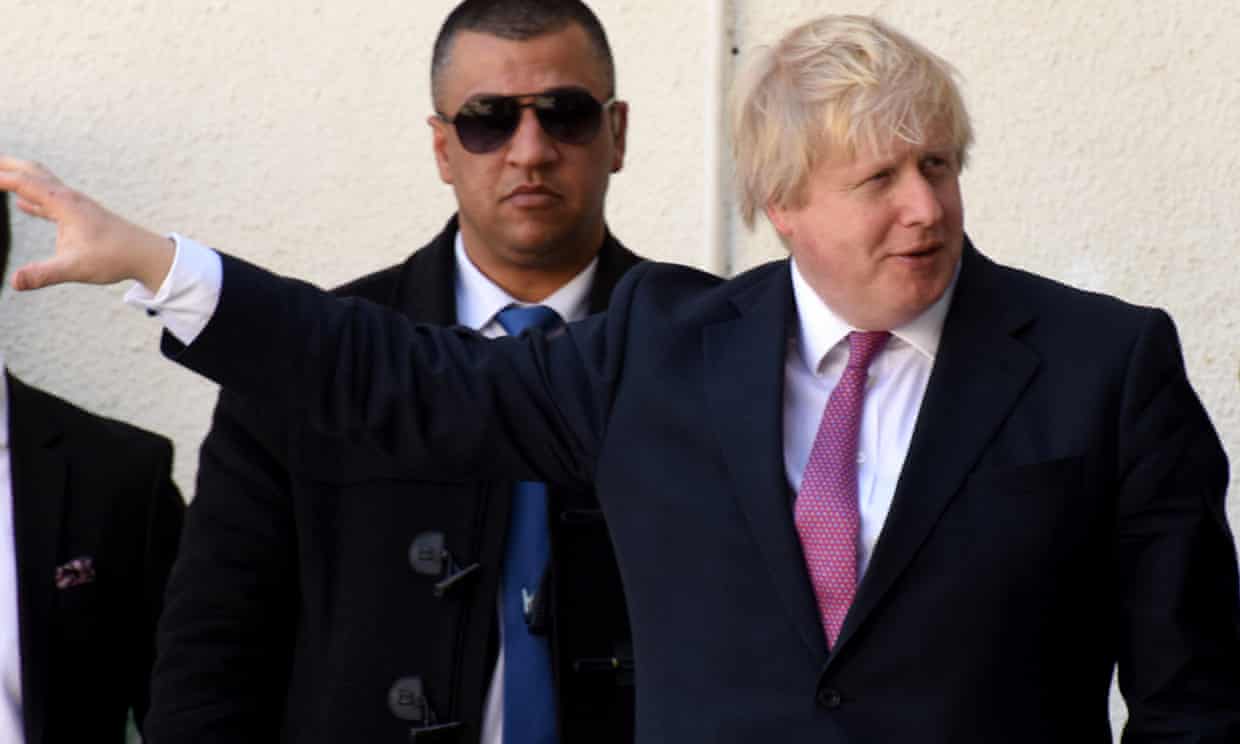 He was speaking after the UK mission to the UN in Geneva put the UN “on notice” that it would vote against all resolutions about Israel’s conduct in the occupied Syrian and Palestinian territories unless the human rights council ended what the UK mission described as anti-Israel bias.

The change in tone is quite astonishing given the Foreign Office’s Arabist “camel corps” reputation.

Some 15 parliament members and around 150 other participants came today (Tuesday) to the central complex of the European parliament in Brussels for the inauguration ceremony of the group “Friends of Judea and Samaria in the European Parliament.”

The establishment of the group is the culmination of the efforts of the foreign relations department of the Regional Council of Samaria.

Head of the Council Yossi Dagan said of the event, “For some time now, they have been speaking to us, and not with us. We have come here in order to change that situation and in order to advance, by means of this group, the human rights of Israeli residents of Judea and Samaria, who can take nothing for granted. From the right to build to the right to organized emergency medical services, nothing can be taken for granted. This is a serious phenomenon, and the “Friends” will fight for this issue as other issues are fought for within the walls of the parliament.

MEP Petr Mach, head of the Friends of Judea and Samaria in the European Parliament, said at the event: “We decided to establish a new group in the EP because we want to inform the public and the members of the parliament of how taxpayers’ money is used to support terrorism in Israel, of how, at a time when Palestinian merchandise comes into Europe without being taxed, Jewish products are specifically taxed.”

“We want to notify the public and the members of parliament of this injustice and we want to work together to cancel the taxation on Jewish products and put an end to the supportive funding, whether direct or indirect, of terror in Israel, and Judea and Samaria in particular. This conference is a first step. The group established now will work from inside the parliament for the interest of Judea and Samaria,” he added.

One of the main attractions at the event was 14-year old Ayala Shapira, who was so terribly burnt in a firebombing near her home in the Shomron 2 years ago.  Ayala is a good friend of my granddaughter, and I can confirm that she still has to walk around with that pressure mask on her face.

You can watch her in action here:

and you can read the full transcript of her moving words and admire her fighting spirit here:

I am Ayala, almost fourteen. I live in El Matan in the Shomron; I like to read, write stories and draw. I would like to describe to you what it feels like to have a terrorist attack directed at you.

The truth is, at the moment it happened I didn’t really understand what was happening. I saw a ball of light coming towards us. My father quickly stepped on the brakes. The ball of light shattered my window and landed between us. It was a Molotov cocktail.  I remember that everything around us was burning. I thought I was going to die.

Afterwards, I started to act.  I tried to open my door, but wasn’t able to.  I was sure that the central door lock had melted in the heat, but then, my father opened the door from the other side.  My entire left side was on fire, but I couldn’t free my seat belt with my left hand, so I put my right hand into the flames, too. Then, I just started running. My father told me to roll around on the road to put out the fire burning me.

Only then did I begin to feel pain. I told my father that his shirt was also on fire and I asked him to also roll around on the road, but he didn’t stop. He wanted to save me first.

I was hospitalized for eight months; that’s where I understood that my life was about to change drastically. Sometimes, I really miss being outside and feeling the sun and doing all the things I want to do.  The hardest thing is when people look at me. I see it.  I most appreciate the people who don’t try to hide it; they look at me but ask what happened to me – why am I all covered up?

One of the terrorists who threw the Molotov cocktail at our car was a sixteen year old boy – only a few years older than me. He did it, among other reasons, to help his family economically; he knew that if he is put into prison, the Palestinian Authority would take care of them.

By doing so, the countries that this Parliament represents, cause the murder of israelis. All of this is enabled by the European taxpayer. Hundreds of millions of Euros are transferred annually from the European Union to the Palestinian Authority, which finances, among other groups, the Palestinian Prisoners’ Organization, schools named after terrorists who murdered children, schools calling for terror, and others.

I call out to you, members of the European Parliament, members of the Group of Friends of Judea and Samaria – to stop this kafkaesque absurdity; to stop the encouragement of killing and destroying families done by the countries this House represents.

Maybe this will be the start of a change for the better in the European Union.

And one last item of good news (before tomorrow’s installment) is the appointment – finally – of the staunchly pro-Israel David Friedman as US Ambassador to Israel:

Bankruptcy attorney David Friedman has been sworn in as US envoy to Israel, becoming President Donald Trump’s first ambassador to take office.

Pence called Israel the United States’ “most cherished ally,” while Israel’s envoy to Washington Ron Dermer was present for the ceremony.

The Senate confirmed Friedman’s nomination by a vote of 52-46 last week, largely along party lines.

“David, you literally were born for this job,” Pence said. “It is because of families like yours that the Jewish people are such a beautiful thread in the fabric of this nation.”

The son of an Orthodox rabbi, Friedman has been a fervent supporter of Israeli settlements and an opponent of Palestinian statehood.

Speaking after taking the oath, Friedman said that the fact that he was the first envoy approved by the Senate and sworn in “speaks volumes about how highly the Trump-Pence administration prioritizes our unbreakable bond with the State of Israel.”

Mazal tov Mr. Friedman. May you build a true bridge of friendship between our two great nations.

4 Responses to Some good news on the diplomatic front