It’s a great feeling to continue the good news from yesterday into today, towards Shabbat, so here is my latest Good News Friday installment.

First up is a blast from the past, as Israeli students unearthed a 2,000 year-old Jewish town:

Israeli 11th-graders from a Jerusalem high school recently helped uncover a 2000-year-old town with an impressive array of ritual baths and underground systems used by rebels during the Bar Kokhba Revolt. Inside one of the ritual baths uncovered in the excavation. (Assaf Peretz/IAA)

The 240 students were working in an original and rewarding way to reduce travel costs for a heritage trip to Poland. They spent an entire week on archaeological excavations in Ramat Beit Shemesh, far from their computers and air-conditioned classrooms.

In recent months, they discovered the remains of a Jewish town dating to the Second Temple period.

As in many other instances in Israel, the findings were chanced upon while conducting excavations prior to the building of a new residential neighborhood.

The town, whose ancient name is unknown, has so far yielded eight ritual baths, cisterns and hiding refuges, along with rock-hewn industrial installations. The houses themselves have not survived and their stones were taken to construct buildings in later periods.

“The town’s extraordinary significance lies in its imposing array of private ritual baths, which were incorporated in the residential buildings,” Sarah Hirshberg, Shua Kisilevitz and Sarah Levevi-Eilat, excavation directors on behalf of the Israel Antiquities Authority (IAA), explained in a statement. “Each household had its own ritual bath and a cistern. Some of the baths uncovered are simple and others are more complex and include an Otzar, or collecting basin, into which the rainwater would drain. It is interesting to note that the local inhabitants adhered strictly to the rules regarding [ritual] purity and impurity.”

Underneath the dwellings and rock-hewn installations, another surprising discovery was unearthed, dating back to the Bar Kokhba Revolt against the Romans (130-135 CE)—a winding labyrinth of hiding refuges connected to sophisticated and elaborate complexes.

What a fascinating find! Kol hakavod to the enterprising students who helped uncover the distant past in order to defray costs in revisiting our more recent past:

“This unique project, which connects the country’s past and Israel’s heritage with Holocaust studies and the journey to Poland, provides students with an educational experience in which they are exploring and investigating,” said Dafna Menashe Baruch, principal of Boyer High School, which these students attend.

She said that by stepping outside the classroom and working in the field on an archaeological dig, students are exposed to many different worlds of knowledge, a “valuable educational program that connects the past with the present”.

“It’s fantastic that we, Israeli students in the 21st century, are getting the opportunity to find out about the country and are unearthing a Jewish settlement from 2000 years ago with our own hands,” said student Shelly Kozlovich. “With the money we’re making, we’ll pay for our trip to Poland and learn there about the Holocaust – an event that had a huge influence on Israel’s establishment. It’s a great way of closing a circle.”

Indeed, Israel’s past, both distant and more recent, is never far from the surface. I think all Israeli schools should undertake such activities in order to enlighten their students.

And now from the past, back to the present at high speed – by train that is. In a sign that the Messiah might really be on his way, the high speed train from Tel Aviv to Jerusalem is finally coming down the rails:

This rail line will revolutionize travel between the country’s two biggest cities, bringing residents and visitors into the heart of Israel quickly for work or leisure.

Currently it takes about an hour to drive the approximately 60 kilometers (37 miles) northwest from Jerusalem to Tel Aviv, though traffic jams often lengthen the trip. An old scenic train route chugs along from the remote southwest corner of Jerusalem, winding around the hills and making several stops before reaching Tel Aviv two hours later. 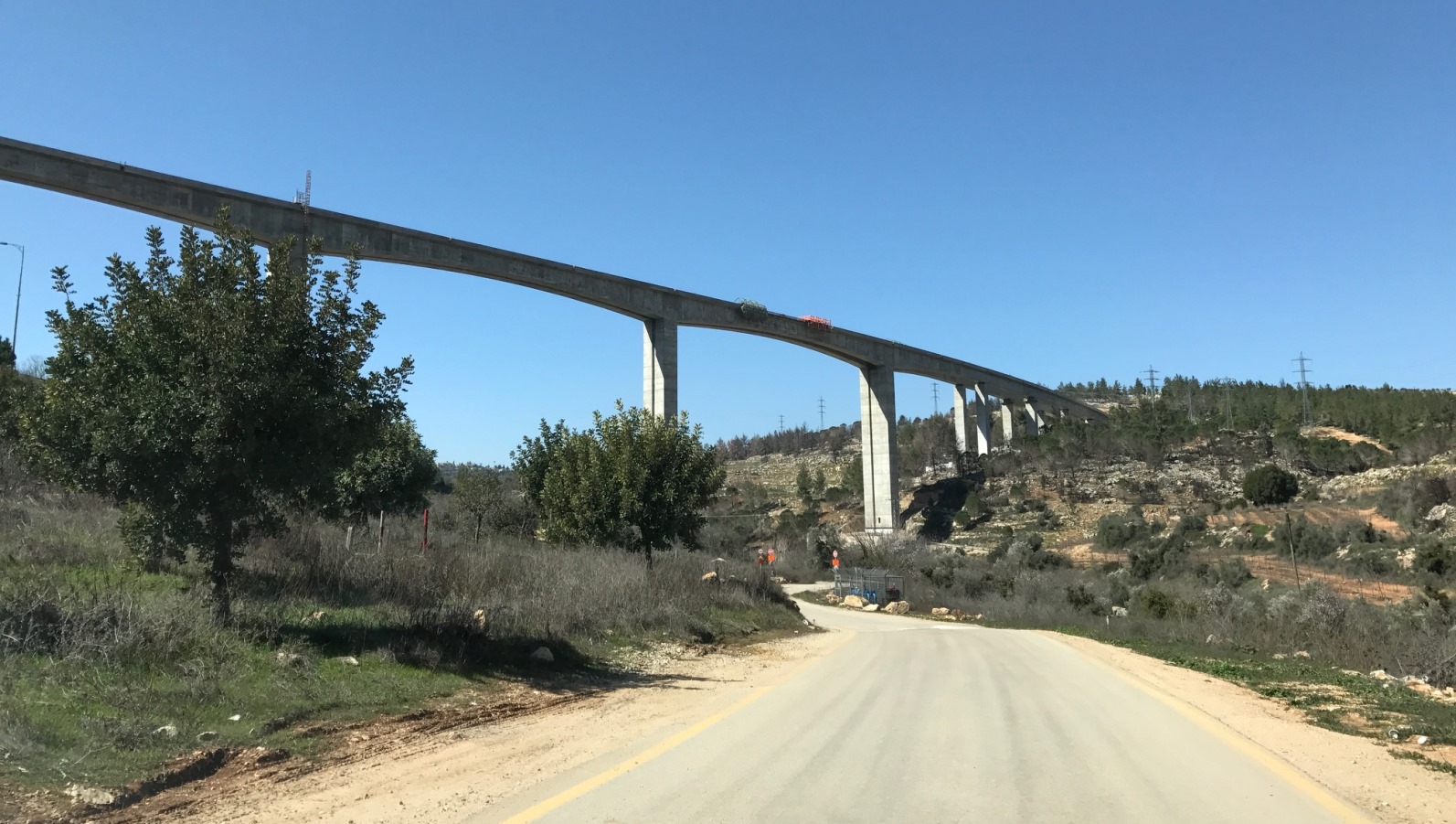 This is the highest railroad bridge in Israel, at 95 meters. Photo by Abigail Klein Leichman

When it opens in the first half of 2018, the high-speed route will take less than 30 minutes, including a stop at Ben-Gurion International Airport. It will service Tel Aviv’s existing four railway stations and a new transportation hub alongside Jerusalem’s Central Bus Station and light-rail stops.

The fast train is the biggest Israel Railways projects in the past decade and one of the biggest infrastructure projects in modern Israeli history, costing the government just under $1.9 billion. Nine bridges and four tunnels enable as straight and flat a route as possible. 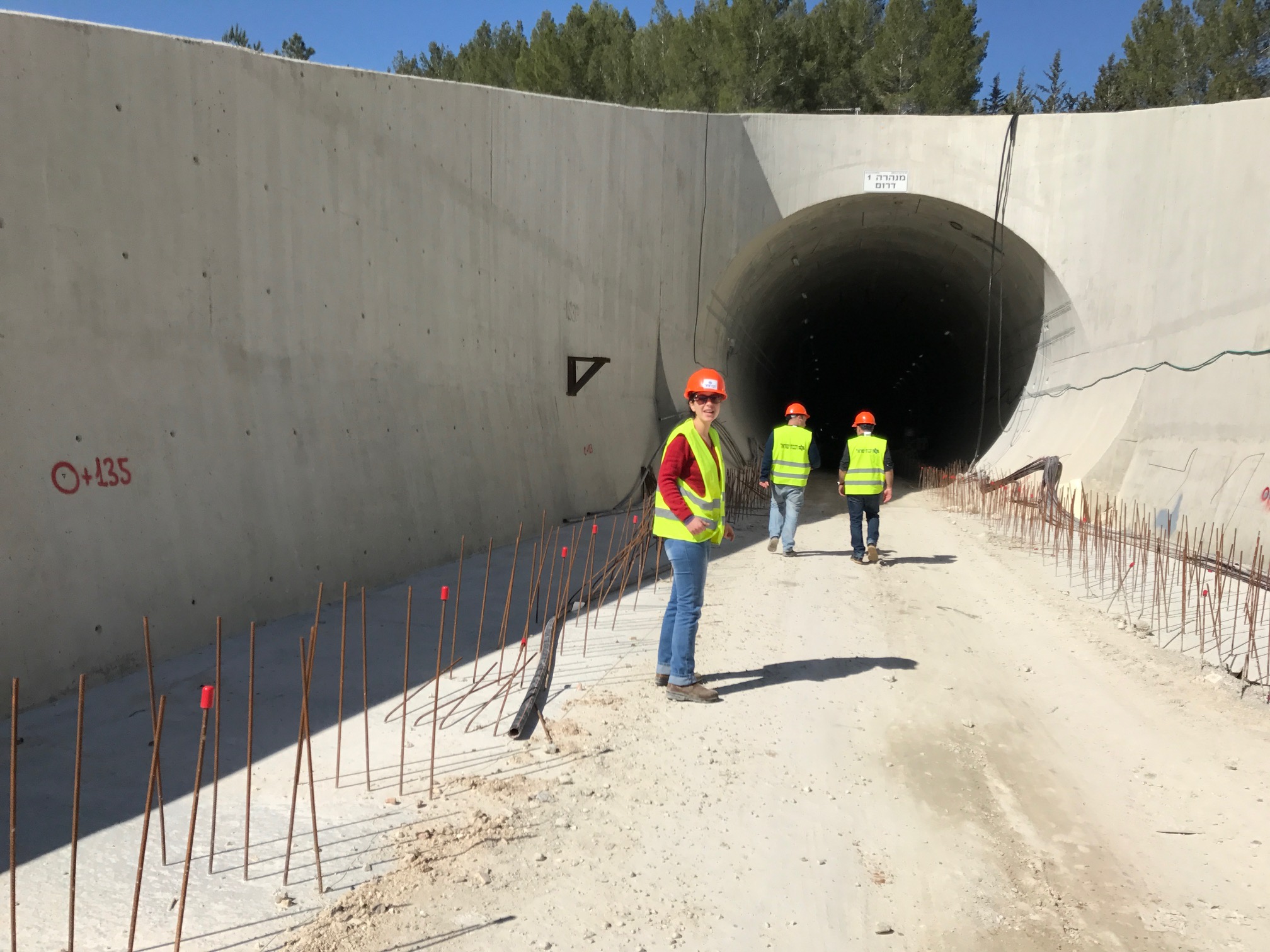 Tracks are being laid in all the newly dug tunnels for the fast train between Jerusalem and Tel Aviv. Photo by Abigail Klein Leichman

“The bridges are up, the tunnels are dug; now we’re working on the electro-mechanics and putting down the rails,” says Israel Railways spokeswoman Batsheva Segev Landau at the Israel Railways Visitor Center in Sha’ar Hagai.

10 years in the making

Getting to this moment took more than 10 years due to massive engineering and environmental conundrums.

I beg to differ: it has taken something like 2,000 years!

“One of the biggest challenges with this line is the topography because trains can’t go beyond a 3 percent slope up. Coming up to Jerusalem you can either go around the mountains — as the Turks did on the line from Jaffa to Jerusalem, which is very slow — or make tunnels through the mountains or bridges over them,” Landau explains.

Tunnel 3 is the longest in the Mideast, at nearly 12 kilometers (7.4 miles). Emergency connecting tunnels were dug every 250 meters.

Each surrounding stone removed in the tunneling was numbered and replaced to cause the least possible disturbance to the landscape.

The earthquake-proof balanced cantilever bridges – including the highest railroad bridge in Israel at 95 meters over the Arazim Valley, and the longest at 1,250 meters spanning the Ayalon River – are supported by very few legs to leave the valleys pristine.

Seriously, this is brilliant news. So many people I know commute from the center to Jerusalem and the traffic is horrendous and becoming daily ever more so.  Despite what the article says, the drive is more like 1.5-2 hours, especially at peak hours. I can hardly wait for the train to finally go into action. Kol hakavod to everyone involved in this massive project. Read the rest of the article to understand the huge engineering feat the train project entailed.

With the care involved in preserving the environment in the train project, is it therefore any wonder that Tel Aviv is the seventh greenest city in the world?

Tel Aviv, Israel, is among the greenest cities in the world, ranking No. 7 on a prestigious list compiled recently by MIT researchers in collaboration with the World Economic Forum.

According to city officials, the number of trees in Tel Aviv (excluding trees in parks) has doubled over the past decade, reaching 260,000, averaging 5,000 trees per square kilometer.

“We’ve cleaned up vacant lots to make room for parks and promenades,” Tel Aviv Mayor Ron Huldai said in a statement. “Today, our hard work has paid off, and our green city provides a high quality of life.”

Kol hakavod to Mayor Huldai and the residents of Tel Aviv who all cooperate together to keep the city – once a dirty and polluted place – into a beautiful, environmentally friendly city.

Israeli scientists from the Rehovot-based company Nucleix succeeded in developing a first of its kind blood test to diagnose lung cancer.

The new test is able to diagnose the disease long before it spreads in the body, thus increasing the chance of survival, as many patients usually die within a few months of the diagnosis.

Each year, approximately 1.8 million new lung cancer patients are diagnosed, a 1.59 million of whom will die within the first year post-diagnosis. Most cases are discovered by chance, after a screening test, or due to abnormal symptoms such as prolonged cough, bloody cough, breathing difficulties or weight loss.

Diagnosis of the disease is usually done via a CT scan, but its level of accuracy is not high, and in 25 percent of the cases, the lung scan shows lesions of which only 3% are indeed cancerous.

The new test was developed by Dr. Elon Ganor, CEO of Nucleix, in collaboration with his colleagues Dr. Danny Frumkin, Dr. Adam Wasserstrom and Dr. Ofer Shapira. The test is based on the genetic characterization of cancer.

What an incredible development! This has the potential to save hundreds of thousands of lives. Kol hakavod to Drs. Ganor, Frumkin, Wassterstrom and Shapira on their remarkable development. May they continue to save lives through their invaluable work.

And one last very heart-warming item for today. Just over a year ago, Dafna Meir was murdered by a Palestinian terrorist in her home in front of her children. A few weeks ago her daughter Renana announced her engagement. This week, Dafna’s widower Natan announced his own engagement to Zohar Morgenstern:

Just over a year after his wife was brutally murdered by an Arab terrorist in their home in Otniel, Natan Meir is engaged to be married – just weeks after his daughter announced her own engagement.

Thirteen months ago, an Arab terrorist broke into the Meir home and stabbed 39-year old Dafna Meir, a hospital nurse, to death in front of her young children.

Dafna was survived by her husband, Natan, the couple’s four children and two foster children.

Earlier this month the Meir family celebrated the engagement of Dafna and Natan’s oldest child, Renana.

Renana’s fiancé, Leiba Ohr, proposed to her on the Mount of Olives, overlooking the Temple Mount.

On Monday Natan Meir announced that he too was engaged to be married. Natan and Renana have shown us all that life is stronger than death, and that even the greatest horror and sorrow can be overcome with strength and support. Kol hakavod to father and daughter on their courage in starting out anew. They are a testament to Dafna’s strength of character and faith, and her memory will never be forgotten.

And of course a hearty Mazal Tov to Natan and Zohar, and to Renana and Ohr. (Interestingly, both the names Zohar and Ohr mean “light” in differing versions. May they both help to bring light to the Meir family and to all of Israel).

And now, with this happy thoughts, I wish you all Shabbat Shalom.