Yom Hashoah began at sundown this evening with the annual ceremony at Yad Vashem.  where President Reuven Rivlin reminded the world that:

“The gas chambers were not built ‘as a crime against humanity’, they were built for the purpose of annihilating the Jewish People, and specifically that nation. There has been no previous historical event like this: extermination divorced from any [political] conflict, divorced from territorial issues, or from a struggle for dominance. It was a terrorizing process that gathered Jews from around the world, from different continents, Jews who did not know each other’s language, both the believers and non-believers, assimilated and orthodox Jews, With one goal: to exterminate them and their seed from the face of the earth,” he said.

This year’s torch-lighters reflected the theme “Restoring Their Identities: The Fate of the Individual During the Holocaust”. The six torch-lighters, representing the six million murdered in the Shoah, were Moshe Ha-Elion, Moshe Jakubowitz, Jeannine Sebbane-Bouhanna, Moshe Porat, Max Privler and Elka Abramovitz.

You can read their incredible, inspiring life stories at the link.

Despite the years and decades that have passed, there always seem to be new details revealed about the Shoah.

Israel Hayom reports that according to newly revealed records, the Allies knew of the Holocaust as early as 1942:

The apathetic response of the world to the horrors of the Holocaust has been researched and covered extensively, but newly uncovered documents reveal just how deep the apathy ran.

The documents, which have come to light for the first time in 70 years after being archived in the United Nations, reveal that the Allies were aware of the atrocities perpetrated against the Jews of Europe much earlier in the war than previously thought — but did nothing to stop them.

Based on the newly available U.N. documents, researcher Dan Plesch of the University of London wrote the book “Human Rights After Hitler.” Britain’s Independent newspaper interviewed Plesch, who said that prior to the discovery of the new material, the prevailing belief had been that the Allies found out about the slaughter of Jews in 1944, when they learned about the Nazi concentration camps.

But Plesch explains that the Allies knew about the Holocaust some two and a half years earlier. They had received reports both from the camps themselves and from the resistance movements in Nazi-occupied areas.

According to the Independent interview, by December 1942, the U.S., Britain, and the Soviet Union knew that at least 2 million Jews had been murdered by the Nazi regime and that 5 million more were in mortal danger.

Moreover, at that stage, the three countries were already working on compiling a base of evidence to charge Nazi dictator Adolf Hitler with war crimes, but they still took no steps to intervene.

The Independent reports that in March 1943, Viscount Cranborne, a British peer and minister in Prime Minister Winston Churchill’s war cabinet, said that Jews should not be considered a “special case.” Cranborne said the British Empire was already full of refugees and could not offer safety to any more.

Plesch told the Independent that anti-Semites in the U.S. State Department rejected efforts by then-U.S. envoy to the United Nations War Crimes Commission Herbert Pell to help the Jews of Europe. Pell later said that some members of the State Department were concerned about what would happen to U.S.-German trade relations if the U.S. pressed ahead with war crimes charges against Nazi leaders. This public claim by Pell prompted the State Department to bring the Nazi leadership to trial at the Nuremberg proceedings.

“Among the reason given by the U.S. and British policymakers for curtailing prosecutions of Nazis was the understanding that at least some of them would be needed to rebuild Germany and confront communism, which at the time was seen as a greater danger,” Plesch writes in “Human Rights After Hitler.”

These reports belie the self-righteous claims of the Allies that they liberated the Jews from the death camps. Yes, they technically liberated them, but if they had only acted earlier – when they received the initial information – how many hundreds of thousands of lives could have been saved!  The injustice shrieks to the heavens!

Another newly discovered, or re-discovered, document is the telegram sent by Hitler’s deputy Heinrich Himmler to the Nazi’s ally, the Mufti of Jerusalem offering help against the “Jewish intruders”:

A telegram from Heinrich Himmler to the grand mufti of Jerusalem has been found in the archives of Israel’s National Library.

A telegram from senior Nazi Heinrich Himmler to the grand mufti of Jerusalem, Haj Amin al-Husseini, probably dating to 1943, found in the archives of the National Library, March 29, 2017.

Believed to have been sent in 1943, it contains a promise by Hitler’s deputy to Haj Amin al-Husseini that the German Reich will stand behind the Arabs of Palestine and support their struggle against “Jewish intruders.”

Published on the library website on Wednesday, the telegraph notes that the struggle against world Jewry has been a principle of the German National Socialists from the start, and that the regime has always followed “with particular sympathy,” the struggle of “freedom-loving Arabs,” especially those in Palestine battling the Jews.

“The joint recognition of the enemy and the struggle together against it are what build the solid basis between the National Socialists of Greater Germany and freedom-loving Muslims of the world,” Himmler wrote.

The Mufti, Haj Amin al-Husseini, meets with Hitler in Berlin in 1941

The telegram concludes with the SS chief sending the mufti his warm greetings on the “unhappy” anniversary of the Balfour Declaration and best wishes for the continuation of the struggle.

One would think that with the plethora of documentary evidence about the Shoah that Holocaust denial would become a thing of the past. But the battle for memory and history is still ongoing says Robert Rozett:

Although Europe, fortunately, has not known full-fledged war since the end of the twentieth century, it is the main scene of a battle going on today. It is a battle for memory and about the history of the Holocaust and events of the Second World War. This battle is playing out on several fronts, but with at least one clear common denominator: history is frequently being manipulated and whitewashed for political reasons.

The most recent newsworthy skirmish took place in France, where Marine Le Pen declared that “France was not responsible for the Vel d’Hiv.” This is perhaps the most infamous raid on French Jewry. Early in the morning on July 16, 1942 some 4,500 French policemen started to arrest foreign Jews living in Paris. More than 11,000 were arrested that day, and confined to the Velodrome d’Hiver, known as the Vel’ d’Hiv, a winter cycling stadium in Paris. They were held in atrocious conditions. Within a few days, the number of Jewish incarcerated had grown to 13,000, including about 4,000 children. From the Vélodrome d’Hiver the Jews were sent east to Nazi extermination camps by way of French transit camps. Le Pen presents what has come to be known as “alternative facts,” in other words a totally ungrounded version of events that seeks to whitewash the role of the French in this deportation and subsequent murder of Jews, so as to place all of the onus on the Germans.

Concomitantly, there is a trend to present Poles as a nation of victims and rescuers. Of course Poland suffered greatly under the yoke of the Nazis, but Polish suffering did not translate into solidarity with Jews. The arithmetic gymnastics that are employed to extrapolate from the 6,706 Polish Righteous among the Nations and conclude that at least a million Poles were involved in rescue, are just that, gymnastics. It is true that more Righteous among the Nations have been recognized in Poland than any other country, but that is because Poland had by far the largest Jewish community under Nazi domination, and it is not because Poland was a nation of rescuers.

Reading Barbara Engelking’s recently published monograph “Such a Beautiful Sunny Day, Jews Seeking Refuge in the Polish Countryside 1942-1945” (Yad Vashem 2017) alongside Jan Grabowski’s seminal study “Hunt for the Jews, Betrayal and Murder in German-occupied Poland” (Indiana University 2013) demonstrates unequivocally that many ordinary Poles were deeply complicit in the persecution and murder of their Jewish neighbors, and that those who rescued Jews, first and foremost feared denunciation by fellow Poles, usually their neighbors and even family members.

Reading about such Holocaust denial and Holocaust “minimization” is a terribly depressing thing, made all the worse if you delve into the depths of social media.

To help counteract this, former Chief Rabbi Lord Jonathan Sacks has produced a timely video on the mutation of antisemitism which is a very important lesson for all of us – not just for Jews but for all civilized people. 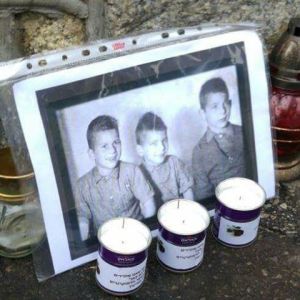