As I did last year, I attended the festive prayer service in the central square of my daughter’s community of Karnei Shomron; the square was packed and people sang the psalms and prayers with great gusto. The highlight of the service was the blast of a Shofars followed by a rousing rendition of “Next year in Jerusalem!”.

The prayers were followed by some dancing and the presentation of awards to honoured citizens (יקירי הישוב) who had excelled in their field. We had huge nachat and a very big surprise when our daughter was called to accept an award for her voluntary work on a committee which helps families in crisis. Kol hakavod Hadassah!

This was then followed by the highlight of the evening – a very entertaining show put on by the town’s residents. Every age group took part, from kindergarten to grandparents. The production was most impressive, the community singing loud and with gusto, and the fireworks at the end were beautiful.

Here’s a link (via Reality) to the festive prayers at Bet El Yeshiva. If you look carefully and spot a redhead – that’s my nephew! 🙂

Update: Here’s the video itself (I hope you can watch it).

Mournful and somber speeches gave way to fireworks, concerts and parties across the country, with flags promptly raised back from half-staff. At the military on Mount Herzl in Jerusalem, the transition was marked with an extravagant state ceremony featuring a speech from Knesset speaker Yuli Edelstein, the lighting of torches by 12 people who are seen to have made an outstanding contribution to society, and much singing and dancing.

The torch-lighters were all extraordinary people:

Yaakov (Yaki) Hetz, who served in the Paratrooper Brigade during the campaign for Jerusalem in 1967, lit the second torch. He dedicated it to the families who lost relatives in Israel’s wars.

Miri Ehrental, 67, who along with her husband, Chaim, founded Zichron Menachem, a children’s cancer support center set up in memory of their son Menachem who died of the disease at the age of 15, lit the third torch on behalf of those who choose to do national service outside the IDF.

Michael Steinhardt, a 76-year-old American philanthropist who co-founded Taglit-Birthright Israel along with Charles Bronfman, and Rabbi Marvin Hier, the founder of the Simon Wiesenthal Center in the US, lit the fourth torch together, the first non-Israelis ever to light a torch as part of the official celebration.

US-born Rabbanit Chana Henkin, a trailblazing educator of religious Jewish women, whose son Eitam was murdered by Palestinian gunmen in October 2015 along with his wife, Naama, dedicated the next torch to the scholars.

Eli Mizrahi, 65, owner of one of the best-known coffee shops in Jerusalem’s iconic Mahane Yehuda market, lit his torch on behalf of the shopkeepers of Jerusalem.

The seventh torch was lit by Professor Ahmed Eid, head of Hadassah Hospital’s Department of General Surgery. He dedicated his lighting to the shared future of Jews and Arabs in Israel.

Betar Jerusalem soccer player Uri Malmilian, 59, dedicated his torch lighting to his neighbors, family and friends, the people of Jerusalem.

Professor Amnon Shashua, co-founder of the Mobileye and OrCam startups, dedicated the ninth torch to the start-up nation and technological advances of the Jewish state.

Dina Simata, 19, a new immigrant from India who is a student in Jerusalem’s Jewish Institute for the Blind, recited her speech while reading it in braille.

Yehoram Gaon, a 78-year-old Jerusalem-born singer, actor, director, producer, and TV and radio host, dedicated his torch to the spirit of Jerusalem, “which spreads throughout the world,” and to poets, singers and artists across the globe.

The final torch was lit by two soldiers: Ethiopian-born Major Yarus Yerushalayim, 30, who came to Israel when she was 4-years-old and serves in the Education Corps, and Lieutenant Dean Argil, 22, a third-generation Israeli serving in the Paratroopers. His grandfather served in the Paratrooper Brigade during the campaign for Jerusalem.

There is so much to be thankful for and so much to be proud of as Israel turns 69. Its population has grown to 8.68 million! And look at the rest of the astonishing statistics:

According to the report, the Jewish population represents 6.484 million residents – 74.7% of the total population – and the Arab population stands at 1.808 million people, 20.8% of the country’s inhabitants.

The data also revealed that the Jewish state’s population is expected to hit over 15 million by 2048 – Israel’s 100th birthday.

Since last year, the country’s population grew by some 159,000 people, marking a 1.9% increase, the report found.

In addition, the figures showed that 174,000 babies were born this past year, while 44,000 deaths were recorded.

With regard to aliya, some 30,000 immigrants arrived this past year.

According to the report, three-quarters of Israel’s Jewish population are Sabras, native-born Israelis. This figure is more than double the percentage in 1948.

This year’s report also compared today’s Israel and the newborn state in a number of areas.

An even more astounding revelation in one survey is that Israeli Arabs view Israel more positively than Jews do, as this Facebook photo demonstrates:

From the ToI link:

More among Israel’s Arab community than its Jewish population are satisfied with life in Israel and slightly over half are proud to be Israeli citizens, according to a survey released on Sunday.

The results of the poll, conducted by the Israel Democracy Institute and Tel Aviv University Peace Index, were released ahead of Israel’s 69th Independence Day that falls on Tuesday. The survey sought an appraisal of life in Israel, asking the question: “How’s it going?”

Similarly, according to the survey, 73% of Jews and 61 % of Arabs felt optimistic about Israel’s future, but while a majority from both communities were satisfied with Israel’s ability to maintain security in the country, only a small percentage of all Israelis felt that the government is attentive to their needs.

The good appeared to outweigh the bad, however, with some 80% of respondents saying they felt proud to be Israeli (51.1% among Arab respondents, 86.1% among Jewish respondents.)

Optimism was also high with 74% of Jews and 61% of Arabs responding positively to a question about how they feel about the future. The majority of the public (82% of Jews and 58% of Arabs) also feel “to a moderately large extent” or “to a very large extent” a part of the state of Israel and its problems, according to the survey.

The country’s economic stability also ranked well with most Jews (62%) and Arabs (75%), who said Israel’s economic situation was “moderately good” or “good.”

Medicine, health, and education services as well as science, ranked high with 70% of respondents seeing the country’s achievements in medicine and health as “moderately good” or “good.” Some 61% of Israelis felt the same way about achievements in education and science.

I can only nod my head fervently in agreement.

And more item to delight the eye, from Israel 21C: 69 reasons why we love Israel. Just click the link to watch the fabulous slideshow. Here are a couple of samples: 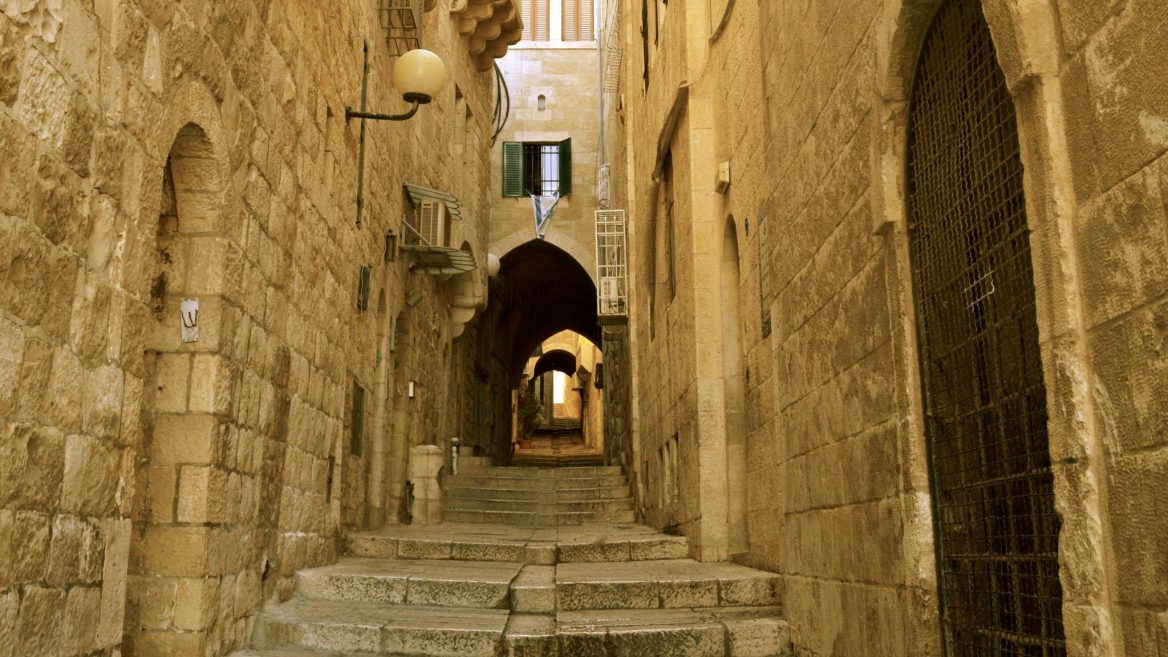 Because we have streets that look like this. Photo of a street in the Old City of Jerusalem by Daniel Santacruz 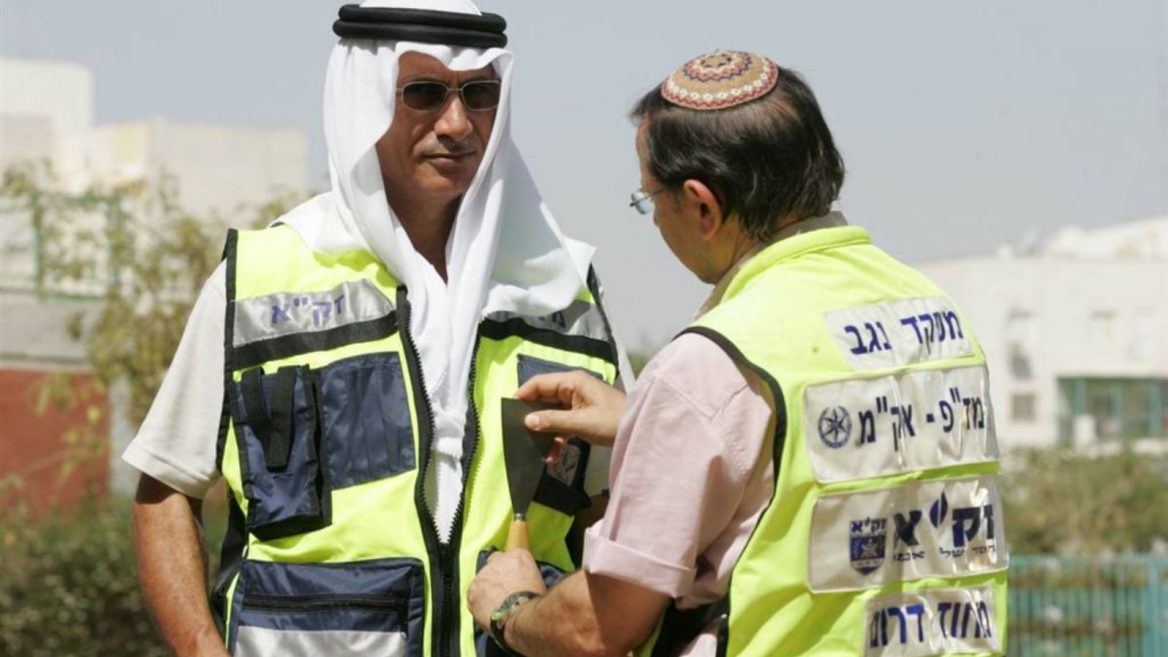 And because people of all sorts help each other in times of need. Arab and Jewish volunteers for ZAKA prepare to rescue victims together. Photo courtesy of ZAKA.