What on earth happened between Qatar and the Arab states?

The news out of Qatar and the Gulf had us all (well, me at least) scratching our heads in mystification. What suddenly triggered the break between Saudi Arabia and Qatar? Did they only NOW discover that Qatar has been harbouring terrorists? It’s been public news for years!  And did President Donald Trump’s visit to the region have anything to do with it? And what about the Russians? 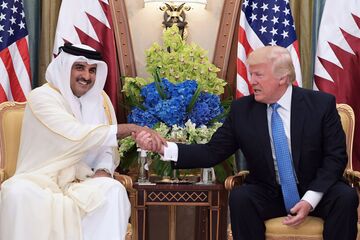 The Emir of Qatar and Donald Trump

For a brief moment it looked like President Donald Trump had done it.

He got the leaders of six Gulf nations to sign a communique pledging to eradicate the financing of jihadis. The timing happened to coincide with the completion of a new center in Saudi Arabia to combat extremism. It was a powerful signal that America’s traditional allies were united against Iran and Sunni extremists.

That lasted a couple of days. By Tuesday however the uneasy alliance of Gulf states started to come apart. It started with a quotation attributed to Qatar’s emir, Sheikh Tamim Bin Hamad Al Thani. Qatar’s official news agency quoted him telling a graduating class of national service recruits that it was important to calm tensions with Iran, that Hamas and Hezbollah were legitimate resistance movements, and that his country has every right to host Muslim Brotherhood leaders. That last organization is banned in most Gulf countries as well as Egypt.

The speech prompted outrage from Qatar’s Arab neighbors. Al-Jazeera, the broadcaster funded in part by the Qatari government, was banned in Saudi Arabia and the United Arab Emirates following the sheikh’s reported remarks. (The Qataris have said that the official news agency was hacked and that the remarks were never delivered.) Nonetheless, official newspapers in Saudi Arabia and the United Arab Emirates have slammed the Qataris for the past week, accusing the small nation in the words of one columnist of being a “disobedient son.”

This kind of thing is to be expected in the region. But the conflict also played out in Washington. The setting was a wonky policy conference on Qatar and the Muslim Brotherhood sponsored by the Foundation for Defense of Democracies and George Washington University’s Center for Cyber and Homeland Security.

Normally the politics of the Middle East don’t really intrude on such affairs. But the U.S. ambassador to Qatar, Dana Shell Smith, contacted many of the panelists in the days before the conference last week to make the case that Qatar was doing a much better job these days when it came to financing terrorism. Jonathan Schanzer, the vice president for research at the foundation, described this as a pressure campaign. One of that foundation’s experts on terror financing, David Weinberg, asked the audience last week how many of his fellow panelists received a call from the U.S. Embassy in Qatar.

It is certainly strange that the US Ambassador is working to whitewash Qatar’s dismal record, as political commentator Nick Short noted:

Why is the U.S. Ambassador to Qatar running a pressure campaign to whitewash Qatar's history of financing terrror? https://t.co/1o4AWRX3jn pic.twitter.com/XcrB1u9xDU

Smith’s main point is that Qatar’s new sheikh, who came into power in 2013, is committed to reforming his country’s notoriously lax attitude toward jihadis. He signed the communique on terror financing earlier this month. In 2014, he signed another one, known as the Jeddah Communique, committing the Gulf states to similar vigilance against private citizens sending funds to groups like the Taliban, al Qaeda and the Islamic State. What’s more, the Qatari government has in recent months responded to requests from countries like Egypt to expel Muslim Brotherhood leaders. And in 2015, Qatar reached an agreement with the Taliban and the U.S., under which the U.S. released five senior Taliban prisoners from Guantanamo Bay and sent them to house arrest in Qatar, and the Taliban freed U.S. Army Private Bowe Bergdahl.

Those are some pieces of evidence about Qatar’s recent turnaround. But this tiny country has a long history of playing both sides. On the one hand Qatar hosts one of America’s most important military facilities in the region, the Al-Udeid Air Base. And yet at the same time, its neighbors accuse Qatar of running an influence campaign against the U.S. and its allies.
…

More recently the Qataris have been a host to Hamas, the Muslim Brotherhood-affiliated Palestinian group that has built tunnels and rockets to attack Israel from Gaza, the territory it has controlled for a decade. When Hamas leaders unveiled a new set of principles this month, they made the announcement from a hotel in Doha.

… [former secretary of defense Robert] Gates concluded: “So we have had a peculiar relationship. There have continued to be political issues with Qatar even as we have been strategic military allies.”

That peculiar relationship will now be tested. As Muslim leaders gathered in Saudi Arabia this month to meet with Trump, he put the onus on their countries to drive out the extremists who have too often enjoyed safe haven and financing from the Gulf kingdoms. One of the first tests of this new policy will be whether Qatar shows initiative in rooting out the terror supporters inside its own kingdom. So far the Qataris have been responsive to outside pressure, whether it be from the U.S. or Egypt. It’s less clear how Qatar will respond when the rest of the world isn’t watching.

Regarding the Qataris’ claim that their news agency was hacked and that the speech that caused such outrage was never delivered, not only Qatar, but also the US intelligence services have laid the blame at the feet of the Russians:

Saudi Arabia then cited the false item as part of its reason for instituting a diplomatic and economic blockade against Qatar, the report said.

Qatar’s government said the May 23 news report attributed false remarks to the emirate’s ruler that appeared friendly to Iran and Israel, and questioned whether US President Donald Trump would last in office, according to CNN.

Qatari Foreign Minister Sheikh Mohammed Bin Abdulrahman al-Thani told the broadcaster that the FBI has confirmed the hack and the planting of fake news.

If accurate, the allegations would indicate Russian efforts to undermine US foreign policy, building on US intelligence concerns that Russian hackers attempted to influence last year’s presidential election, won by Trump. The Kremlin denies meddling.

They accused the tiny Gulf state of harboring extremist groups and suggested Qatari support for the agenda of Saudi Arabia’s regional archrival Iran. Qatar has strenuously denied the allegations.

Although Qatar hosts the largest American military airbase in the Middle East, Trump threw his weight behind the Saudi-led effort to isolate the emirate in a surprise move on Tuesday.

He suggested Qatar was funding extremism.

Who is telling the truth in this confusing story? And in the end does it really matter? It is well known and thoroughly documented that Qatar hosts Hamas leaders as well as a bunch of other terrorist leaders. Whether they have turned around their policy or not is something that can be verified when or if it happens.

Did the Russians plant the story? Very possibly, but then again what would be the point? A split between extremist Qatar and marginally-less extremist Saudi Arabia could work just as well in the West’s favour as against.

The really good news for Israel – besides a weakening in the Arab alliance – is that Hamas could be the biggest losers in this spat:

The United Arab Emirates, Saudi Arabia, Egypt and Bahrain officially cut ties with Qatar on Sunday, announcing a series of measures against Doha. Some of the measures include expelling Qatari diplomats and citizens and closing airspace to Qatar Airways.

According to Khatib, the four Arab states see Hamas as an extension of the Muslim Brotherhood, which they have designated a terrorist group.

“If the pressure continues, Qatar most probably would have to make some adjustments regarding its support for Hamas,” he said.

Qatar is one of Hamas’s staunchest allies.

It has sent millions of dollars to Gaza to support Hamas’s governance efforts, including hundreds of millions for reconstruction and millions for the energy sector.

Long may this spat continue!

Talking of spats, the news keeps overtaking us. Iran, the world’s greatest sponsor of terrorism, got bitten on its own backside yesterday by what it considers the “bad” terrorists of ISIS (as opposed to the “good” terrorists of Hamas and Hezbollah):

A double terrorist attack, claimed by ISIS, on Iran’s parliament ended with 12 killed:

Gunmen and suicide bombers stormed Iran’s parliament and the shrine of its revolutionary leader on Wednesday, killing 12 people and injuring 39 in the first attacks in the country claimed by the Islamic State group.

The attacks ended after a standoff lasting several hours, during which the gunmen holed up in parliamentary office buildings.

IS released a video of the attackers from inside the building via its Amaq propaganda agency — a rare claim of responsibility while an attack was still going on.

The Sunni jihadists of IS consider Shiite Iran to be apostate, and Tehran is deeply involved in fighting the group in both Syria and Iraq.

The assaults began mid-morning, when four gunmen burst into the parliament complex in the center of Tehran, killing a security guard and one other person, according to the ISNA news agency.

An interior ministry official said they were dressed as women and entered through the visitors’ entrance.

At roughly the same time, a team of three or four assailants entered the grounds of the mausoleum of Ayatollah Ruhollah Khomeini, who led the 1979 Islamic revolution, killing a gardener and wounding several other people.

Iran’s emergency services said a total of 12 people were killed in the two attacks and 39 were wounded.

Two of the attackers at the shrine, one of them a woman, blew themselves up, while another detonated a suicide vest on the fourth floor of the parliamentary office building.

You reap what you sow.

8 Responses to What on earth happened between Qatar and the Arab states?