As always, despite the bad or indifferent news of the past week, Friday ushers in Shabbat, and to accompany it, here is my latest Good News Friday post.

London has been engulfed by fire in recent days: two kosher shops in Golders Green have gone up in flames as well as the dreadful fire in the Grenfell tower block in West London where dozens of people have lost their lives and hundreds have been left homeless. Where could the good news possibly be here you may ask. The answer is in the wonderful, selfless spirit that has been bringing people of all colours and creeds to help out the victims.

In Golders Green, a Jewish businessman has offered a home and jobs to a (non-Jewish) couple who have been left with nothing after the fire in Kay’s kosher supermarket (via Suzanne):

The Jewish owner of a care provider in Barnet has housed a couple left homeless after the fire at Kay’s kosher deli in Golders Green, and has given them both jobs.

Sil and Riv with Larry Berkowitz in their new home

Larry Berkowitz of Bluebird Care stepped in after hearing that the couple, Sil and Riv both in their 20s, had been “left with nothing” and “sleeping on the streets,” with one sleeping on a bench and the other sleeping underneath it.

“I heard about it on Facebook,” said Berkowitz, whose company provides home-care across the borough. “Luckily we had a flat vacant so we’ve given that to them for a month or two, rent-free, until they find their feet, and we have also given them both jobs, as they were looking for employment when the fire broke out.”

The arrangements were being hastily made on Thursday, after Berkowitz heard about the couple’s plight on Wednesday evening.

“We understand that they weren’t insured, so they’ve lost everything,” he said. “There’s a local fund-raising effort underway to help them replace lost furniture and goods. Hopefully the jobs should help them too. We’ll start their training next week.”

Kol hakavod to Mr. Berkowitz who wasted no time in helping out these unfortunate people. He has made a huge kiddush Hashem as well as fulfilling the mitzva of charity.

The Jewish community has also been helping out with relief efforts after the Grenfell fire, as synagogues across London and even beyond have been offering help:

Jewish communities across London reached out to help the dozens of families affected by the fire that engulfed the 24-storey Grenfell Tower block of flats in west London in the early hours of Wednesday.

Holland Park Synagogue, part of the Spanish and Portuguese Jewish community, issued an urgent appeal to members to donate items for victims of the nearby disaster, which was known to have claimed 12 lives by 6pm yesterday.

A shul spokesman expressed “our horror at the tragic event,” telling members that those who lived in the tower had “lost everything… anything you can do to help will be much appreciated”. They said the shul “will be collecting clothes and toiletries on Sunday morning” and encouraged members to donate to a Just Giving crowdfunding page.

Elsewhere, New West End Synagogue in Bayswater has organised a collection on Sunday.

Synagogues as far away as Hertfordshire joined in the relief effort, with Borehamwood shul starting a communal collection yesterday evening.

Here again, the Jewish community has fulfilled a huge mitzvah of charity as well as making a great kiddush Hashem. May all the relief efforts be successful, may the bereaved be comforted and wishing  a speedy recovery to the injured.

On the subject of giving charity outside of one’s community, here is another wonderful and heart-warming story. A Palestinian man was so pleased with his treatment in Rambam Hospital in Haifa that he donated money to build a new recovery room in the hospital:

A Palestinian man donated tens of thousands of shekels to the Rambam Health Care Campus in Haifa to improve treatment of childhood cancers and Israeli-Palestinian medical cooperation after he himself underwent cancer treatment at the Israeli hospital. 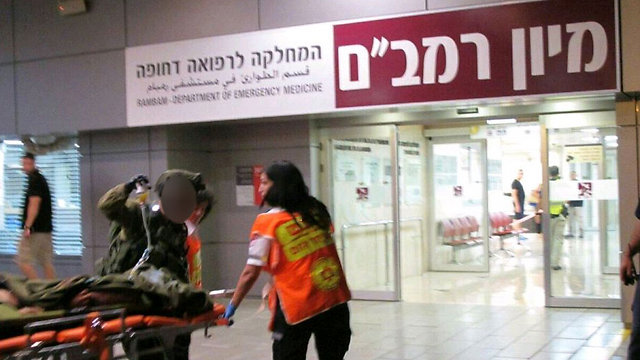 “When I arrived at Rambam (Hospital), I saw a medical team caring for patients, but I also saw the suffering of the sick children,” recalled M. in a statement (Rambam Medical Center spokespeople said they were not at liberty to reveal the man’s identity). “Palestinian, Israeli, Syrian and children from other countries receive treatment in the hospital for a variety of serious illnesses and need all the help they can get. I decided to contribute as much as I could, both a humanitarian act and a symbol of solidarity.”

After completing treatment, M. underwrote the establishment of a children’s recovery room in the Institute of Radiology, inside the oncology center. The room provides a relaxing and supportive environment for children before and after chemotherapy and radiotherapy treatments, among others.

The oncology center opened its doors in June 2016, but due to lack of funding, patients still receive radiation therapy in a different building. This accessibly problem requires patients walking outside to get to the current location of Rambam’s radiation therapy equipment when moving them hinders their recovery.

Rambam estimates, that approximately 1,200 Palestinian children and adults from the Palestinian Authority and Gaza visit the hospital every year for cancer treatment.

“Israeli and Palestinian both societies suffer from the damage of violence and I am striving towards a situation where we can all contribute to peace and health,” continues M. “One where we can take care of children, save lives, share knowledge and train Palestinian doctors at Rambam Hospital.”

What an amazing man is the mysterious M. It is not a given in any society that anyone would donate so much money in one go to a hospital. And for a Palestinian to give to an Israeli hospital is doubly wonderful! First, for the generosity of spirit expressed by teh donor, and secondly because unfortunately too many Palestinians have abused Israel’s goodwill and generous health service to try and attack us.

Moving now to a completely different subject (via The Muqata): the pilot who flew PM Binyamin Netanyahu’s plane to Greece this week is … drumroll…. a haredi woman! For anyone who knows the hared (ultra-Orthodox) community, this is extraordinary news! Read her amazing story:

When Prime Minister Benjamin Netanyahu takes off to Salonika Wednesday afternoon [this was earlier this week -Ed.] [for a trilateral summit meeting with Greek and Cypriot leaders], his EL AL aircraft will be the first flown by an ultra-Orthodox, female Israeli pilot, Yedioth Aharonoth reported.

At the helm will be Captain Yinon Hadar and his first officer, Nechama Spiegel Novak, who was the first Haredi woman accepted into the El Al pilots’ school in 2015 and graduated successfully several months ago.

The pilot Nechama was educated at Beit Yaakov institutions in Jerusalem, she is married, has four children and lives in a Haredi community in the Jerusalem area. At the age of 20, she became infected with the aviation bug and took flying lessons in the US. She received an American pilot’s license and has since been trying to be accepted into the EL AL pilot course. Eventually she passed the prerequisite demands, but since she had not served in the Israeli air force, she did not have a sufficient amount of flight hours.

The tenacious Nechama did not give up, however, and flew to the US every year to accumulate flight hours, until, finally, in 2015 she was accepted into the El-Al course.

What an unusual, talented and tenacious woman is Nechama Spiegel Novak! She is a rare breed amongst women in general, not to mention in the Orthodox community. Kol hakavod to her on her persistence and tenaciousness, and kudos too to El Al who accepted her into their ranks. May she go onwards and upwards, always returning safely.

And one last item before we go: a revolutionary scanning technique has revealed hitherto unseen writing from the First Temple period on an ancient shard:

Using a modified household digital camera and a revolutionary new technique for performing multispectral imaging, an interdisciplinary team from Tel Aviv University has discovered never-before-seen Hebrew inscriptions on a First Temple-era shard. The discovery raises the possibility that other “blank” shards from the period may also contain undiscovered texts, and there are now plans for a wider reexamination of all shards from that time period.

A corpus of 91 ink-on-clay shards (or ostraca) written on the eve of the Kingdom of Judah’s destruction by Nebuchadnezzar was unearthed at Tel Arad, west of the Dead Sea, in the 1960s. A remarkable find, the shards were found together on the floor of a single room, and what legible writing was discerned was thoroughly deciphered by top scholars. For the past 50 years, they have been prominently displayed in the Israel Museum.

Containing lists of supplies and orders from military quartermasters, the shards’ value to the study of the Hebrew language, the sociology and the economy of the time period is immeasurable.

Now, though, with the discovery of previously “invisible” words, and even sentences on the “blank” verso side of one of the first shards to be examined with the new technology, the pieces have become still more important.

It is speculated that the majority of correspondence and literature of this historical period was written on biodegradable papyrus. Therefore, most surviving biblical-period Hebrew inscriptions are on ostraca. Once unearthed, however, ink on clay fades rapidly; many shards previously thought of as “blank” have been summarily disposed of at digs or during artifact recording.

The new, user-friendly multispectral imaging technique, developed by a team of applied mathematicians, archaeologists and physicists — co-directed by archaeology Prof. Israel Finkelstein and physics Prof. Eli Piasetzky — will give these “blank” pottery pieces the chance to reveal any hidden treasures.

In an article published Wednesday in the PLOS One peer-reviewed scientific journal, the team describes the experiment in multispectral (MS) imaging it conducted on an ostracon (Ostracon No. 16, Israel Antiquities Authority number: 1967-990, dated to ca. 600 BCE) from the Tel Arad hoard.

The results of the experimental MS imaging were increased clarity of text on the already studied facing side — and the entirely unintentional discovery of new lines of text, undetectable by the human eye, on the verso.

The new text on the verso side of Ostracon No. 16 was discovered by chance. While photographing the known facing text, Michael Cordonsky, the imaging lab and system manager at the School of Physics and Astronomy, had the idea of flipping the shard — just in case — and found three lines of writing from two and a half millennia ago that would otherwise have been lost to the annals of history.

“We thought we had a great technique, but it turns out that we looked for she-asses and found a kingdom,” said mathematician Barak Sober, alluding to the biblical story in which the future king Saul searches for his father’s donkeys and meets up with the prophet Samuel who anoints him.

What a fascinating discovery! And it was revealed almost by accident! Kol hakavod to Prof.s  Finkelstein and Piasetzky and the entire team from Tel Aviv University. I’m sure we all look forward to more fascinating revelations!

And on this thought-provoking note I wish you all Shabbat Shalom!