Knaves rush in where the authorities fear to tread

As I wrote in my previous post, political correctness has severe consequences.  The West in general, not just the British, are slaves to PC-ness and the worst possible thing that one could do to them is to accuse them of Islamophobia or racism.  But if Muslim extremism is not confronted and stopped, whether because of political correctness or because of simple fear that we will be the next victims of Muslim violence, the man in the street is liable to take the law into his own hands.

We saw the upshot of this ineffectiveness of the authorities last night, immediately after the Al-Quds day rallies were over. However this time it appears it was an anti-Muslim attacker who rammed his van into a crowd of Muslim worshippers leaving the Finsbury Park mosque after Ramadan prayers last night, killing one person and injuring 10 others.

One man has died after a white hire van hit 11 worshippers leaving a Muslim welfare centre in north London.

The Metropolitan Police said eight people had been taken to hospital after the collision at the junction of Whadcoat Street and Seven Sisters Road, Finsbury Park. 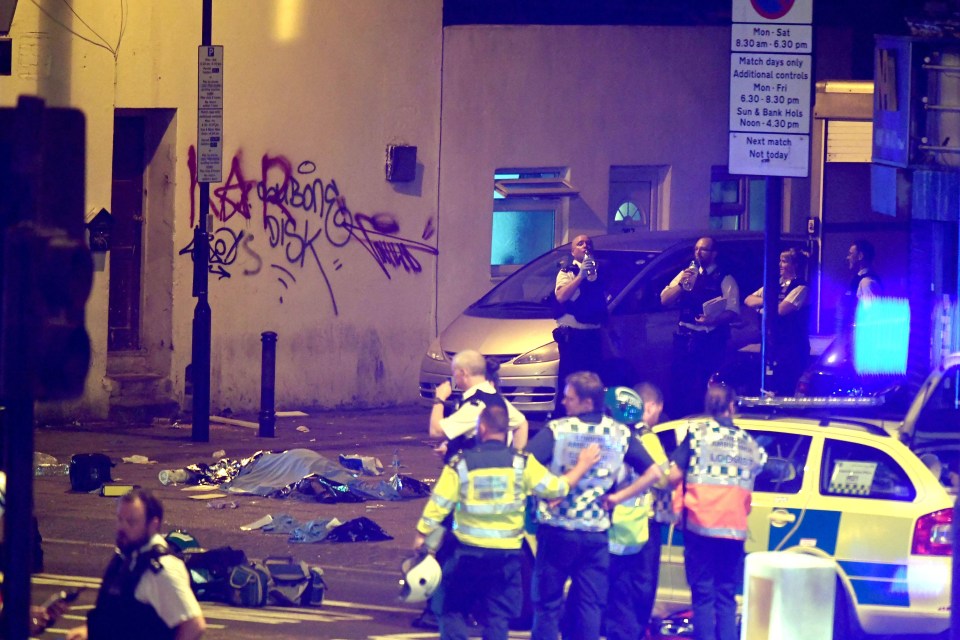 Scene of the car ramming at Finsbury Park Mosque

A further two people were treated at the scene, where police arrested a man who had been held by members of the public amid angry scenes.

According to a witness who asked to be called Abdulrahman, which is not his real name, the driver of the van said: “I want to kill Muslims.”

Another witness, Adil Rana, 24, said: “The van was driving towards us to try and basically hit us at speed.

The Metropolitan Police’s Deputy Assistant Commissioner, Neil Basu, said: “This is being treated as a terrorist attack and the Counter Terrorism Command is investigating.

Toufik Kacimi, chief executive of the Muslim Welfare House, said the man who was arrested had to be rescued by the imam at the centre to stop him being attacked.

Mr Kacimi said when he did so, the driver said to him: “I’ve done my bit.”

In a cynical bit of political bandwagon-jumping, the Mosque spokesman tied the attack to the murder of MP Jo Cox last year:

The Finsbury Park Mosque said in a statement on its website: “This is a callous terrorist attack, which coincides with the murdered MP, Jo Cox, anniversary.”

The Mosque spokesman complained about the lack of security for Ramadan:

Given we are approaching the end of the month of Ramadan and the celebration of Eid with many Muslims going to local mosques, we expect the authorities to increase security outside mosques as a matter of urgency.”

I find this slightly ironic because the Jewish community has been forced to fund its own security for a very long time, in schools and community centers as well as synagogues, precisely because of the hate emanating from that very same Mosque. This is not to excuse the attack at all, but I thought I should just lay that thought out there.

The Times of Israel report adds:

The neighborhood has two mosques, and several hundred worshipers would have been in the area after attending prayers as part of the Muslim holy month of Ramadan, when Muslims fast from dawn to dusk and end the day with an iftar meal at sunset.

British Prime Minister Theresa May called an emergency meeting in the wake of the apparent attack, which she called a “terrible incident,” saying, “All my thoughts are with the victims, their families and the emergency services on the scene.”

The chairman of the Finsbury Park Mosque, Mohammed Kozbar, said the van crash was a “cowardly attack.” He complained that the “mainstream media” was unwilling to call it a terrorist incident for many hours.

It is gratifying to learn that the Jewish community too decried the attack:

“It seems the van went on to the pavement where there were people drinking coffee after their fast,” Rabbi Herschel Gluck of the Jewish security group Shomrim told The Guardian, reportedly after rushing to the scene. “We are here to support the local community. The hurt are predominantly Muslim.”

It was also noted that the Finsbury Park Mosque was once (is it not still?) a hub of Jihadi incitement:

The mosque near Seven Sisters was once a notorious hub for radical Islamists but has since become more liberal. Its former imam Abu Hamza was jailed for life in New York on terrorism charges in 2015. He preached there from 1997 to 2003, and was later extradited to the United States.

This is the Finsbury Park Mosque involved and its previous leader, which might explain why the attacker chose this particular target:

The mosque became notorious when Abu Hamza al-Masri became the imam in 1997. Hamza, who had one eye and no hands and used hook devices, lied that the injuries were suffered when he fought for al-Qaeda against Russian forces in Afghanistan.

The mosque became a meeting point for militant Islam’s most notorious figures. Zacarias Moussaoui, 9/11’s alleged 20th hijacker, and shoe bomber Richard Reid, were among those to attend the mosque.

Hazam was suspended from Finsbury Park Mosque in April 2002 and sacked in February 2003 by the Charity Commission, a government body that regulates charities in England and Wales.

Hamza continued to preach his particular Islamist rhetoric outside the mosque until he was arrested in 2004 by police on charges of acts of terrorism. The terrorism charges were dropped but Hamza was kept in jail as US authorities sought his extradition.

Hazam was then charged by UK authorities with 15 various offences, including encouraging the killing of non-Muslims, and intent to incite racial hatred. He was found guilty of 11 charges in February 2006 and jailed for seven years.

After a lengthy extradition battle, Hamza was found guilty in New York in May 2014 of conspiring in a deadly kidnapping of 16 Western tourists in Yemen in 1998, trying to set up an al-Qaeda training camp in Oregon and aiding al-Qaeda. Hamza, a former strip club bouncer, also revealed his injuries were received at an al-Qaeda training camp in Pakistan.

He was sentenced in January 2015, to life in prison without the possibility of parole.

The social media have been buzzing with comments about the double standards in the reaction of the authorities to this van-ramming as opposed to those carried out by Muslims against others. This Facebook post is a good example, and expresses the feelings of many:

Last night’s likely lone wolf revenge attack in Finsbury Park is being labelled “terrorist” by the UK media more quickly and unequivocally than Manchester Arena, London Bridge, and all the assorted Islamofascist atrocities across Europe and the world. And surely, in the light of those, the various ‘British’ Islamic associations can find reasons/explanations for last night’s incident, when they do so easily for those of their murderous coreligionists. Sickening.

If the British authorities, or those anywhere in the civilized world, do not get off their backsides and start dealing strongly and swiftly with the jihadists in their midst, then they cannot be surprised when citizens decide to take the law into their own hands.

However, note to any potential anti-Muslim terrorist: The radical Muslims will not learn the lessons a counter-terrorist will want them to learn. They will just draw the conclusion that they’ll have to carry out even more terror attacks in order to teach us heathens a lesson.

And the loop will continue as the West will learn the wrong lesson – let’s leave the radical Muslims alone because they’ll kill us.

Britain is in a very dangerous situation. However bad it is in Israel, how many counter attacks have there been by Israelis? And I don’t count graffiti on mosques or Arab cars etc. We can count them on the fingers of one hand. That’s because we trust the police and IDF to do their job, and we count on the courts to put the terrorists away. The fact that they get swapped in prisoner deals is a very dangerous thing for the same reason. But in general we know that the authorities will do what they should. It seems that in the UK at least people are obviously not feeling that.   Whether it’s justified or not, this feeling that citizens have been abandoned by the authorities is what causes counter-attacks.

Again, this is NOT to condone the attack or give it any support. On the contrary. Attacks like these can only lead to more counter and counter-counter attacks. They could bring Britain to the verge of civil war. The government MUST step in before it’s too late!

A good place to start would be the banning of next year’s Al-Quds day rally.