UNESCO’s Jihad against Israel and its Jewish history

Readers of this blog, in fact anyone who has been paying the slightest attention, cannot have failed to notice the UN’s antipathy towards Israel. But probably the worst institution in this regard is UNESCO, which has steadily, and not so slowly, adopted the Palestinians’ most extreme positions on the status of Jewish historical and holy sites in Israel.

Here is a non-exhaustive list of UNESCO’s anti-Jewish resolutions:

I would stress that by denying the Jewish history of these holy sites, UNESCO is also denying Christian history, since the latter is built on the former. It is very sad that we have heard hardly a word in objection to this perversion of history from the Christian establishment.  Greer Fay Cashman of the Jerusalem Post, made this exact point in her Facebook post:

On Friday, UNESCO fired their next salvo against the Jews at the prodding of the fakest nation in human history, the Palestinians, by declaring the Machpela Cave, or the Cave of the Patriarchs in Hebron, as “an endangered Palestinian site”.

The Cave of Machpela, or the Cave of the Patriarchs, in Hebron

The Machpela, just to remind you, is the traditionally recognized burial place of the Jewish patriarchs and matriarchs: Abraham and Sarah, Isaac and Rebecca, and Jacob and Leah.

Grave of Avraham Avinu, our forefather Abraham at the Cave of Machpela, Hebron

Grave of Sarah Imenu, our Foremother Sarah, at the Cave of Machpela, Hebron

The meeting was not very diplomatic, but that did not prevent the perverse resolution:

The United Nations Educational, Scientific, Cultural Organization (UNESCO) passed an anti-Israel resolution for the second time in less than a week on Friday, voting in a stormy session to have the Tomb of the Patriarchs, in the Old City of Hebron in the West Bank, inscribed as a Palestinian world heritage site in danger.

Twelve countries voted in favor of the move to inscribe Hebron’s Old City, including the Tomb, as an endangered heritage site, while three opposed it. Six countries abstained.

Votes to inscribe sites onto UNESCO’s World Heritage List are usually done by a show of hands among all the member states. But three countries — Poland, Croatia and Jamaica — requested a secret ballot. Several states objected, leading to a shouting match between delegates, and Israeli Ambassador Carmel Shama-Hacohen storming to the desk of the session’s chairman to make Israel’s case. The kerfuffle ended after the chairman, a Polish diplomat, called in security.

Shama-Hacohen accused the session’s chairman of not conducting a truly secret ballot, as the chairman ordered the delegates to come up to the front of the hall and put a sealed envelope into a box in front of the other diplomats. The Israeli envoy claimed he was promised the vote would take place behind a curtain, hoping that would enable delegates from moderate Arab states to reject the Palestinian-led bid.

The list of those “enlightened” countries makes it clear that there is no possibility of Israel receiving a fair hearing at that institution while they are on the committee.

“This attempt to sever the ties between Israel and Hebron is shameful and offensive, and eliminates UNESCO’s last remaining shred of credibility. To disassociate Israel from the burial grounds of the patriarchs and matriarchs of our nation is an ugly display of discrimination, and an act of aggression against the Jewish people.”

Besides UNESCO’s declarations against Jewish links to holy sites, UNESCO has also placed other places in Israel “in danger”:

The Tomb of the Patriarchs, revered as the Biblical burial place of the Jewish patriarchs and matriarchs, is now the third cultural site on UNESCO’s “List of World Heritage in Danger” that is registered as located in the “State of Palestine.” The other two are the birthplace of Jesus in Bethlehem and the “cultural landscape of Southern Jerusalem,” around Battir.

Israel says the Hebron resolution — which refers to the city as “Islamic” — denies thousands of years of Jewish connection there.

“They are trying to rewrite Jewish history and the history of the region,” he said.

The @UNESCO decision on Hebron & Tomb of Patriarchs is a moral blot. This irrelevant organization promotes FAKE HISTORY. Shame on @UNESCO 👎

In response to this disgraceful resolution, Binyamin Netanyahu cut another $1 million from Israel’s contribution to the UN:

Prime Minister Benjamin Netanyahu announced Friday that Israel would further reduce the amount it gives annually to the United Nations in membership fees by another $1 million following a decision by the United Nations Educational, Scientific, Cultural Organization (UNESCO) to list the Old City of Hebron in the West Bank as an endangered Palestinian world heritage site.

Not only is the money being cut – it is going to be used for a Jewish museum in Hebron itself:

In a statement Friday after UNESCO passed its Hebron motion, Netanyahu said the funds would instead go toward “the establishment of a ‘Museum of the Heritage of the Jewish People in Kiryat Arba and Hebron’” and to other projects related to Jewish heritage in Hebron.

“In the face of UNESCO’s denial, the prime minister is determined to present to the whole world the historical truth and the thousands of years of deep Jewish roots in Hebron,” the Prime Minister’s Office said in a statement Friday.

I don’t understand why Israel is contributing one cent to the UN. We don’t gain anything from that biased institution. In fact all we get from them is bile and contumely, lies and condemnations, delegitimization and cultural warfare.

The American Ambassador to the UN, Nikki Haley, condemned the Hebron declaration in no uncertain terms, calling it an affront to history:

WASHINGTON — Hours after UNESCO declared the Tomb of the Patriarchs, in the Old City of Hebron in the West Bank, an endangered Palestinian world heritage site, US Ambassador to the United Nations Nikki Haley said the move was both “tragic” and an “affront to history,” and that the US would review its ties with the world body as a result of the decision.

“The UNESCO vote on Hebron is tragic on several levels. It represents an affront to history,” Haley said in a statement.

The resolution, she said, would stultify ongoing attempts by the Trump administration to renew Israeli-Palestinian peace talks, a major foreign policy priority for Washington.

“It undermines the trust that is needed for the Israeli-Palestinian peace process to be successful,” she said. “And it further discredits an already highly questionable UN agency. Today’s vote does no one any good and causes much harm.”

She went on, “The United States is currently evaluating the appropriate level of its continued engagement at UNESCO.” 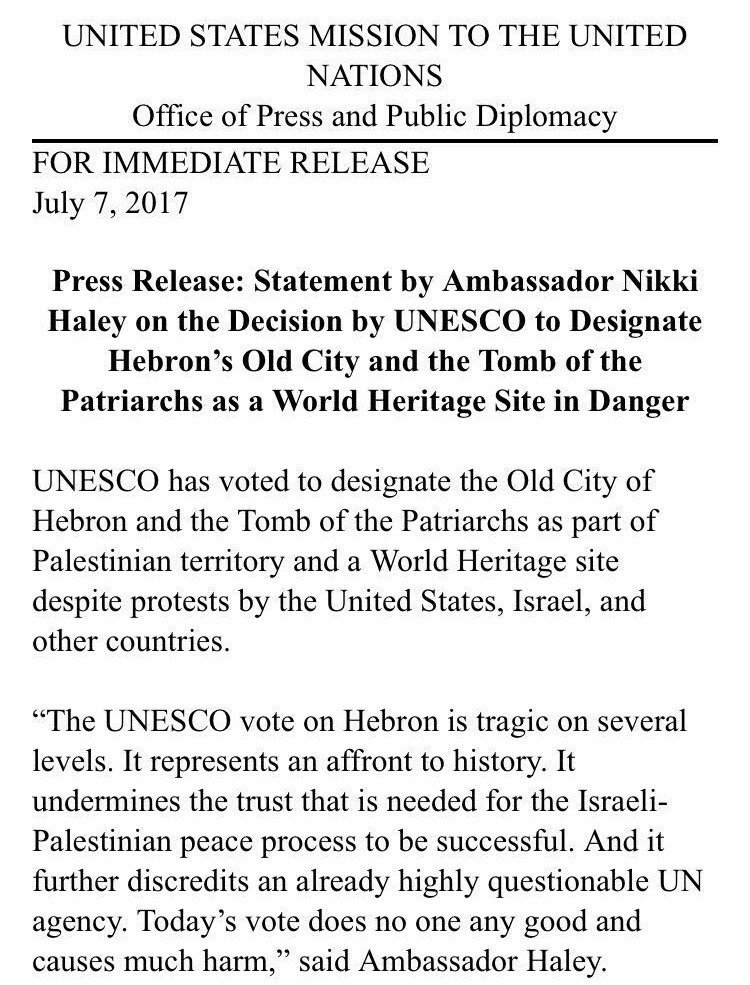 Prof. William Jacobson at Legal Insurrection notes that UNESCO’s declaration in fact contradicted one of its own experts!

This was contrary not only to history, but also a UNESCO group of experts (ICOMOS), who had declined to recommend the proposal, said the Palestinian heritage request was too focused on Muslim history, and was weak, as it neglected Jewish and Christian history at the place before the Mamluk period.

“A further weakness is the definition of the property as a Mamluk town, as this excludes the extremely important time depth of Hebron, a town whose history can be extended back at least a thousand years before the Mamluk period and possibly much longer,” ICOMOS said.

“Although it is stated that the nominated property is thought to be one of the oldest cities continuously inhabited in the world, the emphasis of the nomination is on a small period of that history in the form of the Mamluk town, apart from the earlier structures of the Al-Ibrahimi Mosque/The Cave of Patriarchs.

“This means that the association of Hebron with Jewish and early Christian societies is given little recognition, and Tell Rumeida [an area of Biblical Hebron] and other sites are excluded from the boundaries,” the report continued.

Prof. Jacobson also provides us with a short history of the 3,000 year Jewish presence in Hebron, which was only brought to a bitter end following the 1929 massacre of the Jewish residents of Hebron:

Prof. Jacobson concludes his article with this stark warning and timely reminder that this battle is no mere cultural battle, bad as that is. It is religious warfare:

In this connection, with perfect timing, Rabbi Jonathan Sacks, former Chief Rabbi of the UK and one of the foremost thinkers and statesmen in the Jewish world today, spoke last week at the House of Lords on the centenary of the Balfour Declaration. His words were not just relevant for the occasion – they form the vital lesson that UNESCO refuses to learn. As he says in his speech:

Here is the speech:

Here is my speech from yesterday’s debate in the House of Lords on the centenary of the Balfour Declaration. In it, I explain three reasons why the Balfour Declaration was a significant moment in history, and why I urge Her Majesty’s Government to acknowledge the State of Israel as a living testimony to the power of hope to triumph over hate. Please share this video and help spread this message across the Facebook community and beyond. Thank you!

This is the essence of the cultural Jihad that we have been forced to confront:

It is shameful that Jews have to fight for right to exist in the land that for 33 centuries they have called home”.