This morning Palestinian terrorists opened fire near the Lion’s Gate entrance into the Old City of Jerusalem, critically injuring two Israelis (apparently security forces) and moderately injuring one more. They then fled to the Temple Mount, or in their opinion the Al-Aqsa Mosque compound, and continued shooting from there. Israeli policemen finally killed them there.

UPDATE: Sadly, it was announced that the two critically injured policemen have died. Both were young Druze officers.

Speaking to the press after the attack, Israel Police Commissioner Roni Alsheich said: “This was a tough morning for the police. We have two people killed, officers, who paid the dearest price in this battle.”

Sitawe, 30, hailed from the town of Maghar, a mostly Druze and Arab city in northern Israel.

Shnaan, 22, was from the Druze village of Hurfeish, also in northern Israel.

Sitawe joined the Border Police as part of his mandatory national service instead of serving in the military. He joined the Israel Police in 2012 and has served in the unit responsible for securing the Temple Mount ever since.

He leaves behind a wife, Irin, a three-week-old son, his parents and three brothers.

Shnaan joined the police directly after high school. He decided to stay on the police force seven months ago, signing on as a career officer.

He was the youngest son of a former Labor Party Knesset member, Shachiv Shnaan. His engagement party to his girlfriend was to be held next week.

Shnaan leaves behind his parents, one brother and three sisters.

Both Shnaan and Sitawe were posthumously promoted to the rank of master sergeant.

What a terrible loss! May their families be comforted among the mourners of Zion and Jerusalem and may their memories be for a blessing. יהי זכרם ברוך

In stark contrast to the loyal Arab policemen who gave their lives to defend Jerusalem, the terrorists were Israeli citizens of the Arab town of Umm al Fahm – and all of them had the same name:

The Shin Bet security service confirmed that the terrorists who carried out the attack were Arab Israelis from the city of Umm al-Fahm, which had also been under a gag order, which was lifted shortly before noon.

What are the leaders of the Israeli Arab community going to do to prevent such terror and incitement from their community?

Medics treat victims of a shooting attack on the Temple Mount in Jerusalem’s Old City on July 14, 2017. (Magen David Adom)

Arutz Sheva has the initial story:

At least two people were critically injured on Friday morning in a terror attack at the Lions Gate in Jerusalem’s Old City.

An additional victim was injured moderately, and is fully conscious. He sustained a wound to his upper body.

Initial investigations show that three terrorists left the Temple Mount armed, and walked towards Lions Gate. They then spotted police officers and shot at them, then escaped back towards the mosques on the Temple Mount.

Police officers chased after the three terrorists and caught up to them, eliminating all three.

A search of the terrorists’ bodies revealed a pistol and two Carl Gustav guns.

Aussie Dave at Israellycool has dramatic video footage of the attack:

Note how in this next video one of the terrorists gets up, before being killed. Show that to all the “experts” who think shooting to kill a terrorist is not the way to go.

The implications of this attack, taking place on the most volatile spot on Earth, the Temple Mount, cannot be overstated. This could be the trigger provoking an all-out religious war. It could also finally provide Israel with the justification for either closing off the Temple Mount to Muslim prayer altogether, at least temporarily, or – preferably in my humble opinion- to allow free and full Jewish prayer on their holiest site.

But no, Binyamin Netanyahu has ordered a continuation of the status quo for fear of igniting yet more violence. You might think that this is a reasoned, sensible position to take given the circumstances, but a quick look back at recent history shows that Israeli concessions, or simply non-escalation, bring us no less terror and no fewer attacks. In fact, it is only when Israel delivers a harsh response that something resembling calm returns to the streets.

The Times of Israel reports on Netanyahu’s resistance to calls to change the status quo:

The dramatic terror attack at the Temple Mount Friday drew condemnations from across the Israeli political spectrum, including calls to change the long-standing arrangements at the holy site that allow Muslim prayer there but forbid Jewish prayer and religious rituals.

Prime Minister Benjamin Netanyahu fended off the calls with a blunt statement from his office Friday saying, “The status quo will be protected.”

Erdan called the attack “an extremely serious event which crossed all red lines. The investigation is ongoing. We will need to reevaluate all of the security arrangements on the Temple Mount and its environs. I call on all public leaders to act to calm the situation and ensure quiet in Jerusalem.”

The only response to the attack was a temporary closure to the Temple Mount for the day – and I wonder if that closure affects Jews too.

Jerusalem Affairs Minister Ze’ev Elkin said the “cynical use of the Temple Mount as a kind of zone of immunity for incitement and terror has to stop. We’re not eager to [send security forces to] operate on the Temple Mount, but when we must, we will. The very willingness of the terrorists to use the Temple Mount flows from the incitement” heard at the site, which he noted as already led to rioting there in the past.

It is outrageous that Jews cannot make so much as a blessing on a cup of water, move their lips in prayer let alone actually whisper the words, or even cry tears since they are expressing sorrow at the state of our holiest shrine, lest they get ejected from the Mount and are even banned from returning. But Muslims can play soccer there, make picnics, store stones for attacking Jewish worshippers at the Kotel below, and now can openly shoot at Israeli police with no reprisals and no consequences. 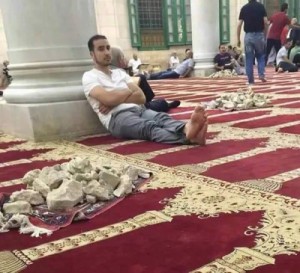 How holy can Al-Aqsa mosque be to the Muslims if they allow such behaviour there, and if terrorists can use it as a launchpad for attacks against Israelis and Jews?

Israel Police reporting that the gunmen shot Israelis at one of the gates & then escaped into the Temple Mount compound. #Jerusalem #AlAqsa pic.twitter.com/6K5STHzaji

For us, the Temple Mount is "a house of prayer for all nations." For them, it's a terror base.

Our thoughts & prayers are with the wounded pic.twitter.com/52X4cY6mS6

Let's be clear: Today's terrorists in #Jerusalem knew police would give chase onto #TempleMount and probably shoot them dead there.

The US Ambassador condemned the attack:

Shocked and horrified by the despicable attack today in Jerusalem. Terrorism must be condemned by all and defeated. We pray for the victims.

9 Responses to UPDATED: Terror attack starts at Lions’ Gate in Jerusalem, continues on the Temple Mount