Tisha B’Av: the centrality of the Temple Mount

The fast of Tisha B’Av is over halfway gone now (Israel time) and we start to emerge from our deep mourning into a more reflective stance. Here are some interesting articles, pictures and videos in the spirit of the day that might interest you, all focussing on the Temple Mount.

Har Habayit (as the Temple Mount is called in Hebrew) has been the focus of the news for the last 3 weeks since we began the mourning period. As most of you will know, Jews are not allowed to freely ascend to the Temple Mount. They must coordinate their visits with the police, and have strict restrictions placed upon them, most importantly the prohibition on Jewish prayer or anything even vaguely resembling this, such as whispering or even crying.

Two bloggers recently documented their difficult experiences in going up to Har Habayit. Here is Varda Epstein’s experience which she describes at Elder of Ziyon. She describes her initial decision, accompanied by doubts, then the preparation and her building excitement. She then gives a graphic description of the security checks (metal detectors are obviously kosher enough for Jews!) and the discrimination against Jewish pilgrims:

The gates opened and we went through security. I had been warned not to bring any prayer books or religious items, but as he looked through my bag, the guard was freaking out about. . . my wallet. It was leather and had a snap on the front. Some prayer books have a similar look. I figured out his concern and told him it was a wallet.

They took everyone’s ID cards as we passed through metal detectors, x-ray, and a manual bag check. After we’d all gone through the security check, a policemen read out the names in the stack of ID cards he was holding, one at a time, looking at us to make sure we matched our photos as he gave them back.

As we waited to ascend, Rivka Shimon, a guide, began to explain what was original to Temple times and what was built by Herod to widen the roads and walkways. She was able to point things out nicely from our vantage point.

I was so excited I breaking out in goose bumps.

She notes the speed with which the Jewish groups are rushed around the Har Habayit. Heaven forfend they should want to spend some time reflecting on the splendor or holiness of the site!

The rest of the visit was kind of a blur. I wanted to stop and see things, touch things, but the policemen rushed us along. We were not allowed to linger. They had cameras on us, filming the entire time. There were at least 7 or more policemen following us. They were making sure we didn’t pray.

Ruthi Soudack at the Times of Israel had a similar experience, and gives a moving description of her feelings upon her visit – so apt for today, calling herself “a prisoner at the Gates of Mercy”:

This group of Jews, visiting its holiest place, is then herded around the perimeter of the Temple Mount by the policemen. It is supposedly for our protection, but it seems to be more for our degradation. They bark at us, barely let us stop to take photos or look at a building, a fountain, a tree. If one of us lingers, or walks two feet in another direction, they herd us back in, like dogs herding cattle. “Hurry up lady. Hurry up. There’s no time,” they yell, after we have waited over an hour to get in.

We are not allowed to go near the platform of the Dome of the Rock, the true Temple Mount. I look with intense envy at the tourists up there, taking their time, going where they want, able to sit with their eyes closed in solitude, or dance or linger…. While I, in my country, in my holiest heart’s place, can’t go near it. They can have the experience I want, but that is denied me.

I feel like those Jews who, before 1967, stood on the roof of King David’s tomb on Mt. Zion, looking towards the Temple Mount with longing. I weep my way through this tour that I didn’t want, feeling the infinite distance of that mere 50 meters that stands between me and the steps up to the platform.That platform where the Temples once stood, that platform now housing the exquisite Dome of the Rock, that platform where everyone except a Jew can go. If there is apartheid in Israel, this is it. I feel the חורבן, the destruction, the desecration. I feel it deeply. And, as befits a חורבן, there is no comfort for this grief.

Because of stories like these, plus the incredible anger felt by the Israeli public at the capitulation of the government to Muslim demands to cancel all security measures put in place after the Palestinian terror attack on the Mount itself, a record number of Jewish visitors requeted to enter the Temple Mount today, on Tisha B’Av. And happily, a record number – over 1,220 Jews! – were allowed in.

One of those visitors was my son-in-law Ido. Accompanied by his father they started off with Vatikin (dawn prayers) at the Kotel, and Ido continued from there alone. Ido says they too were rushed around the Temple Mount, hardly given half an hour from start to finish. Here are his pictures: 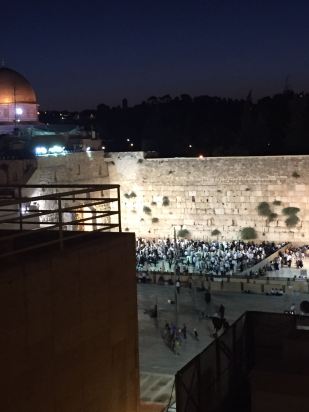 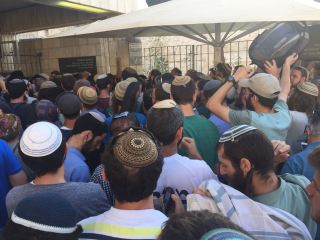 Wooden beams from the First Temple period, left out to rot in the elements, covered only by cloth (photo: Ido Roth) 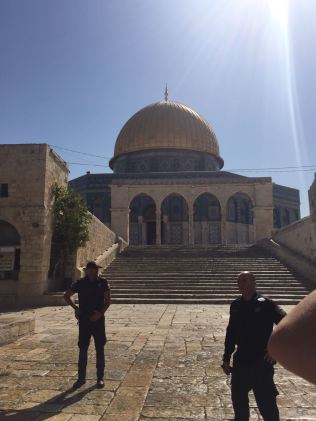 The קודש הקודשים – the Holy of Holies – in inside there.

Until the status quo of Jews being allowed to pray is restored, this outrageous habit of rushing Jewish visitors off the Mount will continue. It seems that this will not happen until Israel final asserts its sovereignty over the site. This leads us to the following article.

As important as the religious aspect of the Har Habayit to the Jewish people is the security aspect. The BESA Center explains why Israeli sovereignty over the Temple Mount is crucial to peace:

… Many partnerships over contested areas have been attempted, and they have led to only one outcome: failure. In 1949, for example, the UN tried to broker deals between Israel and Syria over demilitarized zones delimited in the Armistice Agreement. The three areas were perennial hotspots over which much blood was shed. They were only resolved (as are most Middle Eastern political conflicts) by a decisive victory and the establishment of Israeli sovereignty over the Golan Heights. Before that, it was bedlam. Since then, there have been 40 years of quiet.

The article brings examples of power-sharing deals around the world, from Cyprus to Lebanon to Jordan – and all ended in dismal failure and violence. A similar thing happened to Israel when it signed the Oslo Accords sharing power with teh Palestinians. All Israel got in return was violence and war.

It is therefore clear what must be done to institute peace at the Temple Mount:

There is no doubt that Israel will make a decisive move to reassert the sovereignty it has lost over the past three decades on the Temple Mount, just as it rid Jerusalem of Orient House and destroyed terrorist sanctuaries in major PA towns in 2002. The question is, why wait until more Israelis and Palestinians have been killed or maimed before acting to ensure decisive victory and the reassertion of Israeli sovereignty?

… Now is the time for Israeli sovereignty to shine on the Temple Mount, for the benefit of Muslims and Jews alike.

May Israeli, Jewish sovereignty be asserted over the whole of Jerusalem and Israel speedily in our days.

6 Responses to Tisha B’Av: the centrality of the Temple Mount