It’s Shabbat Nachamu (The Shabbat of Consolation) after Tisha B’Av, the mourning is over, it’s the summer holidays and wedding season, and it’s time for a proper Good News Friday installment at last.

Since my last post was about BDS, I’ll start with the same. An Israeli theatre group that was expelled from the Edinburgh Fringe Festival for the crime of being Israeli is opening once again in Edinburgh. There is an interesting back-story to this. Read on:

Three years ago, in what was an unprecedented move an Israeli theater group was unceremoniously kicked out of one of the world’s most esteemed theater festivals.

The Jerusalem-based Incubator Theater was supposed to perform one of their plays at the festival, but BDS activists disrupted their performances. After exerting pressure on the festival’s management, the latter decided—for the first time in the festival’s 50 years—to immediately cancel the Jerusalemite group’s remaining shows.

Nigel Goodrich, a Christian Scot, looked in abject horror at the Israeli group’s removal and refused to let it pass. In response, he founded the Shalom Festival last year, hosting Israeli artists at several Edinburgh cultural venues, simultaneously with the city’s famous Festival Fringe. The festival is set to take place again next week and promises to be even bigger. 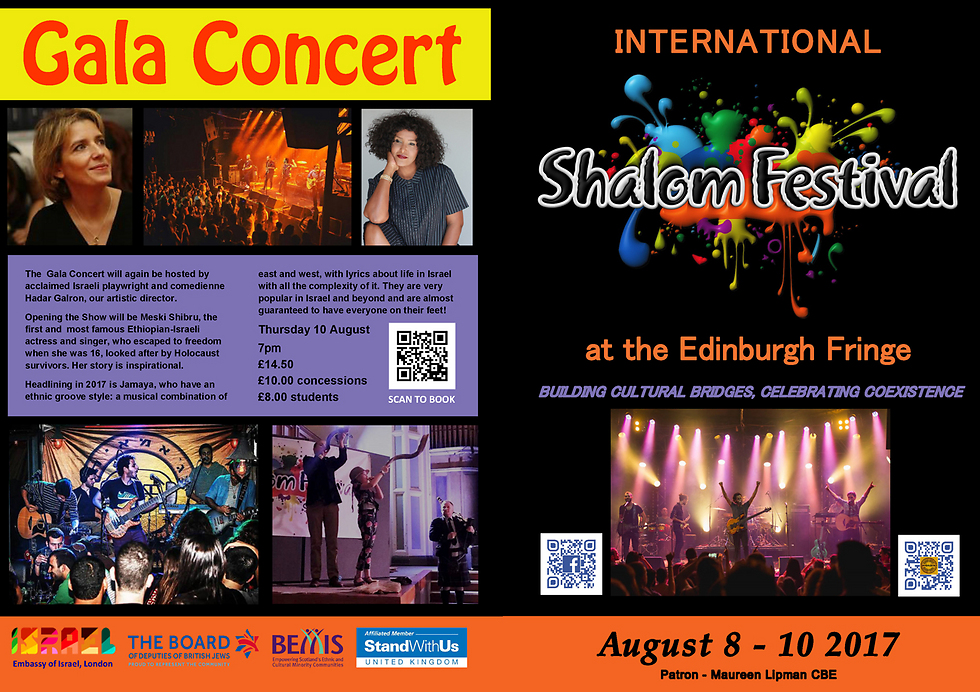 The festival is organized by Confederation of Friends of Israel-Scotland, an organization with 17 branches administered by volunteers who believe in dialogue rather than boycotts.

The festival was funded by contributions from several private donors and will take place over three days next week (August 8-10). On offer will be music, dance and theater performances, cinema and children’s workshops, with an emphasis on Israeli-Arab cooperation in Israel.

The Incubator theater group will put on its play, “The City”, on the festival’s opening night—the very same play that was booed off stage with harsh anti-Israeli statements just three years ago.

Also performing will be actress Meskie Shibru-Sivan, recounting the tale of her Aliyah from Ethiopia, in addition to the Jamaya group, whose members play world music.

Some of the Shalom Festival’s events will be considered an official part of the Edinburgh Festival’s lineup, only this time its directors will not be able to boycott or run off Israeli performances like they did three years ago since the festival is partially funded by British taxpayers’ money. Indeed, Britain enacted a law 18 months ago forbidding boycotting Israel in any publicly-funded event.

Of course those vile boycotters, who wish not to help the Palestinians but to prevent normalization with Israel under any circumstances (even if it harms the Palestinians they profess to love), and ultimately to destroy it, can’t leave well enough alone:

Nevertheless, it seems the Shalom Festival won’t enjoy the peace advocated in its name, as BDS activists have already announced their intention to once again demonstrate, sabotage and torpedo any and all Israeli performances. Consequently, the festival’s management is undertaking many security precautions to prepare for such an eventuality.

But this is not deterring the organizers:

None of this has discouraged the organizers of the Shalom Festival however. Nigel Goodrich, the festival’s director, said: “When the festival is over I’ll be able to say I did the right thing by Israel, the Jewish people and freedom of artistic expression.”

A hearty kol hakavod and huge kudos to Nigel Goodrich for having the courage of his convictions to found an alternate festival – which looks like it will be at least as successful as the Fringe Festival. Good luck to all the actors, directors and organizers! Don’t let the haters get you down.

Moving now to Israel’s biomedical sector, a Hebrew University scientist has helped develop a technology that could reduce the need for animal testing for new drugs:

After spending an average of $2.5 billion to develop a single new drug, sometimes pharma companies have to pull it from the market due to a bad outcome that was not detected in clinical studies.

That’s what happened in 2000, when a promising Type 2 diabetes drug called troglitazone led to unexplained liver damage in one of every 60,000 users.

The troglitazone mystery wasn’t solved until March 2016, when a novel “liver-on-a-chip” platform developed by Hebrew University of Jerusalem Prof. Yaakov Nahmias revealed what no animal or human tests could: even low concentrations of this drug caused liver stress before any damage could be seen.

“It was the first time an organ-on-chip device could predict information to help pharmaceutical companies define risk for [unexplained] toxicity,” Nahmias tells ISRAEL21c.

Shortly before that study, Nahmias’ liver-on-a-chip had revealed a new mechanism for Tylenol poisoning.

He licensed the technology from the university and spun off Tissue Dynamics to provide toxicology analysis of drugs and cosmetics.

Tissue Dynamics’ liver-on-a-chip – as well as heart and brain chips coming soon – could greatly reduce the number of animal tests, the amount of time for drug evaluation and the astronomical cost of drug development. Not to mention the billions that pharma companies pay in damages when a drug proves harmful.

In 2018, the company expects to offer chips simulating a pumping human heart and a human brain that has functional neurons embedded with vasculature.

“Our goal is to have these three major organs, which are the target of a lot of drugs. In 2019 we will complete a large facility for manufacturing the chips,” Nahmias tells ISRAEL21c. “There is a lot of interest.”

Since that initial liver-on-a-chip was built in 2015, his lab has increased capacity and added more sensors and optimized controls. A complete metabolic analysis of a drug molecule that used to take about three months now takes about a week.

This is a fascinating and revolutionary development. It has enormous positive implications both for those who care about the well-being of animals but more importantly, for the more accurate testing for humans. Kol hakavod to Prof. Nahmias on his brilliant invention.

On a similar subject, Weizmann Institute researchers have discovered a cell that could help in the treatment of Alzheimer’s disease:

Scientists at Israel’s Weizmann Institute have discovered a new type of brain cell that could lead to the future treatment for Alzheimer’s disease.

The research group has discovered a new subset of microglial cells, which are the brain’s immune cells. The new cells, which they called disease-associated microglia (DAM), are not found in the brains of healthy mice, and are correlated with the onset of Alzheimer’s disease. Not only this, the scientists were also able to identify the specific proteins that cause the development of DAM cells.

The group used a “genetic microscope” – which was recently developed in the lab of co-head researcher Prof. Ido Amit – to analyze the immune cells in the brains of a mouse model that was engineered to have human genes with Alzheimer’s disease.

Importantly, the scientists were able to identify several proteins that caused disease-associated microglia cells to develop. Normally, microglial cells have a specific composition of proteins that allows them to function properly. This includes regulatory proteins that restrain microglia activity in the brain, and proteins such as TREM2, which recognizes the accumulation of fat-like molecules and dead cells. When the protein composition changes (due to mutations, or changes in quantity), the microglia cells transition into DAM cells.

In other words, mutations or changes in certain proteins, which usually occur due to genetic or environmental failures, cause early and dramatic onsets of Alzheimer’s disease.

The potential for therapy

“This is a completely new concept in comprehending Alzheimer’s disease…, the insight that microglial checkpoints, which are imperative for normal function, become an obstacle in the diseased brain,” Amit said in a statement.

If scientists can figure out how to prevent the proteins from mutating, or identify proteins that stop DAM cells from developing, it will have significant potential for Alzheimer therapy.

This potential therapy could go hand in hand with similar research from Ben Gurion University. Kol hakavod to Prof. Amit and his research team on their remarkable discovery. May it be bear fruit and lead to a successful cure for this terrible disease.

And now we head for the stars as we follow Venus, Israel’s first research mini-satellite, which was successfully launched this week:

The country’s first environmental satellite is a major project of the Israel Space Agency and the French space agency CNES. It was launched together with the OPTSAT3000, an advanced observation satellite designed for use by the Italian Defense Ministry.

Science, Technology and Space Minister Ofir Akunis, who observed the launch at the control room of Israel Aerospace Industries along with ministry director-general Peretz Vazan and Israel Space Agency director Avi Belsberger, said: “This is a morning of national pride for us.

“Venus is another testament to Israel’s vast technological capabilities in all fields, and we are a force of science, technology and space with which the whole world wants to cooperate. The findings that will be sent by the satellite will include data on the environment, agriculture, water and food,” added Akunis.

Environmental satellites have become very important in recent years because of problems on Earth resulting from crowding of the population, the decline in space for agriculture and raising food, pollution and natural disasters.

Weighing only 265 kg., Venus reached its position of 720 km. above Earth within 37 minutes and 18 seconds. The first sign with preliminary data was received on the ground five-and-a-half hours after launch, but the initial images will arrive a week later. Processed images will be sent to users three months after launch. Venus is due to remain in operation for 4.5 years, after which it will be shifted to a lower trajectory.

Some 110 research areas will be photographed around the world. When the satellite passes over Israel, Venus will photograph three swaths in the Galilee, the coastal area and the Negev where most national parks, forests, ecological stations and nature areas exist. The photos will also benefit university, government and state research institutes.

Although Venus is a joint project of Israel and France, all of the satellite’s hardware components were developed in Israel’s space industries.

Wow, this is amazing! To consider that tiny Israel with a fraction of the population and budget of larger countries has joined the international space-race and is a major participant is quite mind-boggling considering all the other challenges that Israel faces. Kol hakavod to Ofir Akunis, Minister for Science, Technology and Space, and to everyone else involved in this great project!

And now, to conclude, let’s come back down to earth, closing the circle in a way. After all the violence, mayhem and murder in Jerusalem and Halamish, here is a wonderful example of co-existence:

May the merit of our Mother Rachel stand by them for blessing and salvation, to always do good, and we say “Amen!”.

Coexistence at the Tomb of Rachel: Muhamad and Ali decided to donate the refreshments for the end of the fast of Tisha B’Av at the Tomb of Rachel. The managers of the site did not get confused, and prepared a placard with the names of the donors to be included in the prayers.

With this comforting thought – how appropriate for Shabbat Nachamu – I wish you all Shabbat Shalom!