Posted on 1 September 2017 by anneinpt

Let’s start with the not-so-good news of Hurricane Harvey which has slammed into Texas, causing devastating flooding in Houston and surrounding areas. The bright spot in this terrible event is the help that Americans have been extending to each other – the media has been full of stories of heroic people helping out stranded victims, even at risk to their own lives. Another very bright spot, of which we can be so proud, is the aid being sent to Texas by IsrAID, Israel’s foreign aid agency.

Seven members of the IsraAID non-governmental organization flew to Houston, where they will join three other members of the group who were already in the United States when Hurricane Harvey brought torrential downpours over the weekend, flooding homes and causing widespread damage. Harvey was later downgraded to a tropical storm.

IsraAID co-director Navonel Glick told The Times of Israel that among the group are disaster management experts, mental health experts, and engineers. They will focus on coordination of relief work and provide basic needs including stress relief activities and recreation for those impacted by the disaster.

“The biggest challenge is always coordination in situations like these,” Glick said.

The disaster is unfolding on an epic scale, with the nation’s fourth-largest city mostly paralyzed by the storm that has parked itself over the Gulf Coast. With nearly two more feet (60 centimeters) of rain expected on top of the 30-plus inches (76 centimeters) in some places, authorities worried the worst might be yet to come.

Dozens of Jewish families in Houston were either evacuated or moved to the second floors of their homes due to flooding caused by Hurricane Harvey, the local Jewish Family Service said.

B’nai Akiva emissary Rafi Engelhart sets out with a neighbor who is an EMT to rescue stranded Houstonians from Tropical Storm Harvey, August 27. (Courtesy)

Glick said the IsraAID team will work with state authorities and aid groups including those of the Jewish Federation in Houston as well as others connected to Jewish communities in the area, he said.

In the coming weeks they will also help out with clearing away the debris left behind by the storm waters.

One of the volunteers in the IsrAID delegation is not quite your usual volunteer: Miriam Ballin, a haredi female psychotrauma therapist:

JTA – Jerusalem therapist Miriam Ballin is the kind of person who takes the initiative.

Despite resistance from her ultra-Orthodox community, she became a medic. Then she launched a pacesetting psychological first aid unit. Clearly she was not just going to stand idly by while Tropical Storm Harvey flooded her native Houston. 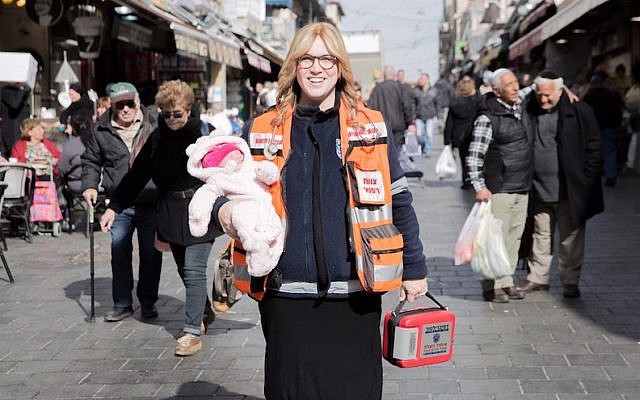 So on Wednesday evening, Ballin left her husband to watch their five young children and headed to southeast Texas, where she and six other Israeli mental health professionals will help locals cope with the flooding. Their work will be guided by hard-won experience responding to local emergencies, including dozens of terrorist attacks.

“I just feel it’s necessary and needed, and simply the right thing to do,” she said. “When we have 150 people who have been trained to deal with exactly this, not to send them to Houston to help out is I think wrong.”

In addition to her day job as a family therapist, Ballin, 33, is the head of the psychotrauma unit of United Hatzalah, a mostly ultra-Orthodox volunteer emergency service based in Jerusalem. She spearheaded the creation of the unit last year amid a wave of Palestinian violence to provide psychological support to those experiencing potentially traumatic events.

What an amazing woman! Kol hakavod to Mrs. Ballin and her husband who is so supportive of her.

And of course a huge kol hakavod to IsrAID which rushed in as soon as they could to extend help to the victims of the flooding in Texas.  We can be very proud of our little country!

Unfortunately the Jewish community of Houston has taken a very hard hit in the flooding, but they are all helping each other through the crisis, with Chabad and other institutions, day camps and schools stepping in to provide food and shelter:

Most Houston-area Jewish institutions have been flooded due to Tropical Storm Harvey and a large portion of the city’s Jewish population is living in areas that have experienced flooding, the Jewish Federation of Greater Houston said.

“While we do not yet know the full extent of the damage, we know that most of our Jewish institutions have flooded,” the federation said Monday evening in a Facebook post. “We know that 71 percent of our Jewish population lives in areas that have seen massive flooding and Jews have been displaced from their homes with flooding ranging from six inches to ten feet. We know that close to 12,000 elderly members in our community live in areas impacted by flooding.”

As some two inches of rain fell per hour in the Houston area on Tuesday morning, according to reports, Jewish institutions were pitching in to provide shelter and relief for those affected by the storm.

The Union for Reform Judaism’s Green Family Camp in Bruceville, Texas, announced Monday in a Facebook post that it would be opening up to accept former campers, congregants and friends affected by the storm. The post said the camp could provide housing, food, air conditioning, internet and electricity “for a limited time.”

Meanwhile, Chabad-Lubavitch of Texas is coordinating truckloads of kosher food to be sent to the area and will set up a kosher food pantry available to the Jewish community as supplies reach the area. Chabad emissaries in Houston have been preparing and delivering kosher meals to people evacuated to emergency shelters or who took shelter in hotels, according to Chabad.org.

Again, kol hakavod to the Jewish community for helping each other out, no matter the denomination or political views, in such a humanitarian crisis.

Since we’re talking about saving lives, here’s another new Israeli development in the medical field: in Rambam Hospital in Haifa, an implant was successfully inserted into a patient suffering from congestive heart failure:

A Canadian man who had despaired of finding a treatment at home became the first person to receive a new Israeli implant that treats heart failure, according to a statement from Haifa’s Rambam Medical Center which performed the procedure.

Robert MacLachlan, 72, who suffers from diastolic heart failure — a condition where the chamber of the heart does not fill up with blood properly — said he volunteered to be the first to try the device because he had heard of the Israeli invention and his cardiologist told him of Rambam’s good international reputation. 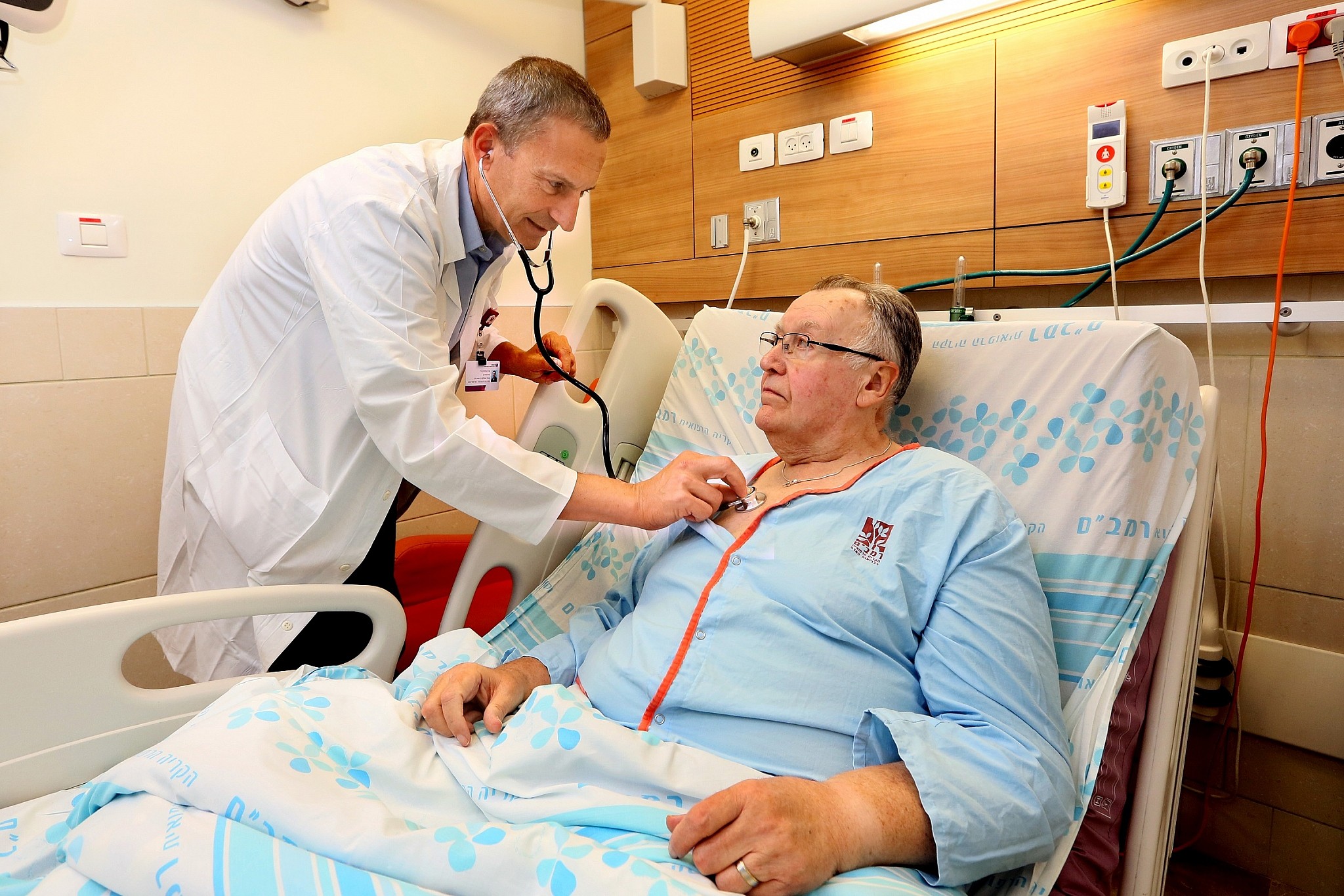 Professor Gil Bolotin (l) with Robert MacLachlan, the first patient in the world to receive the CORolla Implant in Rambam hospital on August 28, 2017. (Pioter Fliter, RHCC)

The hospital did not give further information on MacLachlan’s condition following the operation, except to describe him as “bright-eyed.”

The CORolla device, developed by Israeli startup CorAssist, is an elastic device that is implanted into the left ventricle of the heart while it is beating to improve cardiac diastolic function. It applies direct expansion force on the ventricle wall to help the heart fill with blood.

The CorAssist technology was invented by Dr. Yair Feld, a cardiologist at Rambam Health Care Campus, together with Dr. Yotam Reisner and Dr. Shay Dubi.

Professor Gil Bolotin, director of the Department of Cardiac Surgery, who co-led the team that performed the procedure, explained that while many potential applicants were interested, no one had wanted to be first.

This is amazing good news for sufferers of heart disease! Kol hakavod to Drs. Feld, Reisner and Dubi. Kol hakavod too to Mr. MacLachlan who volunteered to be the “guinea pig” in this treatment. His experience will lead to many more patients being treated. May he continue to a complete recovery, refuah shlema.  Kudos too to his Canadian doctor who recognized Israel’s pioneering in the medical field and persuaded him to go.

And to close this week’s post, let’s wish a huge “Good luck!” – בהצלחה – to all the millions of of Israeli school-children who returned to their schools today (much to their parents’ relief!☺) Amongst the 163,000 (!!) new pupils entering Kita Aleph (first grade) are one of my own granddaughters, plus my two niece’s children!

The nearly 2.3 million Israeli students include some 163,000 first graders, and 123,500 12th graders who are beginning their last year of secondary schooling.

The theme of the 2016-2017 school year was the 50th anniversary of the liberation of the Old City of Jerusalem.

Education Minister Naftali Bennett (Jewish Home) lauded the smooth start of the new school year during a visit to the ministry’s offices in Jerusalem. Under his ministry, there have been no crippling strikes as there were in the past.

May all our beautiful children enjoy their studies and have great success in the coming year. Best of luck too to all the Israeli teachers of which my son-in-law is one, as well as my nephew. (They’ll need it!)

And on this happy note I wish you all Shabbat Shalom!