Posted on 7 September 2017 by anneinpt

Several items of surprisingly good news regarding antisemitism and the delegitimization of Israel have emerged from Germany, of all places, in recent days.

The most important news happened this week, when a memorial center to the victims of the Munich Olympics massacre of the Israeli Olympics team in 1972 was dedicated by Israeli President Reuven Rivlin in Munich:

President Reuven Rivlin on Wednesday attended the inauguration in Munich of a memorial to the victims of the massacre there at the Olympic Games 45 years ago, and castigated the Palestinian Authority for its continued expressions of support for the terror act, which left 11 Israeli Olympians dead.

During the September 1972 attack on the Munich Olympic Village by the Black September Palestinian terror group, 11 Israelis were taken hostage. Two were murdered in the Olympic village and nine others were executed at the airport. A German policeman was killed in a shootout with the terrorists during a botched rescue attempt.

“There are still those who see in the murder of sportsmen a heroic deed,” Rivlin said, before singling out the party of PA President Mahmoud Abbas. “Just last year, Fatah marked the massacre of the sportsmen as an ‘act of heroism.’

“The center we are inaugurating today must be a message to the whole world: There can be no apologizing for terrorism. Terror must be unequivocally condemned everywhere. In Barcelona, in London, in Paris, in Berlin, in Jerusalem, and everywhere else.” 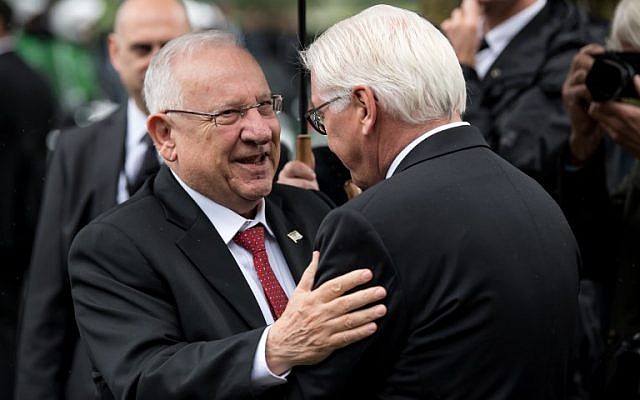 The president, attending the inauguration with his German counterpart, Frank-Walter Steinmeier, Bavaria’s Prime Minister Horst Seehofer, International Olympic Committee President Thomas Bach, and victims’ relatives, also said that having waited 45 years for the memorial, Israel is still waiting for another historical injustice to be rectified, and for a minute’s silence to be observed at the opening ceremony of the Olympic Games to remember Israel’s dead.

“Our brothers who were murdered were not just the State of Israel’s sons,” Rivlin said. “They were the Olympic family’s sons. A family which for many years abandoned its commitment to them.

“’The games must go on’ — so said at the time the President of the Olympic Committee, in a sentence which will be remembered eternally as a disgrace,” he noted.

“For 45 years – almost half a century – the victims’ families, and the State of Israel looked expectantly for this moment: the inauguration of a center of remembrance and a memorial in the Olympic Village.”

In his speech, Steinmeier acknowledged that Germany was unprepared for the attack, even though international terrorism was not a new phenomenon at the time.

“It should have never been allowed to happen,” he said. “Until today, we carry a heavy burden regarding this catastrophe. And this better recognition is part of the commemoration of this day — and I think it’s overdue, and we owe it you, dear family members.”

Steinmeier then turned to the present, noting that there are still people who preach anti-Zionism and anti-Semitism.

“In Germany, our way of life includes inseparably a commitment to our history, a commitment to the history of the Holocaust, the responsibility for Israel’s security that grows out of it, and the rejection of any form of anti-Semitism.”

The memorial is the result of a decades-long campaign by relatives of the massacre victims for a permanent memorial to the athletes. 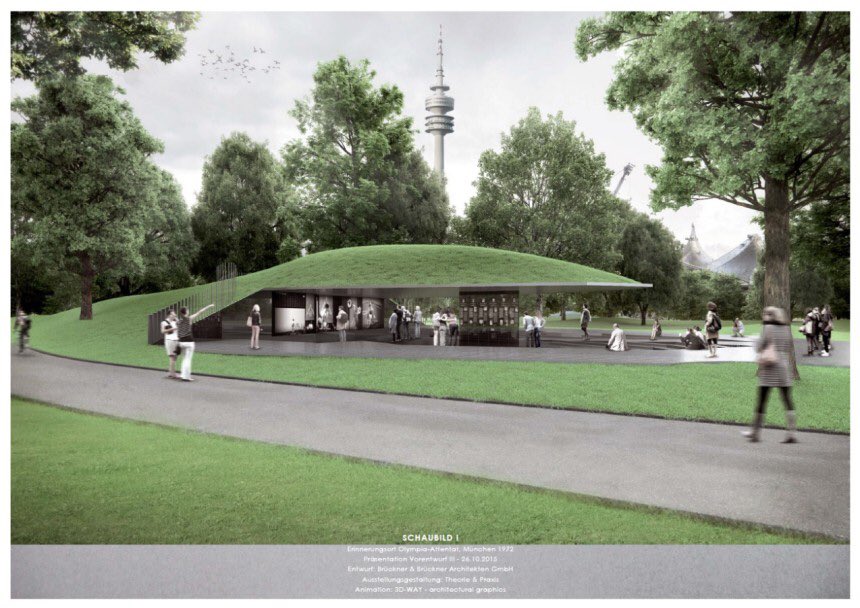 It occupies a large exhibition area and is carved into a grass mound, creating the effect of an open wound. A triangular column in the center of the memorial displays the biographies and photos of those killed on panels with texts in German, Hebrew, and English. A large LED screen plays a 27-minute loop of news footage broadcast during the events of 1972.

Ankie Spitzer, who was 26-years-old when she lost her husband, the coach and fencing master Andre Spitzer, in the attack, was also on hand. 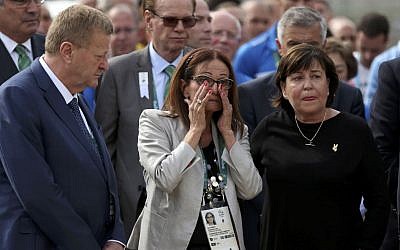 Ilana Romano, center, and Ankie Spitzer, right, widows of Israeli Olympic athletes killed by Palestinian terrorists at the 1972 Munich Olympics, attend a memorial in their husbands’ honor, ahead of the Summer Olympics in Rio de Janeiro, 2016 (AP Photo/Edgard Garrido, Pool)

She told the Deutschlandfunk radio station ahead of the ceremony that she could not deal with the fact that her loving husband had been brutally murdered and “no one regretted it. It took 45 years, but I don’t regret the long and lonely journey that brought us to this day. This is what I wanted.”

It’s “only” 45 years late – one could almost say that it’s not better late than never, since so many years have passed. However kudos to the German government for building this memorial, and I grudgingly praise the Olympics committee for their part in this too. I say grudgingly because their behaviour towards the Israeli victims and Israels’ demands for a memorial have been contemptible until recently.

Interestingly, the words of German President Steinmeier at the Munich memorial regarding anti-Zionism and antisemitism echo the sentiments of Frankfurt’s city mayor, as we learned last week that Frankfurt became the first European city to ban BDS:

Frankfurt City Council approved a bill on Friday that would prohibit the use of municipal funds and facilities for Boycott, Divestment, Sanctions activities targeting the Jewish state.

The measure will now be sent to the city parliament for a vote, slated to take place in a few weeks.

Uwe Becker, the deputy mayor and city treasurer for Frankfurt, who initiated and is steering the legislation to passage, told The Jerusalem Post: “The BDS movement does not only strongly resemble the ‘Don’t Buy from Jews’ argumentation of former times of the National Socialists, but the movement is built on the same toxic ground and it is poisoning the social climate in the same dangerous way.

“BDS strongly attacks the fundamental basis of the legitimacy of the Jewish state and takes a detour via anti-Zionism to spread antisemitism,” Beck added. “That’s why we decided to ban any municipal funding or the renting of rooms for any activities of groups or individuals who support the antisemitic BDS movement. We also instructed our city-owned companies and called upon private landlords to act in the same way.”

Becker said with Friday’s backing by the city government, the bill “has already gained the necessary support.”

Kol hakavod to Mr. Becker on this courageous move, and especially for recognizing the malicious slander underlying the BDS philosophy. Let’s hope that Frankfurt will be a beacon lighting the way for other European cities to follow suit.

Here is a nice thank you video to Frankfurt by Stand With Us (via Reality):

This news has added poignancy for me personally as my maternal grandfather, as well as my father-in-law himself, hail from Frankfurt. Having fled Frankfurt just ahead of the Nazis, it is hart-warming to see the wheel of history turn.

And one last item of very surprising good news from Germany: the religious Zionist youth movement Bnei Akiva has reopened in Germany almost 80 years after it was shut down:

Bnei Akiva Deutschland is one of several Zionist organizations to return to Germany in recent years. In this case, the group’s aim is to encourage Jews to leave Germany for Israel.

Status as a charitable organization was granted in the city of Dusseldorf on August 18 to the German branch of the Jerusalem-based World Bnei Akiva – which already has emissaries in more than seven cities in Germany. It will now intensify its activities. 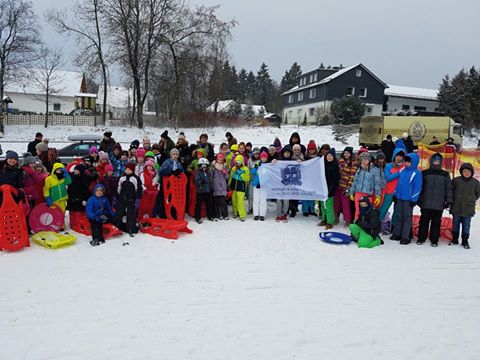 “Another Jewish organization resurrected in Germany is another little victory over the Nazis and the new anti-Semites,” the movements director for Germany, Eliyos Paz, said in a statement. Several years ago, the secular Zionist Hashomer Hatzair World Movement returned to Germany with youth activities.

Unlike Hashomer Hatzair, World Bnei Akiva reaches out especially to Orthodox communities. With emissaries in 23 countries, it also sponsors Jewish programming especially aimed towards Jews from the former Soviet Union, according to the group’s website.

World Bnei Akiva was established in 1910; in 1927, the activities of several Orthodox Zionist groups were united under the Torah and Avodah Fund, which oversaw related youth movements and their activities, such as camps and conferences.

Activities in Germany came to an abrupt end in 1938, when the Nazi regime outlawed most Jewish institutions.

Bnei Akiva is very familiar to Israelis where the movement is extremely popular amongst the religious public. They carry out excellent social and educational programs as well as providing a priceless grounding in Jewish history and identity for youngsters. I am happy to count my own grandchildren amongst its many members.

Kol hakavod to Bnei Akiva for reopening its gates after so many years. May they go on to achieve great success in reaching out to a thirty for knowledge public.

And again, kudos to Germany for its incredible change in attitude towards the Jewish population such that banning BDS, creating a memorial to Israeli victims of Palestinian terrorism, and reopening Jewish youth groups, are now considered par for the course.