The Rogue’s Gallery at the UN Human Rights Council

In the unlikely event that we might have forgotten what the UN is really about (hint: it is not all sweetness and light, or democracy and peace), here is UN Watch’s Hillel Neuer to remind us, as he reports on last week’s Human Wrongs Council debating imposing sanctions on dictatorships. The panel of course was populated by a rogue’s gallery of dictators:

Even within the rogues’ gallery that is the U.N. human rights Council, today’s council panel attacking Western democracies for imposing sanctions on dictatorships was the mother of all rogues’ galleries.

2. Alena Douhan, a Belarus academic with a soft spot for Russia, whose doctorate was on the principle of “non-interference” in countries’ “internal affairs.”

3. Alfred de Zayas, the Cuban-appointed expert for a “democratic and equitable international order.” Zayas has defended Iran’s right to nuclear weapons, and writes books claiming Germany suffered a “genocide” in 1945. Zayas is a hero to Holocaust deniers.

4. Jean Ziegler, co-founder & 2002 recipient of the Qaddafi Human Rights Prize. In his presentation, Ziegler actually defended the murderous Maduro regime of Venezuela, which he said was being victimized by a U.S. “economic war.”

6. Peggy Hicks, a top official in the office of UN high commissioner Zeid, delivered the opening statement. A former Human Rights Watch official, we hoped she would provide a dissenting voice. Instead, she echoed the same line. And when Ziegler spouted pro-Maduro propaganda, Hicks was silent.

UN Watch was also busy with Venezuelan opposition figures who held a panel objecting to the plenary address by the Venezuelan Foreign Minister at the Human Rights Council: 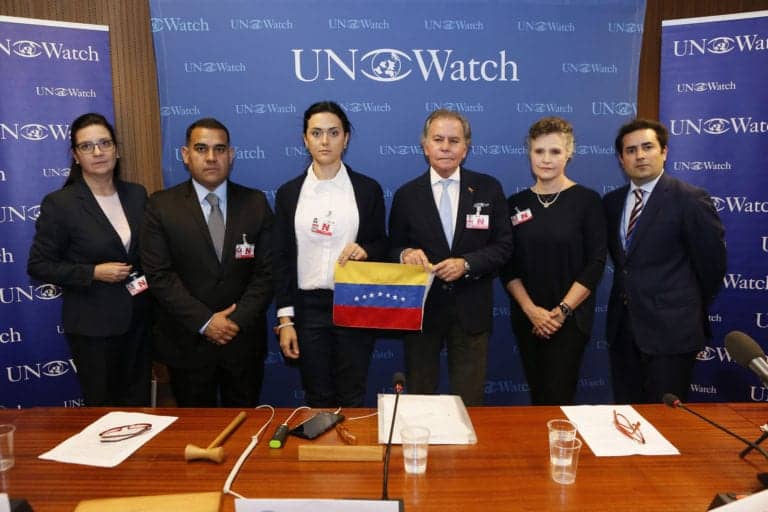 UN Watch, the Geneva-based non-governmental human rights group, together with Venezuela por Iniciative, organized a panel of leading Venezuelan voices, at a side event held below the human rights council chamber, to represent the views of the pro-democracy opposition.

UN Watch has submitted a draft resolution (en español) calling or the suspension of Venezuela from the UNHRC, which has been published as an official UN document.  Executive director Hillel Neuer urged member states, especially Peru on behalf of the Lima Group, to adopt a resolution.

Diego Arria, the former Venezuelan ambassador to the UN and Security Council president, called for the dictator Nicolas Maduro to be indicted by the International Criminal Court. Click here for Arria speech | En Español

Rosaura Valentini, wife of political prisoner Yon Goiechocheca, said people are completely dehumanized. Child mortality declined to 1950s figures. Elderly die for lack of essential drugs. There is widepsread malnutrition. Mayors have been taken prisoner, despite having been chosen by the vote of the people. Violinist playing music was also taken as a prisoner. Hundreds of protesters are taken as prisoners. Click here for UNHRC plenary speech.

Unfortunately it appears that UN Watch’s appeal to bar the Venezuelan Foreign Minister has fallen on deaf ears at the UN HRC. Sadly that was unsurprising. Our expectations from that rogues gallery of villains could hardly sink any lower.

Nevertheless Hillel Neuer and UN Watch have to be commended for their unstinting work in pursuing dictators and tyrants at the UN, showcasing their bias and hypocrisy for all the world to see.