Combatting antisemitism on the streets of London

Posted on 9 November 2017 by anneinpt

One more post about the poisonous atmosphere in Britain where Israel is concerned. While Binyamin Netanyahu was in London for the Balfour centenary celebrations, thousands of ill-wishers took to the streets to protest. What were they protesting? Anything from Israel’s presence in Judea and Samaria to Britain’s responsibility for the establishment of the State of Israel via the Balfour Declaration, through to opposing the very existence of Israel.

Several thousand pro-Palestinians marched through the streets of London on Saturday to protest the centenary of the historic Balfour Declaration that helped lead to the creation of the Jewish state and to denounce Israel.

The marchers held signs reading “Free Palestine” and Justice for Palestine,” while they chanted “Free, Free Palestine” and “Occupation no more.” There were several ultra-Orthodox Jews spotted marching in the crowd, presumably from extremist anti-Zionist sects.

Several people in the crowd called for Israel’s destruction, Israel’s Channel 10 reported, with some chanting “From the river to the sea, Palestine will be free.”

Israeli TV reports said there were some 3,000 marchers, and that two hours after the protests started, several hundred pro-Israel counter-protesters arrived and waved Israeli flags nearby.

The British Jewish pro-Israel activist Richard Millett reports on the smears about the Holocaust  on display at the Palestine Solidarity Committee (PSC) march:

The Palestine Solidarity Campaign cannot kick its smearing-the-Holocaust habit. A banner proclaiming the media is, basically, Jewish-controlled and that Jews are, basically, Nazis (see above) was proudly paraded on the PSC’s anti-Balfour Declaration march through London today. There was no objection to it from any PSC stewards. 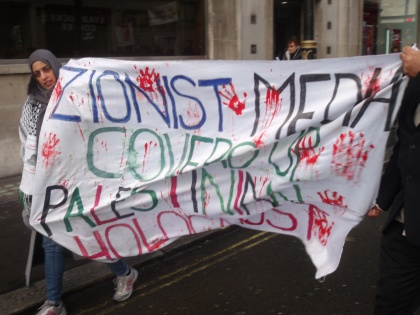 Added to that a woman wearing a Palestinian flag kept repeating there were “concentration camps” in Palestinian villages (part 1 below) and repeatedly accused a Jewish man holding a British flag of being “the anti-Christ” (part 2 below):

Smearing the Holocaust is a common theme now at PSC events and anti-Israel events generally.

However, the streets were not left to the antisemites. The Jewish and pro-Israel community organized a counter-march, and at one point it looked like the Israel supporters were leading the parade! The Zionist Federation posted on Facebook:

That moment when Zionists took the lead of the anti-Balfour, anti-Israel march in Oxford Street, London today and headed off hate.
Priceless.

David Collier, blogger and researcher into antisemitism and anti-Zionism, also reported on the march, with a focus on the role played by British trade unions in this anti-Israel agitation, what he accurately calls their obsession with Israel:

The PSC Twitter feed absurdly suggested 15,000 marched, yet only 2300-2600 walked passed Hanover Square. There may have been a few hundred waiting at Westminster for the speeches, but my head-count for the march itself is supported by full video evidence. The organisers and police had expected about 10,000, so whichever way the organisers wish to spin this, the turn-out was more than disappointing for them. In the end, they thinned the demonstration into groups like a carnival procession, placing a minute or two between them, to make it look far bigger than it was.

Worse still for the organisers, as the procession approached Harewood Place, a group of pro-Israeli counter-demonstrators entered Oxford Street to take up their place at the front of the march. An effective example of guerilla activism that thoroughly annoyed the anti-Israel crowd. From that point on, the first thing anyone saw of the demonstration, was the waving Israeli flags.

Israeli flags hijack the lead in the Balfour Day protest

At least three of the speakers at the static event at the end of the march, negatively referenced the actions of the pro-Israeli crowd, a good indicator of the ‘annoyance’ the activity created. In total, there were about 70-80 pro-Israeli counter-demonstrators present.

As for the unions, supported as they are by the Labour Party:

The obsession of the unions

At the recent Labour Party conference, in discussions I had with both ‘free Syria’ and ‘free Iran’ groups, it became obvious that Labour party activism is being suffocated by the Palestinian cause. Groups supporting real democratic change in the Middle East are not having their voice heard.  If you stand with the Palestinians, you will find yourself in opposition (or left to ignore) most of the real humanitarian causes in the region. Iran, Hamas, Hezbollah become ‘friends’.

So for a moment, we should forget the several hundred hard-core antisemites that walked the streets of London. We need to ask why it is that those people are being supported by British unions, including  Unite the Union, UNISON, NUT, GMB, ASLEF, RMT, FBU, UCU & CWU.

His following words sum up the entire challenge facing pro-Israel campaigners and activists against antisemitism:

There is a knowledge within this small group of Zionists, that is not possessed by most of British society, and certainly not by most mainstream British Jewish organisations. These people see and face down real anti-Jewish hatred on our streets. They see the extremism in the eyes of the opposition, and they know this is a danger that cannot be ignored. On occasions they communicate with anti-Israel activists present, and become aware of the level of ignorance fueling the hate in some of the opposition. And they witness the absurd marriage between the radical left and Islamist positions in horror. The more they see of it, the more they understand it has to be challenged.

David Collier’s words are a warning and a recommendation for pro-Israel activists to be much more pro-active on the social and mainstream media in order to counteract the floods of hatred that swamp the media.

As a side-event to the Balfour celebrations, Netanyahu was interviewed on the BBC by veteran reporter Andrew Marr. As the Campaign Against Antisemitism notes, Marr appeared to blame Israel for the rising antisemitism in Britain, as well as other snide digs at Israel. But Netanyahu did not lose his cool, and put the interviewer straight.

Mr Marr asked Mr Netanyahu: “Can I ask you about the condition of Jews in this country because I’ve got a lot of Jewish friends and there are a lot of Jewish community leaders who are very worried about your government and they say that particularly the settlements issue has made it much, much harder to defend Israel in this country.” However, Mr Marr then added: “We have always had antisemitism in Britain but it has been quite quiet for a long time and it is back on the rise.”

Mr Netanyahu correctly answered: “Well, you know, I wouldn’t blame Jews for antisemitism any more than I would blame blacks for racial hatred stirred against them, or anti-gay hatred. It’s because of what they are.” Mr Netanyahu appeared to have more to say, but Mr Marr interjected: “There’s a distinction between Jews and policies.” Mr Marr was correct to draw such a distinction, which makes his suggestion that many Jews think that rising antisemitism in Britain has been fuelled by the political positions adopted by the Israeli government so extremely clumsy.

It is disappointing and concerning that an experienced broadcaster like Mr Marr, who was the editor of The Independent and then the BBC’s political editor, should see fit to conflate criticism of Israeli policies, which is not antisemitic, with rising antisemitic crime.

Marr appeared to warm up as Netanyahu mentioned the close intelligence and security ties between Israel and Britain.

Melanie Phillips points out, however, that Netanyahu delivered a master class in how to present Israel’s case:

. Watch how he calmly copes with the usual boiler-plate prejudices about the Palestinians and then makes the points that so badly need to be made to a British audience – such as pointing out that Israel has helped save many British lives. Not a fact that the British often hear.

Watch the video and judge for yourselves:

We can all learn from Binyamin Netanyahu’s cool demeanour and immediate grasp of the facts as well as his ability to eloquently present Israel’s case. We can also learn from the example of the Zionist Federation and the Sussex Friends of Israel who organized the counter-march against the PSC and their cohorts, making an anti-Israel demo look like a pro-Israel rally.  Kol hakavod to all of them who participated, many of whom take part in counter-demonstrations every week around Britain.

2 Responses to Combatting antisemitism on the streets of London