The UN – here we go again

It was action replay time at the UN General Assembly last week, as the UN lived down to our expectations and voted to condemn Israel 9 times:

By contrast, in this year’s session there will be a total of 6 condemnatory resolutions for the rest of the world combined — with one each on Syria, North Korea, Iran, Crimea, Myanmar, as well as one on the U.S. for its Cuba embargo.

All 193 UN member states participate in the initial committee vote today, and then almost always vote the same way in a second and final vote at the GA plenary in December.

“The U.N.’s assault on Israel today with a torrent of one-sided resolutions is surreal,” said Neuer.

“Even after Syrian president Bashar Assad has used chemical weapons against his own people within the past year, the U.N. is about to adopt a resolution — drafted and co-sponsored by Syria — which falsely condemns Israel for ‘repressive measures’ against Syrian citizens on the Golan Heights. It’s obscene,” said Neuer.

“While there will be a total of 20 resolutions against Israel this session, not a single U.N. General Assembly resolution is planned today or this year for gross human rights abusers such as Saudi Arabia, Turkey, Venezuela, China, Cuba, Pakistan or Zimbabwe.”

“At a time when Palestinian President Mahmoud Abbas and his state-controlled media incite to the continued stabbing and shooting of Israeli Jews, the U.N.’s response is to reflexively condemn Israel in nine separate resolutions, each of them one-sided, each of them utterly silent on Palestinian abuses.”

The resolution drafted annually by Syria condemns Israel for holding on to the Golan Heights, and demands Israel hand the land and its people to Syria. 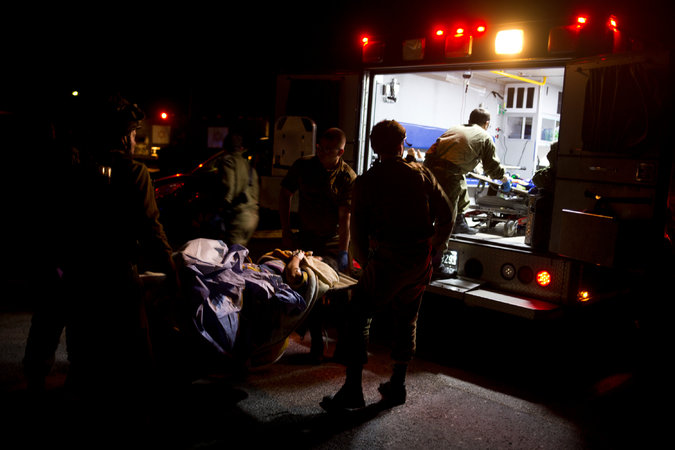 “It’s astonishing,” said Neuer. “After the Syrian regime has killed its own people by the hundreds of thousands over six years, how can the U.N. call for more people to be subject to Assad’s rule? The timing of today’s text is morally galling, and logically absurd.”

“Today’s resolutions claim to care about Palestinians, yet the U.N. is oblivious to the dozens of Palestinians who have been slaughtered, maimed and expelled by Assad’s forces, and more than 3,000 victims killed since 2011.”

“Today’s farce at the General Assembly underscores a simple fact: the U.N.’s automatic majority has no interest in truly helping Palestinians, nor in protecting anyone’s human rights; the goal of these ritual, one-sided condemnations remains the scapegoating of Israel,” said Neuer.

“The U.N.’s disproportionate assault against the Jewish state undermines the institutional credibility of what is supposed to be an impartial international body. Politicization and selectivity harm its founding mission, eroding the U.N. Charter promise of equal treatment to all nations large and small,” Neuer added.

As a further example of the UN’s extreme insanity, there is a possibility that Iran will chair the next UNESCO Executive Board!

A diplomatic battle is under way to prevent Iran’s election to the post of UNESCO Executive Board chairman to replace Michael Worbs of Germany.

The words of Jeremiah in Eicha (Lamentations) illustrated perfectly at UNESCO

Israel has had a contentious relationship with the 58-member board, which in the past has approved resolutions that some say have ignored Jewish ties to Judaim’s holiest site, the Temple Mount.

US and Israeli efforts to block Iran received a boost on Wednesday when the Philippines was one of 27 countries the United Nations Educational, Scientific and Cultural Organization’s General Assembly elected to a four-year term on the board, effective immediately. Some of those countries are serving their second four-year terms.

In advance of the November 16 election, the board has been split between choosing Iran or South Korea to head the board, but it is possible that the Asia Pacific group will push the Philippines ambassador as a compromise candidate, a diplomatic source speculated in a conversation with The Jerusalem Post.

But the overall make-up of the board with the new members is seen as more hostile to Israel than the previous one.

Germany and the Netherlands lost seats and Turkey gained one. Jordan joined Egypt on the board, thereby providing additional support to any anti-Israel resolutions regarding Jerusalem in the future.

Whether Iran is elected or not, the result is almost irrelevant given the inherent hostility to Israel built in to the organization. The more important issue is the fact that a terror-supporting and revolution-exporting country, which is destabilising the Middle East and holding the world hostage to its desire to build nuclear weapons, could even be considered for such a symbolic post. In fact Iran should not be allowed to be a member of the UN at all.

Then again if the UN expelled every terror-supporting member state, there would be almost no UN left at all. Quite a comforting thought, all in all.

Israel’s Ambassador to UNESCO, Carmel Shama Hacohen, slammed the organization  as “the Titanic of international organizations”:

UNESCO is “the Titanic of international organizations,” Israel’s ambassador to the United Nations Educational, Scientific and Cultural Organization said, accusing it of deliberately falsifying history to persecute the Jewish people. 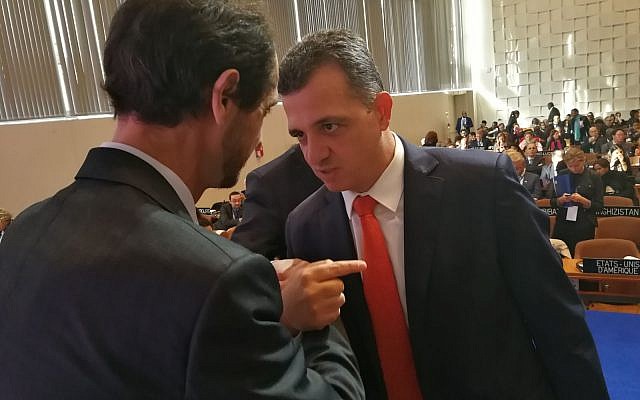 Carmel Shama Hacohen argues with a Palestinian diplomat at UNESCO

In a scathing speech Friday to UNESCO’s 39th General Conference in Paris, Carmel Shama-Hacohen also slammed the United Arab Emirates for having given a gift to all member states but Israel, urging delegates to give it back in protest.

“UNESCO is the Titanic of international organizations, which was hijacked and led by the Arab Group into crashing the iceberg of politicization, and which has been sinking ever since,” Shama-Hacohen said.

He added: “Sadly, UNESCO has been hijacked and abused as a tool for the persecution of Israel and the Jewish people, while concocting fake facts and fake history, meant to erase our history in Jerusalem and rewrite global history.”

Shama-Hacohen dedicated a significant part of his speech to the UAE’s October 30 snub of Israel, though he did not name the Gulf state by name.

At the opening of the General Conference in Paris, the Emirati delegation had placed a box containing a silver medal on the desk of each foreign delegation in honor of the UAE having sponsored the renovation of the conference hall. No box, however, was placed on Shama-Hacohen’s desk.

“Even the inauguration of this very hall was contaminated with the poison of politicization, as the donor state handed out to all member missions a greeting letter and a medal memorabilia: all member missions, aside from one — Israel,” the Israeli envoy said Friday. “How petty, how primitive, how pathetic.”

The incident made clear once again “that petro-dollars can buy much, but there’s no price tag on wisdom, manners and etiquette. Your wealth might be in money, but in dignity you are poorer than poor,” he added.

“These wrongs are done in full daylight, and all keep quiet: silent accomplices to discrimination in sports: one of the foundations of education and culture, and silent accomplices to the attempts to isolate and ostracize Israel in the inauguration of this hall,” Shama-Hacohen said Friday.

“As for the silver medal, which was handed to you as a gift, I’d return it if I were you, so as not to partake in a despicable act which has no place in a free and enlightened world.”

Kol hakavod to those diplomats who took Hacohen at his word and handed him their medals:

Many foreign diplomats stationed at UNESCO gave him their medals — which bore a portrait of Hamdan bin Rashid Al Maktoum, the deputy ruler of Dubai and the country’s finance minister of the UAE — in protest of the UAE’s move, the Israeli envoy said.

“My initial instinct was to put it to good use as a doorstop,” he said. “However, after giving it some more thought, I decided to donate them to the Syrian refugees who are wandering the cold streets of Paris. These refugees include infants and children, who escaped the atrocities of the Syrian regime and the chemical attacks of that member of the Arab Group against its own women, children and innocent civilians.”

He added: “If you only invested in them 1% of the efforts you put in here against Israel, their lives would have been better.”

Watch his speech below. If only his English was better pronunciated he would make a much bigger impact. Nevertheless, kol hakavod on an excellent speech:

As a palate cleanser listen to UN Ambassador the UN Nikki Haley’s fantastic speech to the Israel-American Council as she blasted the previous Obama administration for its betrayal of Israel at the UN, and pledged staunch American support for Israel:

Nikki Haley is a shining example of what a diplomat should look like. Sadly she is a rare diamond in a pig sty.

7 Responses to The UN – here we go again