I shall start this week’s Good News Friday with some news from last week.  Last Shabbat we read the Torah portion of Chayeh Sarah, “the life of Sarah”, in which Sarah our Foremother passed away. In Genesis 23:16, we read of Abaraham’s purchase of the Cave of Machpela from Ephron Ben Tzohar the Hittite for 400 pieces of silver. Ephron had initially offered the cave for free but Abraham insisted on paying the full price. According to Jewish commentators, he did this so that no one should ever accuse the Jewish people of stealing the Cave – he would be greatly disappointed should he read the news headlines 4,000-odd years later.

Nowadays, to honour the memory of Sarah, every year on Shabbat Chayeh Sarah, thousands of Jews descend upon Hebron to spend Shabbat there and to pray in the Cave of Machpela. Last Shabbat, on the day that this portion was read, no fewer than 35,000 Jews (!!) spent a very happy Shabbat in Hebron:

35,000 Jews spent Shabbat (Sabbath) in Hevron, commemorating the Torah reading this Sabbath which relates how the Patriarch Avraham bought Me’arat Hamachpela (the Cave of the Patriarchs) from Ephron the Hittite for 400 coins.

The streets of Kiryat Arba and Hevron filled with tents and portable caravans, and over 3,000 Jews enjoyed Shabbat meals at a tent erected for the purpose by Chabad.

A tent city at Me’arat Hamachpela for Shabbat Hebron with 35,000 in attendance

Committee of the Jewish Community of Hevron Director Uri Karzan said the number of participants was at an “all-time high.”

“This is a special day for Hevron and Jews around the world,” he said. “In the near future, G-d willing, we will host people in the new buildings which are being planned for the Hezekiyah Quarter.”

In even better news, new construction was announced for the Jewish quarter of Hevron:

In recent days, the Jewish Community of Hevron began “Operation Machpela,” to advance the rebuilding of Hevron’s Jewish neighborhoods.

The plans include thirty new apartments near the Shavei Hevron Yeshiva. These apartments will be built on land which was bought by Chabad approximately 100 years ago, for the purpose of rebuilding Jewish Hevron.

This is truly fantastic news! This surely would make Abraham happy! Kol hakavod to everyone who organized and participated in this wonderful Shabbat. May we continue to enjoy peaceful Shabbatot in our historic cities and sites.

Since we are talking about ancient times, a fascinating discovery was made in the City of David in Jerusalem, in, of all things, a refuse pit!

Fossilized remnants from a 1,100-year-old refuse pit recently discovered near Jerusalem’s Old City provide a veritable smorgasbord of culinary delights. According to well-preserved seeds, bones and other refuse, ancient city dwellers feasted on beef, fish and fowl, with sides of veggies and lentils. And for dessert? How about cake, or a fruit salad of figs, grapes and black mulberries. 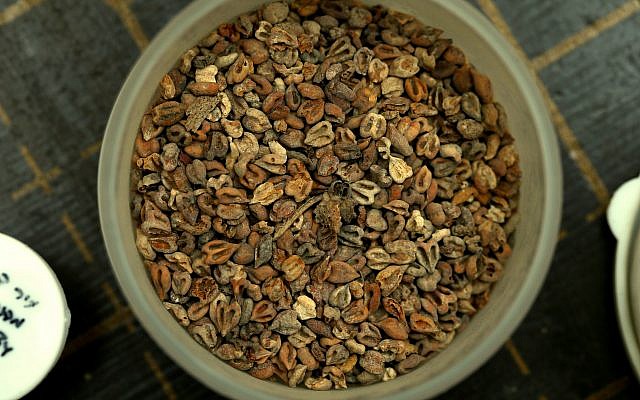 Fossilised grape seeds found during excavations of the City of David

“Just like we bake a cake and throw the egg shells into the garbage, that’s exactly the form in which we found the eggs. We have scales and jaws of fish and small rodents,” said archaeologist Oriya Amichay in a press release. (The rodents were presumably not served.)

The refuse pit was uncovered in an IAA excavation, in collaboration with the Israel Nature and Parks Authority and funded by the City of David Foundation, on the terraced Second Temple Period Pilgrimage Road in the City of David.

Uniquely, the organic remains were discovered in a fossil-like state: Their organic elements became mineral, preserving their shape and color, in a little-known process which the archaeologists are currently “intensely studying.” 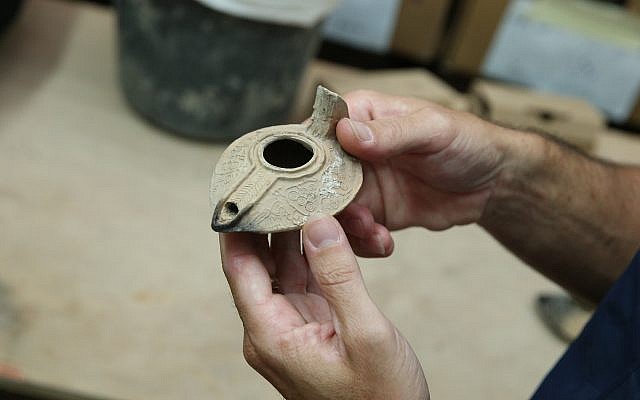 An intact oil lamp from the Abbasid period decorated with grape clusters and birds found in Jerusalem’s City of David excavation, November 2017. (Eliyahu Yannai, courtesy of the City of David)

“The grape seeds look as if they just came out of the grape,” said IAA excavation director Nahshon Szanton in conversation with The Times of Israel on Thursday. While it is too early to know if the researchers will discover any DNA remnants, he said, it would be a great boon to science if they do.

The most surprising remnant of organic material are well-preserved eggplant seeds, the oldest known domestic evidence of the fruit in Israel. Szanton was not aware of a tradition of Jews eating eggplant, nor is there evidence in any literature he is familiar with. (Interestingly, the word for eggplant in Hebrew, hatzil, was adapted from Arabic in the rebirth of Modern Hebrew and has only been in use for the past 100 years.)

Szanton told The Times of Israel that while it is understood that all three monotheistic religions lived in Jerusalem during this time period, “we still don’t know exactly who ate what.” He said that it is possible that after further examination of the animal bones, including cattle, fowl and fish, that will become more clear.

What a truly fascinating find, and when the items are properly analyzed they will shed even more light on the fascinating history of Jerusalem. Kol hakavod to the archeologists and researchers of the IAA who are working on this great project.

And now a leap forward back to the present day, where Daniel Peters, a student at a pre-military academy, produced this beautiful film of Israel, recorded from the bird’s-eye view of a drone:

Enjoy the beauty of our country, and with this I wish you all Shabbat Shalom and Chodesh Tov!