Chanukah has just begun here in Israel, and we have our Menorahs – or Chanukiyot as they are called in Israel – lit up at the window.

It is one of my favourite chagim, since it requires very little preparation but lots of eating! 🙂  This week we’re looking forward to several get-togethers with our children and grandchildren, as well as our niece’s son’s barmitzvah.

Unfortunately my father-in-law is hospitalized after a heart attack so we’re not in full festive mode. Nevertheless my husband will be heading over to the hospital to light candles for his father there (and let’s hope he doesn’t burn the hospital down or set off the sprinkler system!). 😀  Thank G-d my father-in-law seems to be on the road to recovery and we hope he will be home in the next day or two. Meanwhile I am heading out to Kedumim to a Yoram Gaon concert. Yay!! ♥♥♥

When we recap the last week’s events, with Donald Trump’s declaration of the recognition of Jerusalem as Israel’s capital, and we hold it up against the backdrop of Chanukah, we can see what a miraculous event it was, and what perfect timing it was. 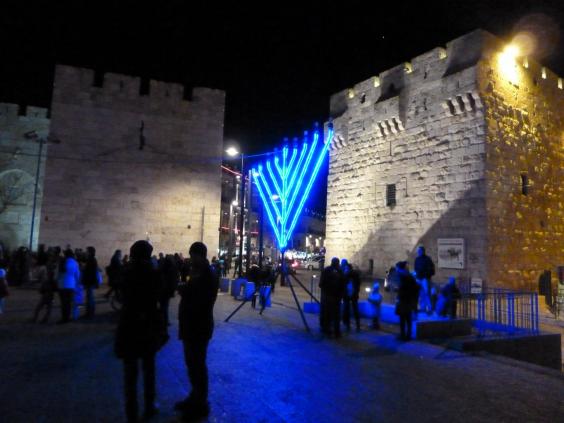 But beyond the simple military victory there occurred an amazing miracle of a spiritual nature – the miracle of the single cruse of pure oil that was found, which enabled the rededication of the Temple to take place. The oil was only enough to burn for one day, while 8 days were needed to prepare a new batch of pure olive oil for the Menorah. The miracles continued when that little cruse of oil sufficed for the full 8 days. Thus we celebrate Chanukah for 8 days, lighting candles each night of the festival.

For more background and history of Chanukah/Hannukah/Channukah (which can be spelled with any combination of n’s, k’s, h’s and optional c’s🙂 ) read Aish.com. In my previous years’ posts I wrote:

There are several customs associated with Channukah, chief amongst them eating foods made with or fried in oil (to commemorate the miracle of the jar of oil), especially latkes (potato pancakes) and sufganiyot (jam-filled doughnuts – or jelly donuts for the Americans amongst us) and playing with the dreidel, a little spinning top. According to tradition, under Greek rule it was forbidden to study Torah, so students would gather in secret. If they were discovered by the Greeks they would pull out dreidels and pretend to be gambling or playing games.

As has become my custom, here is a cute Chanukah-related videos: The Maccabeats singing Candles on the Sill ( parody of “Castle on the Hill” originally performed by Ed Sheeran):

Amazingly the usually anti-Israel Independent has two nice articles about Chanukah: Everything you need to know about Chanukah food, and Eight cities to visit during Chanukah.

Happy Chanukah everyone! Enjoy the festival and the lights.