The never-ending fight against delegitimization

Even before Donald Trump’s Jerusalem declaration there was no shortage of anti-Israel agitation going on, as readers of this blog know well. But times are changing, and so are the attitudes of those confronting this bigotry, in particular the Israeli government which has finally woken up to the threat of BDS and delegitimization and is starting to act in a coordinated manner to combat it – with some success.

Just a few items from the last few weeks:

Israeli authorities announced on Thursday [30th Nov.] that Swiss diplomats will not be allowed to access the Gaza Strip because of their ongoing contacts with the EU and US-classified terrorist group Hamas.

Switzerland, a non-EU country, does not recognize Hamas or Hezbollah as terrorist organizations. Foreign Ministry spokesman Emmanuel Nahshon told The Jerusalem Post on Saturday that Israel declines to comment on the ban.

A photograph of Hamas leader Yayha Sinwar and Swiss diplomat and representative for the Palestinian Authority, Julien Thöni, at a joint Tuesday meeting sparked irritation from Defense Minister Avigdor Liberman, according to a report in the Swiss daily Basler Zeitung.

How “neutral” can you get? Switzerland, which benefits from a “halo” image of a human-rights benefactor, does not recognize one of the pre-eminent terror organizations in the world as a terror organization? This is mind-boggling. I am pleasantly surprised that Israel has found the backbone to stand up to this Swiss hypocrisy, not to say idiocy.

Due to more European double-think, Israel pulled out of a German exhibit of the Dead Sea Scrolls:

Despite the German’s decrying the latest manifestations of antisemitism in their country this week, following the anti-Trump protests, the government itself cannot find it within itself to acknowledge Israel’s own Jewish history, encapsulated by the Dead Sea Scrolls:

Israel has pulled out of a planned exhibit of the Dead Sea Scrolls in Frankfurt because the German government would not guarantee their return if claimed by Palestinians or Jordanians.

No country on earth would allow its precious artefacts to be exhibited in another country if that country would not guarantee their return. What gives the Palestinians the right to claim the Dead Sea Scrolls as their own? They contain pieces of parchment describing Jewish history, Jewish laws, and Jewish customs of Jewish sects who were hiding in caves in the desert during the Roman occupation. They have no connection whatsoever to the Arabs, whether in the form of Jordan or the Palestinians – who only came into being in 1964! 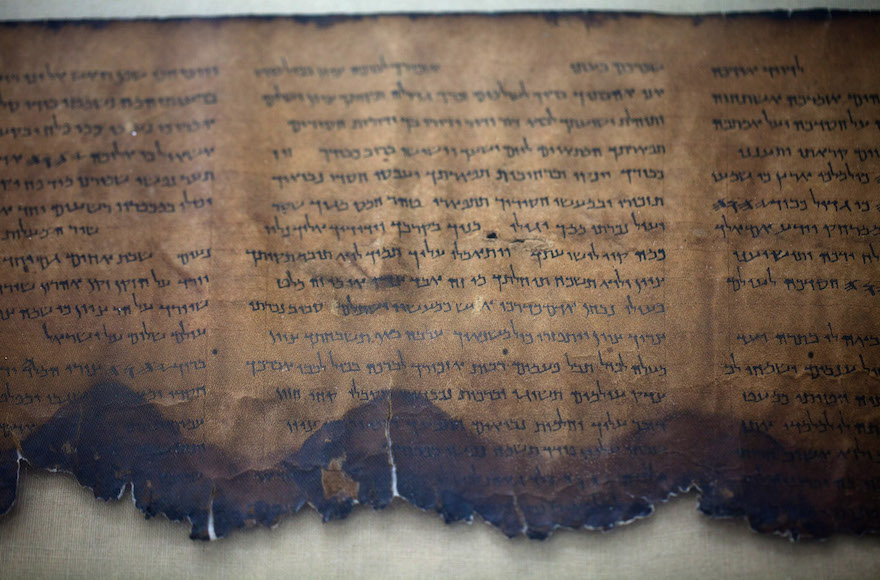 The chutzpah of the Arabs to attempt to claim these scrolls as their own is paralleled only by the Germans’ bending over backwards to accommodate these potential claims.

The Frankfurt Bible Museum announced that it has canceled the exhibit which was scheduled for a September 2019 opening. Its director, Jürgen Schefzyk, said he regretted the German government’s decision, adding that neither Holland nor Austria would have hesitated to issue general immunity guarantees.

According to German news reports, the government guarantee would have blocked Palestinian or Jordanian authorities from contesting the provenance of the scrolls, which are among the oldest known texts related to the Hebrew Bible.

“Because of the unwillingness of both ministries to give the necessary declaration, as Qumran lies in today’s West Bank, the Israel Antiques Authority is not letting the material out of the country and the Bible Museum had to cancel its plans,” Uwe Becker, the deputy mayor of Frankfurt, told The Jerusalem Post.

Becker expressed outrage at Germany’s foreign and culture ministers on Thursday, sending letters to Culture and Media Minister Monika Grütters and Foreign Minister Sigmar Gabriel asking them to change their position to support the exhibition.

“If Germany is unwilling to clearly express the legal status of the fragments of Qumran as Israeli world-cultural-heritage goods, it would dramatically change the coordinates in our German-Israeli relations. And it would mean the construction of a wall toward the places of the birth of Christianity in the holy country, because it would be the same for Bethlehem, Jericho, east Jerusalem and many other places of Jesus’s work,” Becker said.

Kol hakavod to Mr. Becker. He should be leading the German government, not their painfully PC leadership. Interestingly:

Becker, widely considered one of Israel’s strongest supporters in the federal republic, led a legislative effort to ban BDS activity in Frankfurt.

Becker said that the German government’s decision to not guarantee a return of the scrolls also damages Germany’s relations to Christianity in the Middle East. He noted that in consideration of “Palestinian sensitivities, the special relationship to Israel weighs more significantly.”

Here too I am delighted that the Israeli government had the courage of its convictions and refused to play along just to “make nice” with a foreign government, however friendly it might be.

And here is another piece of excellent news: The Palestinian terrorist Leila Khaled was prevented from entering Italy –  this shortly after she addressed the European Assembly in Brussels:

ROME —Leila Khaled, a member of the US and EU-designated terrorist Palestinian group Popular Front for the Liberation of Palestine (PFLP), who is conducting  speaking tours across Europe to promote the anti-Israel Boycott, Divestment, Sanctions (BDS) campaign, was prevented from entering Italy.  She was denied entry at Fiumicino airport near Rome.

The move came a week after the European Parliament decided to ban members of terrorist organizations from addressing the body. The decision came after Khaled spoke at an event in September in the European Assembly in Brussels, using the stage to incite to violence against Jews  and comparing Israelis to the Nazis.  She glorified terrorism and trivialized the Holocaust.  “Don’t you see a similarity between Nazi actions and Zionist actions in Gaza?,” she declared. “While the Nazis were tried in Nuremberg, no one has ever tried the Zionists,” she said.

Just a reminder of who Leila Khaled is:

Leila Khaled was a key member of a terrorist cell that hijacked TWA Flight 840 in 1969. A year later, she participated in the attempted hijacking of EL AL Flight 219. She lives in Jordan.

‘’We have long warned European governments that they have been funding radical, politicized NGOs, including those linked to the PFLP terror group and which were involved with Khaled’s event,’’ she said.

However, these successes notwithstanding, we still have a long way to go and there is no end in sight. The pro-Israel educational and activist NGO Stand With Us produced a video showing the highlights – or rather the lowlights – of the last week’s demonstrations around the world where pro-Palestinian, i.e. anti-Israel, protests descended rapidly into outright antisemitism, calling for Israel and the Jews’ destruction (as I mentioned in my post on the subject last week).

Let us keep up the good fight. Remember the lesson of Hannukah – the few against the many, the righteous against the evil, the weak against the strong. With G-d’s help we beat the enemy then and we shall beat them again today.

6 Responses to The never-ending fight against delegitimization