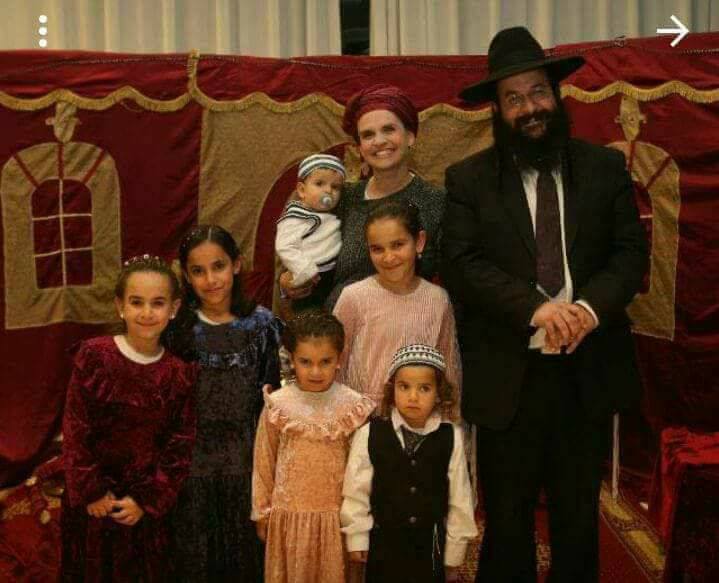 Last night Palestinian terrorists opened fire on the car of Rabbie Raziel Shevach Hy’d, a resident of Havat Gilad in Samaria. Rabbi Shevach was a volunteer in Magen David Adom though he was off duty at the time. He managed to call for help before finally succumbing to his wounds in hospital.

Rabbi Raziel Shevach, a 35-year-old father of six, has died of his wounds following a shooting attack near Havat Gilad in Samaria this evening.

Rabbi Shevach was a mohel and volunteered with Magen David Adom. About a year ago, he finished studies for the rabbinate, and was currently in the midst of studies to be a rabbinical arbiter.

The rabbi leaves behind a wife, 4 daughters and 2 sons, the younger of which is an 8-month-old baby. Details for the funeral have not yet been set.

Medics who rushed to the scene provided aid to the rabbi and evacuated him to Meir Hospital in Kfar Saba, where doctors fought to save his life, but were ultimately forced to confirm his death.

The hospital said that “The wounded man arrived to the hospital without pulse, not breathing, and without vital signs. He was brought to the trauma room, where advanced resuscitation efforts were employed. Unfortunately, despite the efforts, his death was confirmed.”

The terrorists fled the scene and have not yet been apprehended.

Samaria Council head Yossi Dagan responded to the tragic incident, saying, “It’s inconceivable that terrorists feel free to shoot at innocent civilians. Nevertheless, I want to send a clear message to our enemies: We will not give in to terror. We have chosen the path of life.”

Rabbi Raziel Shevach, slain in a West Bank terror attack Tuesday night, was remembered by friends and acquaintances as a goodhearted family man who was a central figure in the local settlement community and in his home of Havat Gilad.

“He was a very special person,” said friend Yehuda Hass, who volunteered with Shevach as a medic in Magen David Adom. “Just recently he received a citation for his work in the organization. He was the unofficial rabbi of Havat Gilad.”

The 35-year-old father of six was also a rabbi in a yeshiva and a mohel.

“He was a very well known mohel here…in the area, entirely as a volunteer,” Hass told the Ynet news site. “He was a great man with a great heart.”

Ashkenazi Chief Rabbi David Lau also released a statement in which he said he was heartbroken by Shevach’s death. He described him as a “unique, affable and rare character” who “devoted his life to saving lives, teaching Torah and safeguarding Judaism in the Land of Israel.”

The head of the local settler council, Yossi Dagan said “residents of Samaria and all of Israel grieve this terrible loss and embrace the family and the orphaned children.”

Dagan called Shevach a central figure in the region, “a man of grace, a man of Torah and a friend. All who knew him loved him, and loved him deeply.”

Defence Minister Avigdor Liberman said the government will look into legalizing the Havat Gilad outpost in revenge for the murder of Rabbi Shevach. My opinion is that the outpost should be legalized in any event, unconnected to any terror acts – but better this way than not at all. I’ll believe it when I see it.

A much easier and more efficient way to prevent terrorism is to cut off their funding at source. The Defence Ministry reports that in 2017 the Palestinian Authority paid terrorists the mind-boggling sum of 1.23 billion shekels:

The Defense Ministry released the figures as part of the government’s work on the so-called “terrorist wages bill,” which passed its preliminary Knesset reading in June 2017.

According to the latest figures, each terrorist serving a three- to five-year sentence in an Israeli prison receives a monthly stipend equivalent to NIS 2,000 ($580).

To compare, the average monthly salary of Palestinians in the West Bank amounts to about $580.

The legislative proposal, spearheaded by the Defense and Justice ministries, seeks to hinder the PA’s terrorist stipend mechanism.

It stipulates that at the end of every year, the defense minister will present the Ministerial Committee on National Security with a report detailing the direct and indirect payments the Palestinian Authority has made to terrorists and their families. The figure will then be deducted from PA tax funds collected by Israel.

Ynet provides us the figures in a handy table (Via Judy F):

Until the likes of the EU and UNRWA stop funding the terrorists, not to mention start demanding their accountability for the funds received, plus demand that they cease incitement of their children through the educational system, Palestinian terrorism will never end.