Poland rewrites its history of the Shoah 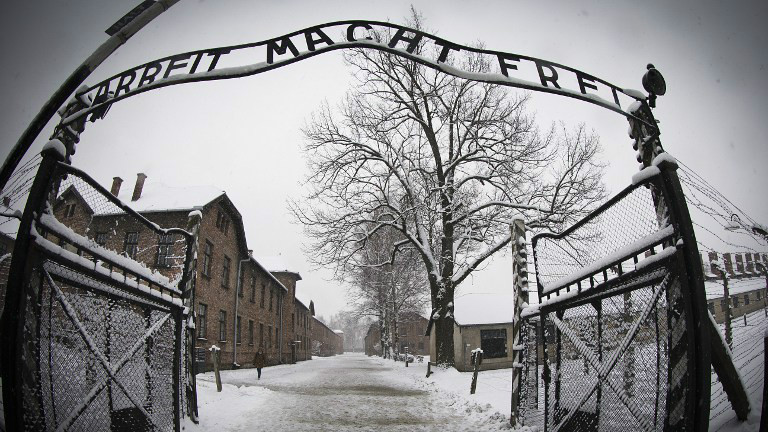 The new Polish legislation to criminalize anyone who claims that Poland played a part in the Shoah has outraged all Jews from across the world, as well as angering genuine historians.  The fear is that Poland is attempting to whitewash its citizens’ role in the Shoah as Amanda Borschel-Dan writes in the Times of Israel:

This week Polish Prime Minister Beata Szydlo’s Cabinet approved a bill which would criminalize the use of the phrase “Polish death camps” in reference to Nazi-run extermination camps in occupied Poland. Use of the banned expression could lead to a three-year jail term if considered intentional, or a hefty fine.

“It wasn’t our mothers, nor our fathers, who are responsible for the crimes of the Holocaust, which were committed by German and Nazi criminals on occupied Polish territory,” said Justice Minister Zbignew Ziobro on Tuesday. “Our responsibility is to defend the truth and dignity of the Polish state and the Polish nation, as well as our fathers, our mothers and our grandparents.”

The legislation was originally proposed by Szydlo’s ruling Law and Justice Party (PiS) in 2013, when it was rejected. Upon rising to power in 2015, however, PiS vowed to “recalibrate many of the ways in which Poles think, talk and learn about their own history,” according to German news agency Deutsche Welle, and to instill national pride.

Astonishingly, one Polish Jewish community leader thinks this is a good idea!

Representing Poland’s 10,000-strong active Jewish community, Klimek said TSKZ’s president Artur Hoffman has also spoken in support of the bill — at the Israeli Knesset and as a consulting member of the Polish government’s commission of minorities.

In conversation with The Times of Israel, Klimek stressed the need for historical accuracy when speaking of the Holocaust, which was, she said, an atrocity committed by the German Nazi regime on occupied land. Unlike the case in other European countries, the Polish nation never collaborated with the Nazi regime, said Klimek. There were bad Poles, as well as good Poles, during World War II.

But it is not as simple as that, as the article continues:

But after a summer of PiS politicians playing fast and loose with history, one could wonder whether this new “Polish death camps” law is a manifestation of nationalistic Poles’ historical whitewashing.

The legislation comes a month after high-profile historical “mistakes” were made by PiS politicians surrounding well-documented massacres perpetrated by Poles.

Most prominent among them, in a mid-July interview on Polish public broadcaster TVN, Education Minister Anna Zalewska insinuated that the Jedwabne massacre of 1941, when Poles burned alive more than 300 Jews in a barn, was a matter of “opinion.” 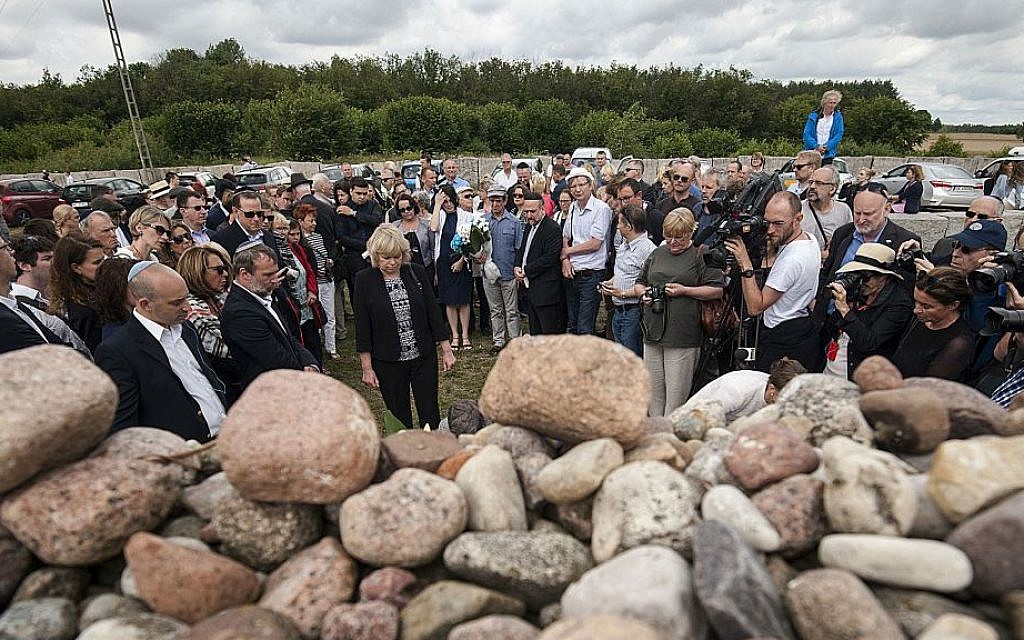 Jews from Poland and abroad gather for commemorations marking the 75th anniversary of a massacre of Jews in Jedwabne, Poland, on July 10, 2016. (AP Photo/Michal Kosc)

Zalewska is hardly alone. As reported by Polish Newsweek, a Polish public opinion survey following Zalewska’s statements found that 33% of the population agreed with the minister that the Polish massacre of Jews at Jedwabne is an opinion, 29% were undecided and only 38% agreed with the statement that “Poles burned Jews in a barn in Jedwabne.” The highest percentage of disbelief was found among youth.

Additionally, newly elected president of the Polish state’s Institute of National Remembrance Jaroslaw Szarek, according to a JTA report, recently told a parliamentary committee that “the perpetrators of this crime were the Germans, who used in their own machine of terror a group of Poles.”

Concurrently, to the condemnation of Klimek and other Jewish officials, the Polish government issued yet another in a series of rejections to Jewish community petitions to open the door to restitution claims from Holocaust survivors.

Israel’s national Holocaust memorial and museum Yad Vashem told The Times of Israel on Wednesday that, as it has since 2006, it endorses the suggested replacement terminology — “the former German Nazi Concentration and Extermination Camp.” The Israeli institution has recognized over 6,000 Poles as “Righteous Among the Nations” for rescuing Jews; some 3 million Polish Jews died in the Holocaust.

But what instigated this legislation in the first place?

In the aftermath of the Polish Cabinet approval of the new bill, Tel Aviv University History Professor Havi Dreifuss wondered at the motivation behind the legislation.

“Although there is no argument that those camps were established by the Germans, as a historian it is always worrying and disturbing to see the use of law to impose something on common knowledge,” said Dreifuss, the head of the Center for Research on the Holocaust in Poland at Yad Vashem.

Funeral of the Jews killed in the Kielce pogrom of 1946 (l) and plaque in their memory, inaugurated by Lech Walesa, in 1990.

At the same time, said Dreifuss, historians, including Polish scholars, have unearthed concrete proof of two major massacres against Jews, 1941’s Jedwabne, and the 1946 Kielce massacre, in which 42 people died. She added that contemporary research shows there were other such massacres of Jews like Jedwabne at the hands of Poles in the region of Lomza. More study is necessary to completely uncover the facts behind these atrocities.

And despite the best efforts of the Polish government, awkward facts refuse to go away, facts like the complicity of Polish citizens in the killings of Jews:

Historian Jan Tomasz Gross’s 2001 book “Neighbors” caused shockwaves in Poland and beyond with its descriptions of the “ordinary” Poles who perpetrated the 1941 Jedwabne massacre. Gross, who was awarded the Knight’s Cross of the Order of Merit in 1996, has been an object of vilification under the PiS government. In February 2016, Polish President Andrzej Duda went so far as to request a re-evaluation of Gross’s worthiness for the medal due to the scholar’s attempts to “destroy Poland’s good name,” said Duda.

Poland’s “good name” which President Duda is so concerned about, is going to be hard to rehabilitate given the eager participation of many of its citizens in massacring their Jewish neighbours. Alexander Boot, a (non-Jewish) Russian emigré living in England, writes on his blog that “It wasn’t just the Germans“:

But the job wasn’t done yet. Einsatzengruppen and the local collaborators began to round up and shoot Jews. Most of the firing squads didn’t include a single German – there was no shortage of local volunteers. By the end of the war, only a couple of hundred Lwów Jews were still alive.

Thus three times the number of Jews were killed in that one city than in the whole of occupied France, where local enthusiasm wasn’t exactly in short supply either. Why such disparity? What made Lwów so much more efficient?

Actually, it wasn’t just Lwów. Simply compare the numbers of massacred Jews relative to their overall numbers in a small sample of European countries.

You’ll notice that a much higher percentage of Jews were killed in Eastern Europe than even in Germany, which after all initiated the Holocaust and built the death camps.

Why such disparity? I can think of only one answer: Eastern Europeans didn’t mind the Holocaust as much, and were more than willing to lend the Germans a helping hand.

Another question: why did the Nazis set up all the extermination (as opposed to concentration) camps in Poland? Auschwitz, Belzec, Chełmno, Jasenovac, Majdanek, Maly Trostenets, Sobibor and Treblinka were all there.

To some extent, it must have been a matter of logistics: most of Europe’s Jewish population lived there or thereabouts, in what used to be the Pale of Settlement.

But it couldn’t have been just logistics. After all, the Nazis didn’t mind using hundreds of trains badly needed for military freight to transport Jews from, say, France all the way to Poland. It would have been more efficient to kill them in situ.

Also in the back of the Nazis’ mind must been the issue of post-war deniability for the Germans. Had those crematorium chimneys been spewing clouds of black smoke in, say, Hamburg, it would have been hard for its denizens to claim they didn’t know.

As it was, such claims weren’t all that credible anyhow, as Daniel Goldhagen demonstrates convincingly in his instructive book Hitler’s Willing Executioners. But he also shows that the Nazis were wary of a potential backlash from the Germans had they had to watch mass murder committed on their own doorstep. No such fears in Poland.

He [Duda] also objects to the death camps being referred to as ‘Polish’. I agree that ‘German camps in Poland’ would be more accurate. But those camps wouldn’t have been in Poland if the locals had detested them.

They didn’t. At best, they shrugged their shoulders with indifferent acquiescence. At worst, tens of thousands of them took an active part in the atrocities. And those who deny these facts are the murderers’ accomplices after the fact.

Melanie Phillips thinks that Poland is unleashing its own inner demons with this legislation:

SOME YEARS AGO, when I visited Poland for the first and only time, I was astonished to be told there something I have since repeatedly heard: that the Jews were murdered in the concentration camps in Poland because they were Poles.

This is of course hideously untrue. Polish Jews were murdered in the camps because they were Jews.

It’s true that, as Yad Vashem testifies, Poland produced the greatest number of non-Jews recognized for saving Jews during the Holocaust. It’s also true that Poles were murdered in great number alongside them.

The reason Poles deny that the Jews were victims of Nazi antisemitism is that this would reveal the Poles were victimizers, too. They murdered their Jewish compatriots because they hated Jews.

Making themselves equal in victimization to the Jews enables them to deny their own complicity in the attempt to liquidate the Jewish people. So they are coming up with preposterous and deeply offensive claims to deny Jewish victimization at Polish hands.

Strikingly, though, Poland is a great ally of Israel – which makes this a diplomatic crisis. So why is a country with such a deeply embedded anti-Jewish culture so keen on the Jewish state?

The answer is almost certainly in large part an attempt to bury Poland’s terrible past, whether out of genuine remorse or expediency – or both.

There’s also a difference between young, urban, cosmopolitan Poles, who have a genuine fascination with Jewish culture, and those in rural areas, many of whom remain rooted in a medieval form of Christianity, which still teaches that Jews murder Christian children for their blood.

There are some prominent Poles who speak frankly about Polish complicity in the Holocaust. “Of course Poles took part,” Wlodzimierz Cimoszewicz, Poland’s prime minister during the mid-1990s, told the newspaper Rzeczpospolita. He urged Poles to talk “openly and honestly” about the “tens of thousands” of “szmalcowniks” – Poles who informed on Jews or extorted their property. “Antisemitism was and remains endemic in our country,” he said.

And if you still don’t think that’s possible, just watch the exchange in the two videos below, between Israeli journalist Ronen Bergman and the Polish Prime Minister a couple of days ago, where the Polish PM now accuses the Jews of complicity in the Holocaust!:

Bergman’s mother survived the Holocaust in Poland. He asks if, under new Polish law, he would be considered a criminal for questioning Polish complicity. pic.twitter.com/ZIDvGWPifi

I’m both speechless & sickened to the gut.

Israeli Prime Minister Binyamin Netanyahu has promised to speak with the Polish PM about this – but will it be enough?

The outrageousness of Morawiecki’s bold assertions and bald lies boggle the mind. Any slightly valid point he may have had regarding the description of the death camps as “Polish” rather than “Nazi” has been lost in his morass of historical revision, bordering on Holocaust denial.

9 Responses to Poland rewrites its history of the Shoah