We mustn’t let the bad news get us down, so there is no time like the present for a Good News Friday post to cheer us up for Shabbat.

Let’s start this post with the Israel love-fest at the AIPAC conference that took place this week. The star of the show was undoubtedly US Ambassador to the UN Nikki Haley. Watch her speech below:

You can read the full transcript here.

Here are some highlights of her speech for which she received 12 standing ovations!

She also confirmed every last gripe her audience and their parents and grandparents had been harboring since the late 1940s: “In the real world, Israel is a strong country with a vibrant economy and a first-class military. On the battlefield, Israel does not get bullied. The Iranians and Syrians can vouch for that,” Haley said. “But the UN is a different story. At the UN and throughout the UN agencies, Israel does get bullied. It gets bullied because the countries that don’t like Israel are used to being able to get away with it. Well, just like when I was that little girl in South Carolina, that just doesn’t sit well with me.”

“As many of you know, one of the UN agencies with the worst track record of Israel bias is UNESCO,” the ambassador brought up a favorite topic. “Among many other ridiculous things, UNESCO has the outrageous distinction of attempting to change ancient history. UNESCO recently declared one of Judaism’s holiest sites, the Tomb of the Patriarchs, as a Palestinian heritage site in need of protection from Israel.”

“That was enough,” Haley said. “Ten months into this administration, the United States withdrew from UNESCO.”

“You know, our embassy decision caused a little bit of a stir at the United Nations,” she moved to the other crowd-pleaser. “In the Security Council, almost exactly one year after the United States shamefully abstained when the Council attacked Israel with Resolution 2334, I had the great honor of casting my first American veto. When I was governor, I used my veto power dozens of times. At the UN, I never got to do it until the Jerusalem vote. I got to say, it felt pretty good.”

“The next week, the Jerusalem issue was brought before the UN General Assembly. We lost that vote, but to many people surprise, 65 countries refused to go against us. In the long history of UN’s mistreatment of Israel, that’s quite a record. And we’re not forgetting that vote. Like I said at that time, on that vote we were ‘taking names.’”

Again, fantastic reaction, and the ambassador moved to the big closer: “Last week I took a trip to Guatemala and Honduras and I thanked them both for voting with us. God bless Guatemala. They even joined us in moving their embassy to Jerusalem.”

“In all that we’re doing, whether it’s the embassy decision or UNESCO, or what we’re doing with UNWRA – don’t even get me started on that one – our approach on Israel is tied together by one major idea, the idea that runs through all of it is the simple concept that Israel must be treated like any other normal country,” Haley said, and the audience had enough yiddish naches for two weddings and a bar mitzvah.

Binyamin Netanyahu also addressed the conference of course: you can watch him below:

His words focused on the need to stop Iran:

WASHINGTON – Prime Minister Benjamin Netanyahu was welcomed with a resounding ovation at the AIPAC conference in Washington on Tuesday, where he gave a 30-minute speech on “the good, the bad and the beautiful” in Israel and the region.

Netanyahu steered completely clear of his legal woes piling up at home. His wife, Sara, also received a standing ovation when she was introduced.

Showing no outward signs of the impact of his situation at home, Netanyahu was strikingly upbeat. He strolled away from the podium at one point to get a “closer look” at the 18,000-strong audience and used slides on large screens to talk about Israel’s contributions to the world in the spheres of agriculture, water preservation and security, as well as its growing diplomatic standing.

Against the background of a picture of an airplane on the screens behind him, Netanyahu – referring to Israel’s intelligence capabilities – said: “A plane like that could have been blown out of the sky if it weren’t for Israeli intelligence, a plane heading from Australia to the Persian Gulf. You’re boarding planes when you leave this place, you are safer because of Israeli intelligence. It not only protects Israeli lives, it protects innocent lives around the world.”

He then moved on to Israel’s diplomatic standing. As he pointed to another screen with a map of the world, in which all the countries with which Israel has diplomatic relations were colored in blue, Netanyahu said to a resounding ovation, “You remember people talked about Israel’s isolation? You remember that? Israel’s isolation? Pretty soon, the countries that don’t have relations with us, they’re going to be isolated. There are those who talk about boycotting Israel? We’ll boycott them.”

While the good news coming out of Israel – regarding its technology, military and intelligence expertise – is very good and getting better, the bad news, he said, “is that bad things are getting worse and they’re very bad.”

The overwhelmingly bad thing, he said, was Iran. “We have to deal with this challenge,” he said. “If I have a message for you today, it’s a very simple one: We must stop Iran. We will stop Iran.”

Netanyahu also spent a few minutes talking about the Palestinian Authority’s payment of $350 million per year to terrorists and their families, and asked what message this was sending to Palestinian children.

The “beautiful,” in his “good, bad and beautiful” equation was the Israeli-US relationship.

“What is this beautiful alliance made of? It’s made of our shared values,” he said. “That’s the wellspring of the great alliance between our two countries.”

Since Netanyahu also mentioned Israel’s leadership in so many technological endeavours, it is fitting to bring you here yet another item from the biotech industry. An Israeli breakthrough has  developed a non-invasive prostate cancer test:

Current screening tests for prostate cancer deliver a high rate of false positive results (as low as 25% specificity), leading to unnecessary invasive diagnostic tests such as biopsies. In fact, for the past 10 years many experts have discouraged men without symptoms from undergoing an annual prostate-specific antigen (PSA) test, commonly used for screening in the United States since 1994.

CellDetect previously was proven effective for diagnosing cervical and bladder cancer in multiple clinical studies and it is expected that the technology can be implemented for use in additional cancer detection indications.

Both the cervical and bladder cancer diagnostic products are in initial commercial stages in the United States and Europe, ISRAEL21c was told by biochemist Keren Gueta Milshtein, director of R&D at Micromedic Technologies. For the prostate cancer indication, a blinded study is planned next.

This is really excellent news. Imagine how many lives can be saved through this test, when previously men might have been put off being tested in the old-fashioned way. Kol hakavod to all the researchers and developers of CellDetect.

Moving now to sports, after the diplomatic kerfuffle between Israel and Abu Dhabi – which refused to allow the Israeli flag to fly – Israeli athletes nevertheless won two gold medals at the Abu Dhabi competition:

Israel was the only country represented at the competition whose national anthem was not played and whose flag was not flown in the main competition hall.

Meshi Rosenfeld, who competed in the under 55 kg. (121 lb.) category won the gold in his division by defeating an opponent from Kazakhstan in the finals. 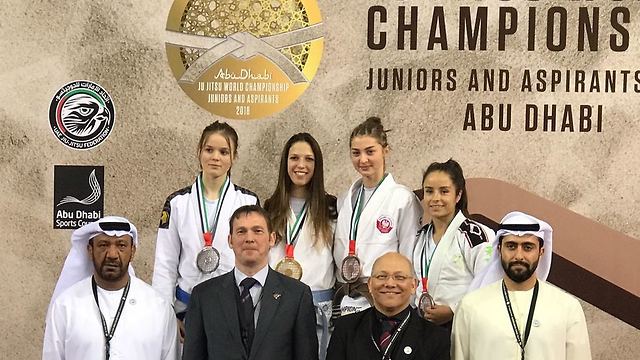 Nimrod Ryeder, who competed in the under 77 kg (170 lb.) category also won the gold after defeating an opponent from Kyrgyzstan in the finals. Ryeder defeated another Israeli participant, Amir Alroy, in the semifinals. Alroy received the bronze medal. 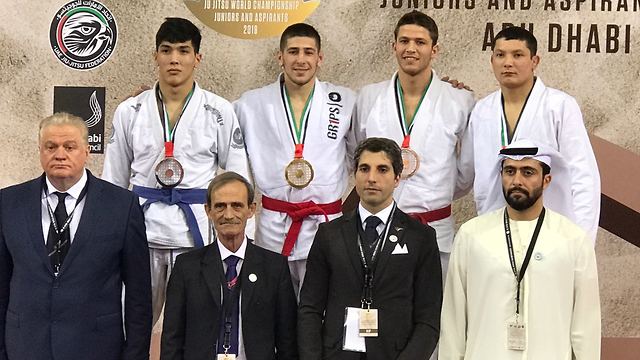 Sara Kovaliov, who is deaf, won over the crowd with her inspirational story and skill. The 16-year-old competitor won the silver medal in the under 48 kg. (106 lb.) category. As the Israeli team reached the airport to return to Israel, the head of the local security service which accompanied the team during the competition handed Kovaliov a gift from a local sheih, a fancy watch, Ynet reported. 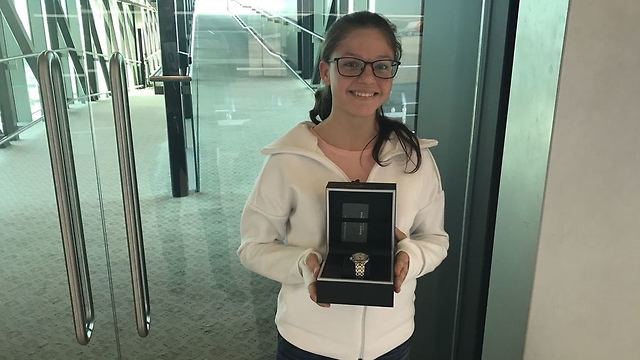 Kovaliov and the watch she received (Photo: Ayelet Federation)

The event organizers stated that the Israeli team could not be identified as Israeli due to “security concerns.”

However, the Israeli team stated that they were warmly received by the organizers of the event.

Erez Alroy, the head of the Israel Jiu-Jitsu Federation, said: “Hosts went out of their way during the competition to provide us with quality hosting—an excellent hotel, transportation everywhere, separate warm-up area and so on.”

It is a blooming cheek of Abu Dhabi to refuse to fly the Israeli flag, and they should be punished by the various world sporting bodies for this unsporting behaviour. It is gratifying though to learn that the team itself was treated well during its stay.

And a huge kol hakavod to Israel’s ju-jitsu team for all their wins. May they go on to ever greater victories.

Last but not least, today the Jerusalem Marathon took place with an astounding, record-breaking 35,000 participants!

More than 35,000 runners, including some 4,000 from 72 different countries, joined the Jerusalem Marathon on Friday morning, the largest-ever number to take part in the annual race. 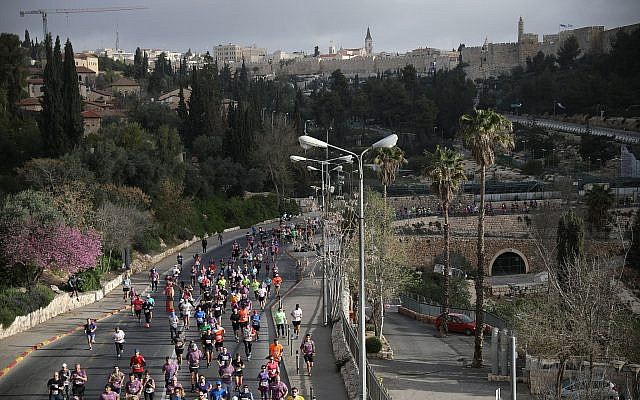 Jerusalem Marathon runners against the skyline of Jerusalem

The guest of honor at the marathon was Olympic medalist and long-distance running world champion Haile Gebrselassie from Ethiopia. Gebrselassie holds two Olympic gold medals in 10,000-meter running and four world titles for that same distance, and he was the first in the world to break the 2:04 time for the marathon run.

International runners came from 72 countries — including China, the US, Germany, Poland, Portugal, and Lithuania. The city of Hong Kong sent the greatest number of runners from outside Israel, followed by Los Angeles, Beijing and London.

The route started next to the Knesset and took the runners past the Mahane Yehuda market, Mount Scopus, the Old City, David’s Tower, and the Haas Promenade.

This year, the municipality connected marathon participants from abroad and throughout Israel by launching the “guest runner” project, wherein Jerusalemites host tourist runners in their homes.

But, perhaps befitting an event that marks 50 years since the reunification of the city, the vast majority of runners in the full, 42.2-kilometer marathon are Jerusalemites, the Jerusalem municipality said.

Our family is very proud of our cousin Miriam who came all the way from Texas to run the half-marathon in aid of Shalva (the Jerusalem respite home), along with her daughter, my cousin’s granddaughter from Toronto, my second cousins from Gush Etzion, my nephew and family from Jerusalem… the list goes on!

The marathon team from Dallas. Miriam is 2nd from left.

I hope they all get a very well-deserved rest on Shabbat, along with the rest of us. So I wish you all Shabbat Shalom!