The week has gone by without any postings from me for which my apologies. I will blame it on Pesach cleaning and other pressures, though I am trying to lighten my blogging load (in case you hadn’t noticed!). However I shall continue to post my Good News Friday posts as much as possible, even if you haven’t heard from me all week.

With that explanation out of the way, let’s go to this week’s good news. I shall start with some good news on the diplomatic front, where Israel’s ties with Arab countries have been, if not exactly warming up, defrosting slowly:

From Arlene Kushner, via Jews Down Under:

We have been hearing Prime Minister Netanyahu talk for some time about how Israel’s relationship with certain Arab nations is shifting.  And here we have growing evidence that this is the case:

According to Al-Araby (London), when Saudi Crown Prince Mohammad bin Salman was in Egypt last week, he met with “senior Israeli officials.”

“The report said the meeting focused on the normalization of ties between Israel and Saudi Arabia.”

Also last week, in yet another sign of their shifting policies, the Saudis gave permission for Air India to fly to Israel via Saudi airspace.  It has been decades since the Saudis permitted use of their airspace for any flight to or from Israel.

The importance of this decision is not just the political benefit. It has enormous practical benefit too as it will shorten the flight from Israel to India by around two hours, which will have the knock-on effect of bringing the airfare down. El Al has objected to the deal because it puts it at a disadvantage and they do have a point. But maybe in the not too distant future, if Saudi-Israel ties continue thawing, El Al too will be allowed to overfly Saudi Arabia.

And then there is this diplomatic first, as well:

“Trump administration officials worked the phones for weeks to bring Israeli and Arab diplomats around the same table at the White House, and finally succeeded in doing so for the first time on Tuesday.

“Senior administration officials said that several parties to the US conference, which focused on the dire and pressing humanitarian plight facing the Gaza Strip, had expressed that ‘they could not be in the same room as each other.’

“And yet, ‘we had discussions with them, and everybody realized the importance of being in the room,” one senior official told The Jerusalem Post after the six-hour conference…”

(Not quite everybody: I note that Jordan and Egypt seem to be missing.  We’re looking at the Gulf States. Qatar may be a factor here.)

“The discussion brought national security officials from Israel, Saudi Arabia, Qatar, the United Arab Emirates, Oman and Bahrain together for an exceptional diplomatic moment – the possible start of a regional dialogue over Israeli-Palestinian peace, ahead of the publication of a peace plan by the Trump administration meant to comprehensively end claims to the conflict.”

This items of news taken all together signify something much greater than simple regional diplomatic shifts. They represent a 180-degree turn in the attitude of the US Administration towards Israel, Iran, the Gulf States and the Palestinians. I had my doubts about the ability of President Trump, no matter how high his good intentions, to undo the damage done by Barack Obama with his malign treatment of Israel and his coddling of Iran and the Palestinians. Yet here we are, just over a year after Trump took office, and the change is palpable and having real effects on the ground.

We can add to all this Trump’s firing of Secretary of State Rex Tillerson because of his lenience towards Iran, and the appointment of CIA Director Mike Pompeo in his place. Pompeo is considered pro-Israel:

Pompeo, a 54-year-old former congressman for Kansas’s 4th District, is considered very supportive of Israel. His hardline positions on Iran are nearly identical to those of Trump and Netanyahu, who argue that the 2015 landmark nuclear agreement between Tehran and six world powers need to be significantly improved or abrogated entirely. 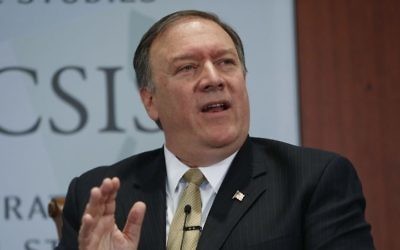 Tillerson’s decision to skip Israel during a trip to Egypt, Jordan and Lebanon earlier this year was seen by some as a snub of the Jewish State.

In contrast to Tillerson, who had never been to Israel before he accompanied Trump during his May 2017 visit, Pompeo visited as a congressman in 2015, receiving security briefings and visiting the Western Wall.

For a change things are looking up for Israel in the US Administration. Kol hakavod to Donald Trump as well as to all the diplomats and politicians in the background who have worked to bring about these radical changes. May their efforts lead us to a real peace agreement.

Moving now from the international scene to the local, an 86-year old Israeli guide helped rediscover the Incense Route that was lost for millennia: (via Reality):

At 86, the grandfather of Israeli hiking finally fulfilled a decades-long dream.

Over five days, trailblazing outdoorsman Yehoshua “Shuka” Ravek traversed some 100 kilometers (62 miles) by foot, walking from Petra, Jordan, to Avdat in the Israeli Negev. From February 18-23, Ravek walked along with a group of some 40 Israelis and, before crossing the border, a handful of Jordanians — and two camels. 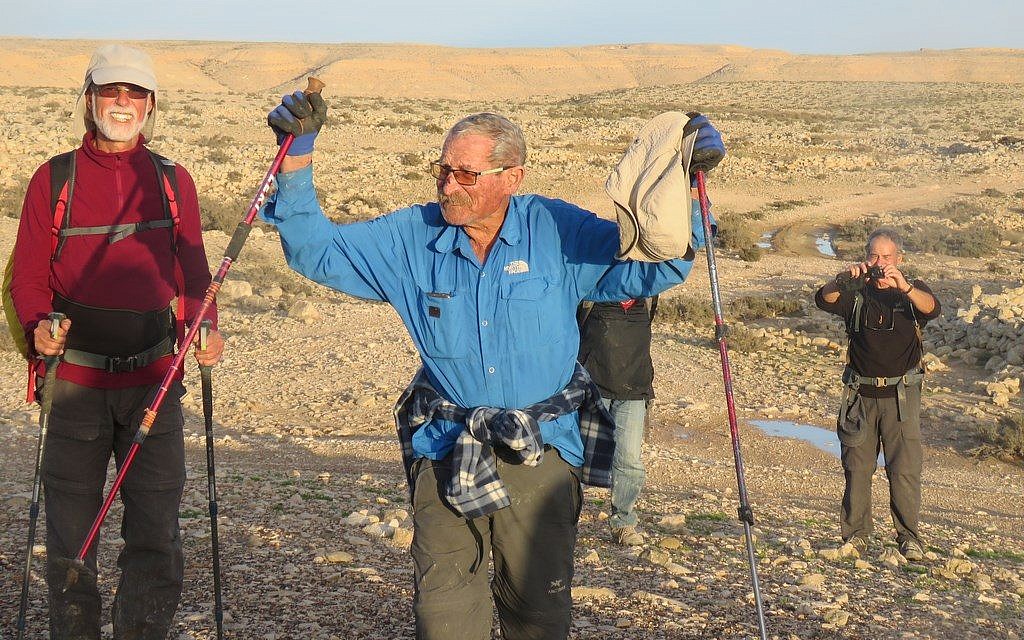 Why the camels? The octogenarian’s goal was to accurately retrace the steps of the ancient Incense Route, laid down circa 3rd century BCE by Nabatean traders. He wanted to see if the path, first used by the mysterious desert dwellers and later by the Roman invaders, could really have supported this means of transportation.

And if fulfilling a dream wasn’t enough, on the final day, the group of hikers discovered and mapped out a “lost” 7.5 km (4.6 miles) section of the path that had eluded searching scholars for decades. 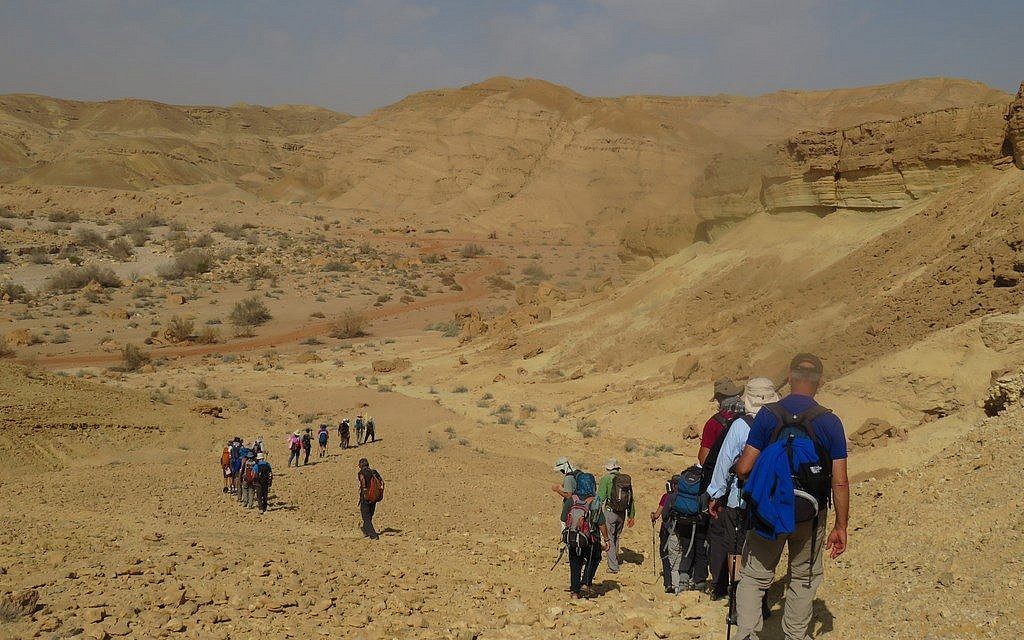 A portion of the 40-odd Israelis who hiked from Petra to Avdat along the ancient Incense Route, February 2018. (courtesy)

“I’m already 86 years old, almost at the end of my abilities. I walked the whole thing by foot, because I wanted to do it at least once,” Ravek told The Times of Israel this week. Having the opportunity to participate in discovering the new section Ravek said, “Filled my heart with joy.”

Read the article to see what efforts Ravek put into opening the route for hiking, and now he wants to hand it over to the authorities so that they can open a proper hiking path for tourists.

Kol hakavod to this wonderful man who did not give up on his dream, and lived not only to see it fulfilled, but even to make new discoveries while doing so. May Shuka Ravek continue to enjoy good health and strength to continue his explorations and hiking activities.

And now to conclude this week’s post with the most inspiring story I have ever read. Miriam Peretz is a very well-known personality in Israel, a woman of incredible courage, fortitude and warmth. She lost two sons in the IDF, 12 years apart, and her husband died of a broken heart after the death of their first son. Miriam also had a very hard, deprived childhood as an immigrant from Morocco. Yet she never let bitterness overtake her, and never let her profound sadness overwhelm her.

Instead she took her grief and transformed it into an inspiration for others by becoming a motivational speaker and writer. The story of her life, Miriam’s Song, written by Smadar Shir, is an inspiration for thousands. You can read the review here. This is just a small excerpt of the review:

In sharing her lived experiences with the readers of this book, Miriam demonstrates how she has integrated her traumatic experiences and associated emotions into her story and is able to live with them in a productive way. While there is no closure, no sense of wholeness, she has been able to survive “the test of life through suffering given to me through the One on High,” move forward, and grow alongside the pain and grief of multiple losses. She does this, with a deep faith in God, and by following a path in which: “Every day you wake up, and the question is what do you do with your life, what meaning you put into it…. Every day I pick myself up by myself, to a new battle for existence.”

And now, with Israel’s 70th anniversary on the doorstep, it is entirely fitting that Education Minister Naftali Bennett came knocking on Miriam’s door to tell her that she is going to receive the Israel Prize (Israel’s equivalent of the Nobel Prize):

Miriam Peretz was surprised to see Education Minister Naftali Bennett visit her today. She was even more surprised to learn that he was visiting to inform her she will be this year’s recipient of the Israel Prize for her life’s work in strengthening the spirit of Jewish-Israeli life. She broke down in tears and dedicated it to two of her children.

Mazal tov and kol hakavod Miriam on a very well-deserved award! Israel lost two heroes with the death of Miriam’s sons but Israel is the richer for having Miriam Peretz as one of our main cultural heroes.

May Miriam Peretz continue to find strength in the memory of her sons and husband, as well as in the living legacy they left behind, her other children and family, and all the rest of Am Yisrael.

May these thoughts inspire you as I wish you Shabbat Shalom!