The British Labour Party’s antisemitism crisis is going from bad to worse, and is totally not helped by the leader Jeremy Corbyn’s idiotic, if not malicious behaviour towards the Jewish community.

His latest antic was to attend a “Third Seder” (I bet you too had never heard of such a concept) held by a radical, anarchist, extreme-left Jewish group which calls itself “Jewdas”. (Yes, with all its connotations).

Who or what is Jewdas, of whom I had never heard till this week? Guido Fawkes gives us the lowdown: Jewdas called Israel a “steaming pile of *#!@ and called for its destruction. What lovely people! I’m sure they well represent the British Jewish community. Not.

The briefest of looks at the official Jewdas Twitter feed shows they are a far-left fringe group who do not believe Israel should exist.

As Guido so acerbically points out:

Corbyn could have met any mainstream Jewish group, instead he met one which calls for the destruction of Israel…

Guido Fawkes reports from the scene of this “Third Seder” :, an event, as others have pointed out, which has no religious connotation whatsoever since there is no Third Seder on Pesach, and which consisted, in its entirety, of making a juvenile mockery of Jewish traditions:

A leaked audio recording obtained by Guido reveals Corbyn was present at a Seder held by “Jewdas” in Islington, where guests shouted “f*ck capitalism” and booed the names of mainstream Jews. At the height of Labour’s anti-Semitism scandal, Corbyn chose to mark Passover alongside a fringe group that despises and is despised by mainstream Jews.

[Listen to the audio at the link].

At the Jewdas event tonight, Corbyn sat for several hours and brought beetroot from his allotment as a gift. In our audio recording, guests boo the name of Jonathan Arkush, the President of the Board of Deputies of British Jews, and shout “f**k capitalism”. Their blog post last week ended with the words: “Enough is enough. F*ck you all. Chag Pesach sameach”. Corbyn’s spokesman did not respond to a request for comment.

Corbyn could have chosen to meet with the Board of Deputies, the Jewish Leadership Council, the Jewish Labour Movement or another mainstream Jewish group. Instead he went to Seder with Jewdas, a far-left group which is shunned by mainstream Jews, called for the Israel to be “disposed of” and has launched vitriolic attacks against Corbyn’s Jewish critics. For Corbyn to meet such a group is outrageous, but to do so after everything that has happened over the last two weeks shows a complete contempt for mainstream British Jews. This is going to be very, very difficult for Jezza to explain…

UPDATE: Labour say Corbyn attended in a personal capacity not in his role as Labour leader. His own spokesman is dumping on him…

Labour MPs are queuing up to condemn their leader in response to our scoop last night. Wes Streeting tells Guido it was a “deliberate affront to the majority of British Jews”:

“What on earth was he thinking? This demonstrates either extraordinarily bad judgement or a deliberate affront to the majority of British Jews. Probably both. It calls into serious question the sincerity of every public statement Jeremy Corbyn has made on antisemitism during the past week, just as many of us hoped we had begun to make progress.”

“Jeremy Corbyn’s decision to spend his evening with an organisation that said “F *** you ” to Jews who have serious
and well founded concerns over antisemitism within the Labour Party, has truly topped off the worst week on record of awful relations between the Labour Party and the Jewish community.

When we called on the Leader of our Party to show moral leadership, and take decisive action to stamp out antisemitism, this is not what we had in mind.

Jewish Party activists have spent the weekend knocking on doors for local candidates for Council elections across the country. They do not deserve the indignity of our Leader making this situation even worse.”

“His actions so far do not match up to his words… The fact is that his first act following that is to go to a dinner last night with an organisation who on Thursday published a letter saying that this was all smears against Jeremy Corbyn and saying that this was a right-wing conspiracy to stop him becoming the Prime Minister of this country. The issue is the message he is sending to the community… The first act that he has done towards the community speaks volumes… the mainstream leaders were booed as their names were stated at last night’s dinner at which Jeremy Corbyn was present… Surely it cannot have been sensible, if Jeremy wishes to build bridges with the community, for the first act to be attending a dinner with people who are so hostile.”

“[Jewdas] refer to antisemitism in Labour as a smear. If Jeremy Corbyn goes to their event how can we take his stated commitment to be an ally against antisemitism seriously?”

“It was clearly deliberate. No question of intent. Mocking. And disrespectful.”

Harvela at Harry’s Place made an excellent comment: – Warning: Graphic and foul language in the screenshot below: 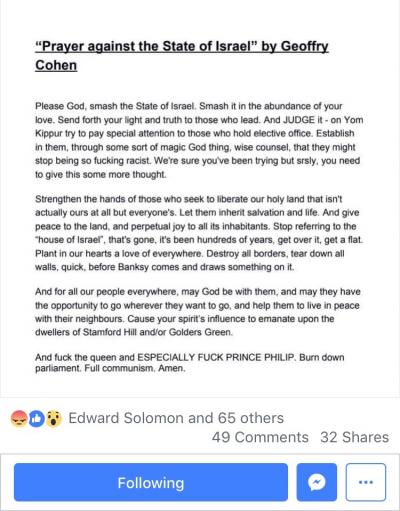 The above is Jewdas parody of the Prayer for state of Israel and a separate prayer for the well being of the Queen and the Royal family which is recited in English in every Synagogue every Sabbath. Jewdas anarchists have literally pissed on that prayer. This is who Corbyn met with last night which incidentally was not Seder night. That was Friday and Saturday night
I listened to the recording. It was a frenzied hysterical noise of laughter at each grotesque re working of the Seder service. A service which has passed down from generation to generation intact for three thousand years until this bunch of non entities came along. Anarchists like their predecessors the Yevsektsiya Jews of 1920 Russia who loathed their Jewish identity which prevented their assimilation into the Revolutionary Russia. They chose to obliterate their faith, customs, culture, religion, heritage and of course Early Zionism. This is Jewdas. A few hundred cultists who hate Judaism, democracy, capitalism and of course Israel.

Instead of taking Communal Seder with the chief Rabbi and learning of the tradition and symbolism of the Passover narrative, something shared with Christians in the Last Supper, Corbyn chose to spend it with a bunch of baying hyenas laughing at the injokes. It sits well with this ignoramus who has scant intellectual application. Jewdas and Corbyn. A match for sure

The Times of Israel has a good overview of the recent antisemitism scandal in the Labour Party – and horrifyingly describes how the average Labour voter thinks the antisemitism charges are “a smear”, created to bring Corbyn and Labour down:

Having recognized last week that allegations of anti-Semitism within the party have “too often been dismissed as simply a matter of a few bad apples,” Corbyn has chosen in recent days to associate himself once again with those who have publicly made that very case.

But however much his activities may infuriate the community, it would be wrong to think that Corbyn’s actions risk damaging his support within the Labour party itself.

New polling released over the weekend shows that nearly 80 percent of Labour members believe that the accusations of anti-Semitism are being exaggerated to damage Corbyn and stifle legitimate criticism of Israel. A similar figure approved of the Labour leader’s job performance, with 61% saying he was handling the anti-Semitism crisis well.

The polling also revealed the extent of opposition to Israel among Labour’s grassroots.  Nearly two-thirds (65%) of members said they believe the Jewish state to be “a force for bad” in the world — six points higher than the 59% who think the same of Iran (although it is worth noting that only 50% view their own country as a force for good, and 68% consider that the US exercises a malign influence globally).

The fury of many of Corbyn’s supporters at the charges of anti-Semitism was evident in an open letter signed by more than 2,000 of them which said that last week’s demonstration was the work of a “very powerful special interest group” whose organizers had used their “immense strength” to “employ the full might of the BBC” in order to launch an “onslaught” against the Labour leader.

In a disgraceful turn of events, the few Labour MPs who stood with the Jewish community at their “Enough is Enough” protest against antisemitism last week are now themselves being targeted by Corbyn supporters! The ToI report notes:

Labour MPs who attended last week’s demonstration have also come under attack from the Labour leader’s supporters, with at least one ordered to appear before her constituency party this week to explain why she chose to join a protest against what they dismissed as “unsubstantiated and unspecified” allegations of anti-Semitism. 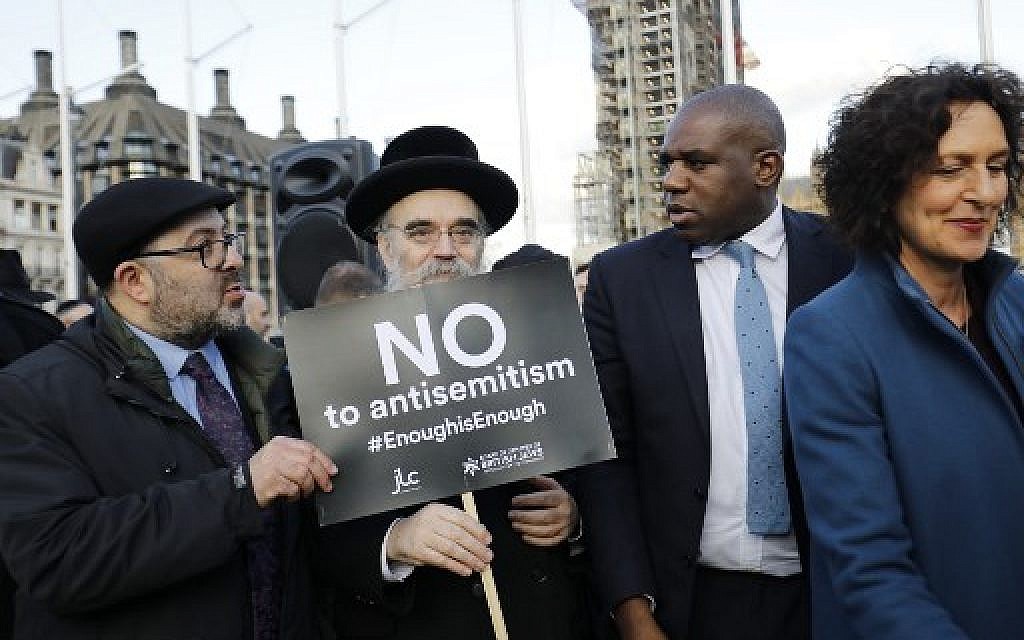 More worryingly, Luciana Berger, the Jewish Labour MP who first demanded that Corbyn explain his defense of the anti-Semitic mural, has also revealed that she has received “a torrent of abuse from people purporting to be of the left” over the past week and has called in the police.

What will now become of the Labour Party?

In many regards, this is a new party and the events of the past 10 days may make it even more amenable to Corbyn. Many members, appalled by the accusations of anti-Semitism faced by the party, are voting with their feet.

Hundreds reportedly resigned their membership last week and more than 3,000 did not renew their direct debits.

But Corbyn also appears to have attracted a darker following, too. Last weekend’s Sunday Times investigation into 20 of the biggest pro-Corbyn Facebook groups uncovered more than 2,000 racist, anti-Semitic, misogynistic, violent and abusive messages.

Some moderates are determined to stay and fight. More than 2,000 people signed a petition by the centrist group Progress and its ally Labour First calling on Shawcroft to resign from the party’s governing body.

However, there is a hard dilemma that both they and the Jewish community must soon grapple with: To what extent does the Labour party as Britain has known it for the past 118 years actually still exist?

I think the answer is No. Certainly not as it used to be.

We have to hope and pray very hard that Jeremy Corbyn and his dangerous parody of a Labour Party never get anywhere near the keys to 10 Downing Street.