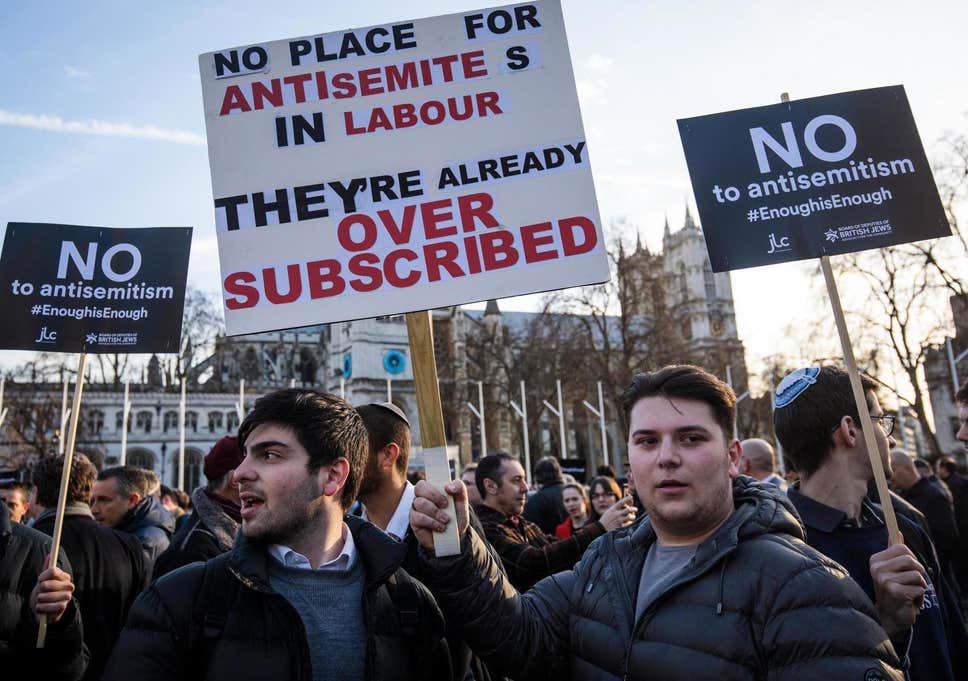 One would have thought that the antisemitism scandal in the British Labour Party would finally have been dealt with by now, rooted out at source. But nothing seems to have changed. It appears that Labour leader Jeremy Corbyn simply cannot understand what antisemitism is, even when it is staring him in the face.

Matters have come to such a head that last week the House of Commons held a special debate on antisemitism – an unprecedented event. The Jewish Chronicle brings us the highlights:

Amid some of the most emotionally charged scenes Parliament has witnessed in recent years, Jewish MPs were at the centre of a fight-back over the Labour Party’s failure to tackle the antisemitism crisis that has escalated under Jeremy Corbyn.

Labour MPs including Dame Margaret Hodge, Luciana Berger and Ruth Smeeth received standing ovations from colleagues across the party divide as they detailed the threats and abuse they had received.

During a three-hour debate, a series of powerful speeches provided a snap-shot of manifestations of contemporary antisemitism from the far-left and far-right.

In an angry intervention, Ian Austin highlighted his party’s failure to expel Ken Livingstone, the former London Mayor, over his comments regarding Adolf Hitler and Zionism.

“Let me be clear about this, Ken Livingstone claimed that Hitler was a Zionist,” said the Dudley North MP. “That is antisemitism, pure and simple.

“It happened more than two years ago and there has been ample time to deal with it, so it is a disgrace that it has not been dealt with. Kick him out immediately.”

Joan Ryan, chair of Labour Friends of Israel, said Holocaust denial was used to try to undermine “the moral foundations upon which the state of Israel was established 70 years ago”.

She added: “Jewish people tell us that the scenes they witness at some Labour party meetings, the bile they view on social media, or the words they hear in defence of an antisemitic mural, cause them great offence, we should not question, ridicule or reject such an assertion, but accept it and tackle it — full stop.”

Stewart McDonald, the Scottish National Party’s Glasgow South MP, also noted how when any conflict involving Israel arose it was “unacceptable to expect Jewish people in this country to shoulder any responsibility for that escalation”.

Detailing his own Jewish background, Conservative MP Robert Halfon recalled “being at a synagogue where the rabbi said to the Jewish people inside, ‘please do not congregate outside when we finish the service because you might get abuse or something even worse.’

“I thought, how can it be, in the 21st century, when we thought we had escaped the horrors of Nazi Germany, that Jews are told that by a rabbi in a synagogue?”

Expressing his admiration and friendship with many Labour MPs, Mr Halfon added: “I genuinely believe that the current Labour leadership is, at best, turning a blind eye to the problem and, at worst, condoning antisemitism.”

Below I bring you a series of the courageous, hard-hitting speeches at the debate:

The Jewish Chronicle’s report records John Mann’s experiences in his powerful speech – and keep in mind, he is not Jewish:

John Mann, chair of the All-Party Parliamentary Group Against Antisemitism, delivered a speech that outlined his long-time commitment to campaigning against antisemitism — and the horrendous abuse he has faced as a result.

Mr Mann singled out the far-left Momentum group which he said was “targeting Jewish members of the parliamentary Labour Party because they are Jewish”.

The grassroots organization Campaign Against Antisemitism (CAA) makes special mention of Lisa Nandy, the Vice Chair of Labour Friends of Palestine – who laudably attacked the antisemitism in her own party:

One particularly powerful contribution was by Lisa Nandy, the Vice-Chair of Labour Friends of Palestine. She praised Israeli women she had met who had reached out to advocate for Palestinian women in the spirit of peace, and rounded on members of her own Party who mistakenly prevented such possibilities of rapprochement by seeking to “divide and sow hatred when they have managed to reach across the divide and do the opposite”. She referred to “a particular sort of antisemitism that has found its home in the far left throughout history”; the “horrific mural” that Jeremy Corbyn had defended; demanded that Ken Livingstone be expelled and that the “thousands” of outstanding cases of antisemitism be dealt with immediately; and she  referred to the “acres” of antisemitism she had witnessed. In two short minutes, she more accurately analysed the realities of Labour antisemitism than the newly enobled Baroness Chakrabarti had managed in producing her entire report.

In that same article however. the CAA note Jeremy Corbyn’s aloofness and silence during the debate:

Yesterday, [17th April -ed.] the House of Commons witnessed an extraordinary debate on antisemitism. It was extraordinary because it had to happen at all; for its emotion, but most of all for the testimony given by MPs, especially Labour MPs, and the blame they laid at the door of the Labour Party’s Leader, Jeremy Corbyn.

Mr Corbyn walked out early on, although he returned some time later. He sat as if apart, mostly as though sucking a lemon. From time to time he would, as Mr Percy described it “chunter”, as if mocking the proceedings, or else shook his head. Sometimes he was heard to say “Disgraceful” at the criticism levelled at him. Despite Sajid Javid calling early on for him to use the opportunity of the debate to “clarify his position on antisemitism”, Mr Corbyn sat in aloof, in apparent disdain.

Finally, Ms Abbott joined the debate at its close. At first she refused to give way to interruptions, insisting on talking about topics unrelated to the debate, at one point seemingly implying that as she had received even more abuse than Jewish women, as though racism against them was somehow invalidated. As disquiet at the deflections these statements constituted grew in the chamber, she finally moved to admit that antisemitism was a problem within the Labour Party, and made promises of the vaguest and most ineffectual sort: of an extra lawyer to be hired, and of education for Party members, before darkly accusing those on the Conservative benches of making political capital and of alleging Mr Corbyn is an antisemite. Wes Streeting immediately rose to say his own front bench’s response would leave Jews “horrified”.

Corbyn finally relented and arranged a meeting with the Board of Deputies and the Jewish Leadership Council (JLC), both of whom had organized the Enough is Enough demonstration a month ago. This meeting came after an earlier meeting fell through since Corbyn wished to include the Jewish Voice for Labour, which, similar to Jewish Voice for Peace, is not representative of Jewish voices at all, being of the extreme hard-left anti-Israel variety, and which the BoD and JLC refused to meet.

But the meeting which did finally take place disappointed the Jewish leaders, as they write in the Standard:

First the good news. In our meeting to discuss anti-Semitism in the Labour Party, its leader, Jeremy Corbyn, was warm, engaged and seemed genuinely troubled by the anti-Semitism in his party and eager to reassure us that he was on top of it.

However, the sinking feeling was evident among all of our delegation as over the course of our two-hour-plus meeting it began to occur to all of us that he was not going to agree to even one of the measures we suggested that the Labour Party should adopt to rid the party of this blight.

We asked that Labour put in a fixed timetable to deal with anti-Semitism cases; Corbyn and his team said that would not be possible.

We asked that they should expedite the long-standing cases involving serial offenders Ken Livingstone and Jackie Walker; Corbyn made only vague commitments.

And so it goes on. Their conclusion was inevitable:

Our sole objective from this meeting was to build trust with Corbyn, but this will not be possible until he and his party brings about a deep cultural change in his supporters’ attitude to Jews.

The CAA baldly state that no one should have been surprised at the failed outcome. They locate the source of the problem with brutal clarity:

Mr Corbyn’s power, from Labour’s National Executive Committee down to the grassroots on social media, is owed to the very places where antisemitism has emerged so strongly. To move against them would be to stand up to his supporters at a time when he is vulnerable. He will not do it.

… even on the day of the meeting, he was sending mixed messages, with a carefully-crafted comment article in the Evening Standard simultaneously apologising for antisemitism whilst extolling the virtues of anti-Zionism, whilst in off-the-cuff comments he made clear to journalists that he sees no particular problem in the Labour Party. Now, unsurprisingly, the meeting has ended with nothing to show, and all that has happened is that Mr Corbyn has bought more time.

In the meantime, the Jewish community should afford the Labour Party no further meetings.

Stephen Pollard on Jeremy Corbyn meeting: "It seems to me this isn't a serious attempt to deal with anti-Semitism, it's an attempt to neutralise it as an issue."@JuliaHB1 | @stephenpollard | @JewishChron | https://t.co/sv3MZUm41c pic.twitter.com/XZSzQq90M9

I’ll conclude with this despairing video by Rabbi Jonathan Sacks in which he confesses he is ashamed at the antisemitism sweeping Western society. I say to Rabbi Sacks that he has no need to be ashamed. It is the antisemites, and teh societies which tolerate such bigotry that ought to be ashamed.  The good Rabbi is to be applauded for speaking out so consistently and courageously against hatred:

"I am ashamed." Former Chief Rabbi Lord Jonathan Sacks says too many good people seem to be doing nothing to combat anti-Semitism. #r4today pic.twitter.com/Ab6oHelTBd