Huge missile strike on Syria: did Israel do it?

The answer to the above question is: I blooming well hope so! The strike was so big that it caused a minor earthquake! 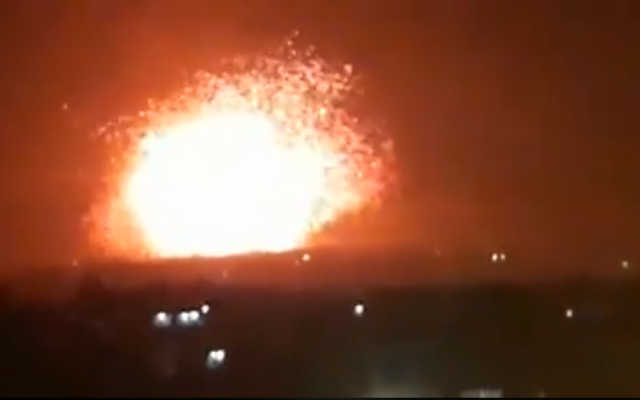 The explosion at the missile base outside Hama, Syria

Let’s go to the story:

The Syrian Observatory of Human Rights said the fighters had been killed in a raid, “probably” carried out by Israel, on the 47th Brigade base in Hama.

“At least 26 fighters were killed, including four Syrians,” said Rami Abdel Rahman, the head of the Britain-based war monitor. “The others are foreign fighters, a vast majority of them Iranians.”

“Given the nature of the target, it is likely to have been an Israeli strike,” he said, adding that strikes also hit an air base in nearby Aleppo province where surface-to-surface missiles were stored.

All the usual suspects were either blamed or took credit:

While some sources blamed Israel for the strikes, Syrian state-owned news site Tishreen said late Sunday the raids were carried out by United States and British forces. The Western troops launched nine ballistic missiles from military bases in northern Jordan that struck Syrian bases near Aleppo and Hama, the news outlet said on its Facebook page.

Other media outlets claimed the attacks were carried out by aircraft bombers, and Hezbollah-linked sources and other regime outlets attributed the strikes to Israel.

There was no official statement from the US or Britain about the attack. As a rule, the Israeli Air Force does not comment on its activities abroad.

Israel’s Intelligence Minister Israel Katz told Army Radio on Monday morning that he was “not aware” of the latest strikes.

But, he said, “all the violence and instability in Syria is the result of Iran’s attempts to establish a military presence there. Israel will not allow the opening of a northern front in Syria.”

Videos of the blast show a fireball light up the night sky.

The Hama facility was said to house a weapons depot, which accounted for the size and intensity of the blast, which could be seen from kilometers away and reportedly registered on seismographs in the area.

The Orient news outlet noted that the base was known to be the headquarters of Iranian militiamen and had been “heavily involved” in attacks against rebel forces in the area.

Earlier this month, seven Iranian military personnel were killed in an airstrike on Syria’s T4 air base in Homs. Syria, Iran and Russia blamed Israel for that attack. Israel did not confirm or deny it.

Syrian based reports say that more than 200 missiles were destroyed in the blast.

The geopolitical implications of this strike are far-reaching and complex, suggesting a US-Israel message to Russia and Iran:

An increasing number of media organizations associated with the Syrian regime and Hezbollah are hinting that Israel was responsible. According to a report in the Al Akhbar newspaper, identified with Hezbollah, bunker buster missiles, which do not explode on impact but rather deep in the ground, hit bases in the Hama and Aleppo areas. Hence the “earthquake.”

The base that was attacked in the Hama area belongs to the 47th Brigade of President Bashar Assad’s Syrian Army, but apparently there were many Shiites and/or Iranians in the area. … Whatever the case, it is clear that the strike was highly unusual in several respects.

First and foremost was the sheer power of the attack. The pictures and the sounds, and the large number of casualties, point to an incident of larger scale than those to which we have become accustomed. We are not talking here about just another strike on another Hezbollah convoy, but rather what would appear to be a new step in what is now the almost-open warfare being waged between Iran and Israel in recent weeks on Syrian territory. The same player that earlier this month attacked the T-4 airbase, from which an Iranian attack drone was launched into Israel in February, apparently struck again overnight Sunday-Monday, taking the gloves off and moving into a new level of military confrontation.

Second, not only is the attacking force not rushing to take responsibility, but those who are being attacked are not hurrying to assign blame.

Indeed, one newspaper associated with the Assad regime, Tishreen, has even claimed that the attack was carried out by US and UK forces using ballistic missiles fired from Jordan. This report would appear to be somewhat improbable, but the bottom line is that Damascus, Tehran and even Moscow would seem to be wary at this stage of issuing declarations that might require them to retaliate against Israel, or cause them to appear to be making empty threats in light of Iran’s repeated public promises after the last attack, on T-4, that retaliation against Israel would emphatically follow. 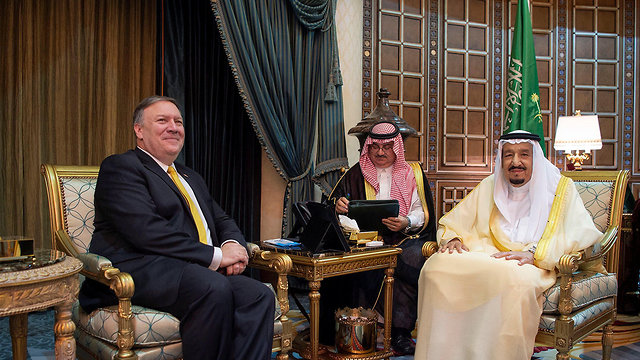 Third, the latest strike was carried out at a time when the US Secretary of State Mike Pompeo is visiting the region, and just a few hours after he held talks with Prime Minister Benjamin Netanyahu. The two of them used the opportunity to issue no shortage of threats and promises to thwart Iran’s aggression and nuclear ambitions.

Late Sunday, news also broke of a phone call between Netanyahu and US President Donald Trump. Israel’s Defense Minister Avigdor Liberman has been meeting with his US counterpart James Mattis in Washington. And less than a week ago, Gen. Joseph Votel, the head of the US army’s Central Command, or CENTCOM, whose sphere of responsibility includes Syria and Iran, made a largely unpublicized visit to Israel.

All this is beginning to look rather like a coordinated Israeli-American operation to limit Iran’s military activities in Syria — simultaneously conveying the message to Moscow that Russia’s green light for Iran to establish itself militarily in Syria is not acceptable in Jerusalem and Washington.

Of most specific relevance, however, is the fact that in less than two weeks the Trump administration will make its decision on whether or not to withdraw from the Iranian nuclear deal.

The Jerusalem Post also analyses who was to blame for this massive airstrike and why the blame was cast about with such abandon by Syria, blaming the US, the coalition, Syrian rebels, and even Russia itself:

So why did pro-regime accounts spread rumors blaming the Coalition for the strikes? Why did pro-regime media switch from reporting the “aggression” to ignoring it? It appears that because they knew no one could ignore the massive scale of the explosion, there had to be some explanation. It may have been embarrassing for the regime to assert that Israel had been responsible, because then it would have to admit that Russian air defenses were not activated, despite assertions that future strikes would be challenged. This made it easier for pro-regime activists to create a convoluted and complex story blaming the US for strikes from a “new” location near Jordan. But by the morning, such necessities to blame the US for the strike evaporated into a decision to simply move on. There are still dozens of killed and wounded at the Hama base. Details of their condition and the base itself have yet to emerge.

None of this aggression appears to have cooled Iran’s hostility towards the US. Iranian leader Ali Khamenei threatened to hit the US multiple times if it enters the conflict against Iran:

“They know if they enter military conflict with Iran, they will be hit multiple times,” he said in comments during a meeting with workers, according to his website. He did not specifically refer to the latest attack in Syria, which claimed the lives of at least 26 people—most of whom were Iranians. 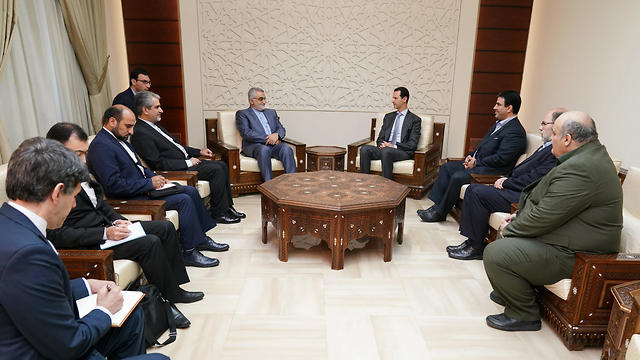 Khamenei also hit out at the United States a day after new Secretary of State Mike Pompeo visited Riyadh, accusing Washington of trying to stoke a “regional crisis” by provoking its ally Saudi Arabia to confront Tehran.

“Americans are trying to provoke Saudi Arabia against Tehran … Their aim is to create more regional crisis … to push Muslims to fight against Muslims.”

Khamenei’s remarks were aired a day after Pompeo met Saudi King Salman in Riyadh on a flying visit to the region.

Pompeo said on Sunday during his visit to Israel that the United States was deeply concerned by Iran’s “destabilizing and malign activities” in the Middle East.

Since Donald Trump came to power and with the collapse of all Obama-era agreements in the Middle East all the old alliances are shifting and realigning. On the one hand this makes for very interesting if unusual political bed-fellows, with Saudi Arabia aligning itself with the West and even Israel.

Donald Trump is considering abandoning the nuclear deal with Iran which will reshuffle the regional cards in possibly a very dramatic way.

Russia seems to be playing a double game, supporting Assad, acting neutrally towards Iran while not overtly supporting it, and yet taking heed of Israel’s position and not overtly threatening Israel. It seems that Russia wants to have its cake and eat it. They want to have their warm-water sea-port and don’t mind if Assad kills his entire people as long as they can have their own little power base. But they are wary of Iran’s ambitions even though Iran is itself supporting Assad. Yet on the third hand they understand Israel’s position even though some of their actions undermine us.

The extreme volatility of the region is cause for extreme vigilance, especially for Israel.

20 Responses to Huge missile strike on Syria: did Israel do it?