Yom Yerushalayim, Jerusalem Day, the anniversary of Israel’s miraculous win over combined Arab forces in 1967, began last night (Saturday night) with festive prayer services in synagogues around the country. This year we mark the 51st anniversary of the reunification of Jerusalem, as well as the liberation of Judea, Samaria and the Golan Heights (and the Gaza Strip but that’s another story) in the Six Day War. The day is not a national holiday in Israel but it is marked with special ceremonies, prayers and celebrations in schools, municipalities, youth clubs, and of course throughout Jerusalem.

Yom Yerushalayim took on extra significance this year with the confluence of  several very important dates and events. 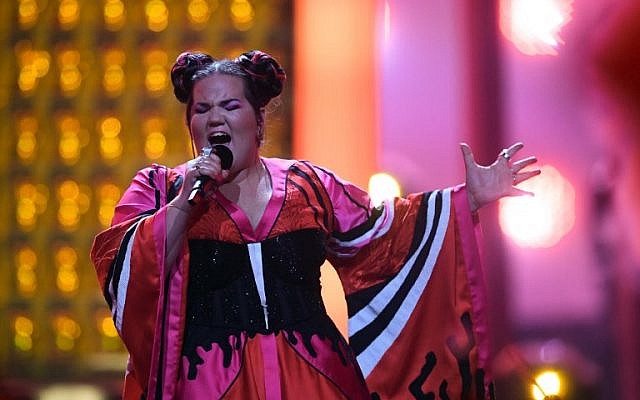 Netta Barzilai wins the Eurovision with her song “Toy”

The real action will take place tomorrow with the opening of the American Embassy (see the end of this post), but there was plenty of action last night and today.

Tens of thousands of Israelis paraded through Jerusalem, to the Old City and the Kotel:

Some 45,000 people paraded through the the Old City of Jerusalem under heavy police security on Sunday in an annual, often tense, Flag March, this year marking the 51st anniversary of the reunification of the city during the 1967 Six Day War. 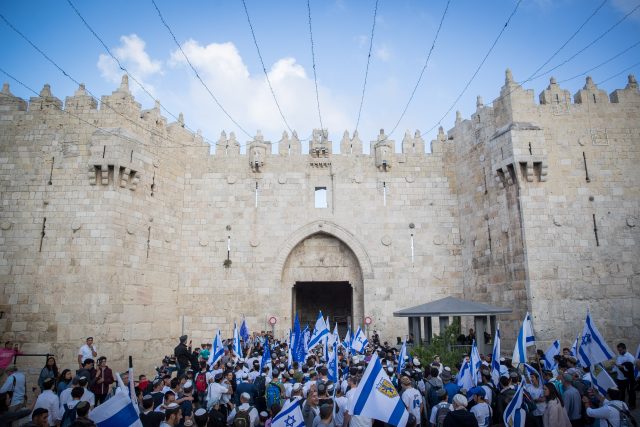 The march began in downtown Jerusalem and moved slowly toward the Western Wall in the Old City, a distance of about one kilometer (0.6 miles). Some 1,750 police were deployed to secure the rally.

As it reached the walls of the Old City, the march split in two, as it traditionally does every year, with half continuing on through Jaffa Gate while the other half controversially passing through the flashpoint Damascus Gate and the alleys of the Muslim Quarter to reach the Western Wall.

Unfortunately the day was not without its controversies or violence:

Left-wing activists organized a counter-protest to show solidarity with the Arab shop owners and residents.

That is perfectly acceptable in a democracy, even if we don’t agree with their views. However the following is completely unacceptable:

Earlier Sunday Jews and Muslims clashed on the Temple Mount in the Old City, with police detaining Jewish visitors who had raised an Israeli flag.

Violence broke out on the Temple Mount on Sunday morning between personnel from the Muslim Waqf, the entity that administers the holy site, and a group of Jews who were praying and singing there in celebration of Jerusalem Day.

Jewish organizations linked to the Temple Mount said over 1,600 Jewish visitors had entered the compound by lunchtime Sunday, the highest number to arrive in a single day since 1967.

Hundreds of Jewish visitors lined up early Sunday to enter the Temple Mount and mark the anniversary of the city’s reunification after the 1967 Six-Day War.

Arabs in the compound began shouting insults at a group of Jewish visitors, who responded by breaking into song. A physical altercation ensued.

Footage of the incident shows Waqf personnel attacking some of the Jews. Security at the compound had been increased ahead of Jerusalem Day, and security officers separated the two groups.

Some of the Jewish visitors had used the singing as cover to pray aloud, which is prohibited. When police saw what they were doing, they were detained.

“There were dozens of worshippers and singers on the mount, and the Waqf began the mayhem,” Israeli journalist Arnon Segal told Israel Hayom from the scene.

“Despite the bedlam, entrance to the site is ongoing. There are people arrested among the [Jewish] worshippers and among the rioters.”

Several minors, among them the son of Habayit Hayehudi MK Bezalel Smotrich, waved Israeli flags at the site.

I have said time and again that it is absurd and outrageous that on the Temple Mount of all places, the Jews are discriminated against and are not allowed to pray freely, especially on their festive days. And when violence ensues, the police take the easy way out and expel the Jews, not the violent Arabs.  When will we exert our preciously earned sovereignty?

In honour of Yom Yerushalayim, President Reuven Rivlin, a 7th generation Jerusalemite himself, gave an interview to the Jerusalem Post where he describes Jerusalem, then and now:

President Reuven Rivlin was not yet nine years old when the state came into being, but young as he was, he could understand the significance of that momentous turn of the tide in Jewish history – from a people almost exterminated during the Second World War to a nation reborn only three years after that war ended.

Jerusalem then and now, according to native son President Reuven Rivlin https://t.co/YSeDmrYAib

His mother, Rachel, had been an active member of the Irgun, one of the Jewish resistance movements that fought the British, and it was almost impossible for him and his siblings not to know something of her activities, and why she was involved.

Before the establishment of the state, Rivlin frequently accompanied his father, Prof. Yosef Yoel Rivlin, to meetings with academics – both Jewish and Arab, and from time to time they went to the Old City, especially for the concluding prayers on Yom Kippur, so that they could hear Rabbi Moshe Halevi Segal blow the shofar by the Western Wall, even though such an act was frowned on by the British Mandate authorities who did not want to sanction any activity that would antagonize the Arab population.

After the reunification of Jerusalem in June 1967, Segal was the first former resident of the Old City to return there to live.

ALMOST EVERY Jew is aware of the aspiration “Next year in Jerusalem” that is part and parcel of Jewish liturgy. Rivlin noted that this attachment to Jerusalem was a form of Zionism that preceded the political Zionist movement that was initiated by Theodor Herzl, who is credited with being the visionary of the Jewish state.

“It was a mystic Zionism,” he said, referring to a book, Vision of Zion, which was written by Rabbi Eliahu Ben Solomon Zalman, better known as the Gaon of Vilna.

A movement established by followers of the Gaon of Vilna in 1771 came to Jerusalem in 1809 hoping to greet the Messiah.

The Hebrew calendar year was Tav Kuf Ayin, which the Gaon of Vilna interpreted as the blowing of the shofar to hail the arrival of the Messiah.

The Rivlin family was among those who came at that time.

When the Messiah didn’t come in 1809, it was thought that he might come in 1840, but again he failed to do so. Rivlin jokes that the descendants of the followers of the Gaon of Vilna have been going to bed with their shoes on ever since, so that if the Messiah does arrive they can run out to greet him.

At that time all the Jews in Jerusalem lived in the Old City.

Read the rest of Rivlin’s story and the history of Jerusalem. It is quite fascinating.

The ceremony marking the anniversary of the reunification of Jerusalem took place this evening (Sunday) at Ammunition Hill, in the presence of President Reuven Rivlin, Prime Minister Binyamin Netanyahu and Mayor Nir Barkat.

“The unification of the city and the victory of the battles in all parts of the country have placed in us a pride that we have never felt and at the same time, pain and heartbreak. A heartbreak for our friends who did not see the day after the war,” President Rivlin said in his speech.

Rivlin’s words fall into sharp focus when we take our minds back a mere 51 years ago. Most of us have almost forgotten – or we have never known – what it was like to NOT be sovereign in Jerusalem, and how close we came to annihilation.

Lenny Ben David has a remarkable photo essay on Twitter reminding us what those dark days were like:

#JerusalemDay today, commemorating the reunification of the Holy City in the 1967 war on this Hebrew date.
It wasn't always like this. pic.twitter.com/HQxXya3Pnc

Arab attacks and pograms against #Jerusalem's Jews forced them to flee the Old City in 1929 and 1938. They returned to the Old City but not for long.
Pics 1929 and 1936 pic.twitter.com/34mYGeE0EB

In 1948, Jordanian Legionaires invaded #Jerusalem's Old City, exiled or imprisoned its Jews, and destroyed Jewish schools & synagogues.
Not one Jew was left in the Old City. The Jewish Quarter was destroyed. pic.twitter.com/GsAMgSNdTJ

This is how the Western Wall looked after 1948, with a Jordanian soldier and policeman protecting the "judenrein" status of the Kotel.
Until 1967, and Jordanian guns opened fire on the Jewish "new city" of #Jerusalem. Israel responded. pic.twitter.com/GPtBdyrGzB

But let us end on a high note. Lenny Ben David concludes with this fabulous photo of Jerusaelm today, on Yom Yerushalayim:

#Jerusalem Day today. Celebrations at the Western Wall. The Holy City is open to worshippers of all faiths today.
/End pic.twitter.com/wH6HEzFbyD

Chag Same’ach, and may we merit to see the Temple rebuilt in renewed Jerusalem, Amen!

Meanwhile the first steps to Jerusalem’s renewal as the internationally recognized capital of Israel took place today with a red, white and blue extravaganza to thank the US for its courageous and principled stance:

About 24 hours before US Ambassador David Friedman will unveil a plaque at the new embassy’s site in the Jerusalem neighborhood of Arnona, Israel’s Foreign Ministry staged a lavish reception the likes of which this office building has rarely if ever seen before. 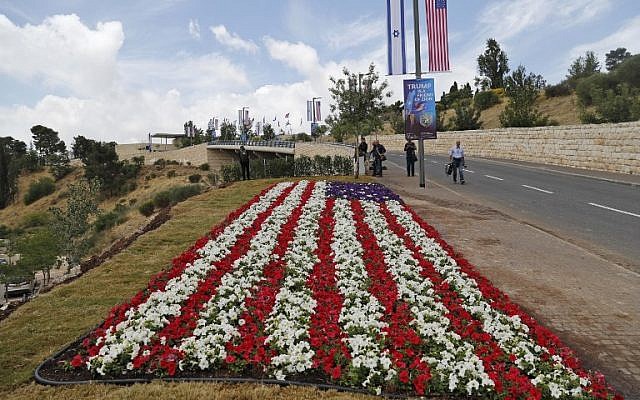 An American flag flowerbed planted next to the compound of the US consulate in Jerusalem, which will host the new US embassy on May 13, 2018, AFP PHOTO / Ahmad GHARABLI

The ministry’s usually dreary-looking dining room was artfully decorated with flags and flowers, crates of watermelons and buckets of tomatoes.

“It’s a day that few of the experts ever imagined they would see. But it is happening,” said former Foreign Ministry director-general Dore Gold, a longtime linchpin of US-Israel ties. “I don’t fear for its aftermath, because it will insert an extraordinary degree of realism in the discourse on Middle East affairs.” 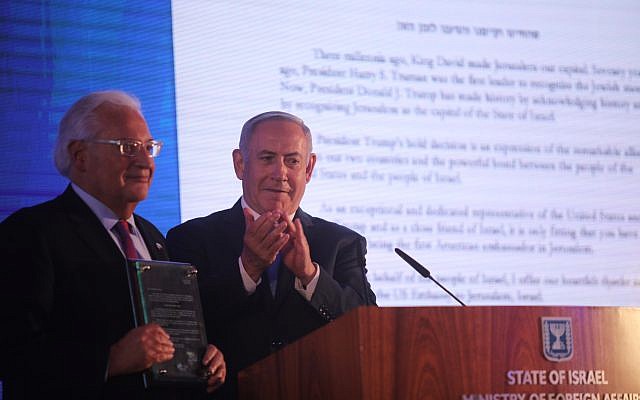 Prime Minister Benjamin Netanyahu, right, together with US Ambassador David Friedman, at a welcome ceremony at the Foreign Ministry, ahead of the official opening of the US Embassy in Jerusalem, May 13, 2018. (Hadas Parush/Flash90)

The real VIPs — Prime Minister Benjamin Netanyahu, Jared Kushner and his wife Ivanka Trump — did not participate in the mingling, but immediately went to their seats in the front row.

The hour-long ceremony, held in a huge white tent in the Foreign Ministry’s backyard, began with Hatikva and the Star-Spangled Banner.

Then a video about the history of US-Israel was screened, including sound bites from Martin Luther King, Bill Clinton, Netanyahu and Donald Trump. The crowd cheered frantically when Trump declared over the speakers that, “Today, we finally acknowledge the obvious: that Jerusalem is Israel’s capital.”

President Trump is making history. We are deeply grateful for his bold decision to recognize Jerusalem as Israel’s capital and to move the embassy there tomorrow! 🇺🇸🇮🇱 @realDonaldTrump pic.twitter.com/AkXk010v1L

Stay tuned over the next couple of days for reports about the Embassy opening.

Meanwhile, enjoy Jerusalem and rejoice in her rebuilding!