More on anti-Israel media bias re Gaza, plus a mea culpa

This is the gift that keeps on giving, the subject that never dies away. As I have written previously, and especially in this latest round of clashes in Gaza, the automatic bias in international forums against Israel is almost Pavlovian. As soon as Israel takes active measures to defend itself Israel is condemned for disproportionate actions, war crimes, and generally being a Bad Thing that ought to be gotten rid of.  UN resolutions abound, ambassadors are humiliated and expelled, and the media get out their blood-libel textbooks in order to copy it out for the next day’s headlines.

Here are some more interviews and articles which are sure to raise your blood pressure. Don’t say I didn’t warn you!

Via Daphne Anson, here is the indefatigable Ambassador Mark Regev on UK Channel 4. How he keeps his cool I don’t know but he ought to be awarded a medal. I found myself screaming at the screen:

Here is an Israeli embassy spokesman on BBC Breakfast TV:

The Guardian’s editorial demonstrates its unbridled hatred of Israel

The Independent wheels out its blood libel machine as it accuses Israel of “gassing” a Gaza baby (which turned out to have died of pre-existing causes).

But all is not lost. Not quite.

The editor of the Jewish Chronicle, Stephen Pollard, issued a stupid and shameful tweet about Gaza a few days ago: 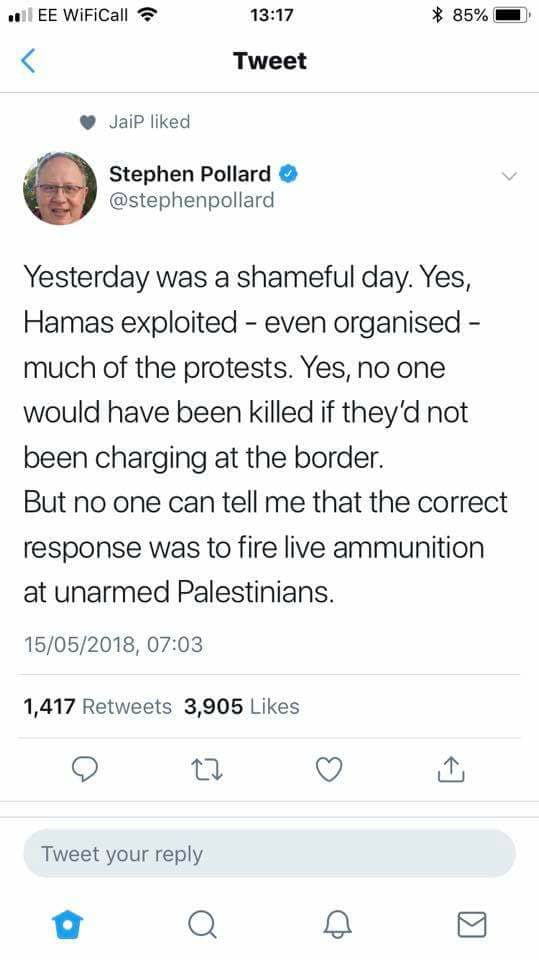 His tweet gave the backing to a revolting libellous article in the daily Express of which he is also the editor, as Edgar Davidson explains:

Yesterday Jewish Chronicle editor Stephen Pollard Issued an appalling statement slamming Israel for defending its border against the genocidal hordes led by Hamas. Today the Express newspaper of which he is also Editor has published one of the most vicious and unbalanced anti-Israel hit pieces I’ve seen. It is based on a blood libel – it was known yesterday that this baby’s death had nothing to do with Israel ( the baby died of a pre-existing condition). The unprecedented full page story (the Express rarely does this for foreign news) is straight Hamas propaganda. It uses Hamas sources as facts but puts Israeli claims in sarcastic quotes. The worst reporting. Would like some explanation from Pollard.

This was followed by an equally stupid and shameful article by the JC’s reporter Daniel Sugarman who wrote that Israel should be condemned for its overwhelming response to the Gaza rioters.

Two days later and Sugarman had the grace to admit he was wrong and say that he was ashamed of himself:

To admit you’re wrong. To announce publicly, “I made a mistake”.

But to apologise when that apology comes bound up with what is, perhaps, the most intractable conflict on earth, makes it a thousand times harder.

But that is what I am. Sorry.

A few days ago I wrote a column about the latest round of violence on the border with Gaza.

But the criticism I paid more attention to was from people who pointed out that it was absurd to deal in hypotheticals. I’d said that surely there must be a way the protestors could be stopped without shooting live ammunition at them – that Israel, with its incredible technological capabilities, must be capable of developing a way. That was a cry of anguish, but it was not an argument. If no such technology currently exists, then it was absurd of me to blame the IDF for not magically willing it into existence. The traditional crowd stopping technology would not have worked effectively. Rubber bullets are only short range. The same with water cannons. And with tens of thousands of people rushing the border, this would have been extremely unlikely to work effectively. The border would have been broken through. And then, without much of a doubt, a lot of people in Israel would have died. That was, after all, Hamas’s stated aim.

But what really affected me the most was yesterday, when a Hamas operative went on television and claimed that, of the 62 people killed in the last two days, fifty were Hamas operatives. Islamic Jihad claimed three more, meaning that over 80 percent of the people who were killed while trying to breach the border were members of terrorist organisations whose direct aim is to bring death and suffering into Israel.

And I opened my eyes and saw what I had done.

I had fallen into the trap I had always been convinced I would not fall into. I had condemned Israel for defending itself.

Kol hakavod to Sugarman for this clear mea culpa.

However, my thoughts are not quite as forgiving. As a Jewish journalist who knows and loves Israel well, why did he not trust the IDF and the Israeli reports from the scene? Why was he only convinced when Hamas confessed?

It’s disgraceful how he immediately jumped to the wrong conclusion and saw fit to play into the hands of the antisemites.

After all the myriad of times that Israel has been unfairly condemned surely he of all people should have known better!

So yes, nice apology but too little too late. Next time he should keep his mouth shut and his keyboard locked till the full details emerge.

For his information and for anyone else looking to defend Israel and not worry about its moral character, here is the wonderful Col. Richard Kemp:

And here is his article in the Daily Telegraph this week:

The World is playing into the hands of Hamas. My article on Gaza violence in today’s Daily Telegraph. pic.twitter.com/meCR9JSltl

And here is Sky News Australia correspondent Andrew Bolt with a staunch defence fo Israel. What a refreshing change for Sky News! Then again, he is an Aussie, and it is well known that Australia is a staunch supporter of Israel:

I don’t think anything is going to change any time soon, which is pretty depressing. But we have to take heart from those who see the truth and defend us staunchly. And from those like Sugarman who see the error fo their ways and admit it in public.

13 Responses to More on anti-Israel media bias re Gaza, plus a mea culpa