I had some hesitation about posting a Good News Friday post today, what with the violent riots on the Gaza border and the terrible arson committed by the Palestinians against Israel, with fields and nature reserves burning down all over the south. But I came to the conclusion that we need some good news, if only to counter the depression that would otherwise settle over us.

With this in mind it is appropriate to post two items concerning the south.

A reforesting and re-greening campaign has been launched by Ofir Levstein, a resident fo Kfar Aza in the south. Called “They burn, we plant”, the campaign aims to replant trees in areas that have been burnt by incendiary kites flown by the maliciously destructive Palestinians:

Residents of Israeli communities surrounding the Gaza border will begin a massive tree-planting campaign this week in response to the destruction that has been caused by incendiary kites from Gaza.

The project is the initiative of Ofir Levstein from Kfar Aza, and Friday marks the beginning of the week-long campaign.

“The Sha’ar Hanegev [regional council] community, from all the neighborhoods, are invited to the tree-planting event this weekend,” Levinstein wrote in a post on Facebook.

“Families, farmers, the old and the young – everyone is invited… We’re taking responsibility and creating the reality. They burn and we plant,” he wrote.

He mentioned Nir Am, Erez, Nahal Oz, Kfar Aza and Miflasim as communities in need of restorative efforts.

Keren Kayemeth LeIsrael – Jewish National Fund (KKL-JNF) is joining the residents in the campaign and will supply thousands of tree seedlings to be distributed and planted by residents.

Since the start of the fire kite phenomenon, some 265 fires have been recorded, in which approximately 697 acres of KKL-JNF forests have burned.

There were at least nine fires ignited within 40 minutes in the Be’eri forest on Thursday.

Kol hakavod to Ofir Levstein on his fine initiative, and also to the KKL for joining in the efforts.

A similar idea has taken off (literally) in rocket-battered Sderot, where the residents have decided to take back the kites and remake them in their own image. Sherri Oz says “This is who we Israelis are”: (The article appeared originally in Hebrew on Rotter.Net and Sherri Oz translated it):

I cannot count how many times I have been told that Israel teaches its children to hate Arabs. And then the area that has seen more missiles, whether propelled by fuel or by wind, than any other place in Israel goes and does THIS (original Hebrew article):

Dozens of kites will fill the skies over the City of Sderot on Monday and will colour them with optimistic colours. Sderot Mayor Alon Davidi: “Our children are busy with positive activities; for us, these will be kites of life and not kites of death. We are also calling on the children of Gaza to play and not to be dragged into terrorist acts.”

On Monday, June 11, beginning at 5 pm, the City of Sderot, together with Mall 7 Shopping Center in Sderot, will be having a kite workshop (“Afifoniada” – kite is afifon in Hebrew) for the children of Sderot and nearby communities. During the event, children will hear stories, legends and interesting facts about the development of the kite. Afterward, each child will build his or her own kite, onto which they will write a personal message (such as: hope, renewal, building and security). At the end of the workshop, the children will fly the kites they made and create a spectacular “afifoniada” of positive messages.

“We are excited to be able to provide the children of our region with a kind of corrective experience,” said the Director of Mall 7 in Sderot, Assi Bergel-Uzan. “I am sure that the event will help change the current association the children have toward kites from something negative to something positive, as it should have been from the beginning.” “I want to thank the Sderot municipality for their quick participation in setting up the event and for proving to the children of Sderot that they are top priority,” added Marketing Director, Nofit Cohen. “I am sure that the cooperation between us for the sake of the children in the city will continue.”

Sderot Mayor, Alon Davidi: “In contrast with our neighbours in Gaza who turned the beautiful hobby of kiting into a terrorist act, with huge agricultural damages, the children of Sderot and the region are returning the kites to their original form – from making them to sending them soaring into the skies with the hope that they will not fall. We deal with positive acts and optimism and the wish that our children will always be happy. I call out to the children of Gaza to play with the kites that they make and not to be sucked up by agents of terror – for us these are kites of life and not of death.”

It wasn’t always like this in Gaza as Sherri writes:

4 years ago the children of #Gaza set the GWR by flying the most #kites simultaneously. #Play is a #children #right pic.twitter.com/iTrspsfufr

And now we have this; 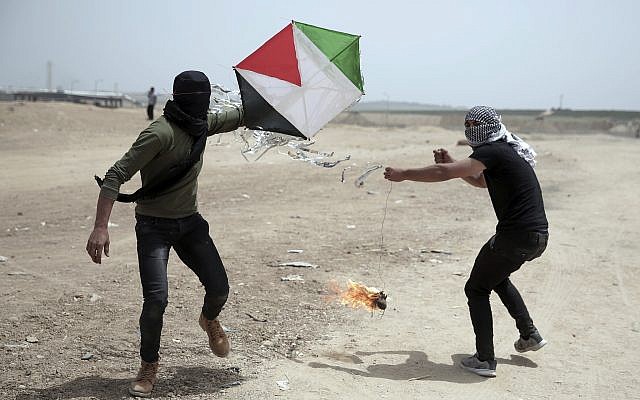 A huge kol hakavod to Sderot for taking back the kite from the arsonists of Gaza. I’m sure it will provide psychological healing for traumatised children as well simple good fun to participate in a kite festival.

But I just wish Israel would go on the offensive for once, and not always be in a position of defence and reaction. But that’s for another blog.

Meanwhile on the diplomatic front, Israel is enjoying some popularity in New Zealand, not known for its ultra-friendly position to Israel. John McCormick, Chairman of the Hawkes Bay Friends of Israel, sent me several updates about the Israeli Ambassador’s latest meetings:

​The Embassy of Israel in New Zealand had quite the busy week last week! Led by Ambassador to New Zealand Dr Itzhak Gerberg, a delegation from the embassy traveled to Hawke’s Bay and met with some local businesses, attended several receptions, gave a radio interview and even had the chance to meet with the Mayor of Central Hawke’s Bay.

In a bid to meet some “real Kiwis” and boost relations and trade, the journey began with a stop-off at Vet Services and a meeting with GM Richard Hilson. A radio interview with Hawke’s Bay Central FM meant a lively discussion about the Middle East, New Zealand attitudes towards the region and the prospects for peace.

A reception, organized by Hawke’s Bay Friends of Israel Chairman Mr. John McCormick, took place that evening. The event featured a wonderful performance by world-class Israeli Cellist Inbal Megiddo. The following day, the Ambassador met with the Mayor of Hawke’s Bay Alexandra Walker to discuss water management and water system design before a speech at the Institute of International Affairs at the Havelock North club.

That evening brought about another reception for the celebration of Israeli’s 70th Independence Day with Pastor Nigel Woodley and the Flaxmere Christian Fellowship in Hastings. The lovely event featured a brilliant rendition of the Israeli National Anthem “Hatikva” played on a bagpipe.

Kol hakavod to all the Kiwis at Hawkes Bay for organizing this wonderful event, and of course huge thanks from us in Israel for their constant and loyal support of Israel.

John also sent me this fantastic video of an indigenous Maori who explains why he is a Zionist. He makes it all sound so simple and logical – and it is! (As long as you are not blighted by bigotry):

What a wonderful man! Thank you for your courageous stand and for your staunch support.

Talking of supporting Israel, here is a really cute initiative – a Guinness record for the biggest Israel flag created out of … cookies!

And one last item before I close. This very clever 11th grader, son of my friend Hannah Katsman, built this brilliant robot that solves Rubik’s cube!

With the young generation of this young man and his friends, Israel has a very bright future!

On this happy note, I wish the residents of the south – and all of Israel – a safe, quiet and peaceful Shabbat.