The violation of Israeli human rights by arson and missiles, and the silence of the international media

While the HRC and the international media are concerning themselves with the self-imposed plight of the Palestinians, particularly in Gaza, it has shown no sympathy for Israeli human rights which are violated daily in the South (as well as elsewhere throughout Israel, but that’s another story). Listen to this resident of the South describing what it’s like living under rocket fire:

(If the video doesn’t show, click this link instead).

Overnight, 45 rockets were launched toward Israeli territory. Civilians in southern Israel have 15 seconds to get to shelter in time. Would you make it? pic.twitter.com/3eXQP6YwjV

Besides the non-stop rockets and mortars every night (on previous nights 20-30 missiles have been fired), Gaza terrorists have been sending over innocent-looking kites, balloons and even condoms (!) tied to incendiary devices which have set fire to thousands of dunams of Israeli fields, forests and nature reserves. The destruction has been devastating.

One of these incendiary balloons landed in a resident’s back garden on the kids’ trampoline:

A cluster of balloons carrying a small explosive device that was launched at Israel from the Gaza Strip landed in a nearby community on Wednesday, getting stuck on a backyard trampoline. 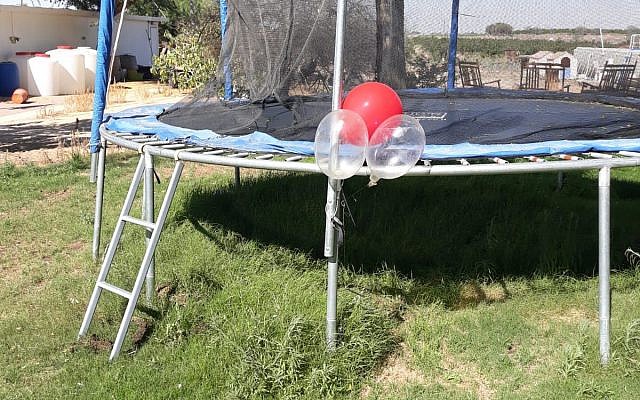 A cluster of balloons with a small explosive device attached to them, which landed and got stuck on a trampoline in a backyard in the Eshkol region of southern Israel on June 20, 2018. (Eshkol Security)

“Balloons on a trampoline in the backyard — that’s a decorative play area and beckons the most innocent ones, and yet our children have lost their innocence because of this phenomenon,” said Meirav Vidal, whose house it was.

“These days it’s important to explain to kids that balloons are also a ‘suspicious object’ that they have to keep away from, to not touch and to call an adult,” Vidal said.

She said her daughter had gotten the message: “Like my seven-year-old says: ‘Balloons that we don’t recognize are suspicious.’”

The balloons that got stuck on the trampoline were one of at least three sets that landed in the Eshkol region on Wednesday.

A second cluster of balloons got stuck in a tree in another backyard, and the third bunch landed in an agricultural field, a spokesperson for the region said. 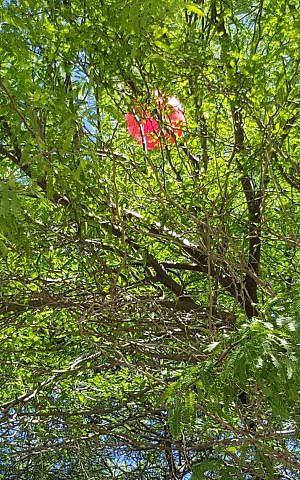 In all three cases, small explosives were attached to the balloons by a string, the official said.

It is so incredibly sad that children have to be warned against touching balloons and kites! But I bet you don’t hear of these attacks in the international media. In fact even the rockets and mortars have hardly been reported. See this report from BBC Watch on how the BBC minimised or even ignored these attacks. It is outrageous!

Not only the BBC is guilty of such one-sided reporting as Edgar Davidson reports (screenshot in case you can’t see the facebook post. Click to enlarge):

In order to understand the level of ecological devastation just watch this very sad video:

The Green Prophet, an ecology-focused website, describes the eco-disaster caused by Gaza that nobody is talking about:

Molotov cocktails and chemical bombs tied to kites and helium-filled balloons have been launched from inside Gaza for the past 78 days. The fire bombs ignite when they land on the Israeli side of the border. Low-tech tactics, but they work. As of this writing, 412 fires have blazed in Israeli farm fields and conservation areas. Over 17,500 dunams (4,300 acres) lie scorched to the ground, at least 10,000 dunams (2,471 acres) of which are parks and nature reserves. At least one-third of Israel’s land along the Gaza periphery has suffered extensive damage. Financial damage to Israel’s agriculture already stands at $1.4 million. Food crops that could have fed thousands; irrigation equipment, and farmers’ livelihoods, have gone up in smoke. In the past 24 hours alone, 17 fires have broken out in the Gaza envelope. Hundreds of turkeys in Kibbutz Ein Hashlosha have choked to death, filling the air with the stench of burnt flesh.

But eco-terrorism isn’t limited to burnt turkey runs, wheat fields, and avocado groves. The pasture that Beduin communities depend on to feed their freely roaming flocks now offers nothing to hungry sheep and goats but ashes.

Eucalyptus, pine, and mesquite forests, each tree planted by hand fifty years ago in the Gaza periphery, are now but blackened stumps. Slow-moving reptiles and mammals trapped in the fires die horribly.

Over 40 beehives have perished in flames near Tel Gama. That means 40 fewer bee colonies to pollinate crops on both sides.

The helium that keeps fire-carrying balloons floating far into Israeli land has been siphoned off Gazan hospital supplies, depriving the struggling medical system there of yet another precious resource. What will be the toll on human health?

Read it all and weep. And then write to your local and international media outlets and demand that they cover this damage. Contact your politicians and request that they demand accountability and reparation from the Palestinians.

And for us Israelis – we should be out protesting, writing, demonstrating, demanding of the government and the IDF to stop reacting, and to start pro-acting: take pre-emptive action, use intelligence, whatever it takes, to stop this terrorist arson, and to bring quiet back to the South.

You can be sure that if one incendiary kite or one mortar fell on Tel Aviv or Jerusalem all hell would have broken out immediately and the perpetrators would have been bombed to smithereens. But because it’ ‘only” the south, whose residents are obviously considered second class, the authorities feel free to accept this “low-level” violence.

Ignoring the elephant in the room though is not going to bring quiet. Ignoring the arson only emboldens Hamas. Responding to their attacks with air strikes on empty buildings and empty cars of Hamas leaders brings more rocket fire.

Eventually these “silly toys” of terror are going to bring about a war, just as similar actions spiralled out of control in 2009, 2012, 2014 and will no doubt happen again in the foreseeable future.

For over two months, Palestinians in the Gaza Strip have been flying kites, birthday balloons and inflated latex condoms into Israel, relying on the gentle Mediterranean coastal breeze to push them across the border.

Silly as they may sound, these weapons are no joke.

Most of them carry metal mesh pouches containing a burning piece of coal or oil-soaked rag, which have sparked hundreds of fires in southern Israel, destroying thousands of acres of land and causing millions of shekels in damage.

Often, a single balloon is flown over the border, bearing an incendiary device or small explosive. However, there have also been cases of multiple balloons being tied together in order to carry larger and heavier payloads. 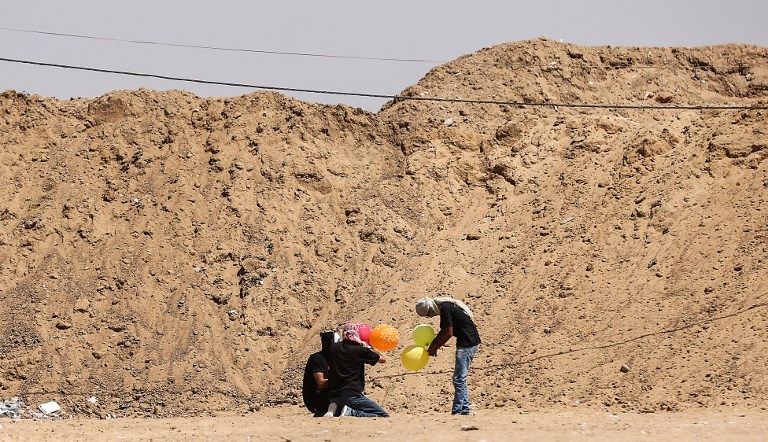 Gazans load balloons with flammable material to be flown toward Israel, at the Israel-Gaza border in al-Bureij, central Gaza Strip on June 14, 2018. (AFP/Mahmud Hams)

These dead simple and dirt cheap methods have presented a significant challenge to the mighty Israel Defense Forces.

The military has used drones and other high-tech solutions to some positive effect, but every day the kites and balloons keep coming.

The Defense Ministry has also threatened to limit the supply of helium into the Gaza Strip, which is supposed to be used to help run magnetic resonance imaging (MRI) machines.

Recently, the army has turned to deterrence — not stopping the airborne devices themselves, but trying to get the Palestinians to stop launching them.

Over the past two weeks, the IDF has started firing warning shots at the kite- and balloon-flyers and at the tents and cars they use.

After this tactic failed to yield results, the army shifted its focus to the Hamas terror group, which rules Gaza.

The military does not believe that Hamas is behind all of these kites and balloons, but says the terrorist group supports the practice and certainly is not working to prevent it.

“It might have started spontaneously, but as Hamas saw the damage caused on the Israeli side, it has taken this offensive effort under its control and actively promotes it,” he said.

On Monday and Wednesday, the Israeli Air Force conducted a series of predawn airstrikes on Hamas positions in the coastal enclave in an attempt to get the terrorist group to persuade Gazans to abandon the practice.

Terrorist groups in the Strip immediately responded to the early morning airstrikes on Monday by firing three rockets at southern Israel, though the rest of the day indeed saw a decrease in the number of arson devices flown into Israel. However, Palestinians were back at it again the next day.

And Wednesday’s predawn strikes by the IDF met an even more forceful response, with Hamas and other Gaza-based groups launching almost 50 rockets and mortar shells at southern Israel.

The politicians started weighing in on the situation, with some justification:

Former IDF general Yoav Galant, who is ordinarily more hawkish, spoke out against shooting the kite-flyers, many of whom are young.

“A lack of experience in the use of force can lead to the intoxication of power. It is a very serious mistake to shoot at an eight-year-old child, certainly in a deliberate manner,” Housing Minister Galant, a member of Kulanu and a former IDF Southern Command chief, told the Ynet news site.

No more talking. The time for action is now. I’m sure the army and government have action plans ready in their desk drawers. Get them out and take action!

8 Responses to The violation of Israeli human rights by arson and missiles, and the silence of the international media