Prince William’s visit, the first ever Royal visit to Israel

Prince William’s visit to Israel and the Palestinian territories, the first ever Royal visit to Israel, concluded today, and in general it seems to have gone down a treat with the natives (myself included). The Prince has inherited the common touch from his late mother Princess Diana and he appeared to enjoy his time mucking about on the beach in Tel Aviv (where was his sunhat though??) or meeting Arab and Israeli youngsters on the football pitch or learning about Israel’s hi-tech scene. 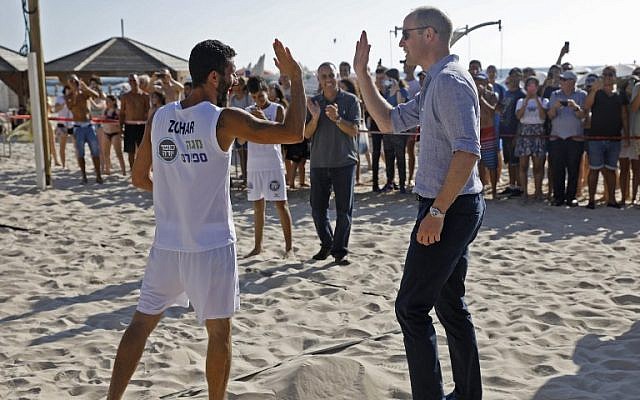 Raphael Ahren in the Times of Israel writes about the Royal gain and pain:along with the PR coup for Israel:

As British officials had stressed countless times before the Duke of Cambridge’s arrival in the region earlier this week, his historic visit here was intended to celebrate the UK’s bilateral ties with Jordan, Israel and the Palestinian Authority, but otherwise remain strictly apolitical.

He would not recognize a Palestinian state or apologize for the Balfour Declaration, they predicted, but nor would he do anything that could be interpreted as recognizing Israeli sovereignty over any part of Jerusalem. 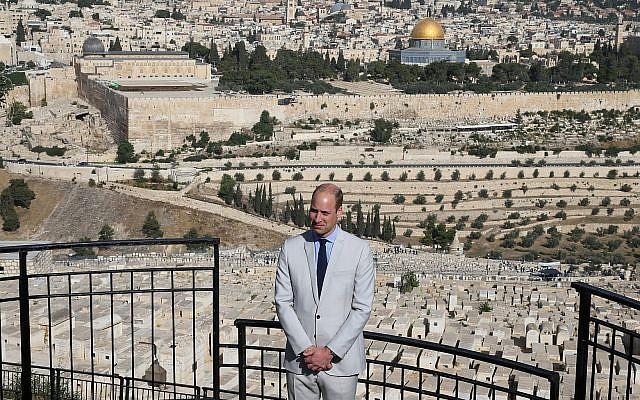 Prince William on the Mount of Olives where his great-grandmother, Princess Alice, a Righteous Amongst the Nations, is buried

Nonetheless, the future king’s visit was highly significant for Israel, despite a few nuisances along the way.

The importance of his tour lies mainly in the fact that a member of the royal family, after seven decades of unofficial boycott, finally came on an official visit to the State of Israel.

It’s a harsh blow to those who seek to delegitimize the State of Israel when Great Britain — which not only abstained on the 1947 United Nations Partition Plan but also repeatedly refused to vote in favor of Israel’s joining the UN, only recognizing the nascent Jewish state in April 1950 — finally sent a representative of Her Majesty to Jerusalem for meetings with Israel’s most senior leaders.

Supporters of the anti-Israel Boycott, Divestment and Sanctions movement must have scratched their heads, furthermore, upon learning that the second-in-line to the British throne had opted to stay at Jerusalem’s King David Hotel, which Jewish underground fighters bombed in 1946, killing scores of British soldiers.

And that’s the thorn in Israel’s side, the minor royal pain that accompanied the gain: Those parts of the prince’s visit that took place beyond the 1967 lines, including those in East Jerusalem, were not organized by the British embassy in Tel Aviv but took place under the auspices of the country’s Jerusalem consulate, which is located in the Sheikh Jarrah neighborhood in the city’s eastern section.

His speech in Tel Aviv was particularly warm and was very well received in Israel:

Of course he had the obligatory meetings with politicians on both side of the divide which he carried off perfectly, and also navigated the religious and political minefield of a visit to the Old City of Jerusalem without causing any major offence to either side, for which he deserves at the very least a medal of valor from his grandma, Her Majesty Queen Elizabeth. 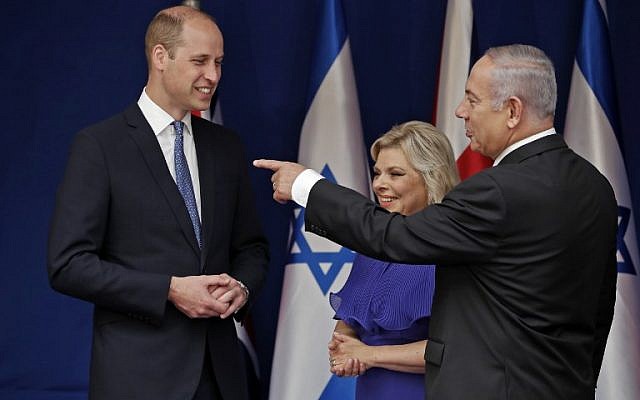 Here is a short clip of Prince William at the Kotel, accompanied by both Rabbi Shmuel Rabinovitz, the Rabbi of the Kotel, and British Chief Rabbi Efraim Mirvis:

There were a couple of off-notes however – how could there not be?

The Duke of Cambridge also visited the tomb of his great-grandmother, Princess Alice of Battenberg and a Mount of Olives observation point. Due to diplomatic sensitivities, they were classified as “private visits.” The Jewish Chronicle live-blogged the day.

Unfortunately, during his visit to Ramallah to meet with the Palestinian leadership, there were things that the Palestinians did not want him to hear, as Bassam Tawil writes in the Gatestone Institute:

If there were any complaints about his visit to Israel – and there were many, including from myself – they should be addressed to the Camel Corps, c/o the Foreign Office, Whitehall.

The Foreign Office seemed determined both to forget that the Mandate ended 70 years ago, and that no country besides Pakistan and Britain itself recognized the Jordanian occupation of Jerusalem, Judea, Samaria and Gaza. That is how they could claim that Prince William would be visiting “Occupied Palestinian Territory” when he went to the Old City.

It sounds very Alice in Wonderland-ish to me. “When I use a word,” Humpty Dumpty said, in rather a scornful tone, “it means just what I choose it to mean- neither more nor less.”

Caroline Glick was also concerned about Prince William’s problematic visit to Israel, asserting that despite claims to the contrary the royal visit was indeed politicized, by the British Foreign Office itself:

Instead, Yediot reported, Kensington Palace has insisted that William’s visit to Jerusalem is part of his official visit to the Palestinian Authority (and what it calls the “Occupied Palestinian Territories”). That is, rather than finesse Britain’s position on the most explosive issue in the Arab conflict with Israel, Britain decided to use Prince William’s visit to do what no government, other than Pakistan, ever did: claim, in an official act, that these sections of Jerusalem belong to the Arabs, not the Jews.

Kensington Palace is presenting William’s visit as nonpolitical. But the opposite is the case. According to the itinerary published in Yediot, almost every aspect of William’s visit, except for his meetings with Prime Minister Benjamin Netanyahu, Israeli President Reuven Rivlin, and Israel’s Holocaust memorial Yad Vashem are political.

His trip is supposed to be resolutely apolitical. Fat chance! His own itinerary released by his Kensington Palace office has already raised eyebrows.

After visiting Jordan and Israel, it says he will spend time in “the Occupied Palestinian Territories” – the FCO’s term – within which he will be briefed on Jerusalem’s Old City and the Mount of Olives.

Worse still, according to some unofficial reports, part of his trip to the “Occupied Palestinian Territories” will include visits to the Western Wall and Temple Mount.

This appears to be an all-too political FCO insult. For it goes even further than Britain’s still-obdurate refusal to accept that any part of Jerusalem is within Israel. It implies that the Old City, the place at the very heart of the Jews’ ancient national kingdom and including the holiest sites in Judaism, instead rightfully belongs to the “Palestinians” and is illegitimately “occupied” by Israel.

However Roger Boyes of the London Times claimed that the Prince’s visit was actually a snub to the Camel Corps. Because the link is behind a paywall, I bring you the text courtesy of Sussex Friends of Israel and I will quote a few highlights:

A shift in geopolitics has made the visit possible — and a cultural change in the Foreign Office, which has for many decades advised the royal household that it is better to don the appropriate headgear and butter up Arab autocrats than engage with the gritty detail of the Israeli-Palestinian relationship. The fear of giving offence to princelings has been the defining trait of the so-called camel corps of Britain’s Arab enthusiasts within the Foreign Office. It has, with flanking assistance from oil men and aerospace executives, become an almost institutional lobby that sees Israel as the troublemaker of the region and Arab leaders as being deeply misunderstood.

The result: a skewed view of the Middle East that has left Britain so often wrong-footed by an unexpected crisis; a war, a revolution, a putsch that others had spotted in the making. Saddam Hussein’s invasion of Kuwait? Didn’t see it coming. The 2011 Arab Spring? A complete surprise.

For a long time I bought into the mystique of Britain’s Arabist expertise, and saw Israel’s concern about the camel corps simply as irrational suspicion of London’s motives dating back to the days of the Mandate. Did we not have plenty of informal contacts with Israel, a lively exchange of intelligence about its hostile neighbours, about the Soviet bloc and even about fugitive Nazis? And as for the royal family, they came often enough to Israel on private visits. Both Prince Philip and Prince Charles have been to visit the grave of Princess Alice on the Mount of Olives in Jerusalem, honoured for her role in hiding a Jewish family in German-occupied Athens. William too will pay tribute to his great-grandmother.

There’s no mistaking the anger simmering among Britain’s Arabists. Donald Trump’s relocation of the US embassy to Jerusalem, the support for Israeli settlements, the strength of the connection between Bibi Netanyahu and the president: all this turned their world upside down. The fact is the caravan has moved on. The Sunni Gulf Arabs share a common enemy with Israel: Iran. And the Palestinians are becoming a source of irritation for many Arab governments rather than a holy cause. When Israeli soldiers opened fire on Hamas-inspired protesters at the Gaza-Israel border wall last month, there was some official Arab grumbling but no serious political bust-up. The threat of Iran has become the overriding threat and Hamas receives Iranian support.

This has left Britain out of step. It sticks with European Union support for the Iran nuclear deal which, since the US withdrawal, is already dead in the water. Like the rest of the EU, it will keep its embassy in Tel Aviv rather than Jerusalem. These positions will have to yield to new realities. And the camel corps will have to adapt or be put out to pasture.

Read the whole article for it provides a fascinating history of the Foreign Office’s training of its spies in the Middle East and how that skewed their view of Israel and the region.

Today we bid farewell to Prince William, while he enthused that he had received a real feel for Israel:

[UK Ambassador David] Quarrey told Hadashot news that the prince had two goals for his trip to the Jewish state — to pay respect to the victims of the Holocaust, and to meet the country’s young people to hear from them their goals and aspirations for the future.

The ambassador said William enjoyed being able to walk around the streets and meet the people of Israel. He told Hadashot that the prince had stressed he didn’t want to spend time in meetings but wanted to get out and get a real feel for the country.

Listen to the control tower at Ben Gurion Airport wishing the Prince farewell:

I must admit that I was a reluctant fan of the royal visit at first. I thought it was going to be too politicized by the Foreign Office and too grudging of respect for Israel. But I admit I was wrong, and was pleasantly surprised by the way the visit was handled. This was partly due to excellent planning and a lot to do with the Prince’s pleasant character and charming manner. He is a great goodwill ambassador for Britain and was an excellent choice for the first ever Royal visit, if the Queen herself could not come.

Goodbye Prince William and farewell. I wish you a safe journey home. May this visit mark the start of a renewed friendship between our countries, and I hope you have taken with you Israel’s message of hope for peace and friendship back to Britain and especially to the Camel Corps back in Whitehall.

5 Responses to Prince William’s visit, the first ever Royal visit to Israel