Let’s start with some very important good news from the northern border where Israel’s humanitarian Good Neighbour project has gone into overdrive with the influx fo tens of thousands of Syrian refugees massing on the border as the Daraa region comes under intense air strikes:

Two Syrian adults and four Syrian children wounded in bombings in their home country were brought into Israel for medical treatment on June 29 as part of a unique and complex medical operation run by the 210th Division of the Israel Defense Forces.

The four wounded children, aged six to 14, were orphaned as their parents were killed in the attacks, according to Syrian news reports. 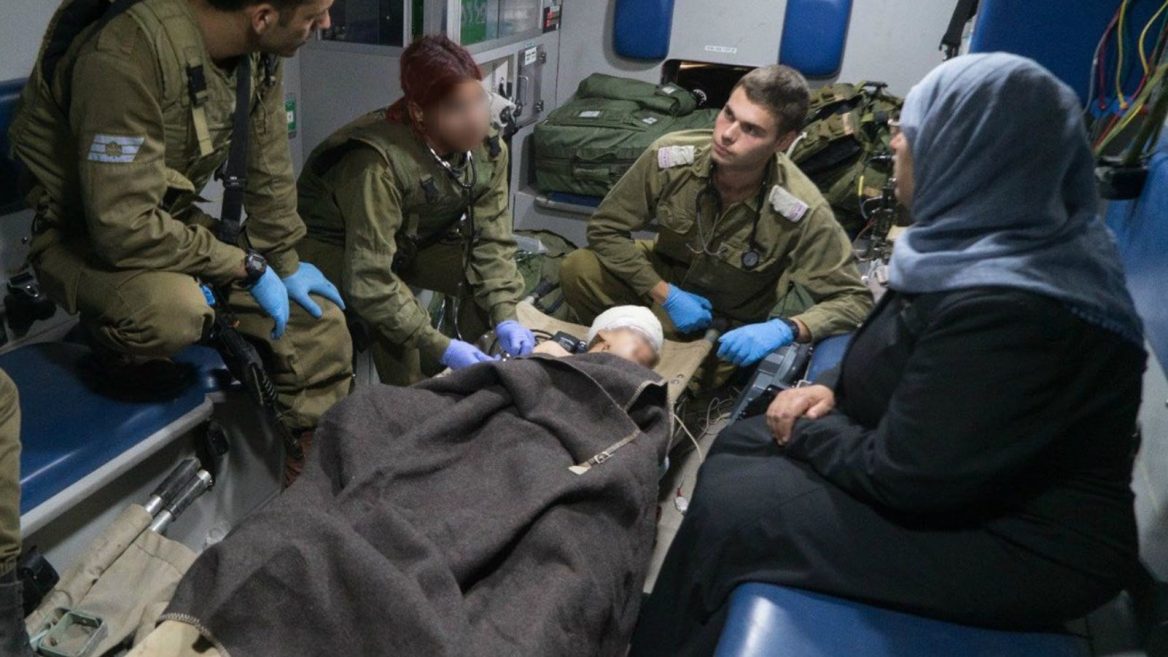 In addition, the Israelis sent 300 tents, 13 tons of food, 15 tons of baby food, three pallets of medical supplies, and 30 tons of clothes and shoes overnight to tens of thousands of Syrian civilians fleeing Bashar Assad’s latest offensive against rebel holdouts in the Daraa region of southwest Syria.

After being alerted at night, IDF medical troops from the Northern Command arrived at the Israeli-Syrian border in the southern Golan Heights. The troops treated the injured Syrians at the border before transferring them to a hospital in northern Israel for further medical treatment.

The Mazor Ladach (literally, Bandaging Those in Need) field clinic, established by the IDF and international aid organizations in the southern Golan Heights, has provided medical treatment to approximately 6,000 civilians since its opening in August last year. The IDF also equipped a new maternity hospital inside Syria.

Most of these supplies have been donated by nonprofit organizations such as Amaliah and some by the Israeli government.

Kol hakavod to the IDF and all the Israeli NGOs which are funding and supplying the field hospitals. Show me another country which would provide such aid and succor to the enemy’s civilians. Those who hate us are completely blind to our humanitarian aid, which is not done for kudos but for simple altruism.

But the refugees themselves are very grateful for Israel’s help:

The support Israel has provided for Syrian refugees has not gone unnoticed or unappreciated, one refugee claims, telling Yediot Ahronot that he and his fellow refugees view Israel’s actions as “very noble”.

“We saw a very noble stance by the Israeli side, both by the aid that it sent and in its treating of the wounded,” the refugee, named Said, told Yediot.

Said added that many Syrian refugees hoped that Israel would be able to convince other countries, including Jordan, to open their borders to those seeking asylum.

“We hope that Israel will exert pressure on the regional states to open their borders for us.”

Said contrasted Israel’s support of Syrian refugees with Jordan’s treatment of those gathered on its border.

“When we got to the border with Jordan we waited for a few hours. The Jordanians stood opposite us and saw us. At a certain point they sent a drone to learn about the field and a Syrian ambulance entered Jordanian territory in order to treat an elderly woman. But apart from the ambulance, Jordan did not allow us access to any kind of aid.”

All I can say is I am so proud of our crazy little country!

Rescuers working to save a Thai youth soccer team trapped deep inside a flooded cave are using an Israeli technology to maintain communication with the 12 boys and their coach.

Maxtech Networks told The Times of Israel Thursday that its system is providing a voice, data, and video link to the boys who have been stuck in the cave for nearly two weeks, and were only located earlier this week.

The boys, aged 11 to 16, and their 25-year-old coach entered the sprawling Tham Luang Nang Non cave in the northern province of Chiang Rai after a soccer game on June 23. They were found by two British rescue divers on July 2, nine days after they disappeared. 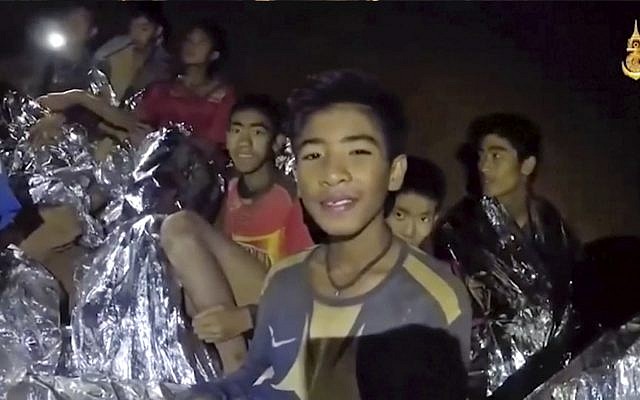 In the Israeli system, a string of small devices, similar to handheld radios, pass wireless communications between each other, enabling a link in places regular radios won’t work, such as where there are major obstacles blocking the line-of-sight between the two ends of the line.

“It is like a daisy-chain,” explained Uzi Hanuni, CEO of Maxtech.

It took 19 of the devices to complete the link to the boys in the cave. They have enough battery power for 10 hours’ use at a time.

Unfortunately it doesn’t look like the actual rescue will happen any time soon, but at least now there is a line of communication with the boys. Let us pray for their safe return very soon!

Moving back home, locals responded with huge generosity to a Maaleh Adumim handicapped child whose parents were worried no one would turn up to his birthday party. Well, was he in for a surprise! Hundreds of children and parents turned up!

The parents of six-year-old Matanel were worried. They were worried that as a child with special needs who is unable to attend school, no children would come to his birthday party on Monday.

But the Yehoshua family received the best surprise humanity could offer.

Not only did hundreds of children and parents from Ma’aleh Adumim come and celebrate with little Matanel, but they were joined by a bus full of Border Police officers and the city’s mayor, Benny Kashriel.

Several videos and photos of the party circulating on social media show a park swarming with children, entertainers, balloons and food stalls – most of which was donated by the community. One video showed a large group of children singing “happy birthday,” giving Matanel balloons and dancing happily around the wheelchair-bound child.

Several people who attended the party said it was incredible to see the turnout.

Atara Singer Charnowitz, who attended the party and posted her experience on Facebook, said her heart literally stopped when she saw the turnout. “Not only that. The mayor pulls in, everyone’s dancing with him and singing to him bringing him balloons! There was a table piled with gifts!!! I just can’t believe we live in a country where things like his happen.

Where people go out of their way to celebrate [the birthday of] a little boy whom they do not know at all.”

Her post received more than 300 likes and 92 shares by Tuesday afternoon, with several people saying “this is the kind of post that should go viral.”

Kashriel also posted a video of the party to his Facebook page, saying this had been “one of the most exciting moments in my life as mayor – a whole community mobilized, united and focused on one goal: to make the six-year-old Matanel happy on his birthday!” While speaking at the party, the mayor told the people how they had “proven [again] how wonderful and united you are.”

He thanked all the donors, the women’s forum, the business owners, the organizers, the Border Police, “the many residents who arrived with their children as well as everyone else who came so that the dear Matanel would celebrate as he deserved.

“We wish Matanel strong health, happiness and many more moments of joy and love as he has experienced today,” he added.

Here is the video from Mayor Benny Kashriel’s facebook page:

What a fantastic response to a little boy who only wanted a nice birthday. Kol hakavod to all the participants and donors and to the Mayor and officials of Maale Adumim! Happy birthday Matanel!

What better way to toast the birthday boy than with some non-alcoholic wine! The Golan Heights Winery has produced wine-flavoured water – just like fruit-flavoured water but with wine (via Hadassah):

The story in short is that all wineries are left with pulp and seeds etc. which are mostly sent off to compost or to feed animals. But the Golan Heights Winery decided to see if they could use this product in some edible manner, and thus they created O. Vine wine-flavoured water.

It turns out that this method is both modern and very ancient. In Talmudic times, the poor people who could not afford wine would drink such a substance.

The Facebook poster, whose father is a representative of Golan Heights Winery, reports that in a recent exhibition their booth was one of the most popular amongst the thousands of other booths. There was particular interest from Arab nations who of course do not drink alcohol.

As the post says – Israeli innovation and a blow to BDS. What better combination! 🙂

You can read some of the story in English here (via DebbyZ): Sustainable start-up O. Vine launches non-alcoholic wine-water.

Kol hakavod to those experts and dreamers who came up with this delicious sounding drink.

I’ll drink Le’chaim to that!

And on that happy note I wish you all Shabbat Shalom!