Reams of paper and countless megabytes of bandwidth have been expended on Labour’s outrageous redefinition of antisemitism, which it rewrote simply to suit itself and to excuse its own members (including its very own Dear Leader Corbyn) from accusations of antisemitism.

Here are a few more items on this subject, describing the outrage which greeted Labour’s new guidelines, and their practical effects:

It seems that Labour under Corbyn have ushered in the Messianic era because no less than 68 British Rabbis joined together to sign a letter condemning Labour’s move. (If you understand the axiom “Two Jews, three opinions) then you’ll understand the miraculousness of 68 Rabbis agreeing on anything!).:

A group of 68 British rabbis from across the denominational spectrum have signed an unprecedented letter urging Labour “to listen to the Jewish community” and adopt the full International Holocaust Remembrance Alliance (IHRA) definition of antisemitism.

In a sign of how frustrated British Jews have become with Jeremy Corbyn’s Labour, Orthodox rabbis joined the senior UK rabbis of Reform, Masorti and Liberal Judaism to “speak out with one Jewish voice” because “antisemitism within sections of the Labour party has become so severe and widespread”.

Among the Orthodox rabbis is Rabbi Avrohom Pinter, from the Charedi community.

One of the most unprecedented reactions to Labour’s redefinition of antisemitism came from veteran Labour MP and former Minister Dame Margaret Hodge who called Corbyn “an f**ing antisemite and racist”:

A Jewish MP who called Jeremy Corbyn a ‘f***ing anti-Semite and racist’ has doubled down on her words explaining that her grandparents were murdered by Hitler during the Holocaust and she would not abide the same hatred in her own party. 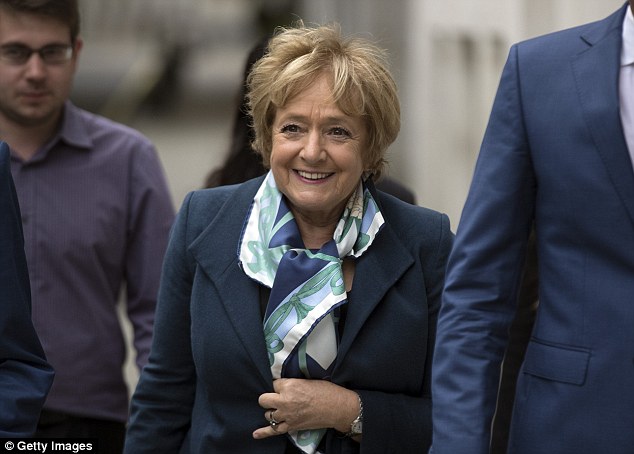 Dame Margaret Hodge accused the Labour leader of standing by and allowing the party to be infected by anti-Semitism and reiterated her desire to fight it.

In a moving article in The Guardian, Dame Margaret issued an emotional defence of her attack on Mr Corbyn hours after his office said she would be disciplined for the attack.

She wrote:  ‘Under his leadership the Labour party is perceived by most Jews, thousands of party members and millions of members of the public as an anti-Semitic, and therefore racist, party.

‘As our leader, he is now perceived by many as an anti-Semite.’

She added: ‘I am a Jew. My grandmother and my uncle were murdered by Hitler and many cousins and other relatives were slaughtered in the gas chambers.

Indeed, my grandfather was one of six siblings; we are the only surviving line left and that was because my parents were in Egypt when the war broke out.

‘I joined the Labour party to fight racism. In the 1960s the Labour party was the natural home for Jews. To find myself 50 years later, in 2018, confronting antisemitism in my own party is completely and utterly awful.’

Labour’s reaction to Margaret Hodge’s outburst compounded their offence. Instead of apologizing or trying to explain, they announced that “action will be taken” against her. How menacing!

A spokesperson indicated disciplinary measures would be taken against veteran MP Dame Margaret Hodge over her “unacceptable” comments, which came after the British opposition party adopted a definition of anti-Semitism that was slammed by Jewish leaders as unacceptably soft.

“Under the terms of PLP [parliamentary Labour party] rules, behavior has to be respectful between colleagues and not bring the party into disrepute,” a Labour official was quoted by The Guardian as saying. “The behavior was clearly unacceptable between colleagues. Jeremy’s door is always open to discussions with members of the PLP. Action will be taken.”

Another Labour MP, John Woodcock quit the party in disgust, saying he will remain in Parliament as an Independent.

Labour MP John Woodcock, a prominent critic of party leader Jeremy Corbyn, on Wednesday announced he would resign from the British opposition party over what he described as its “tolerance” of anti-Semitism. 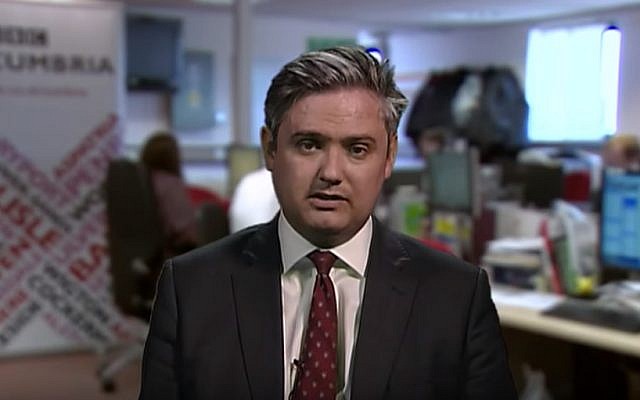 In his resignation letter, Woodcock said the party has been “taken over by the hard left” and has “tolerated” anti-Semitism.

“Anti-Semitism is being tolerated and Labour has been taken over at nearly every level by the hard left, far beyond the dominance they achieved at the height of 1980s militancy,” he wrote.

He also said Corbyn “would pose a clear risk to UK national security as prime minister.”

Matters have come to such a head that Spectator columnist Stephen Daisley, in a hard-hitting article, wrote that Labour members must pick a side in the fight against antisemitism:

For over a year now, I have contended that Labour is institutionally anti-Semitic. Yet even among those members who agree, the response is one of indignation when I suggest that people who are anti-racist have no business
funding and campaigning for an apparently racist organisation. All of them say more or less the same thing: I won’t walk away. I’m staying to fight. We can change the party from within.

What follows does not come easy but none of this is easy. Labour members who insisted on ‘staying to fight’ Corbynism and anti-Semitism at first evoked sympathy for their loyalty to their party and the pathos of their situation. Then at the General Election, they lined up behind Corbyn and campaigned to make him Prime Minister. Those who have so often accused their leader of failing to match words and deeds were now guilty of the same.

For those who remain, Labour is in the blood and in the soul. However much they despair at what it has become, they cannot bring themselves to a separation that would feel like an amputation. That is a damnable situation to find yourself in but it does not deprive you of moral reasoning or excuse your failure to act upon it. Whatever makes you stay, you have – in most cases unconsciously – made the same calculation: that you love the Labour Party more than you hate anti-Semitism.

David Hirsh at Engage explains the problem with Labour’s redefinition of antisemitism:

The biggest specific problem with Labour’s homemade definition is that it declares that hostility to Israel could only be antisemitic if motivated by antisemitic intent. This is a radical break from everything which is accepted in the scholarly study of racism and in antiracist practice.

… The kind of antisemitism which is now legitimate in the Labour Party is pushed and defended by people who think of themselves as opponents of antisemitism. They have no antisemitic intent and so would not be found antisemitic by a tribunal using the homemade definition. Yet they still ostracize those who oppose antisemitism and they are responsible for a culture which nurtures and licenses antisemitic ways of thinking.

You could not even prove that Ken Livingstone himself is motivated by antisemitic intent. He probably isn’t.

The refusal of the Party to accept the IHRA definition is symbolic of its refusal to oppose left antisemitism. Today’s Labour Party is led by people who embrace political antisemitism. Their politics on this issue comes from the Soviet Union, from Durban and from the Iranian regime for whom Jeremy Corbyn worked as a propagandist. He did not mis-speak when he claimed that his friends in Hamas and Hezbollah were dedicated to peace and justice; that is his worldview and has been for decades. Corbyn isn’t going to endorse a definition of antisemitism which may influence people to judge his political friends to be antisemitc.

And as if to demonstrate exactly what Labour’s new self-defined antisemitism looks like, here is LBC broadcaster Ian Dale confronting a real-life antisemite. Just listen to the caller’s words:

The commenter below (proud to say he is my cousin’s son) describes exactly what is wrong with the caller’s words. Would they be considered antisemitic under Labour’s new guidelines? One can’t help but wonder:

To correct Ron’s assertion that Ashkenazi Jews are not of Jewish origin, there are multiple subcultures within Judaism, of which most Jewish people belong to the Ashkanazic and Sefardic subsections. There are further subsections such as Yemenite Jews, Ethiopian Jews and Adoni Jews to name a few. The difference between these subsections are country and region of origin, differences in beliefs, etc. To state that Ashkanazic Jews are not Jews or part of the Jewish religion is anti-Semetic, racist and downright ignorant.

British Jews are once again holding a protest against Labour antisemitism. If you are in London and can spare the time, please join in and show your support:

The National Executive Committee (NEC) of the Labour Party has responded to the Jewish community and its own MPs‘ demands that it accept the International Definition of Antisemitism by adopting its own rewritten definition of antisemitism.

The Jewish community has been consistent and clear in demanding that the Labour Party follow the Government, police, other political parties and even its own MPs in adopting the International Definition of Antisemitism. Now the NEC has crossed the Rubicon and defiantly adopted its own deeply inadequate definition.

We have long stated that the Labour Party under Jeremy Corbyn is institutionally antisemitic and unsafe for Jews. We have watched as brave activists fought from within Labour to save their political home from the clutches of antisemitism. The anti-racist Labour Party of old is now dead and gone.

Labour’s leaders now want to “consult” on their handling of antisemitism.

Let’s tell them how we feel.

We will demonstrate on Thursday 19th July in Parliament Square at 18:30.