This week’s Good News Friday is going to be Zionism week, starring my very own family!

My first item is Aliya, specifically from the United States. This week 232 Olim came to Israel on a Nefesh B’Nefesh charter flight (via Reality) – including the daughter of a US Senator:

The daughter of former US senator Joe Lieberman was among 232 new North American immigrants to arrive in Israel on Wednesday on a flight chartered by aliyah organization Nefesh B’Nefesh (NBN).

Lieberman’s daughter Hana Lowenstein immigrated to Israel together with her husband Daniel and their four children who range between the ages of two and seven.

Watch this great video of Senator Liberman and his wife saying “Baruch Hashem” that their daughter is making Aliya:

… The Lowenstein children are four of the 127 children who were on the flight, comprising more than half of the new immigrants whose aliyah was facilitated by NBN in collaboration with Israel’s Ministry of Aliyah and Integration, the Jewish Agency for Israel, Keren Kayemeth Le’Israel and JNF-USA.

The immigrants range from 6 months to 80 years old, and include 34 families, 18 singles, three sets of twins, six future IDF soldiers and 15 medical professionals.

62 of the olim will be moving to Israel’s periphery, 35 of those to the South, under the joint Nefesh B’Nefesh-KKL “Go Beyond” initiative which supports olim (new immigrants) moving to those areas, as well as Jerusalem.

“Each day that brings new olim to Israel is a joyous occasion, especially when there are 130 children on a single aliyah flight. This is the future unfolding before us,” said Minister of Aliyah and Integration Sofa Landver, who attended a festive welcoming ceremony held for the new immigrants at Ben-Gurion Airport. “These newcomers, together with the country’s veteran olim, are strengthening Israel’s resilience, economic development and society as a whole. I am so pleased that many of today’s olim are joining our Negev-Galilee project which will help strengthen Israel’s periphery.”

One of those groups that arrived this week had other VIPs on board – my cousins Miriam and Meir Tannenbaum and their children! We have been so excited waiting for them to make the move, and despite the 4 hour (!!) wait in the arrivals hall, we were overjoyed to see the family take their first steps in Israel.

The Tannenbaum family makes Aliya, 1st August 2018, welcomed by myself and my sister-in-law

I want to wish the Tannenbaums, and of course all the other hundreds of Olim arriving over the summer, success and happiness and a יישוב קל – an easy resettling in the Land of Israel.

This Aliya from America is all the more wonderful because American olim, unlike immigrants from other places around the world, have no cause to flee their homes. They have chosen come to Israel out of pure idealism, Zionism, and Ahavat Yisrael. For this alone, American immigrants deserve a huge Kol Hakavod, all the honour and kudos.  They had such comfortable lives in the US, that it takes a great deal of idealism and Zionism (not to mention a modicum of insanity!) to leave all their home comforts to join us on the fantastic adventure that is called Israel.

My cousin Miriam told me that Rabbi Yisrael Meir Lau would quote the following verse from Isaiah, 60:8 when speaking about Aliya:

There are those who fly here as a cloud (pushed by the winds), or as doves to their dovecotes (flying on their own initiative)

In other words, there are olim who are “pushed” here by circumstances and those who choose, like my cousins and the other NBN olim, who chose to “fly home”.

Since we’re on the subject of Zionism, how fitting to mention that my “little” nephew Chanan has all grown up now and gone of to the army! He enlisted this week into the IDF with a large group of Hesder boys (i.e. military service combined with Jewish studies), and has made us all very proud. Nervous but proud. Here he is with a bunch of his comrades on their first day:

May Hashem protect Chanan and his friends, and all our soldiers, may their military service be successful and may they come home safely.

Changing the subject slightly, but still on the subject of local patriotism, the Israeli men’s gymnastics team (which I never knew existed!) won its first ever World Championship gold medal!

This should have made much greater headlines in Israel. Watch this fantastic video:

Mazel Tov to our men’s gymnastics team on winning their first ever World Championship gold medal! We are so proud of you. Way to bring it home!

Kol hakavod to the entire team for a brilliant display. May they continue on to more successes.

And like last week’s post, we can celebrate not only physical prowess but Israel’s brain-power, as Israeli high school students won 6 medals at the Maths Olympics for teens in Romania: (via Hadassah):

Israeli participants claimed two silver and four bronze medals, and as a result, Israel is now ranked 26th in the competition’s overall ranking. Contestants from United States, China and Russia came out on top.

Educational Minister Naftali Bennett praised the Israeli squad: “Israel can be proud! Math and science are the foundation for the continued existence of Israel as a startup nation; this is why in recent years I have put a particular emphasis on those subjects,” he said.

Kol hakavod to our junior maths geniuses! You have done us all proud! May you all go on to ever greater success.

Our maths champions are emblematic of Israel’s thriving hi-tech sector. One incredible new idea (via Hadassah) is the development by Technion students of a mobile phone app that can predict and diagnose a cardiac fibrilliation attack at least 4 minutes ahead of time. Those four minutes could mean the difference between life and death. 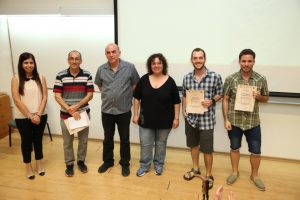 Translating roughly from the Hebrew link above, students Noam Kedar and Gal Idelstein won the first prize in the Technion’s Faculty for Bio-Medicine exhibition of end of year projects. They were tutored by Ido Weiser Biton from the laboratory of Deputy Professor Yael Yaniv.

Kol hakavod to the students for this excellent invention which will likely save many lives.

And now coming full circle back to Zionism and love of the land, as you are all aware, the South of Israel has been burning over teh last 3-4 months, caused by the Hamas terrorist arson attacks via incendiary kites, balloons, and even devices tied to falcons. The damage has been dreadful, with thousands of acres of farmland and nature reserves destroyed, beehives burnt, animals incinerated, and yet our leaders stand helpless in the face of  these attacks.

I’m pleased to say that some Petach Tikva residents are not prepared to stand idly by while their compatriots suffer, and the Oz VeHadar community organized a planting event and communal garden in the fire-stricken south:

Members of the Oz Vehadar community in the Hadar Ganim neighborhood of Petah Tikva went down to Moshav Shuba in the Negev on Thursday to take an active part in a planting event and set up a communal public garden in the moshav.

From Petach Tikva with love – replanting in the south of Israel

The trees that were planted were bought from the Jewish community’s fundraising campaign for the moshav. The guests from Petah Tikva emphasized that the planting of the trees and seedlings came as a response to the terror attacks that have plagued the area for the last four months.

“In a place of destruction and destruction, we want to grow again,” said Aviat Laufer and Anat Statler, who initiated the volunteer work. “We came to you residents of the Gaza vicinity, with seedlings and a warm embrace from the center, to say simply that we are with you.”

From Petach Tikva with love – replanting in the south of Israel

“The event was carried out with the help of Petah Tikva Mayor Itzik Dayi, [note: Itzik Braverman is the Mayor, Dayi is a Council member -Ed.] chairman of the Jewish Home in the city,” emphasized Laufer. “We are all praying that the communities surrounding the Gaza Strip will soon enjoy real quiet and that all the blackened land will quickly become green again.”

The activity was carried out in cooperation with the Shabeh Group, a community-based community organization that joined and joined the veteran Moshav of Shuba nine years ago. “The organization is active in education and the environment,” said Aharon Ariel Lavie, a member of the group. “We joined the community of Oz Vehadar from Petah Tikvah and held the event together with the veterans of the moshav, in the presence of the head of the council, Tamir Idan. The garden is named after Tita Montin, a rare woman from the founding generation who passed away a year ago.”

“After four months of fires, we want to bring the green back to our eyes and show that resilience is an active thing,” Lavi concluded.

What a wonderful initiative! I am proud to live in a city whose residents worry about others and go to such lengths to provide support to the south.

Watch the video below (Hebrew only).

We get so caught up in the bad news that dominates the news cycles that we forget that we have so much to be grateful for, grateful to our fellow Jews and thankful to Hashem who has brought us to this wonderful country.