Who will rid us of this troublesome Corbyn?

Jeremy Corbyn has never heard of the adage that when you’re in a hole, stop digging. Every time we think he has hit rock bottom he digs a little further. The antisemitism row in Labour has now reached epic proportions and is dominating the news cycle in Britain. I could dedicate this blog to the doings of Corbyn and there would still be a bottomless pit in which to dig for more material.

Here are the latest scandals and sub-scandals surrounding Corbyn and his merry band of antisemites.

First, here is the “man” himself, a vicious anti-Israel antisemite. There is no way he can claim to be “a man of peace” with the way he is talking here:

We found a special clip in our archives of John Mcdonnell MP and Jeremy corbyn outside the UK Israeli embassy riling up the hatred against Israelis in 2008.
Watch what Jeremy says he wants to do with Israel. He will
Implement this and worse under a Corbyn Government

Similarly, Alex Massie writes in the Spectator about “the myth of Corbyn, the kind and gentle man“: (emphases are added):

How much will this summer of anti-Semitism really cut through with the average voter? Less than you might think, I suspect. In the first place – and this may be a good thing – Twitter remains a niche platform and political Twitter a niche even there. Secondly, the public have already made up their minds about Corbyn and they think he’s a dud.

Each month YouGov asks whether Jeremy Corbyn or Theresa May seems the best available prime minister and each month Corbyn trails Theresa May. Sometimes he is also beaten by “Don’t know”. And that’s Corbyn: a man who can come third in a two horse race.

But, they splutter, look at what a kind and gentle and decent man he is. Why can’t other people see that he’s a valiant activist for peace? Possibly because growing gourds is not enough to actually qualify as a champion of peace and harmony around the world. Possibly because, for a decent fellow, he spends a startling amount of time with thoroughly indecent people. He keeps falling in with the wrong crowd while never being a member of the wrong crowd himself. There is no need here to document the long list of unsavoury people with whom Corbyn has been happy to associate himself because, really, what is now the point of doing so? He is who he is and we know who he is.

In Corbyn’s world everything has a single, simple, explanation. Colonialism is the root cause of all root causes. That insight – if we can call it that – dictated his views on Ireland just as it dictates his views on the middle east and Cuba and Venezuela and everywhere else. From there it is but a short leap to the kind of deluded wishful thinking that animates what passes for his thinking.

If this leaves you with nothing – precisely nothing – useful to say then so be it. You will at least remain pure in heart. If this means you are no kind of “peace campaigner” at all then that’s fine too because you will be shielded by your own impenetrable sanctimony. As poses go, this is an awfully comfortable one but it’s not serious politics in any way whatsoever.

But it isn’t enough. There’s more.

The latest scandal has erupted over the revelation that Corbyn participated in a memorial ceremony for Palestinian terrorists in Tunisia. Photos have emerged of Corbyn standing next to Palestinian terror leaders as he holds a wreath. He has tried to weasel out of this awkward situation by making the utterly absurd claim that “he didn’t think he was involved” despite actually being present.

Sky News has the story:

Jeremy Corbyn has admitted being present at a wreath-laying memorial for Palestinian terrorists accused of being behind the murder of Israeli Olympic athletes in 1972. 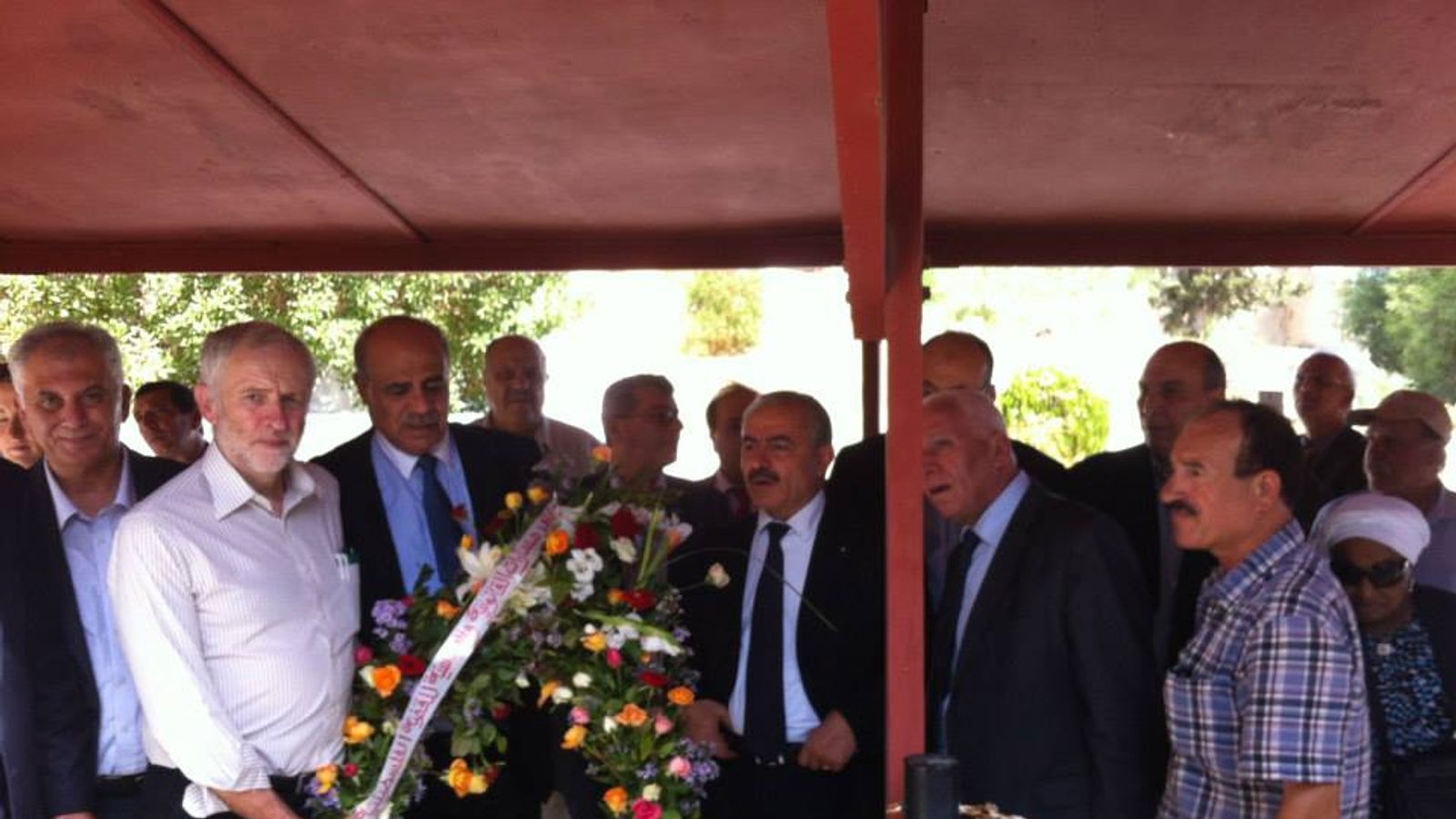 The Labour leader revealed he was there but did not “think” he was involved in the wreath-laying.

It comes after pictures surfaced over the weekend of Mr Corbyn with a wreath at a cemetery in Tunisia four years ago.

Critics claimed he was standing near the grave of a group of terrorists behind a siege at the Munich Olympics in 1972, which saw 11 Israeli athletes and coaches and one police officer killed.

Mr Corbyn’s spokesperson had said he was commemorating 47 people killed in an Israeli air strike on a Palestine Liberation Organisation (PLO) base.

But an article in the Morning Star Mr Corbyn wrote after the ceremony claimed wreaths were laid for “others killed by Mossad agents in Paris in 1991”.

Israel’s secret service is accused of assassinating those behind the 1972 siege. The PLO’s liaison officer with foreign inteligence agencies, Atef Bseiso, was killed in Paris in 1992.

Mr Corbyn said last year he “absolutely was not” honouring any terrorist and had only laid a wreath to those killed in the air strike.

But speaking himself for the first time since the new photos emerged, Mr Corbyn was asked about the wreath laid to those terrorists.

He said: “A wreath was indeed laid by some of those who attended the conference for those who were killed in Paris in 1992.

“I was present when it was laid, I don’t think I was actually involved in it.

“I was there because I wanted to see a fitting memorial to everyone who has died in every terrorist incident everywhere.

Watch and listen to his weaselly words as he tries to wiggle his way out of his own lies. Amazingly this video is from over a year ago but has only come to public awareness now:

Corbyn's answer to me saying he laid a wreath in Tunisia; when I asked about Munich massacre perpetrator pic.twitter.com/AiWy6X7HCT

On a lighter note, Corbyn’s pathetic excuses abotu “not being involved” in the wreath laying have given rise to Twitter memes like these:

I was present…I don’t think I was actually involved. pic.twitter.com/0aTvcsA3rJ

Regarding everything we have ever been accused of:

We were present but we don't think we were involved.

More seriously, Sussex Friends of Israel brings us this Sky News interview with Ankie Spitzer, the widow of Andre Spitzer, one of the Israeli athletes murdered by PLO terrorists at the 1972 Munich Olympics:

Brendan O’Neill in Spiked Online expands on why Corbyn and Munich really matter:

The Corbyn and Munich story matters. It is serious. And yet too many of his supporters refuse to treat it as such. They have even, in spectacular Orwellian fashion, turned it into proof of Corbyn’s unimpeachable internationalist decency. He was only in that cemetery because he cares so much about Palestinians and global justice, they say. Can they just stop for a minute and think about what Corbyn’s past associations might tell us about the moral disarray of the modern radical left, and about the possibility that anti-Zionism has morphed from a political position into a prejudiced worldview? Everyone benefits from self-reflection. That is what is needed here.

So we now know Corbyn was at least ‘present’ for the commemoration of Black September operatives. For men who in 1972 kidnapped 11 members of the Israeli Olympic team, beat and tortured them, and then shot some of them dead before incinerating the others by throwing a hand grenade into the helicopter cockpit in which they were tied up. As I say, this is serious.

Of course, the whole thing is being folded into the interminable commentariat spat over ‘Tory Islamophobia’ and ‘Labour anti-Semitism’. That so much of public life is now refracted through this shouting match, with leftists saying ‘Boris hates Muslims!’ and right-wingers saying ‘Corbyn is an anti-Semite!’, tells us a great deal about the hollowing out of the soul of British politics and the replacement of substance and vision with a constant identitarian bickering….

And yet Corbyn/Munich still matters, even if we must disentangle it from the identitarian finger-pointing climate. Why? Because it points to a colossal lack of judgement on his part, and more importantly to a colossal lack of judgement likely to have been nurtured by the binary moralism of contemporary anti-Israel hatred. That is, if Corbyn was present at this ceremony for Black September members but not really thinking about it – present but not involved – that actually tells us a great deal about the problem with anti-Zionism today.

It tells us that the motor of this new anti-Zionism is not political thought, far less any kind of reasoned analysis of events; rather, it is the desire of an increasingly disoriented radical left to fashion a simplistic moral terrain in which they might be on the side of Good against an unquestionably Evil foe. Which, of course, is Israel. Always Israel. The foulest state on Earth. The embodiment of human wickedness. The tiny nation that sums up everything that is wrong with the world today. When such infantile moralism is your guide, thoughtlessness and even prejudice are your inevitable next stops.

And here is a Sky News press review in which the reviewers take Corbyn apart for his disgusting behaviour:

Jeremy Corbyn making the Muslim Brotherhood salute. https://t.co/hWsVHMzvz8 But I’m sure we’ll be told that it wasn’t his hand, and if it was then his thumb was nearby anyway so it was just an incomplete wave. And his mum was at Cable Street, so he must not be questioned!

And yet, with all that, Corbyn’s acolytes, just like the members of a cult, can see no wrong and smell no evil around their Dear Leader Jeremy Corbyn. Just watch these gormless idiots as they swoon in adoration of their Leader. One of them is even convinced Corbyn won the Nobel Peace Prize!!  🙄  You couldn’t make this stuff up. It would be hilarious if it weren’t so frightening and so sickening.

The cult is real. pic.twitter.com/Ze5NyFkvLB

What is even more nauseating are the tweets and comments under every single thread about Corbyn. The vicious antisemitism and anti-Israel hatred are, well, sickening. No matter what the original comment, what the background story is, it somehow becomes the fault of the Jews and/or Israel. I know it’s an exaggeration to say this reminds of 1930s Germany, and yet…

But maybe Corbyn will get his come-uppance the Al Capone way – via fiddling his expenses (not quite tax evasion but it’s the same principle):

Jeremy Corbyn is facing a parliamentary inquiry into claims that he failed to declare who paid for his wreath-laying trip to Tunisia https://t.co/IoMSyFV5R3

And if that doesn’t get him, maybe the younger generation of Labour members will form the renewed future of Labour as a sane leftist party:

I was passed this by a young Labour member and it's well worth a watch. They are the future and should be listened to. #EnoughIsEnough https://t.co/5jAVQ0jODE

Certainly with Corbyn at the helm, aided and abetted by his henchmen, the extreme-left Communist Seamas Milne, Owen Jones and so many others, not to mention the brainwashed Momentum movement, there is not a hope in hell that Labour can transform itself back into what it once was – a loyal opposition, not to mention a party in power. G-d help Britain if that comes to pass.

1 Response to Who will rid us of this troublesome Corbyn?