Good News Friday from the Galilee

You may have noticed that I’ve been rather quiet this week. The reason for this is that I’ve been on holiday up north with all my kids and grandchildren, staying in a “Tzimmer”, i.e. a holiday villa, in Dalton, a little Moshav near Tzfat (Safed). We had a fantastic (if noisy!) time, and now I am recovering with my DH in a hotel in Tzfat for a few days.

Here are some pictures of the beautiful views from the Tzimmer, from the top of Mt. Meron, and from our hotel room in Tzfat. Click on the first picture to view the gallery, and then on each picture to enlarge:

View from Tzfat at sunset

View from Tzfat at sunset

View of the mountains from our hotel room in Tzfat

I shall post some more photos at the end of this post, but first I’ll start with a regular Good News Friday posting.

First off we have some extraordinary good news from the world of gymnastics (via Reality). Israeli gymnast Linoy Ashram won the gold medal and broke a record for the clubs exercise in the Rhythmic gymnastics World Challenge Cup in Minsk:

Israeli gymnast Linoy Ashram on Saturday broke the world record in the clubs-handling round at the Rhythmic Gymnastics World Challenge Cup in Minsk, and went on to win the gold medal in the all-round phase of the competition. 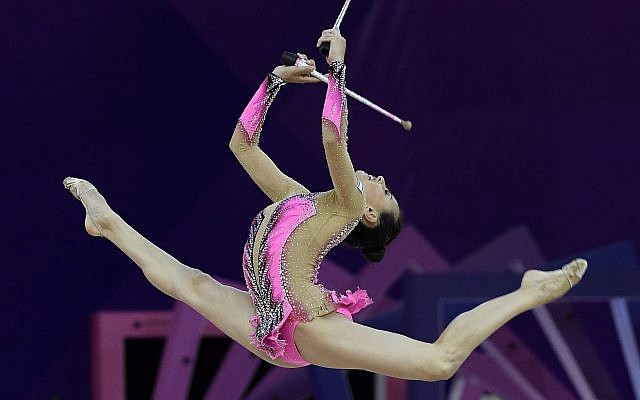 Linoy Ashram in a 2017 competition

The 19-year-old Ashram received a score of 20.65 for her clubs demonstration, surpassing the 20.05 record set at the 2018 European Championships by Russian Dina Averina.

Ashram went on to receive a final score of 77.800 in the all-round stage, winning the gold medal.

The Israeli Olympic Committee noted that Ashram is the first person in the history of the Challenge Cup to win two gold medals in one season, after she won a gold in the competition in Spain in May.

Heartiest mazal tov to Linoy and kol hakavod on her incredible win. May she go on to many more successes in the future, making us proud that she represents Israel.

And now on to a spectacular #BDSFail: SodaStream, that much maligned Israeli drinks company that has been the target of BDS for years, was sold this week to PepsiCo for $3.3 billion!

SodaStream CEO Daniel Birnbaum, who has entered an agreement to sell the maker of home seltzer machines to US food and beverage giant PepsiCo Inc. for $3.2 billion, said the deal represents a victory over the Boycott, Divestment and Sanctions movement, which aims to isolate Israel internationally. 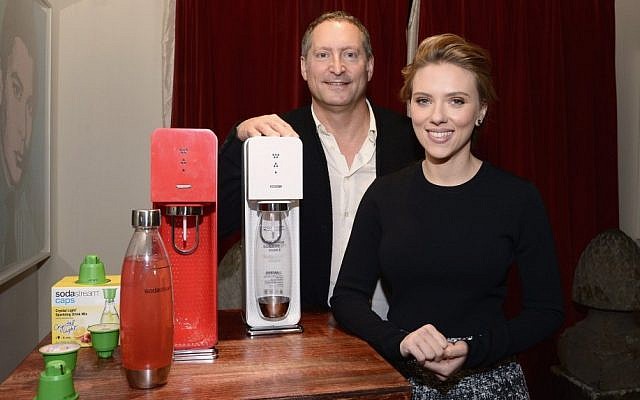 Birnbaum’s firm had become a target of the pro-Palestinian campaign over the location of its factory in the West Bank, before moving to a location inside the Green Line several years ago.

“Who is BDS?” Birnbaum said dismissively, in an interview with Channel 10 news on Monday night, hours after the sale was announced.

“I think they have learned not to meddle with us. Look at what happened to SodaStream that they targeted, and what has happened to them,” he said.

Even better news, Israeli jobs will remain in Israel:

On Monday, Birnbaum and PepsiCo CEO Ramon Laguarta hailed the $3.2 billion deal, with Birnbaum describing the fact that PepsiCo will leave operations in Israel in place for at least 15 years as an “entrance,” rather than an exit.

SodaStream will remain an independent unit within PepsiCo, with its headquarters in Israel and maintaining its own brand, led by Birnbaum. The deal will uncap opportunities for massive growth for SodaStream, Birnbaum said in an interview with The Times of Israel earlier on Monday.

This is excellent news all round, for SodaStream, for the Israeli economy and most of all for the massive kick in the teeth to BDS who remain obsessively focused on SodaStream.

What is even more delicious, Israel’s staunch supporters the Sussex Friends of Israel, explain in this Facebook post that it was the BDS targeting of SodaStream in Brighton that got the SSFI started in the first place! Here is SSFI’s post (transcript to follow):

Today Sodastream was sold to Pepsico for $3.3 Billion and we couldn’t be happier!….

There may be some of you who might be unaware how Sussex Friends of Israel came into being. So let me give you a brief history of how it started. About eight years ago a shop called Ecostream opened in our home City of Brighton. Ecostream is owned by Sodastream. Sodastream is an Israeli company.

Ecostreams emphasis was on selling every day products with as little packaging as possible. A perfect fit one would think between Brighton – a city with this countries only Green MP and a city that prides itself on its environmental credentials – and a truly innovative, ground breaking ‘green shop’

Unfortunately that was not the case to a few mindless, hate driven, old fashioned, left wing antisemites called the ‘Brighton BDS.’

They hate Israel with such a passion and to such a degree that even Sodastreams sterling work in ensuring Palestinian and Jew, Christian and Muslim all work together in peace and harmony at their factories was not good enough for these ageing relics from pre-war Germany!

They ONLY hate Israel. They are not concerned about dreadful events in Syria or Yemen or North Korea or anywhere else for that matter. They have one focus and that focus is solely on the worlds one and only Jewish state!

They decided – despite pleas from Sodastreams Palestinian workforce not to – that Ecostream must be boycotted and must be shut down. So they started picketing Ecostream!

Not just picketing though. They intimidated, they harassed, they chained themselves to the shop. In one now famous incident they reduced a young lady who worked in the shop to tears by calling her ‘a child killer’ The lady in question was SIX MONTHS PREGNANT!

Her ‘crime?’ Simply that she worked in a shop in Brighton that was owned by Israelis!

Videos were made of their members claiming they wouldn’t boycott ‘Israeli Arab owned shops’ just ‘Israeli Jewish one.’ Others demanded that more ‘Israelis were taken hostage’ when news came of the three boys kidnapped in 2014. And of course we heard from their ranks the incessant chant of ‘from the river to the sea, Palestine will be free’ A clear call for the destruction of the Jewish state. The antisemitism oozing from their ranks was evident on a weekly basis.

Quite simply they behaved and acted like the Nazis they purport to hate!

That’s were we came in!

By chance a Christian Zionist and a Jewish Zionist independently witnessed what they cockwombles were doing on the very first week. To both it was evident that this could not be allowed to continue without some kind of opposition.

Sussex Friends of Israel was born.

For two years a growing number of Jew, Christian and people of no faith stood in defiance of the antisemitic hate mob that is the Brighton BDS. We laughed, we joked, we sang, we even danced but most important of all…we ate! We stood in all weathers and in testing circumstances to expose the hate and lies of the BDS Movement.

Not once did the hate of the Brighton BDS go without challenge. In short we, Sussex Friends of Israel, made sure Israel had a voice on the streets of Brighton. We showed that boycotts and hate have no place anywhere and only serve to harm those that pretend to help.

Eventually Ecostream closed. The BDS claimed a great victory. That is simply untrue, it was far from that.

Sodastream insisted it was simply a business decision and that the decision to locate the shop in such a poor location was reason for its closing. CEO Daniel Birnbaum has repeatedly said that Sodastream will never cower or run from the BDS. Sodastream’s continue to be sold across Brighton, the UK and the world. Sodastream continued to grow and thrive.

Today Sodastream was sold to Pepsico for $3.3 BILLION!

I REPEAT: today, Sodastream, the parent company of Ecostream, the little store in Brighton where SFI started, was sold to a huge US company for $3.3 Billion.

The old saying that ‘he who laughs last laughs loudest’ could not be truer in this case. A massive BDS Fail!

I leave you with a few pictures from outside that little shop in Brighton where it all started.

Perfect! Kol hakavod to the brilliant founders and activists of Sussex Friends of Israel. Maybe we should send a bouquet of thanks to BDS Brighton for getting them going in the first place!  😈

And now I shall go back to the beginning of my post and show you some pictures of our beautiful country. ❤

As I said, we stayed in a Tzimmer in Dalton which had the most beautiful garden and pool area (the house itself was nice too and the landlord was just lovely and helpful).  Just look at the laden fruit trees in the (not very large) garden, fruit with which our country is blessed and which is all ripening now. In fact the landlord came in every morning with bowls laden with grapes and peaches freshly picked off his trees!

As before, click on the first picture to view the gallery, and then click each picture to enlarge:

Pomegranates ripening on the tree

An overladen peach tree against the brilliant blue sky

Grapes fully ripe on the vine

In addition to the fruit trees, the Tzimmer came equipped with its very own cat, Maisie. She is so similar to my own cat Joey that for a moment I thought that Joey had snuck into our car or followed us all the way up north 😀

Hiding in the grass

But cats and fruit trees aside, our main enjoyment of course was spending quality time with all our children and grandchildren together. It was really heart-warming to watch the little cousins playing together, and my children and in-law children working, chatting and generally hanging out together. This is what our Rabbi used to call “Echt Yiddishe nachas!” (Real Jewish nachas or happiness).

As a grand finale I leave you with a picture of our “biker gang”:  😛

And to cap it all off, the Ganze Mishpocho: 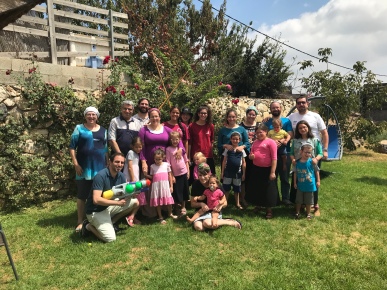 I hope you enjoyed this post as much as I enjoyed writing it. 🙂

I wish you all Shabbat Shalom from beautiful peaceful Tzfat.

17 Responses to Good News Friday from the Galilee