It’s the first Friday of 5779 and the last Friday before Yom Kippur. Luckily there is plenty of good news to fill my latest Good News Friday installment.

Let’s start with a healing kind of item. US military veterans have been combatting PTSD through participating in an archeological dig in Israel, to the benefit of all parties:

Seven United States military veterans recently completed an unusual tour of duty — at Israel’s Beth She’arim archaeological excavation. The group participated in one of a growing number of international programs which send former servicemen back into the field — with shovels, not swords. 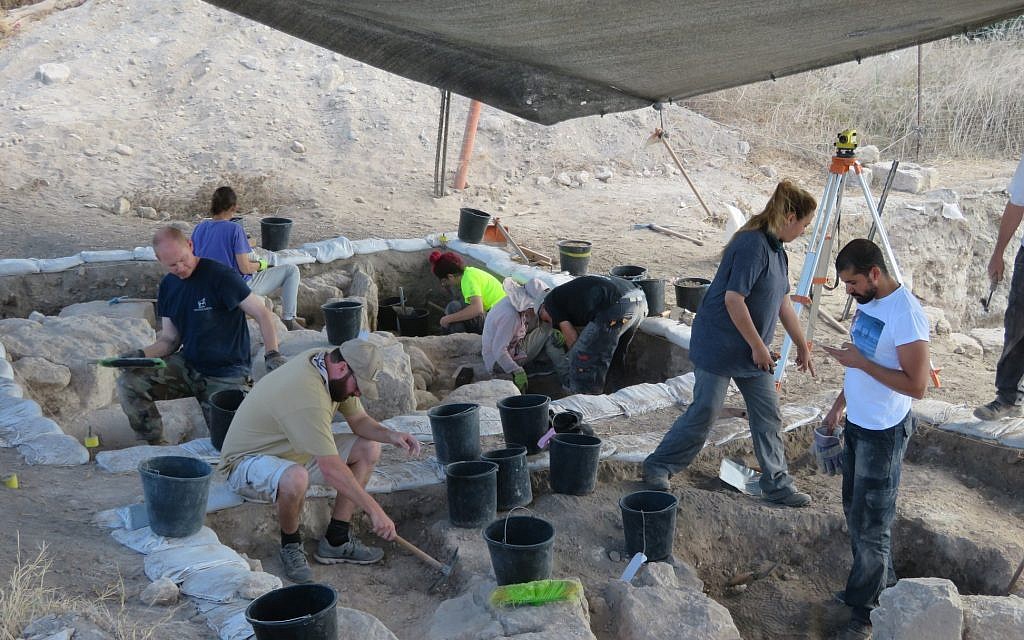 By digging into the dirt, the veterans — most of whom suffer from Post-Traumatic Stress Disorder — hope to find piece of mind, connect to the roots of their trauma, and be part of a cohesive team reminiscent of their former military units.

For the group of US vets in Beth She’arim, coming to Israel offered an added therapeutic element: returning to the Middle East, the source of their trauma, and working alongside a diverse team of Israeli Arabs and Jews, mostly military vets themselves.

During their two-week stint of physically digging into the past, the US veterans’ stereotypes about Israel and the Middle East also crumbled, according to founder of the American Veterans Archaeological Recovery (AVAR) Stephen Humphreys.

“The team was excavating alongside Israelis from all walks of life — Jews who had served in the military, Muslims. They saw how multicultural the people are, but also how kind,” said Humphreys in a phone conversation this week.

Israelis are known for candid speech peppered with no-holds-barred opinions. That, said Humphreys, was very comfortable to the vets, who were accustomed to a similarly straight-forward culture from the military.

Being in Israel, he said, was “a little eye-opening” for the seven former servicemen. “As American vets, we tend to segregate ourselves and think no one else understands. But then we come to a society where everyone does understand, and being a vet is not that big of a deal.”

In coming to Israel, the US vets were met with a proliferation of soldiers on the streets and a culture that embraces its military as family. With the mandatory conscription of most Israeli men and women, servicemen are not the “other,” but the “us.”

This widespread service, said Humphreys could help veterans conceptualize their own post-military transition. “For the Israelis, this [IDF service] is something I did, and now I’m doing something different,” he said.

The dig is based in the Beit She’arim National Park, a UNESCO World Heritage Site in the Galilee in northern Israel, with important remnants of a major Jewish town during the Roman and Byzantine eras. It is known in Jewish tradition as the hometown of community leader Rabbi Judah Hanasi, who died in 217 and is widely thought to have been buried at Beith She’arim. The excavation is under the auspices of the University of Haifa, which Humphreys said “bent over backwards” to facilitate their needs. 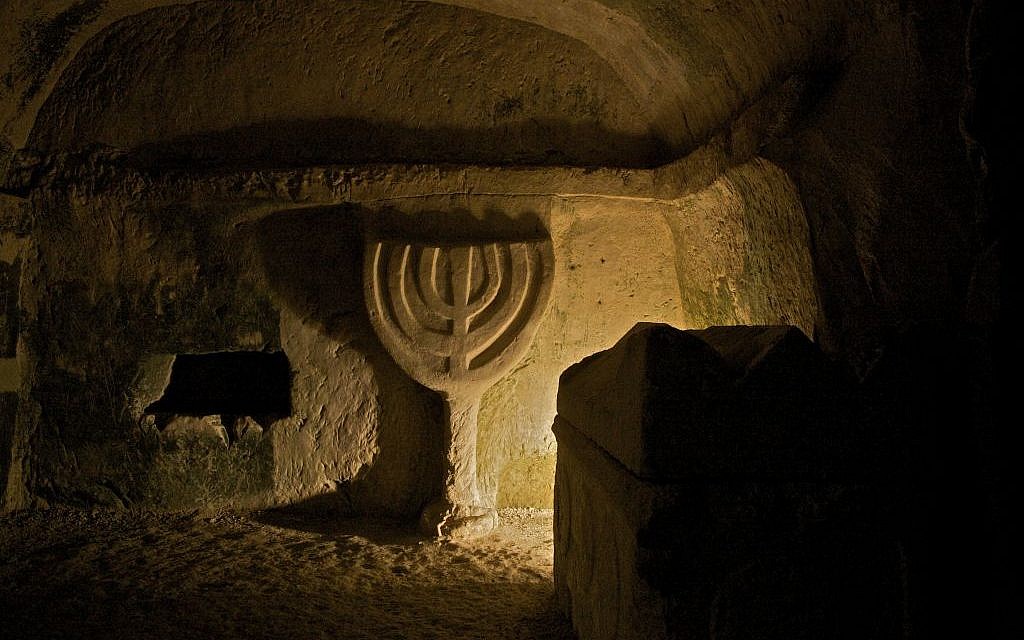 An emblem of a menorah carved in the stone, inside a structure at Beit She’arim National Park, an archaeological site in the Lower Galilee. (Doron Horowitz/Flash90)

It is a community excavation, said archaeologist Erlich, and open to all — from children to the elderly. The only prerequisite is a desire to work, she said. The veterans team worked alongside the Israelis — washing dishes, pushing wheelbarrows — and some had therapy on the grass in the afternoon. What Erlich called, “a healthy normal.”

Being in the Middle East, he had feared, would bring such a negative experience. Humphreys said that he was initially concerned about the reactions of several of the veterans, who told him, “Oh, this is like where I was deployed to… It’s more like the places I deployed to than I thought it would be.”

Psychologist Wild, however, believes going back to the proverbial crime scene can be especially healing.

“One of the components of that treatment is actually going back to the site of the trauma where it happened. This is really important because often people have beliefs or feeling like the site of the trauma is frozen in time, and it hasn’t changed, and it’s completely dangerous and overwhelming and I won’t be able to cope if I go back,” said Wild.

“In terms of veterans, using archaeology to come to terms with PTSD as a way forward this is novel and potentially could be really helpful because it’s not exactly their trauma site, but there will be reminders of their trauma when they’re there,” said Wild.

For the US veterans, the Middle Eastern culture of Israel, and touring the Christian sites in Arab neighborhoods of Jerusalem and towns, such as Nazareth, was a same, but different echo of the Middle Eastern areas they had served in. Humphreys said, however, the vets were given a positive experience in Arab neighborhoods and forged relationships with Israelis from all backgrounds.

What a fantastic idea! And it has been developed into such an excellent therapeutic program which also benefits Israeli archeology. Kol hakavod to Stephen Humphreys, the founder of the American Veterans Archaeological Recovery (AVAR) and to all the Israeli archeologists and the rest of the team who participated in this wonderful endeavour. Let us hope the dig brings peace of mind to the vets, and gives them great memories which maybe will bring them back to Israel on vacation.

Speaking of healing, here is some great news from the Eilat coral reef, which has regenerated itself after damage caused by fish farming, defying all expectations!

While coral reefs around the world are getting sicker as a result of global warming, the reef in the southern Israeli port city of Eilat is thriving despite years of damage caused by intensive fish farming in the waters and global warming.

According to a Hadashot TV news report on Friday, the healthy coral marks a victory against the damage caused by humans to underwater marine life.

From 1995-2008, waste from multiple “cages” for fish farming caused massive damage to the Red Sea coral, but after environmental and diving groups petitioned the government and appropriate authorities, the cages were removed and the coral has now bounced back.

But fighting back after the pollution from the fish farming is not the only remarkable victory for the coral. Global warming has in recent years caused colorful coral reefs to bleach and die around the world — but not in the Gulf of Eilat, or Aqaba, part of the northern Red Sea. 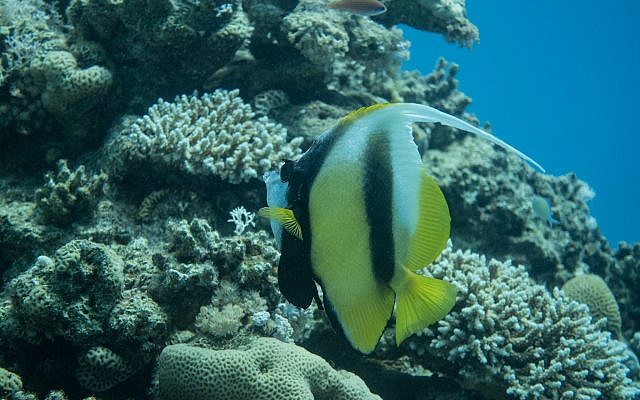 At the forefront of research into why the Red Sea coral seems to be so resilient, is Maoz Fine of the Interuniversity Institute for Marine Sciences, whose laboratory of water tanks and robots simulate the effects of climate change on temperature and oxygen levels in the water.

According to Fine, the Gulf of Eilat corals fare well in heat thanks to their slow journey from the Indian Ocean through the Bab al-Mandab strait, between Djibouti and Yemen, where water temperatures are much higher.

The wonders of G-d’s miracles can be seen every day in nature, as it regenerates and rejuvenates itself. But this particular story is especially wonderful given the unexpectedness of it. Kol hakavod to the researchers who showed us this miracle, and also kol hakavod to the “green” activists who demanded an end to the fish farming in order to preserve the corals.

Moving to sports now, Israeli gymnast Linoy Ashram did Israel – and herself – proud once again, winning the silver medal at the Rhythmic Gymnastics World Championships in Sofia, Bulgaria:

Israeli athlete Linoy Ashram notched a silver medal at the Rhythmic Gymnastics World Championships Tuesday as she continued to twirl her way toward the 2020 Olympics in Tokyo. 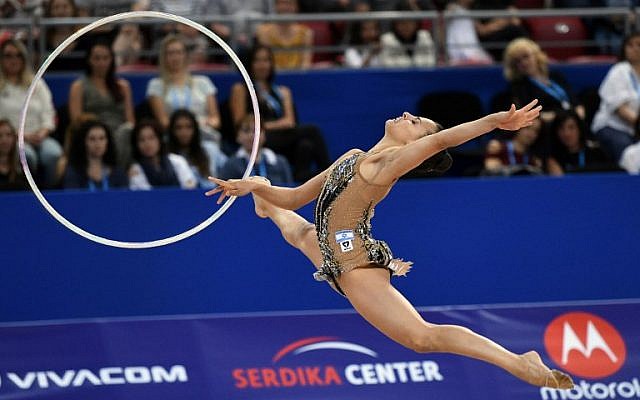 Ashram came in second place in the individual hoop final at the second day of the championships in Sofia, Bulgaria, with a score of 20.000. She was bested only by Russia’s Dina Averina, who received a score of 20,850.

Ashram’s Israeli teammate Nicol Zelikman got fifth place in both the hoop and the ball final. Ashram failed to make the final for the ball event.

Last month Ashram broke a world record in the event at the Gymnastics World Cup with a score of 20.65 for her clubs demonstration, surpassing the 20.05 record set at the 2018 European Championships by Averina.

Ashram went on to win the gold medal in that competition, becoming the first person in the history of the Challenge Cup to win two gold medals in one season, after she won a gold in the competition in Spain in May.

Watch Linoy in action this week in her fantastic hoop exercise:

Even better news, Linoy won yet another medal in the competition, the bronze medal for the ribbons routine.

A huge kol hakavod and Mazal Tov once again to Linoy Ashram and her team-mates at the competition. Gone are the days when Israel struggled near the bottom of the tables. Our wonderful gymnasts are taking the world by storm. Next stop, the Tokyo Olympics!

And to conclude, let us move from the sublime to the heavenly sublime. For the past month, Sephardi Jews have been saying the Slichot (penitential prayers) between midnight and dawn, and their Ashkenazi brothers have joined them since the week before Rosh Hashana. In the last few years it has become a new tradition for tens of thousands of people, religious and secular, to attend huge Slichot services at the Kotel. Last night the Kotel simply overflowed with people, with worshippers having to be extricated and even prevented from arriving due to the sheer mass of people there.

His last point though was the most moving:

For 2,000 years the City of Jerusalem dreamed of hearing such complaints! It seems as if the stones of the city were enjoying seeing the Slichot worshippers, celebrating the slow procession of the crowds of people who fulfilled the ancient saying “This place is too small”. We were so happy to participate last night in realizing the city’s dream!

What a wonderful thought to take away with us to the Shabbat before Yom Kippur!