The truth about Khan al-Ahmar

The airwaves and media are full of news, actually fake news and misinformation, about the fate of the Khan al-Ahmar illegal settlement – yes I shall call it what it is. Rather than using that epithet to describe perfectly legal Israeli villages, I shall use it for what is truly represented by those words.

The propaganda being bandied about concerning Khan al-Ahmar is reminiscent of the polemics surrounding the resettling of the Negev Bedouin under the Prawer plan back in 2103. That plan too, despite being proposed by the most human-rights oriented and leftist courts in the land, was roundly condemned by the usual alphabet-soup of the EU, UN and other NGOs. 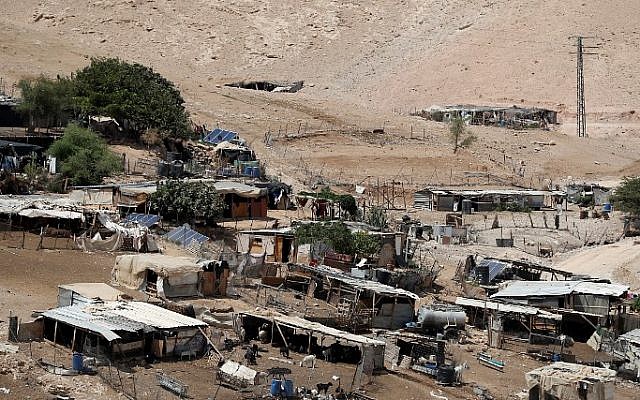 So here we are in 2018 and nothing seems to ahve changed. Whatever Israel decides to do inside its own territory becomes the business of every busybody in the world – as long, of course, as it’s Arabs being turfed out of their homes. I note that we didn’t hear a whisper of protest when Amona, Migron and Netiv Ha’avot were destroyed for no good reason at all.

The latest chapter in this saga occurred when the Europeans (who else?) protested Israel’s planned resettlement of the Bedouin camping out at the illegal settlement of Khan al-Ahmar. The plan has wended its way through the entire Israeli judicial system, right up to the Supreme Court which rarely rules in Israel’s favour. Much to the surprise of all concerned, the Supreme Court ruled that the Israeli government is in the right, and Khan al-Ahmar needs to be evacuated as planned.

Defense Minister Avigdor Liberman sent a letter to eight European ambassadors in Israel criticizing them for their “flagrant interference in Israel’s sovereign affairs” after their respective governments signed a joint statement at the UN calling on Jerusalem to reverse its decision to demolish a Palestinian village in the West Bank.

The defense minister chided the eight countries, who in their joint September statement warned that the demolition of Khan al-Ahmar “would be very serious and would severely threaten the viability of the two-state solution and undermine prospects for peace.”

The defense minister argued that Khan al-Ahmar is an “internal” Israeli matter and that other countries have no right to intervene after the High Court of Justice deemed legitimate, last May, the state’s desire to raze the hamlet built without the necessary permits.

In addition to the lack of authorization from Israeli authorities, the state says the structures, mostly makeshift shacks and tents, pose a threat to the village residents because of their proximity to a highway.

“Israel expects to be treated with the same measure of dignity and respect for its judicial institutions and internal affairs as each of your governments rightly expects for its own,” Liberman wrote.

“We regard anything less as an expression of injustice and discrimination, unworthy of our friendly bilateral relations and of accepted norms governing the conduct of ties between sovereign nations.”

But Liberman rejected the implication in his letter to the European ambassadors. “The idea that moving a group of some 100 people within a five kilometer radius will prevent a resolution to such a complex historical conflict is hysterical nonsense,” he wrote.

Of course we have to wait and see if the evacuation order will actually be implemented. I am not holding my breath because we have been let down so many times before as our “brave” leaders chicken out of difficult decisions.

Meanwhile it is worthwhile watching this short video by Regavim about the decision to evacuate the village. Naomi Kahn, Director of the International Division of Regavim, clearly explains the legal situation surrounding the village, the incitement and provocation of the Palestinian Authority aided and abettted by the Europeans.

And watch this short video too in order to understand the full background of Khan al-Ahmar. It is in Hebrew so make sure to click on the little square (3rd from right at the bottom) to activate closed captions (English subtitles).

Stay tuned for more drama because I’m sure this issue isn’t going to go away. If nothing else the NGOs funded by the EU will make sure it stays on top of the diplomatic agenda.

2 Responses to The truth about Khan al-Ahmar