80 years since Kristallnacht and antisemitism is still on the rise

Posted on 8 November 2018 by anneinpt

The Synagogue in Hanover, burning during Kristallnacht, November 1938

The 80th anniversary of Kristallnacht falls tomorrow – the brutal pogrom, which came to be known as Kristallnacht – the Night of Broken Glass – in which hundreds of synagogues were burnt down, thousands of Jewish shops and business were destroyed and thousands of Jews arrested, deported or murdered, was carried out against the Jews of Germany. This marked the “visible” beginning of the Holocaust, although it had already begun back in 1933 with the election of Hitler and the enacting of the racist and antisemitic Nuremberg Laws discriminating against Jews.

We all know the rest of the dreadful story. If you are interested you can read my father’s experience on Kristallnacht as a child in his story here.  Dad’s story was also published in Sir Martin Gilbert’s book on page 110. You can also read the rest of my family history at the various links within the Family History page in the main menu above, and I recently updated the Family History with a new page on the 75th yahrzeit of my mother’s three brothers who were murdered in Sobibor during the Shoah.

Five years ago I wrote an article with a very similar headline and it is sickening to realize that nothing has changed in the interim. 80 years after Kristallnacht, antisemitism has continued to raise its ugly head and spread around the world, sometimes in its “old-fashioned” form of “classic antisemitism” like we saw in the attack on the Pittsburgh synagogue in America last week, but more often in the form of the “new” antisemitism in the shape of anti-Zionism, or more accurately, anti-Israelism. Israel has become the “Jew amongst the nations”, always picked on and singled out in international forums, accused of the basest of human rights abuses of which Israel is innocent but her accusers are extremely guilty. Israel-supporters are bullied, hounded and in general their lives are made a misery, particularly on campus, and Jewish and/or Zionist students have their lives made hell by the “pro-Palestinians” who are in fact not for the Palestinians but against Israel and the Jews. In other words, “old antisemitism, meet the new antisemitism.”

Incredibly, in recent days, when one would have thought that antisemitism has become  a rude word 80 years after the Holocaust, little seems to have changed.

Here is a selection of recent news items which should outrage all of us:

#BDS Berlin marks the #Kristallnacht pogrom with an anti-Israel demonstration. Note that their poster has the slogan "To exist is to resist" — a favorite of the notorious Tamimi clan, which includes several terrorists like Sbarro massacre mastermind &facilitator Ahlam Tamimi https://t.co/0ZC4ZOhxHT

Regular readers of my blog will know that British Labour Antisemitism is an issue that not only will not go away but seems to be growing. British commentator Ron Liddle has written about his slow awakening to the problem (he is not Jewish) and his journey to the depths of British antisemitism:

This new rise in antisemitism, which I had thought long dead, was not shaven-headed white imbeciles from the far right. It was Muslims, a large chunk of it. The giveaway was the graffiti the report didn’t show: “Allah U Akbar!” The National Front rarely paint that on walls.

Suddenly I grasped that the British far left didn’t want people to know about antisemitism because it pointed the finger at people they really, really liked. From that moment on, it all fell into place. 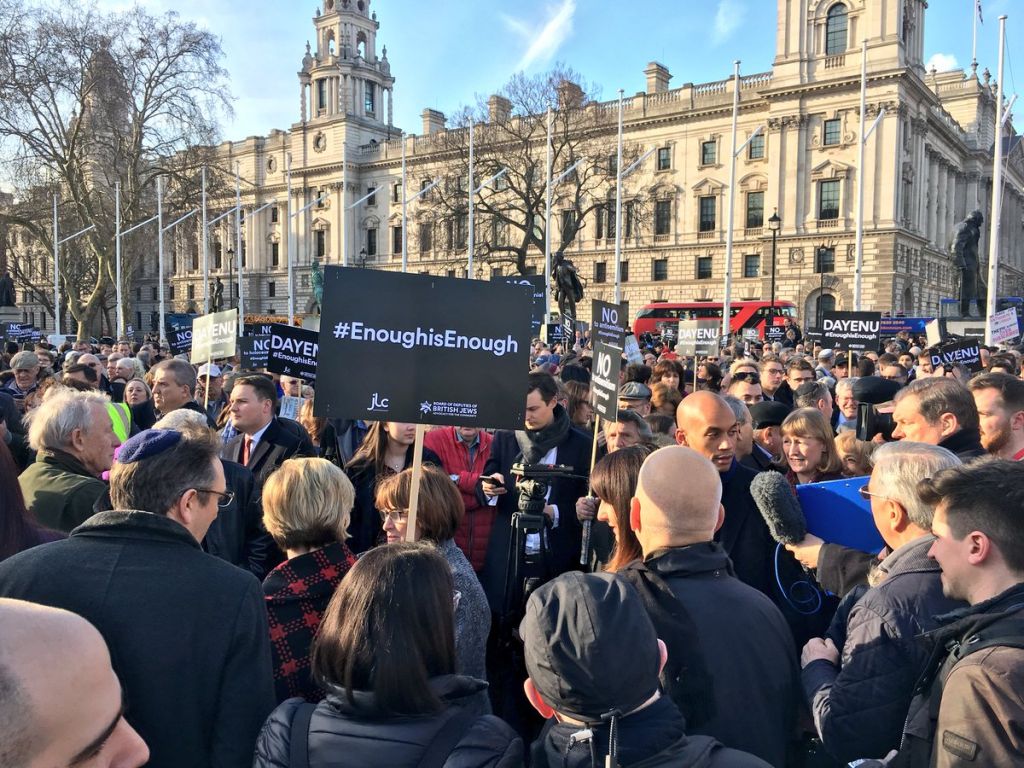 Fast forward 13 years and I was kicked out of the Labour Party, of which I’d been a member for 40 years, for having attempted to explain the party’s strange affection for antisemitism.

It was the consequence, I reckoned, of the growing number of Muslim activists and councillors within Labour (four had just been suspended for making antisemitic statements) and the infantile supposedly liberal far left whose unconditional support for “Palestine” (to the exclusion of every other supposedly persecuted minority in the world) was an even more potent symbol of their status than shopping at Waitrose and eating quinoa. These groups loathe Israel as much as they loathe the capitalism which has given them their comfortable existences.

I was at first inclined to believe that this was a different kind of antisemitism from that of Hitler and the Nazis. These left liberals had kind of acquired antisemitism, I thought, as they mixed with the fervid, screeching rabble on demos and in their interminable bloody meetings. It is vile, obviously, but not as deranged and genocidal as the Nazis, surely, I thought.

But my journey was not yet over.

Time and again the same tropes emerged, the same sort of stuff that Streicher and Goebbels would have commended – and uttered. You can’t tell the truth about Palestine because Jews control the media. They run the government.

And Jews, don’t forget, were the architects of capitalism. And from that a whole bunch of other stuff emerged: the old blood libel business (a favourite of the repulsive Jenny Tonge), the Facebook posts from Labour lefties asking: what have Jews ever done for the world?; or demanding that Israel be demolished and maybe set up in the USA; Ken Livingstone suggesting that Hitler was a Zionist, the only point of such a ludicrous statement being to equate Zionism with Nazism.

It is the same antisemitism, exactly the same: the obsession with Israel to the exclusion of everything else, the conspiracy theory paranoias, the derangement. It took me a few years to realise it and I guess you lot knew it all along. So, please: forgive me. It’s just that it was something that seemed hard to believe –in my caring, Socialist, party.

Here is Lord Kestenbaum eloquently addressing the House of Lords recently on the issue of antisemitism, specifically calling out the Labour Party for the antisemitism within its ranks and its leadership:

Rabbi Jonathan Sacks also addressed the House of Lords and described in his own inimitable way the perils of antisemitism not only to the Jews but to its host country:

It is not only in Britain that antisemitism in politics has reared its ugly head. America is not immune, beyond the horrific synagogue attack:

What a shame that the first 2 Muslim women elected to Congress don’t like Jews very much.

Rashida Tlaib supports the one-state-solution, the end of the Jewish state.

Illan Omar said “Israel has hypnotized the world, may Allah awaken the people and help them see the evil doings”

An antisemitic Republican, Steve King, also won his election race despite being criticised by the Republican leadership for his views.

But there are some spots of light amidst this darkness, because unlike in the 1930s there are people of influence who are on our side and are not afraid to stand up and call out the antisemites wherever they are.

Actress and feminist icon Alyssa Milano, one of the #MeToo movement leaders, made it clear recently that she has had enough. “Any time that there is any bigotry or anti-Semitism in that respect, it needs to be called out and addressed. I’m disappointed in the leadership of the Women’s March that they haven’t done it adequately,” Milano said In an interview with The Advocate when she was asked about the march leader’s relationship to the Nation of Islam’s Louis Farrakhan. Milano said she would decline to attend the next Women’s March.

Alyssa Milano condemns the Women’s March for their antisemitic associations

Milano has had enough. I have had enough. We all should have had enough. The Women’s March has consistently, repeatedly failed to address ingrained institutional anti-semitism. It must be confronted before the next March in January. We will not wait any longer. Our resistance to hatred will only grow.

While American Jewish Women have been screaming themselves hoarse about the dangers of growing anti-semitism, the Women’s March has been asleep. It has been ensconced in its biases. It has enabled hate against us by refusing to hear our pain. Embracing hate groups is not coalition building. Ignoring our voices and the reality of the threat to our community—especially now, after the massacre of Jews in Pittsburgh— is a byproduct of that hate.

Adam Milstein writes in the Jerusalem Post that the time has passed when Jews should suffer Jew-hatred lying down. It’s time to confront the Jew-haters

When we see antisemites acting out their hateful bigotry, we are confronted with a choice: What do we do? Do we condemn the evil and hope for the best? Do we stick our heads in the sand and ignore the ever-rising threats? Do we ask the government and other groups to defend us because we are passive or risk averse? Do we turn our backs on the future of our people and allow history to repeat itself?

I previously wrote about how today’s antisemitism manifests as a three-headed monster. This monster spews its vile bigotry through the radical Right, the radical Left, and radical Muslims. Each one of these hateful heads poses a real threat around the world. These radical groups work to divide our community to make us weaker and easier to target. We put aside our internal politics and band together, as proud Jews, finding the courage and strength to fight these groups.

How? First, we must closely learn about those who seek us harm. That means investing more resources into research capabilities, drawing on the latest technology to uncover the antisemitic networks online and off-line. We must understand what antisemites are saying, what their plans are and how they operate. We must us this knowledge to expose their unlawful activities and better protect our Jewish institutions in partnership with law enforcement.

Second, we must fight the alarming progress of antisemitism from the extreme fringes of our public discourse into the mainstream. We must be vigilant in educating the public about the evil and the true intentions of antisemitism, whether it is spewed by Louis Farrakhan, Jeremy Corbin or David Duke. For too long we have behaved as if antisemitism is merely distasteful, but not a danger. The attack last weekend made very clear the stakes for us all. Journalists, politicians, celebrities, and business leaders must be immediately called out when they echo antisemitic canards.

Third, we need to utilize the research acquired and to invest more in the physical security of our Jewish schools, synagogues and other institutions. As Jews, we cannot ignore the fact that we are all targets.

Jews don’t have to be like sheep led to the slaughter. Unlike Jewish communities in the past, we have human and civil rights – the right to vote and serve in the government, and the ability to fight back.

We are a proud people with a long memory, who live in the time with a strong and thriving Jewish state. We don’t have to be afraid and passive. We shouldn’t stay beneath the radar to maintain our pristine and nice reputation. We must be proactive and fight this head on.

These are stirring words to live by and to act upon. “Enough is Enough” as the British Jewish community declared, as the American Jewish feminists declared, and now all Jews worldwide must take to heart. We must not let the Jew haters win and we have it within our power to beat them if we stay united and focussed.