Posted on 9 November 2018 by anneinpt

After an anniversary like today’s we need a Good News Friday post to put us into the mood for Shabbat.

On the subject of Kristallnacht, it is good news indeed that a rare 150-year old Torah scroll was discovered inside a shack on the site of the Lodz Ghetto:

A 150-year-old Torah scroll was found inside a shack in the Polish city of Lodz on a street that was part of the Jewish ghetto during the Holocaust.

The Torah scroll found in a wooden shack in the Lodz Ghetto. . (photo credit: SHEM OLAM)

The scroll was transferred to the Shem Olam Holocaust Institute, established in 1996 in Kfar Haroeh by Rabbi Avraham Krieger, which then brought it to Israel.

The Lodz municipality was planning to demolish a number of old wooden shacks that had housed Jews. The scroll was found hidden inside a wall. Other Jewish artifacts were also found in the building and among its debris.

The Torah scroll was hidden by Jews almost 80 years ago in the ghetto and used on Shabbat and Jewish holidays.

The wooden shack in the Lodz Ghetto where the Torah scroll was found.

“This is a historical finding and a rare piece of life from the ghetto that survived until today,” Krieger said. “The Poles continue to suppress our history. These lone wooden shacks left on the Lodz Ghetto streets were going to be demolished and the only evidence left in Poland of what happened in the Holocaust was going to be erased.”

Considering that the Lodz Ghetto was liquidated in 1944 after having held over 164,000 Jews, it is nothing short of a miracle that this Torah scroll was discovered still intact after all these decades. Kol hakavod to Rabbi Krieger of the Shem Olam Holocaust Institute for rescuing this Torah scroll, such a priceless part of our heritage.

Moving now to something as completely different as one could imagine from the ordeals of the Shoah, here is a beautiful heart-warming story from Israel. Yossi Goldin writes of his experience on El Al:

I am not someone that posts on Facebook often, but my recent experience on an EL AL אל על flight was so special that I wanted to take the opportunity to thank them publicly.

I flew into New York Monday morning for what was meant to be a two week trip for work for Midreshet Torat Chessed. On Monday afternoon I received a call from my wife back in Israel (who was pregnant in her 8th month) that her water broke and she was going to labor. I immediately went back to JFK airport and was able to book a seat on the flight that night to return to Israel. When we took off from JFK at 11:50pm that night, my wife was in the middle of labor, and I had no idea what was going to happen.

With no wifi on the flight, I wasn’t sure what I could do- I decided a few hours into the flight to approach one of the stewardesses, and after explaining to her that my wife was in labor (and clarifying that she was NOT on the plane) I asked if there was any part of the plane that had wifi so that I could check for any updates. She told me that there was no wifi on the plane but she asked for Shifra’s information- including what hospital she was in, her phone number- and said she would see what she can do.

I sat back down and began davening, not really sure what to expect. Ten minutes later the stewardess comes back to me with a tray that had on it a glass of wine and some chocolates and said “Mazel Tov, your wife had a baby boy- and everything is doing well!!”. Apparently, the pilot from the cockpit called Shifra on her cell phone on my behalf to ask how she was doing and for any updates, and Shifra was able to update him (after a minute of being in shock at being called from the cockpit of an airplane in flight).

Needless to say, this act of chessed was extremely special for both myself and Shifra- for me to be able to be updated on what was going on, and for Shifra to know that I was able to find out. We are so grateful to the staff at El Al for going above and beyond!

What a wonderful only-in-Israel moment! And isn’t it fantastic to hear a good news story about El Al instead of the usual complaints? Kol hakavod to the pilot and crew of the El Al plane, and a hearty mazal tov to Yossi and Shifra Goldin! May we continue to hear only good news.

And since it is Rosh Chodesh Kislev today, the month in which Chanukah falls and we all overdose on sugar-loaded sufganiyot (doughnuts), it is extremely good news to lean that an Israel startup has developed a sweet protein to help cut calories (via Suzanne):

The surge in obesity levels globally – worldwide obesity has nearly tripled since 1975, according to the World Health Organization — is causing food and health companies to scramble for ways to battle the glut and the gut.

One way is to decrease sugar intake, and food companies worldwide are struggling to find ways to cut the sugar content in their products but at the same time keep them tasting good. Israel’s SodaStream, which has successfully branded its fizzy drinks as a healthy alternative to super-sweet sodas, was snapped up earlier this year by US drinks giant PepsiCo Inc. for a massive $3.2 billion in cash, as a way to contend with falling demand for sugar-laden drinks.

Now, an Israeli food tech company, Rehovot-based Amai Proteins, says it has developed sweet proteins – based on those found in plants that grow along the equatorial belt — that can be used as sugar substitutes in a range of foods including sodas, yogurts, energy drinks, protein shakes, whipped cream, chocolate, spreads and syrups. 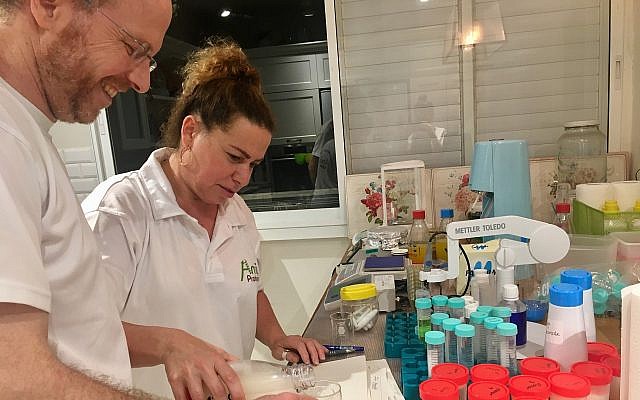 Ilan Samish, left, the founder and CEO of Amai Proteins working in his lab (Courtesy)

Sweet proteins, he explained, are up to 3,000 times sweeter than sugar by weight, with a 4-gram teaspoon of sugar equivalent in sweetness to less than 2 milligrams of a sweet protein.

“These ultra-sweet proteins… bind to the sweet-receptor on the taste bud just like sugar but are then digested just like a protein, thus not causing an insulin response, not presenting calories and, unlike other sweeteners, they have no effect on the microbiome, liver and kidneys,” Samish said.

However, these jungle-made proteins in the jungles are produced in small amounts, and they are not all identical. They also have an aftertaste, Samish said.

Samish and his team of computational protein designers studied the DNA makeup of the natural proteins and recreated it. They also redesigned it to decrease the aftertaste and to be able to make it in greater quantities.

The company, which began in The Kitchen Hub incubator of Israeli-based foodmaker Strauss, has already created a protein-sweetened soda for SodaStream with 50% to 80% less sugar content in a variety of flavors, including lemon, orange and coconut. Amai is also collaborating with Danone and PepsiCo, Samish said.

Wow, what a brilliant development! With so many overweight people, and diabetes becoming a scourge of Western society, this new protein has the potential to solve all these problems at one go. Kol hakavod to Ilan Samish, the founder and CEO of Amai, who developed this protein. I am sure we are looking forward to noshing on doughnuts with no effect on our sugar levels or our waistlines!

With this sweet thought in mind I wish you all Chodesh Tov and Shabbat Shalom!