Despite it all – Good News Friday

As has happened so many times recently, I had my doubts about posting a Good News Friday installment today. I am still simmering over this week’s mini-war and the fiasco of the ceasefire, and the last thing I wanted to do was find some good news.

But davka because of that, I came to the conclusion that we (or at least I personally) need a break from the stress and enjoy some good news before Shabbat.

While there is currently no cure for either Type 1 or Type 2 diabetes, a range of breakthrough Israeli medical technologies is changing the rules of the game for diabetics.

Although diabetes is often associated with insulin injections, Jerusalem-based Oramed Pharmaceuticals has developed an innovative oral insulin capsule that transforms injectable treatments into oral therapies. The capsules, for both types of diabetes, are currently in advanced Food and Drug Administration clinical trials.

“We have something that can help hundreds of millions of people around the world,” Oramed CEO and cofounder Nadav Kidron told The Jerusalem Post.

Together with Nobel Prize winner Prof. Avram Hershko, they developed a previously-unimaginable solution that enables proteins, such as insulin, to be delivered orally and intact into the liver – the organ that regulates the secretion of insulin into the bloodstream.

“Rather than treating excessive glucose in the blood, we shut off production from the source. This is a much more physiological way of treating diabetes. The vision is that the new paradigm of treating diabetics is by diet, exercise, oral insulin and, eventually, injectable insulin,” Kidron said.

“There should be a world that will push back the point where patients are insulin-dependent, which is also far more expensive. The dream is to see smiling kids and adults because they can have a better lifestyle which can cost less, and both they and society will be much happier.”

In November 2015, Oramed signed licensing and investment agreements worth up to $50m. with Chinese investment and incubation company HTIT for exclusive rights to market the company’s insulin capsules in China, Hong Kong and Macau. Kidron anticipates that their product will be registered in China before the US.

This is excellent news for diabetics, and what’s more, the company is now working on transforming other injections into pills. This will transform people’s lives. Kol hakavod to Nadav Kidron and Prof. Avram Hershko on the brilliant innovation.

Another Israeli biomedical breakthrough was revealed this week as researchers at Tel Aviv University said they have invented the first fully personalized tissue implant which will prevent rejection (via Reality):

Researchers at Tel Aviv University say they have invented the first fully personalized tissue implant, made up of a patient’s own materials and cells, paving the way to engineering a variety of implants from just one small fatty tissue biopsy and making the risk of an immune response to an organ implant “virtually disappear.” 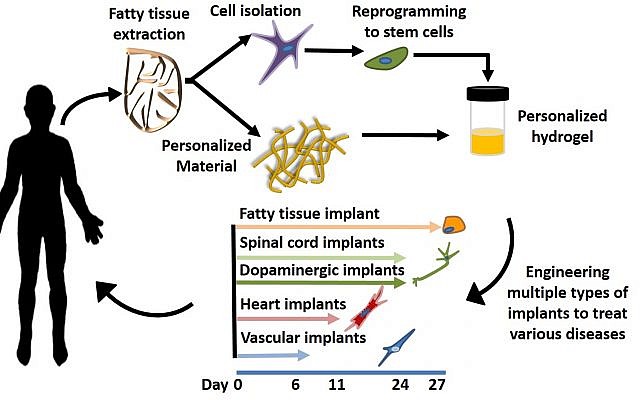 A small piece of a fat biopsy from a patient is engineered to become any type of tissue implant for regenerating defective organs, including the heart, spinal cord and brain, with minimal risk for rejection (Prof. Tal Dvir’s lab; Tel Aviv University)

In their study, the researchers took fatty tissue from patients’ stomachs and separated the cells from other, acellular material. The researchers then manipulated the cells to transform them into pluripotent stem cells — cells that can develop into any kind of cells, from neurons to cardiac cells to spinal cord cells.

Then they took the acellular material and transformed it into a personalized hydrogel, a biomaterial that supports cells and allows them to form a functioning tissue. Combining the hydrogel with the newly created stem cells, the scientists then created personalized tissue implants of many types (spinal cord, dopaminergic, cardiac and fatty tissues). The materials could then be implanted in animals, showing minimal immune response.

“Until now researchers used synthetic materials or animal materials to support the stem cells to create the tissue for the implant,” said Dvir in a phone interview. But such implants can induce an immune response that leads to rejection of the implanted tissue. This means that patients receiving engineered tissues or any other biomaterial-based implants — either synthetic or from other animals — are treated with immuno-suppressors, which themselves endanger the health of the patient.

For this reason, said Dvir, the development of such implants is still in the experimental phase only.

“In our case, we rely on the patients’ own cells and their own materials, without triggering any adverse response from the immune system,” he said. “We create patient-specific cells and personalized hydrogels, and we showed, in mice, that there was no immune response after implantation.”

The system can be used to engineer cardiac, spinal cord, cortical and other tissue implants to treat different diseases, said Dvir. “Since both the cells and the material used derive from the patient, the implant does not provoke an immune response, ensuring proper regeneration of the damaged organ.”

“We could create and implant cells that can help regenerate spinal cord cells, or those of an infarcted heart or brain trauma,” he said. To combat Parkinson’s, patients could be implanted with neurons that secrete dopamine.

This is a fantastic development with enormous potential to save thousands of lives every year, plus making the lives of transplant recipients so much easier. Kol hakavod to Prof. Tal Dvir and the entire research team at Tel Aviv University.

Another fascinating Israeli development, this time in the technological field, is an automated grocery-pricing system powered by artificial intelligence that will prevent food wastage due to expiry dates:

About half of all the food produced in the world is wasted every year.

That’s about two billion tons of food, worth billions of dollars. It’s a shocking statistic, and at the end of the day, it’s not just the supermarkets or food producers that pay the price – it’s all of us. A hungry planet with limited resources, a high carbon footprint, and rapidly changing climate cannot afford to throw food in the bin.

A new Israeli startup, Wasteless, hopes to help cut some of this waste with a new AI system that will transform how supermarkets approach food expiration dates. “Food expiration dates are the main cause of retail waste and the cost is tremendous, both to business and to the environment,” says Oded Omer, co-founder of Wasteless. “Food is the single largest product in landfills, where it emits extremely harmful gases, including methane.’’

Wasteless, which was founded in 2017, has developed an artificial intelligence (AI) technology that can offer customers a variable pricing system based on a product’s expiration date. A carton of milk that is set to expire in a few days will cost less than one due to expire in 10 days.

It sounds simple, but the technology behind is not. The Wasteless pricing engine employs a branch of machine learning called reinforcement learning, which automatically maps inventory stock and time of day into a series of optimal prices.

The proof in the pudding comes from a Wasteless pilot project done in partnership with a leading Spanish retailer to assess whether the technology could help improve the key critical elements in the retailer’s operations.

The data collected indicated that Wasteless technology slashed one-third of food waste from the retailer’s supermarkets, while producing a 6.3 percent increase in revenue.

What a brilliant idea! Food wastage is practically a crime in my eyes, with so many poor and hungry going without enough food. If this program can help, and bring a profit to the supermarkets too, then it deserves a medal! Kol hakavod to Oded Omer and his Wasteless company. May they go on to greater success.

And finally, something completely different, a sweet story about a British musician who made aliya, and davka in Israel his songs became a big hit on the international stage. (via Hadassah):

A small story about faith and music: Three weeks ago, a new single arrived to our friend in Kan 88, an acoustic version of Alex Clare’s Three Hearts song. They began to play it, and immediately afterwards they received inquiries about the song and the singer. When they looked into the matter, they discovered that he was a British-born Jew and he actually lived in Israel, so they invited him to the studio and realized that this was an amazing story!

This is what the radio station people say: All his life he was attracted to music and tried to turn it into his profession. A few years ago the big and important record company Island offered him a recording contract and he agreed on one condition: he does not appear on Saturday (Shabbat). They agreed to the terms but with success came proposals for large performances on weekends and Alex continued to refuse. After he refused to perform on Sukkot and be the warm-up for (the famous singer) Adele, they fired him. Alex saw it as a sign and decided to abandon the music world and try to realize another dream, to immigrate to Israel and study in yeshiva.

While studying in a yeshiva in Jerusalem, he received a phone call from software giant Microsoft asking permission to use his song Too Close for commercials. Alex gave them permission, but since this had happened in the past with other series and advertisements he did not get too excited and did not think anything would come of it. But a few days later a call came from another company, Universal Records, which was the distributor of his music in Germany. They told Alex that he had to get to Germany quickly because the song reached the first place in the charts after everyone heard the song on the commercial and asked to hear it on the radio. He left everything and went on a three-year tour, and the song continued to grab the charts all over Europe.

So Alex still lives here in Israel. He does not appear on Shabbat, but continues to perform around the world and maintain a successful career and we are happy that he came to the studio to perform his song, Too Close. The full story from Alex and the full interview.

What an inspiration Alex is, that he stood up for his principles and for the glory of Shabbat and would not compromise his religious beliefs. And yet he still manages to maintain a musical career. Kol Hakavod to Alex Clare who has shown us that you can follow your dream and still remain a Shabbat-observing religious Jew.

May the music and his love of Shabbat flow with us into our own Shabbat.

Shabbat Shalom to all, wishing everyone a quiet, peaceful and safe Shabbat.

7 Responses to Despite it all – Good News Friday