I haven’t posted a proper Good News Friday post for a couple of weeks, so it’s time for a catch-up.

First we have another amazing archaeological discovery which, while dug up already in the 1930s, was only discovered inside the trove recently. The artefact is a flax wick for lighting lamps according to Jewish law:

An extremely rare 1,500-year-old flax wick was discovered during a recent examination of mothballed artifacts unearthed in the 1930s in the Negev town of Shivta. 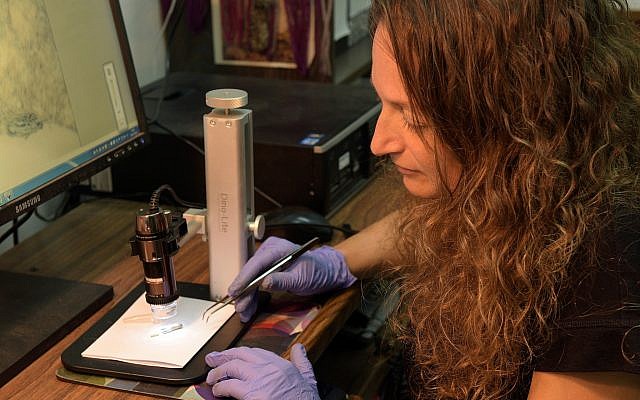 The minute wick, which was preserved in arid conditions inside a bronze copper tube used for lighting a glass Byzantine-period lamp, is one of only a few discovered in the world, according to Dr. Naama Sukenik of the Israel Antiquities Authority.

Microscopic analysis by Sukenik showed that the wick was made of linen, a cloth derived from flax. Sukenik said that only two other examples of flax wicks were discovered inside similar tubes in Israel and they are very rare finds around the world.

“They are very small and deteriorate quickly underground. Furthermore, it could be that most were burnt — that was their purpose, after all,” said Sukenik.

Flax was cultivated in the Levant for thousands of years and people in the region were very familiar with its uses, she said. The earliest examples of flax garments and thread were discovered in Nahal Hever, and date from some 10,000 years ago, she said.

In addition to mentions in the Bible, the famed Gezer inscription, circa 100 BCE, also speaks to the cultivation of flax. Sukenik noted that flax’s use as a wick is attested in Mishnah Shabbat, Chapter 2, which is read as part of the Friday night liturgy by Jews around the world. The mishnah deals with what material is acceptable for lighting lamps on Shabbat, and combed flax (versus uncombed flax) is deemed worthy.

The mishnah, which came slightly before the Byzantine-era wick, is “a mirror for the reality of the living people. Here we have a text that is saying what is good for wicks, and flax is found there. It doesn’t smoke or stink, it gives off good light,” she said. Flax wasn’t cultivated in the Negev and the cloth was likely brought from farther north in the country through trade, said Sukenik.

What an “illuminating” discovery! This little country of ours is a gigantic treasure trove of history. Kol hakavod to Dr. Naama Sukenik for her wonderful discovery.

From one extreme to the other, let us move now to the modern day, where a brilliant technology is being developed in Israel to treat obesity in a non-invasive manner:

Israeli startup Nitinotes is developing a technology that will bring the long-term benefits of bariatric surgery to individuals with a lower BMI, while avoiding the dangers of surgery and potentially at a lower cost.

Nitinotes’ Endozip is an automated suturing system performed via endoscopy – through the mouth, rather than under the knife – to connect the anterior and posterior walls of the stomach.

“The knife will become unused in a decade or two. All procedures are going to be noninvasive,” Nitinotes CEO Raz Bar-On tells ISRAEL21c.

I admit it still sounds fairly gruesome but if it saves patients the necessity of going under the knife, that is good news for eveyone. Kol hakavod to Raz Bar-On and his Nitinotes company!

And now to conclude this week’s installment, here is a wonderful, heart-warming story of closing the circle of a friendship which carries on through 5 generations (via Hadassah).  My translation follows the post below:

A Chassidic story happened to us yesterday.

I sat at a playdate with a friend of Uri’s from the daycare, and I was nattering with her mother about things that mothers natter about.

So this was the story: the wig-maker Chanchi Rosenfeld arrived in Auschwitz with her daughter, my grandmother Leah, and five women who worked in her wig factory. And they formed a group of mutual support and helped one another to get things like food and woolen yarn for socks and work.

And they survived. All of them.The Jewish community in Chust was almost completely destroyed, but its wig factory survived intact … They would meet once in a while, a reunion of very Hungarian and very intertwined Auschwitz survivors, and we passed their story on to the family person to person already for five generations.

And five generations ahead, Chanchi Rosenfeld’s great-great grandchild began to go to the daycare that sits in the Ginat Ha’Notrim in the Katamonim in Jerusalem, where he became very friendly with the great-great-granddaughter of Piri Kertz, and they became such good friends. That’s the only way I can get him to dress in the morning, let’s go to the daycare and play with her. And if only I could go back to those days in Auschwitz when they crowded together into the bunk to warm up, and tell them that the prophecies were true and that the day would come and the streets of the city would be filled with boys and girls playing in their streets…

This story has brought tears to my eyes. It is such a typically Jewish story, and an Only in Israel story. Where else could two strangers meet in a park and discover their grandmothers survived the Shoah together in Auschwitz? I am sure the grandmothers are smiling together up in Heaven as they watch the 5th generations playing in the streets and parks of Israel.

And just one more item before I close. Last week, the IDF soldier Natanel Felber was critically injured by a terrorist at the Givat Assaf junction. He is still in critical condition and his parents are asking us all to keep him in our thoughts and prayers.

Education Minister Naftali Bennett has passed on the parents message to us:

This coming Shabbat all of us, all the people of Israel, secular and religious, will pray for the seriously wounded soldier Netanel Felber, who is fighting for his life.
**
I recently visited Netanel, critically wounded in the attack at the Givat Assaf junction.
His parents, Joe and Judy Felber, immigrated to Israel from the United States with their children Daniel, Adina and Netanel to fulfill the Zionist dream.
A charming, idealistic Zionist family.
**
Netanel’s condition is very difficult due to a severe head injury.
The doctors are working to treat him, but in truth, with such injuries the options are limited.
**
So here is a request from Netanel’s parents:
This coming Shabbat, let us all, all the people of Israel, secular, religious, and ultra-Orthodox, pray together for Netanel.
**
A word about Natanel: He is a happy young man, with a huge heart, who for four consecutive years, every Shabbat, went to a nursing home to pray and visit the elderly residents.
Always helping everyone, always and doing good.
Now it is our turn to try for him.
**
So this coming Shabbat everyone will pray for Natanel, son of Shayna Zipporah.

May God grant him a full recovery.
**
Please keep him in your thoughts and share

May Hashem send a refuah shlema to Netanel ben Shayna Zipporah along with the other wounded victims of last week’s attacks:

May we all have a quiet, safe weekend. Shabbat Shalom to everyone.