It is election season in Israel with all the attendant empty promises, scandals, and political jockeying.

Bayit Yehudi head and Education Minister Naftali Bennett took his deputy, Justice Minister Ayelet Shaked, and left the party, forming a new party simply called “The New Right”. I have not been able to fathom the reasoning behind this split, since Bennett was the head of the party and could have taken it in any direction he wished. Maybe he felt that the old guard in the party were not letting him have his way. 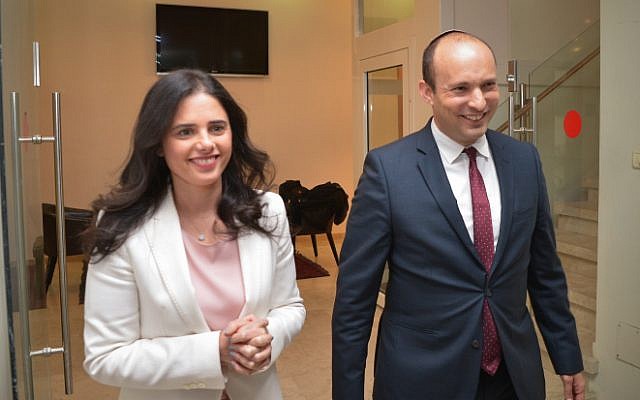 But it was an act of betrayal in the way he abandoned the party that had taken in him and Shaked. He abandoned them a mere 3 months before the upcoming elections, leaving them practically no time to to recuperate and consolidate under a new leader, or set a new platform. If he had intended to leave all along, he should not have done so so soon before the elections.

On top of this they left the party with big debts, and they timed it just right that they don’t bear the debt but leave the rest of the party to cope. That was a very unethical thing to do. As the rabbis would say “it’s kosher but it stinks”.

I’m really upset because I loved Ayelet Shaked in the Justice Ministry and thought she performed brilliantly, quietly reforming the judiciary, pushing through her very unpopular (with the judges) agenda. I fear she has put paid to her political career by leaving with Bennett. We shall see.

Meanwhile yet another ex-general, former Chief-of-Staff Benny Gantz has set up his own party, the Resilience Party. What does it stand for? What are its aims? No one knows because Gantz has kept quiet. Yet despite this lack of knowledge he is polling at 13 seats in the new Knesset, which just shows how Israelis prefer personality over politics. This is not a good idea in a democracy. 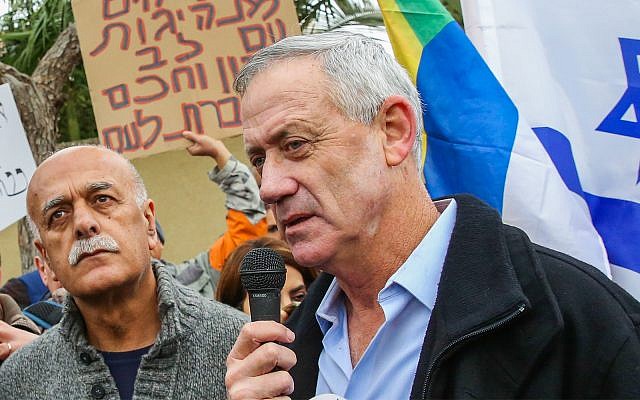 This week Gantz finally opened his mouth and announced that if elected he will work to amend the Nationality Law to help the Druze community:

Monday’s statements were met with immediate criticism from both the right and left of the political spectrum.

The Likud party said that Gantz’s comments showed he was in the same ideological basket as Hatnua chief Tzipi Livni and Yesh Atid chair Yair Lapid.

“When Ganz attacks the national law and Tzipi Livni congratulates him for it, everyone knows the obvious: Ganz is left, just like Lapid,” the party said in a statement.

The New Right party echoed previous attempts by right-wing politicians to label Gantz a “leftist,” saying that his comments “reveal his true stance.”

“Gantz’s first statement in politics makes very clear he is a member of the left.‬ ‪The nation-state law was a historic achievement that restored the state’s national, Jewish, and Zionist character, in the face of its continued erosion by the Supreme Court,” the party said.

But Tamar Zandberg, chair of the left-wing Meretz party, said Gantz’s comments didn’t go far enough and were in fact a boon for the right.

“The nation-state law does not have to be fixed,” she said in a statement, arguing that it should instead be fully repealed and charging that “the very discussion of the wording of the law is the true victory of the right.”

There was more controversy as it emerged that Benny Gantz was proud of his record when Chief of Staff in risking IDF soldiers’ lives in order to save Gazan lives:

srael’s Channel 20, which is affiliated with Israel’s right-wing, on Sunday cited a speech Gantz carried in 2015, shortly after his discharge from the IDF, in which he said that during the 2014 Operation Protective Edge, he risked Golani brigade soldiers for fear of harming the residents of Shuja’iyya.

Ganz referred to an event that included the Golani Brigade at Wafa Hospital in the Shuja’iyya neighborhood of Gaza City, and said, “I was there. During the battle, Golani was situated below the hospital there was fire from inside the hospital. We warned the hospital directors in advance. We made sure no one was inside. I was there myself, and yet I told the commanders: Wait.”

“Once again, we asked the directors to let everyone out, and only then did I give permission to attack,” the former chief of staff said. “We did not harm civilians, but we endangered Golani soldiers for this purpose.”

Gantz’s “humanitarianism” towards the enemy did him no favours in any case:

Despite Gen. Gantz’s best intentions, the UN, US, and UN condemned the IDF’s tactics in that battle, and said they were ” particularly appalled by the human cost of the Israeli military operation in Shuja’iyya,” which they found “indefensible.”

For this reason alone he should be unelectable, but with Israeli politics, anything is possible.

As for the Zionist Union party, previously the Labour Party, it collapsed into total disarray, almost oblivion, as the party head Avi Gabbay announced its break-up with Tzippi Livni’s faction on live TV without giving Livni any heads-up:

Labor Party leader Avi Gabbay shocked the MKs of the Zionist Union faction on Tuesday when he announced he was breaking up the partnership with the Hatnua Party of Tzipi Livni. 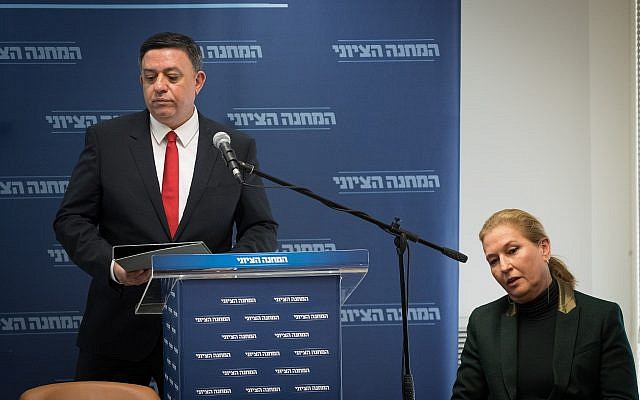 Gabbay spoke with Livni who was sitting next to him showing a stern face. It was clear that neither she nor any of the MKs were told of the decision in advance. Gabbay said he accepted the request of former Labor leader Isaac Herzog in July to keep the partnership going and faced massive criticism inside Labor when [he] accepted Livni’s demand to be opposition leader, but now decided to go in a different direction.

A source close to Livni said Gabbay’s press conference preempted what would have been a fight about the Zionist Union’s campaign strategy. The source said Gabbay demanded that the campaign be all about praising him and not at all about separating from the Palestinians.

In the Labor Party meeting after the announcement, MK Eitan Cabel complained about Gabbay’s behavior and said he should have consulted with Labor MKs before making a decision that could harm their political future.

But Labor MK Shelly Yacimovich endorsed Gabbay’s decision, saying the partnership did not work and that it was clear Livni had never accepted his leadership.

“Apparently, even Livni is too left-wing for Gabbay,” said Zandberg, who called on the Left to join Meretz.

Science and Technology Minister Ofir Akunis (Likud) said Gabbay’s decision proved that “every dirty, opportunistic political deal is doomed to last only one term.” He said he cannot wait to see which party Livni will join next, breaking a record for shifting among five parties in 10 years.

The disgraceful politicking, cults of personality and all-round unethical behaviour that we’ve seen so far in this Israeli election campaign put us to shame.

I’ve been comparing the political shenanigans in Israel to what has been going on these past few weeks in Britain, with the Brexit imbroglio and Prime Minister Theresa May’s difficulties in maintaining her coalition.

Despite the huge divides between the two major parties, the discussions in Parliament are an example for all of us, particularly for Israelis. We Israelis  pride ourselves on our noisy democracy. Well, there was hardly anything noisier than what we saw in last night’s no confidence vote, prompted by Labour leader Jeremy Corbyn who jumped at the chance to bring down the government after Theresa May’s Brexit deal was roundly rejected by Parliament on Tuesday night.

Just watch these videos which show how democracy ought to play out, rather than the humiliating scandals which have been informing Israeli politics these past few weeks.

Here is Theresa May addressing Parliament before the vote of no confidence:

And here is Conservative MP Michael Gove, who was on fire as he slammed Jeremy Corbyn. He was brilliant as he called out Corbyn’s antisemitism and indeed his anti-Britainism, while backing other Labour MPs who had criticised Corbyn’s leadership:

Why can’t we have debate like this in Israel? Why is our Knesset half empty when the Parliament is packed to the gills?

Elections are approaching for Israel on April 9th, and Theresa May’s government is still shaky, while Brexit is turning out to be a huge mess. But both countries are lively democracies and both have a lot to learn from each other.

The time is now for Israel to learn polite public speaking and behaviour from the British.