On Friday I made brief mention of the horrific murder of Ori Ansbacher Hy’d, a 19 year old National Service volunteer who was raped and murdered by a Palestinian terrorist who admitted he committed the heinous offence due to his wish to become a martyr.

Arafat Irfaiya, a 29-year-old man in Israeli custody for raping and brutally murdering 19-year-old Ori Ansbacher of Tekoa on Feb. 7, told Shin Bet security service interrogators that he wanted to be a martyr and left his home in Hebron that day looking to kill a Jew.

According to a report on Israel’s Channel 13 news, Irfaiya sprinted across the security border separating between pre-1967 Israel and Judea in order to evade detection by security cameras and came upon Ansbacher in the forest.

“I entered Israel with a knife because I wanted to become a martyr and murder a Jew,” Irfaiya reportedly said. “I met the girl by chance.”

Channel 13 reported that Irfaiya had served time in prison for security-related crimes in the past, namely attempting to enter the Temple Mount in Jerusalem armed with a large knife. He allegedly told police that if he were released, he would “come back here with a knife.”

Irfaiya was arrested near Ramallah in southern Samaria. His house in the Judean city of Hebron has been prepared for demolition, in accordance with Israeli policy for terrorist murderers.

The horrific nature of the crime has prompted calls throughout Israeli society for the death penalty for the murderer.

But I don’t want to focus any more on the terrorist. There is plenty in the media if you want to learn more about him or his crime. I want to concentrate on Ori, the beautiful young girl who could have been any of our daughters.

Ori’s mother Na’ah, in a moving display of grace under pressure, asked the public to “add light to the world” (Ori’s name means “my light”): 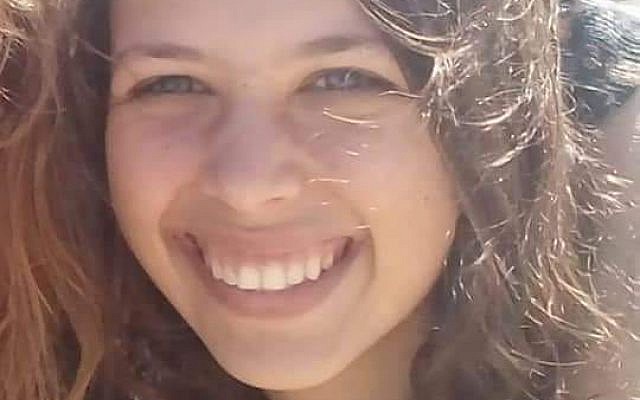 The mother of Ori Ansbacher on Saturday called on the public to carry out acts of kindness in order “to add light to the world” in memory of her daughter, who was brutally murdered in Jerusalem on Thursday.

As she spoke, rallies in memory of Ansbacher were taking place in Tekoa, Jerusalem, Tel Aviv and Hebron Saturday night, as the murder continued to send shockwaves through the country.

“It’s important for us that the world know who Ori was,” she said. “Ori was a child of light, adding so much light in the world. She cured broken hearts wherever she went, be it with her girlfriends, the boys and girls she worked with in her national [volunteer] service, even people she did not know.

“Sometimes when I spoke with her I felt that it was not a conversation between a mother and a daughter, but that she was my teacher,” Na’ah Ansbacher added. “Recently she talked a lot about compassion — that she wanted to be compassionate toward realities that were difficult for her, with people who were hard on her.”

Na’ah Ansbacher said that her daughter had been a poet whose work “brought expression to who she was in the world.”

“Ori taught us to marvel at the sunrise, the sunset, the blooming, the sun, the rain, the world,” she said.

In Jerusalem, mourners gathered at Zion Square in the center of the city to light candles and sing songs in memory of Ansbacher.

In Tekoa, a settlement of some 3,000 people southeast of Jerusalem, several dozen people gathered at a central traffic circle to hold a vigil in memory of Ansbacher.

And in Hebron, dozens of people chanted “we will not be silent” outside the home of Arafat Irfaiya, 29, who was arrested Friday as the prime suspect in the murder. 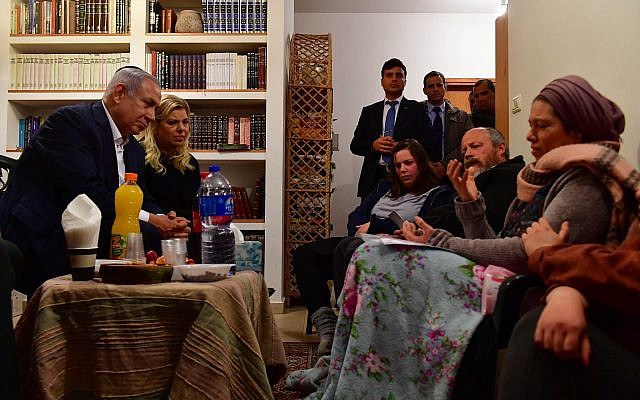 Hundreds of youth, many of them who knew Ori Ansbecher HY”D well, gathered last night near the place where she was murdered, at Ein Yael. Here are a few things that I heard there: The organizers of the Bnei Akiva youth movement explained that they feel like Jerusalem was violated and made dark, and therefore we must gather there in order to sanctify and light it with soulful songs and prayers. Rabbi Avi Bildstein, the rabbi of Teko’a, the community in which Ori lived, said that in the weekly Portions we read about the most antithetical reality – about the building of the Mishkan (Tabernacle), about global perfection, about connecting all the good _middot_ (character traits) that we have into one place. This is our task.

Israeli youth gather in a vigil n memory of Ori Ansbacher Hy’d at Ein Yael, the place where she was murdered

Ori’s friends, who shared with her the same apartment in the National Service, asked of the audience something:
“Every evening, at the end of the day, Ori had a custom. She used to gather all of us in a circle and ask us to do something that she called ‘a thorn and a flower’. Every one of us would tell all the others about something disturbing and annoying that happened to her that day, about a ‘thorn’, and every one would tell about something good that happened to her during the day, about a flower. It instilled in us a great sense of proportion. Now, since the murder, the apartment is empty without her. Everything seems full of thorns. But we are sure that Ori would have wanted us to make an effort and find some flowers as well. We ask of whoever can do this, to adopt this custom.”

My heart breaks when I read this eulogies, as these young people remember their friend with a pure soul full of light. My own granddaughter went out with her friends to the crossroads near their school to paint the road barriers, just to do “something good” in memory of Ori, rather than just to sit in school and be miserable.

That is the ripple effect of Ori’s sweet character on our young people, and on our entire society.

The vicious murder affected even Palestinian society. In great contrast to the usual adulation of Palestinian terrorists and the celebrations at the murder of a Jew, Palestinian groups are steering clear of the murderer, albeit because he raped her:

Palestinian terror groups and the Palestinian Authority appear to have quietly renounced the confessed murderer of Israeli teen Ori Ansbacher because he also allegedly raped her.

Palestinian terror groups usually laud and embrace the killers of Israelis, while the PA and affiliated organizations such as the PLO and Prisoners Club finance their legal defense and support them and their families with stipends and grants.

But, Fares explained, if the rape allegation is confirmed, “then from our perspective this becomes a criminal case. We’re against the idea that anyone who commits a criminal act can then try to cloak themselves in the nationalist flag.”

Irfaiya is currently represented by the Israeli public defender’s office.

As yet, Irfaiya’s family has not asked for a Palestinian-funded legal defense, Fares said.

Neither Hamas nor Islamic Jihad had praised or otherwise acknowledged Irfaiya’s crimes as of Tuesday afternoon, an unusual silence for the terror groups following the murder of an Israeli by a Palestinian.

Meanwhile, a senior member of Fatah serving a term in an Israeli prison told Haaretz that he condemns Irfaiya’s act. He said he and his compatriots in the prison had appealed to the Palestinian Authority not to pay Irfaiya a salary or fund his defense.

“This sort of behavior is completely unacceptable to us; someone who does this sort of thing isn’t human,” he said. “After all, if an Arab girl had been there, he would have done the same thing to her. There’s nothing nationalistic about his deeds. His act shames the Palestinian people and we are shocked by it and share in the family’s sorrow.”

He added: “Even if there was no rape, a murder like this is unacceptable. The victim wasn’t a soldier, and this wasn’t wartime. If you want to be a hero, you don’t go and murder an innocent woman who went into the woods to read a book.”

He said Irfaiya could be placed in the ward reserved for Hamas prisoners, as Fatah-affiliated prisoners “will never accept someone like that here. The man should be sent to the criminal ward and be punished for what he did to this woman. If we get hold of him, no one will be able to prevent him getting hurt.”

I admit I am very surprised, in a positive way, at this reaction. The murder of a young woman has never seemed to bother Palestinian terrorists before. Was it the fact that he committed rape too? Or is Palestinian society slowly rejoining the human race?

Another positive sign was a group of Palestinians who paid a shiva call to the bereaved Ansbacher family:

A group of around 30 Palestinians and Jews affiliated with the NGO Tag Meir paid a consolation visit to the home of terrorist victim Ori Ansbacher in Tekoa on Tuesday.

“I wanted to comfort the family and let them know that killing Jews is no less awful than killing Palestinians,” said Ragi Sabeetin from Hussan in the West Bank. “When there is death, we all suffer.”

Hussan is 12 km. west of Tekoa, where the Ansbachers live.

Tag Meir helps fights against hate crimes, racism, terrorism, and price tag attacks, and encourages tolerance and peace.
Sabeetin said the family welcomed the Palestinians with open arms, and that had the visit not centered on their pain, he thinks they would have felt like friends and guests in the Ansbachers’ home.
“They were nice and calm and patient people. It hurts us all,” Sabeetin said, describing the Jews of Tekoa as his neighbors.
He said that he does not see peace in the immediate future, but he hopes that his children will one day “get through this difficult period and live in a different way.”

The group was accompanied by MK Mossi Raz (Meretz), who said “There are no words to express the anger and sorrow. I’ll do anything to ensure that she is the last victim.”

If this is the direction that Israeli-Palestinian relations are heading then this is a very good sign. If only these people are not just a very small minority.

I wish I had the eloquence to add words of comfort for the family and friends of Ori Ansbacher, indeed for all of Am Yisrael.

May Hashem comfort the family and friends of Ori Hy’d amongst the mourners of Zion and Jerusalem. May the memory of Ori Hy’d be for a blessing, and may she continue to be an inspiration for all of us.