Ilhan Omar and the Corbynisation of the Democratic Party

The airwaves and media have been filled with reports and quotes by the Somali-born US Congresswoman Ilhan Omar. The following Algemeiner article by Thane Rosenbaum summarizes the main points of the antisemitism scandal now engulfing the Democratic Party, much like it has done in the British Labour Party. In fact the parallels are so striking that the author, Thane Rosenbaum, correctly called the phenomenon “The Corbynization of the Democratic Party“:

Democrats are about to confront their very own Darkest Hour. It started with what to do with Ilhan Omar, a freshly minted Minnesota lawmaker whose views about Israel, and American Jewry, are medieval in outlook and antisemitic at their core. She’s also among the new wave of progressive candidates that now have seats in Congress.

…Congresswoman Omar, now one of three Muslims in the House, has already displayed an anti-Israel bias that barely conceals her antisemitic bigotry. On Twitter she wrote, “Israel has hypnotized the world”—back in 2012, long before she took federal office. Later she tweeted, “May Allah awaken the people and help them see the evil doings of Israel.”

Once assuming her new position in Congress, she almost instantly tweeted how American support for Israel was “all about the Benjamins baby”—a reference to the hundred-dollar bill. She later apologized for these missteps, even though she was quickly trading again in antisemitic tropes, yielding no time to fellow colleagues.

Yet, the true nature of her antisemitic attitudes was fast approaching. Before a live audience in Washington, D.C., she said, “I want to talk about the political influence in this country that says it is O.K. to push for allegiance to a foreign country.” In case her words were misconstrued, she added, “I should not be expected to have allegiance/pledge support to a foreign country in order to serve my country in Congress or serve on committee.”

That’s right: the Jewish lobby pulls the strings in Congress; Jews have conflicted loyalties, with America of lesser importance to a people with eyes only for the Middle East; and Jewish money buys influence in ways that guns, teachers and tobacco could never possibly enjoy.

Congress decided to take action with a resolution condemning antisemitism and singling out Omar by name, much like Democrats were united, recently, in their insistence to censure Representative Steve King for his racist remarks. Of course, he was a Republican and a white male, a disfavored species of politics, gender and skin tone that is, nowadays, always deemed privileged, colonialist, and presumptively guilty.

In King’s case, given the grotesqueness of his past remarks, that presumption may have been deserved.

Omar is a dark-skinned Muslim woman. Among the new progressives, assisted by their intersectional compatriots on college campuses, marginalized people of color are, generally, excused from moral accountability—apologies are never necessary, ill-chosen words are never to be retracted, hatefulness is explained away, violence conveniently overlooked.

Progressivism of this sort is, ultimately, racist in its own right—the infantilizing of marginalized groups, treating them as if they are incapable of upholding standards. Which leads to a double standard: King was irredeemably demonic; Omar was merely mistaken, immune from censure or even a mild rebuke.

Congressional Majority Whip James Clyburn suggested that Omar had the moral authority to say almost anything—more so than children and grandchildren of Holocaust survivors—since she spent part of her childhood in a Kenyan refugee camp after escaping with her family from war-torn Somalia.

Why that insulates her from charges of antisemitism was not explained.

Instead, her name was absent from a House resolution condemning hatred of all kinds, in general terms, completely ignoring why congressional action needed to be taken in the first place. There were so many objections raised by both the Progressive and Black Congressional Caucuses that there was thoughts of scrapping the resolution altogether. In the end, neither Omar nor Jew-hatred were given any special attention.

These very same leaders were surely appalled when others tried to make the Black Lives Matter Movement more inclusive by redefining it as All Lives Matter.

As the article makes clear, the situation in the US seems much more fragile and uneasy for the Jewish community than anyone could have dreamed a mere 2-3 years ago. This is due to the leftward creep of the Democratic Party as well as the rise of the extreme right. As always, the Jews have been caught in the middle.

However, just like in Britain, the United States have their righteous people too. Here is Democratic Rep. Ted Deutch calling out antisemitism in his own party:

Those who see malign intentions in anyone condemning antisemitism will say “well of course Ted Deutch will call out antisemitism. He is Jewish after all”.

So it is especially noteworthy that Meghan McCain, daughter of the late, former presidential hopeful John McCain, strongly condemned the antisemitism from all sides of the political divide, despite not being Jewish – and then ended up being victimised herself for this very condemnation, again much like what has been happening in Britain to campaigners against antisemitism.

Meghan rightly called out the hypocrisy of those who excuse antisemitism on partisan or racist lines:

“The problem is, right now, there’s pressure to support her [Rep. Ilhan Omar] within the Democratic Party because identity politics and intersectionality is something that is important to Democrats,” McCain said.

And just like Jeremy Corbyn’s supporters double down with yet more antisemitism against those calling out this bigotry, so too “intersectional”, identity politics demagogues viciously piled on Meghan McCain. Here is a revoltingly antisemitic cartoon by Eli Valley: 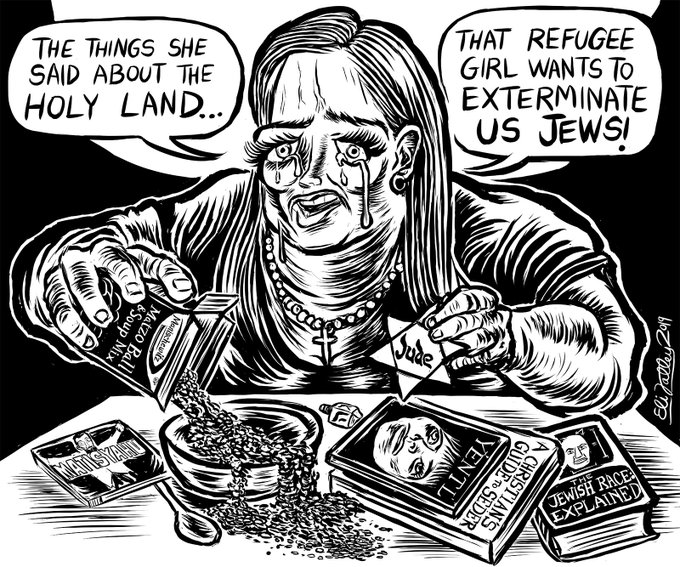 Responding to the interview, Jewish artist Eli Valley posted a cartoon of a tearful McCain holding a Jude six-pointed star, pouring matzo ball soup mix into a bowl, alongside books entitled “The Jewish Race Explained” and “A Christian’s Guide to Seder,” and other Jewish symbols.

“This is one of the most anti-semitic things I’ve ever seen. Also, this reveals so much more about you than it does me…” tweeted McCain in response to the cartoon.

Looking at the rising tide of antisemitism, partisanship and identity politics in both Britain and America, I am so glad I made aliya 40 years ago. (Yes, despite the crazy politics in this country).