This week we received some very exciting news from the days of the First Temple! A seal bearing the name of Kind Josiah’s court official was unearthed in the City of David:

A bulla (seal impression) and a 2,600-year-old stamp dating back to the First Temple and bearing Hebrew names were recently uncovered as part of the archaeological excavations of the Givati Parking Lot in the City of David National Park in Jerusalem. The dig was conducted by archaeologists from the Israel Antiquities Authority and Tel Aviv University. 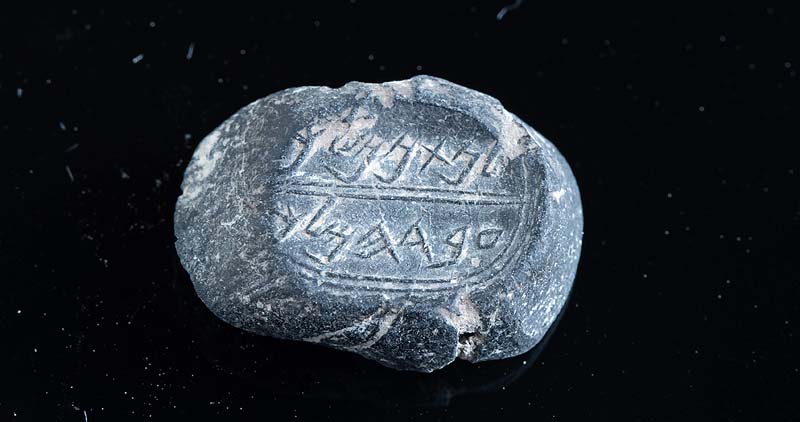 Bullae were small pieces of clay impressed by personal seals, used in ancient times to sign letters. While the parchment they sealed didn’t survive the fires that devastated ancient Jerusalem, the bullae, which are made of ceramic-like material, were preserved, leaving evidence of the correspondence and those behind them.

According to Prof. Yuval Gadot of Tel Aviv University and Dr. Yiftah Shalev of the IAA, who were responsible for the dig, the extraordinary artifacts were found inside a large public building that was destroyed in the sixth century BCE – likely during the Babylonian destruction of Jerusalem in 586 BCE.

Large stone debris, burnt wooden beams and numerous charred pottery shards were discovered in the building, all indications that they had survived an immense fire. The importance of this building can be discerned, among other things, from its size, the finely cut and dressed ashlar stones from which it was built and the quality of the architectural elements found in the layers of destruction: for example, remnants of a polished plaster floor, which had collapsed and caved into the floor below.

The stamp and bulla, which are about one centimeter in size each, were deciphered by Dr. Anat Mendel-Geberovich of the Hebrew University of Jerusalem and the Center for the Study of Ancient Jerusalem. Based on the script, she dates them to the middle of the seventh- to the beginning of the sixth-century BCE.

The seal impression, dated to the First Temple period, features the words: “[belonging to] Nathan-Melech, Servant of the King” (LeNathan-Melech Eved HaMelech). The name Nathan-Melech appears once in the Bible, in the second book of Kings 23:11, where he is described as an official in the court of King Josiah, who took part in the religious reform that the king was implementing: “And he took away the horses that the kings of Judah had given to the sun, at the entrance of the house of the Lord, by the chamber of Nathan-Melech the officer, which was in the precincts; and he burned the chariots of the sun with fire.”

The title “Servant of the King” (Eved HaMelech) appears often in the Bible to describe a high-ranking official close to the king. This title appears on other stamps and seal impressions that were found in the past. This seal impression is the first archaeological evidence of the biblical name Nathan-Melech.

Dr. Mendel-Geberovich notes that the fact that this official was mentioned by his first name alone indicates that he was known to all, and there was no need to add his family lineage.

Another stamp-seal, made of bluish agate stone and engraved with the phrase “[belonging to] Ikar son of Matanyahu” (LeIkar Ben Matanyahu) was discovered the same location. According to Dr. Mendel-Geberovich, “The name Matanyahu appears both in the Bible and on additional stamps and bullae already unearthed. However, this is the first reference to the name ‘Ikar,’ which was unknown until today.”

She believes that despite the literal meaning of Ikar which is farmer, it most likely refers to a private individual with that name as opposed to a description of his occupation. It is still unclear who this person was.

According to Gadot and Shalev, “since many of the well-known bullae and stamps have not come from organized archaeological excavations but rather from the antiquities market, the discovery of these two artifacts in a clear archaeological context that can be dated is very exciting. They join the bullae and stamps bearing names written in ancient Hebrew script, which were discovered in the various excavations that have been conducted in the City of David until today.”

They also suggest “the discovery of a public building such as this, on the western slope of the City of David, provides a lot of information about the city’s structure during this period and the size of its administrative area.”

Doron Spielman, Vice President of the City of David Foundation which operates the City of David National Park added: “This is an extremely exciting find for billions of people worldwide. The personal seal of Natan-Melech, a senior official in the government of Josiah, King of Judah, as described in the second book of Kings. The ongoing archaeological excavations at the City of David continue to prove that ancient Jerusalem is no longer just a matter of faith, but also a matter of fact. It is truly fascinating to watch how archaeologists have uncovered more than twelve layers of Jerusalem history in what used to be a parking lot until just few years ago.”

Sivan Rahav Meir comments on this wonderful find and puts it into perspective:

Eavesdropping, polls, press conferences – seemingly, the important headlines take place in the realm above the ground. However, yesterday we received a dramatic reminder from the bottom of the earth. Two rare discoveries were unearthed in the City of David in Jerusalem: A stamp seal on which the inscription “[belonging to] Ikar son of Matanyahu” (LeIkar Ben Matanyahu) is engraved in ancient Hebrew letters, and a bulla (seal impression) on which the inscription “[belonging to] Nathan-Melech, Servant of the King” (LeNathan-Melech Eved HaMelech) was written (this name is mentioned in II Kings). The researchers didn’t hide their excitement yesterday and said that these findings are “rare and exciting”: These discoveries are 2,600 years old (!) and were found in a burnt structure that had probably been ruined during the destruction of the First Temple, and was now discovered in Hanyon Giv’ati. The estimation is that these are relics from the Babylonian attack on Jerusalem, following which, as we know, we were exiled. Did that Nathan-Melech, servant of the king, ever imagine when he fled from the Babylonian army that a day would come and we would find his personal seal this way?

We have returned home, and from time to time we receive thousands of years old greetings, which remind us how our story is greater and more ancient than what we imagine it to be.

These details about this extraordinary find, despite the bullae’s tiny size, are riveting! The words inscribed on that tiny seal bring the Tanach alive. No longer can people claim that the Bible is merely a fairy tale or legend. Here is the living proof that confirms our history, the Jewish people, in this Land of Israel.

Kol hakavod to the archeologists and researchers who are working so hard to uncover our amazing history and bring it to life.

From the distant past we fast forwrad to the very advanced present day and Israel’s moon shot. This week the Israeli spacecraft Beresheet succeeded in being “captured” by the moon’s gravitational pull:

SpaceIL’s engineering team and Israel Aerospace Industries (IAI) this evening at 5:17 p.m. Israel team conducted the most critical manveuver to date of Beresheet’s journey to the moon – the Lunar Capture. This maneuver enabled the spacecraft to be captured by the moon’s gravity and begin orbiting the moon – and with the moon, orbiting the Earth. 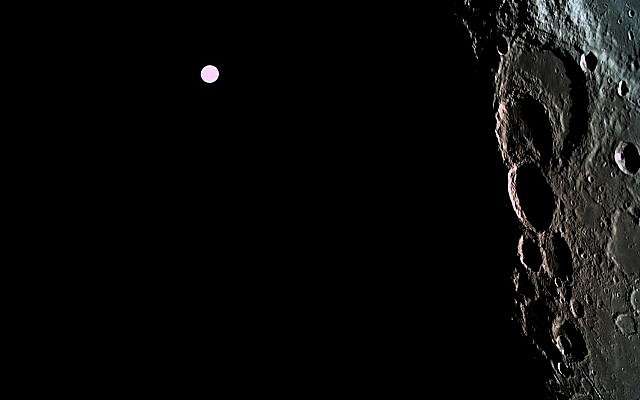 A picture taken by the Beresheet spacecraft of the moon’s surface with the Earth in the background on April 5, 2019. (courtesy Beresheet)

Today’s maneuver moved the spacecraft into an elliptical orbit around the moon, with the closest point (perilune) 500 km to the moon, with the farthest point (apolune) 10,000 km from the moon. Unlike the longer orbits around the Earth, Beresheet’s first lunar orbit will last 14 hours. Before it lands on the moon, each orbit thereafter will take only two hours. At the beginning of this week, Beresheet reached, for the last time, the closest point to Earth in its last Earth orbit, only 1,700 km, and continued on course to the point where it could join the lunar orbit, 400,000 km from Earth.

At 5:18 p.m. Israel time the spacecraft’s engine activated for six minutes, and reduced its speed by 1,000 km/hour, from 8,500 km/hour to 7,500 km/hour, relative to the moon’s velocity. The maneuver was conducted with full communication between Beresheet’s control room in Israel and the spacecraft, and signals in real time match the correct course. In the coming week, with expected intense engineering activities, many more maneuvers will take Beresheet from an elliptical to a round orbit, at a height of 200 km from the moon. The maneuvers will aim to reduce the spacecraft’s distance from the moon and reach the optimal point to conduct an autonomic landing in the Sea of Serenity in the evening Israel time, April 11.

SpaceIL Chairman, Morris Kahn: “The lunar capture is an historic event in and of itself – but it also joins Israel in a seven-nation club that has entered the moon’s orbit. A week from today we’ll make more history by landing on the moon, joining three super powers who have done so. Today I am proud to be an Israeli.”

Morris Kahn is right to be proud of Israel. We have now joined the seven-nation club of moon-orbiters which includes the United States, Russia (as the USSR), Japan, China, the European Space Agency and India. The Times of Israel has more details:

Early on Friday morning, Beresheet sent back photos, one taken at a distance of just 470 kilometers (290 miles) above the moon’s surface.

On Thursday, Beresheet’s engineers executed the most complicated maneuver yet, a perfectly choreographed space hop allowing the car-sized spacecraft to jump from an orbit around Earth to one around the moon.

Watch this explanatory video by SpaceIL about the lunar capture:

Thursday was the longest period that engineers have activated the engines since the spacecraft’s launch on February 22.

Now drawn into lunar orbit, Beresheet will trace smaller and smaller loops around the moon before attempting to land on April 11 in the Sea of Serenity.

In total, the spacecraft has traveled around 5.5 million kilometers and still has about a million left to go. This is the slowest and longest trip a spacecraft has made to the moon. The distance from the Earth to the moon is an average about 385,000 kilometers (239,000 miles).

Beresheet, which means “Genesis” in Hebrew, lifted off on February 22 from Cape Canaveral in Florida atop a Falcon 9 rocket from the private US-based SpaceX company of entrepreneur Elon Musk.

What can one say but a huge kol hakavod to the whole team at SpaceIL who developed Israel’s spacecraft and planned the journey to the moon.

How proud we can be that in the same week we can uncover the distant past and blast into the distant future. Indeed we live in the land of miracles!

Tomorrow is Rosh Chodesh Nissan and we read Parshat HaChodesh, the Torah portion dealing with the preparations for the Exodus from Egypt, as we rapidly approach Pesach.

Israel is also approaching another “festival”, if that’s the right word, this Tuesday, in the form of our national elections. I have not written about these at all for the simple reason that I am still undecided between a couple of parties. I hope to cover this issue in the next couple of days.

Meanwhile I wish you and us all Chodesh Tov and Shabbat Shalom. May we have a quiet peaceful Shabbat and a happy and safe week.