What a week it’s been! The ups and downs of the elections – first with Benny Gantz and his Blue & White party seemingly winning the vote, then Binyamin Netanyahu overtaking him; Naftali Bennett and Ayelet Shaked being out, then in, and then out again (that’s a real pity); and then the excitement of the Beresheet moon landing – which crashed in the last minute.

Nevertheless, it’s all good. The elections, dirty as the campaigning was, and despite the claims of dirty tricks on all sides, were an exercise in democracy which would do any civilized nation proud, particular a nation under literal and figurative fire for every day of its existence. That’s while not even beginning to compare ourselves to our neighbours who don’t know the meaning of the word democracy.

So Likud have won, the horse trading will begin, and maybe Netanyahu will be indicted and maybe he won’t. But one thing we can be sure of: the State of Israel will continue to thrive, a military coup will not take place, and nor will a civil revolution upturn the results of the election.

Yes, we complain every day, and we have plenty of reasons to, from the lagging health care system to the sagging transport infrastructure. But we have so much to be proud of and to be grateful for. And our grandparents only 2 or 3 generations ago would have given their eye-teeth for a chance at governing themselves under a Jewish government in a sovereign Jewish state.

We can also be extraordinarily proud of our moon-shot, even if it did crash at the very last crucial minute:

The last shot Beresheet sent of landing before crashing onto the moon’s surface. (Youtube screenshot)

The Beresheet spacecraft crashed into the moon’s surface during its attempt to land on Earth’s satellite on Thursday evening, dashing the hopes of hundreds of engineers who had worked on the project for years.

The last pic of the moon snapped by Beresheet before it crashed, April 11, 2019. Photo via SpaceIL and IAI

“As far as we can see, we were very close to the moon,” operation control director Alex Friedman said to engineers in the SpaceIL control room in Yehud, east of Tel Aviv, after communication with the spacecraft went down. “We are on the moon, but not in the way that we wanted to.” [Talk about understatement!]

The spacecraft successfully initiated the landing sequence, but a few kilometers above the moon’s surface the main engine failed, meaning the spacecraft could not properly brake in time to cushion its landing.

Binyamin Netanyahu struck the right note with his hopeful tone:

“Write this down, in three years we will get another spacecraft on the moon, and this one will land in one piece,” said Prime Minister Benjamin Netanyahu.

“If at first you don’t succeed, try again. We’ll try again, and next time we’ll just try it more gently.” 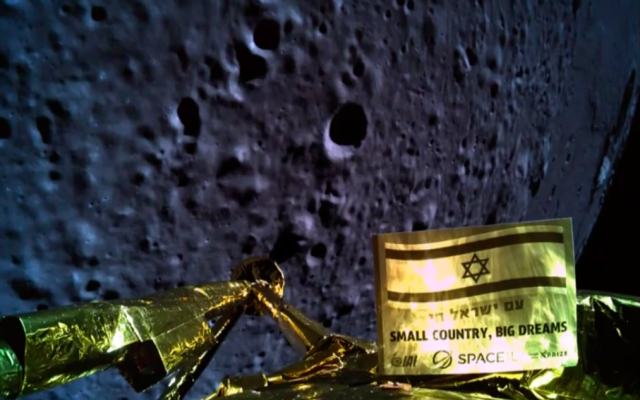 President Rivlin hosted a group of excited schoolchildren who watched the moon-shot live. He comforted their disappointment eloquently:

“We are full of admiration for the wonderful people who brought the spacecraft to the moon. True, not as we had hoped, but we will succeed in the end,” President Rivlin said, hoping to provide comfort and hope to his young guests.

The president did not hide the disappointment but said there was “no doubt that our achievements and abilities – of our scientists and our country – are wonderful.”

The president sang Israel’s national anthem, a song of hope, with his young audience.

“When we were children your age, we never even dreamed we would go to the moon. I hope that you will be the scientists who get to the moon and achieve even greater things. This is an important evening of the State of Israel and for Israeli citizens and children who can see what we can do when we want and try – so long as we work together,” he said.

Indeed it is this spirit of indomitability that is Israel’s secret strength. We don’t let failures stop us. We use them as learning experiences in order to make us stronger and improve our methods.

Melanie Lidman in the times of Israel wrote a very evocative piece on the flight failure of Beresheet – “for a moment we raised our eyes to the heavens”:

Somewhere, up there, are the remains of a crazy idea that was hatched by three friends at a bar in Holon, that somehow, along the way, garnered $100 million in donations, harnessed a team of dozens of engineers, and captured the attention of Israel and the world.

It’s the smallness I used to feel devouring my father’s battered copies of Isaac Asimov’s science fiction: how beautiful it is to dream about what can exist beyond our horizons. How crucial it is to remember how small and unimportant we are. How beautiful to know that there is more out there than what we can see.

There were many similar sentiments expressed on social media:

Even more than the strength to win, we need the courage to try, the willingness to fail, the readiness to learn and the faith to persist. @TeamSpaceIL may have ended up a few kilometres short of bringing #IsraelToTheMoon but we are so proud of their effort. #SmallCountryBigDreams pic.twitter.com/ZTlzAK8oeU

What could contrast our societal difference better?

We see a learning opportunity, and are proud of the accomplishment

They see a failure

In 3 years, we will be back to the moon

They will still be a failure

And this being Israel, there were all the self-deprecating and irreverent memes:

Whatever you guys hear… that's what we want you to think.
We're on the moon! #IsraelToTheMoon @TeamSpaceIL pic.twitter.com/NSMoLm2UiV

Israel made a dent on the Moon!!

Israel says its unmanned spacecraft just crash-landed on the moon, which is exactly what you'd *expect* someone to say if they are concealing a supply run to the secret Mossad lunar base.

If you are going to fail, do it spectacularly!
Average people might crash a party, we crashed the moon!

What did you do this week?#IsraelToTheMoon#Israel

There were many more memes and graphics doing the rounds on WhatsApp, too many to reproduce here. 🙂 But blogger Paula Stern has provided a pretty good round up on her post “Israel laughing its way to the Moon”.

But despite the failure, there was still some more good news to follow: The XPrize Foundation decided to award $1million to the Beresheet program despite yesterday’s failure:

XPRIZE will recognize SpaceIL’s achievement with a $1 million Moonshot Award for its successful entry into lunar orbit and for its attempt to land on the lunar surface – both of which are “firsts” for a privately-funded entity, marking a new era in space exploration.

SpaceIL’s robotic lander, Beresheet, Hebrew for “Genesis,” came very close to touching down on the Moon today, but ultimately failed to soft-land during its final descent. As it prepared for landing, Beresheet experienced a main engine failure and lost communication with mission control in Tel Aviv, suggesting the lander crashed into the surface.

“SpaceIL’s mission not only touched the Moon, it touched the lives and hearts of an entire world that was watching,” said Peter H. Diamandis, executive chairman and founder of XPRIZE. “The legacy SpaceIL will have on the future of the space industry is significant. This team’s ability to build a lunar lander for $100 million and less than 50 engineers is remarkable, a leap forward towards affordable and accessible space exploration. Congratulations to Morris Kahn, their primary benefactor, and the entire SpaceIL team for all their accomplishments — we are so proud.”

They may not have had a successful landing this time, but @TeamSpaceIL has still made history. They will be the recipients of our first ever $1M Moonshot Award, in honor of their achievements and their milestone as the first privately-funded entity to orbit the Moon. 🌒 #moonshot pic.twitter.com/ErUfjqvvxY

Kol hakavod to the XPrize Foundation for their generosity and for recognizing the importance of Beresheet.

And of course huge kudos and thanks to the entire Beresheet program, from the founder Morris Kahn, to the Israel Aircraft Industries, to the scientists, engineers and researchers who made it all possible.

May the next moonshot get all the way there in one piece!

You may be wondering from my headline what is the connection of the moonshot to Shabbat Hagadol, the last Shabbat before Pesach.

Pesach falls in the month of Nissan, called “the month of spring” in the Torah, and we are told that Nissan is the first of all the months. The months in the Jewish calendar are always marked by the first sighting of the new moon. Today, ever since Rabbi Hillel fixed the Jewish calendar in Mishnaic times, we have a calendar that we can follow and know exactly when Rosh Chodesh, the new moon, falls. But 2,000 years ago the months were announced only when a witness would get themselves to the Sanhedrin in Jerusalem and swear that he had seen the new moon. Then bonfires were lit on the hilltops, and thus the news spread quickly from town to town.

A friend of mine, Miriam Kresh, wrote on Facebook about those ancient traditions and yesterday’s moonshot, and made the connection which resonates so deeply with me:

Recently I’ve felt that Israel is living in an historical era much like that of the Maccabees. A tiny Jewish minority, standing against hostile giants determined to destroy us in our ancestral land. Now I wonder what our Maccabbean ancestors would have thought if they could have known that, unimaginable centuries later, their children would land an Israeli rocket on the moon. On the moon, whose earliest sighting every month established that month on the Jewish calendar; the calendar that the Greeks forbade. No new month, so no holidays to mark the points of the Jewish year. That’s what our enemies tried to erase, our continuity. But here we are, and we landed a rocket on the moon.

Sometimes it seems that Israelis are a little in awe of themselves, at what they have achieved. This week, from the noisy elections to the almost-success of a moon-landing, we have every right to enjoy that sense of awe and be proud of ourselves. And as importantly, we must give thanks to G-d that He has chosen our generation to play this hugely important part in this latest chapter of the unending story of Jewish history.

Shabbat Shalom to you all! Look up at the sky and see the new moon! Maybe you can spot some of Beresheet’s spare parts floating about. 🙂