While we were sleeping – or at least some of us, those of us who live north of Rechovot and Ashdod – our Israeli compatriots were living through another hell of Hamas and Islamic Jihad’s making. The terror groups shot over 300 missiles into Israel over Shabbat, and the shooting continued today (Sunday) bringing the total to over 600. But who’s counting any more? No one can keep track any more.

Even worse than the missiles, which by the way, as I type at almost 11 pm on Sunday are still being launched, four Israelis were killed in the missile attacks:

Rabbi Pinchas Menachem Pashwazman was killed by a rocket in the city of Ashdod, the fourth person killed in the current round of fighting.

When the siren went off, the deceased ran to a stairwell to take cover but was hit by shrapnel from the rocket. Rescuers who arrived at the scene attempted to revive him and evacuated him to the hospital, but he died of his wounds on arrival.

The deceased, a young yeshiva student in his early twenties, was a Gur Hasid. He was born in Beit Shemesh to a father who serves as a teacher in the local Gur community. He moved to Ashdod after he got married. His parents are originally from Monsey, New York, and the victim was an American citizen, according to a report by Yeshiva World News.

According to the family, this is the third time that the family has lost family members in disasters. His mother’s two brothers perished in disasters, one of them in a terror attack on a bus on Mount Meron, and the other in the Gesher Bnot Yaakov disaster.

He is survived by his wife and four-month old baby.

An Israeli man was killed earlier today when a rocket hit his car on route 34 in the south:

An Israeli man was critically injured Sunday afternoon, when a rocket fired from the Hamas-ruled Gaza Strip hit his car in southern Israel.

The incident occurred in the Shaar HaNegev district in the vicinity of Kitbbutz Yad Mordechai in southern Israel, when a rocket made a direct hit on a private vehicle, destroying the car and leaving the driver critically injured. Hospital officials at Barziliai hospital in Ashkelon later said that the victim had succumbed to his injuries.

He was later identified as Moshe Feder, 64:

The Israeli man who was killed earlier today when an anti-tank missile fired from the Gaza Strip hit his car has been identified as 67-year-old Moshe Feder.

According to reports, Feder was the partner of Iris Eden, who lost her husband Yashish Eden in the 1997 Helicopter disaster.

Last night 58 year old Moshe Agadi was killed in his home in Ashkelon:

An Israeli man was killed when a rocket slammed into his home in southern Israel early Sunday morning, as Gazan terrorists pummeled Israeli towns with projectiles and Israel responded with hundreds of airstrikes. 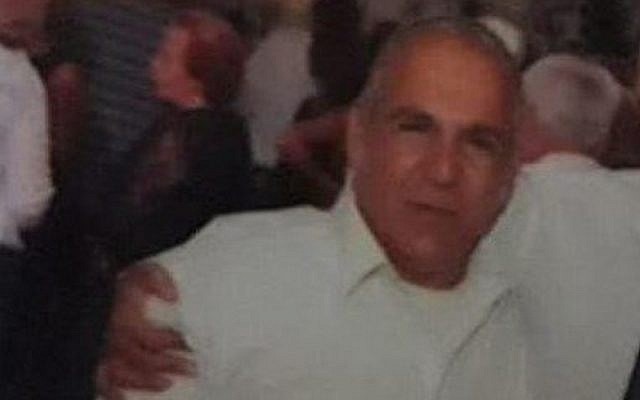 Moshe Agadi Hy’d, killed in a rocket attack on Ashkelon

The man, identified as Moshe Agadi, 58, a father of four, was declared dead after being rushed to Ashkelon’s Barzilai hospital with shrapnel wounds he sustained when the rocket hit his home in the city at around 2:30 a.m. Sunday.

This afternoon there was another Israeli casualty when a rocket hit a factory in Ashkelon:

In one barrage aimed at Ashkelon on Sunday afternoon, a rocket directly hit a factory, killing a 22-year-old man and injuring two others. One of the men, 40, was seriously hurt in the attack, with wounds throughout his body, the other sustained moderate injuries to his legs, medics said.

Update: the man who was killed was Ziad Al-Hamamda, an Israeli Bedouin. As Sussex Friends of Israel note, the rockets do not differentiate between Jews and Muslims or Christians:

May the memories of those who lost their lives be for a blessing and may their families know no more sorrow.

But in truth how can we comfort the families of those who were killed when we feel the army is not being given free reign to utterly crush Hamas and Islamic Jihad? What is the point of bombing empty buildings? And even when the army strikes arms depots and weapons factories – the question arises, if the army knew where these sites were (and they did), why wait for a war to attack them? Why not knock them out as they are discovered? I have yet to hear a credible answer and I am furious, once again, at our lily-livered government.

There have been dozens and dozens of injuries, not to mention immeasurable property damage as well.

Watch this short video of a new Dutch immigrant whose home was destroyed and yet shows such incredible bravery – and then has to rush to safety at the end:

WATCH UNTIL THE END
A Dutch Olah gets interviewed after her home gets destroyed by a Hamas/PIJ rocket.

Immediately after she says she is not moving anywhere, a very scary thing happens. #IsraelUnderFire pic.twitter.com/sWtWtyeSZF

I’m not going to even attempt to recap the events. All you need to do is open any Israeli newspaper, whether in print or online, or look at Facebook or Twitter. Search for the #IsraelUnderFire hashtag and you’ll have more reading material than you ever hoped to find.

On Twitter follow Joe Truzman who has some kind of “in” in Gaza. His timeline is fascinating and full of accurate inside information.

On Facebook join the Life on the border with Gaza group, or follow Adele Raemer for constant updates about life along the Gaza border. It has lots of human interest stories and other updates about the situation, as well as video blogs about living in such a volatile region.

On the internet, the Times of Israel has a live blog which is updated every day.

The latest update at time of writing, from the ToI live blog:

The Israeli military says it bombed some 40 “terror targets” in the Gaza Strip in its latest round of airstrikes in response to ongoing rocket attacks from the coastal enclave, bringing the IDF’s total number of raids up to 320 in the past two days.

As usual, our government has lost its collective mind as it allowed fuel into Gaza for humanitarian reasons. I say – when they act humanely towards us we can reciprocate. Otherwise, let them sit in the dark and stew in their own juice! I am furious (again!) at our leaders.

A nasty libel has been making the rounds of the media, claiming Israel killed a Palestinian mother and her baby in the fighting. First of all, even if that were true, collateral damage is not a war crime by the IDF. In fact, it is a war crime by Hamas who placed that family in the line of fire.

But more importantly, it simply isn’t true. The IDF denied any involvement and laid the blame on the Palestinians whose rockets fell shrot and killed their own civilians:

Israel’s army denied claims from Hamas-run Gazan authorities that an Israeli strike killed a pregnant Palestinian mother and her baby, saying a misfired Hamas rocket was to blame for the deaths.

“The mother and girl they’re claiming in Gaza that were killed in an (Israeli) attack were killed by Hamas use of weapons,” he adds.

Manelis is repeating a claim made earlier by the military’s Arabic-language spokesman that the deaths were caused by a failed rocket launch by terrorists within a civilian populated area.

Another military spokesman, Jonathan Conricus, tells journalists that based on intelligence, “we are now confident” that the deaths were not due to an Israeli strike.

“Their unfortunate deaths were not a result of (Israeli) weaponry but a Hamas rocket that was fired and exploded not where it was supposed to,” he said.

So what was the point of this whole round of fighting? Who can explain it? The answer is basically blackmail, as the Likud’s Gilad Erdan explains:

According to MK Gilad Erdan (Likud), Eurovision and Independence Day will play no bearing whatsoever on Israel’s response to terror groups. “The Independence Day events and Eurovision should not be a consideration of the intensity of the blow that the terrorist organizations in the Gaza Strip must absorb,” Erdan wrote on his Twitter account on Sunday. “Independence is not just plastic hammers or spray foam. Real independence is to fight back forcefully and allow the children of Israel and all of us to sleep peacefully at night.”

However, the timing cannot be ignored and the Gaza terror groups have made their intentions clear. Eurovision is scheduled to begin in ten days but the Islamic Jihad terror group is determined to change that. “We will stop the enemy from establishing a festival intended to harm the Palestinian narrative,” the Palestine Islamic Jihad (PIJ) said in a statement published on Saturday. “The resistance is obligated to respond to the enemy’s aggression and to surprise it.”

The PIJ’s threat is just the latest in a series of threats from Gaza terror groups to sabotage Eurovision. Last week, Channel 13 News reported that a Palestinian source told Al-Akhbar: “In the near future, pressure from the Gaza Strip will increase to the point that it might lead to the ruining of the upcoming Eurovision song contest.”

.
Last month, Kan News published a video on its Twitter account of Gazans threatening to attack Israel during the Eurovision contest if Israel didn’t give in to its demands and lift the blockade on the Gaza Strip.

And outrageously, it looks like we are going to give in. AGAIN! Egypt is trying to negotiate a ceasefire and no doubt Israel will accede. And then Hamas will fire off a few more missiles and as long as no one is killed Israel will swallow it.

Egyptian mediators are working to secure a ceasefire between Israel and armed terrorist groups in the Gaza Strip that will go into effect at midnight, according to reports in Hebrew and Arabic media.

Channel 12 news quotes Western diplomats as saying both sides were nearing an agreement.

Earlier, Hamas leader Ismail Haniyeh said that restoring calm in and around the Gaza Strip is possible if Israel agrees to stop all retaliatory strikes in the Palestinian enclave.

What is the MATTER with us?? I AM FURIOUS! We have no need to rush to a ceasefire. We have US President Donald Trump firmly behind us, even the Europeans have been condemning the terrorists and assuring Israel that we have the right to self defense (as if we need anyone’s permission). So what is this crawling to Hamas each and every time?

We let Hamas dictate the agenda, when our southern residents will be at peace and when they’ll be cowering in their shelters, when they can tend their fields or go to work, and when the region will be paralysed, when children can go to school and when they will be traumatised in their own homes.

The time is long past when Hamas and Islamic Jihad should be flattened along with any territory and fellow travelers in their vicinity.

But no one in Jerusalem is listening to me.